A full, plan free day in SD led to a trip back over to Little Italy for lunch at Ironside Fish and Oyster, preceded by bloody’s at the Waterfront, San Diego’s oldest bar, established in 1933. http://www.waterfrontbarandgrill.com/

As the name suggests, the Waterfront is about two blocks up from the harbor, a locale that attracted bawdy types in its early days. Now, it’s a warm, welcoming dive that serves a great spicy bloody 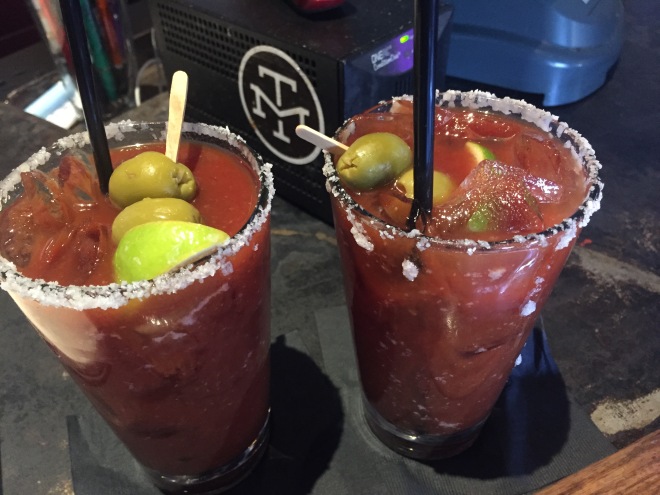 and attends to sports and entertainment needs, with TV’s, pinball, arcade games, and the like.

To whet our lunch appetite, we added one of the Waterfront’s surprisingly spectacular fish tacos, which came in a nice crisp shell, topped with a generous serving of luscious, full fat, sour cream and large grated strips of cheddar cheese.

The rest of the menu offers far more interesting choices than one would expect of a bar, with an array of both Mexican and American breakfast/brunches, traditional bar fare including corn dogs, nachos and wings, a choose-your-own-adventure grilled cheese section with lots of vegetable toppings from which to choose, as well as a selection of salads featuring ingredients like beets and Brussels sprouts.

No time for that though, we had a lunch date to make. Nautical is the theme over at Ironside Fish and Oyster, http://www.ironsidefishandoyster.com/ where instead of a living wall, today, there was an impressive array of piranha skulls (fake) topped by old timey boat travel valises, reminiscent of the titanic.

On the bar side, lit rows of octopus tentacles, and a marquee backed oyster bar

I’m particularly fond of that diving bell there on the end, because, the movie The Diving Bell and the Butterfly *sob.* The rest of the space, as you can see, is a multi-media display; a canvas of tiles, varying stools and seats, wood platforms, metal, glass, and bulbs.

On the menu, a raw bar lineup, starting with oysters, then graduating into uni, clams, muscles, shrimp, ceviche, and crustaceans, culminating with the giant combo platter option. On the hot/prepared side, a simple choice of fish and preparation; sandwich, salad, or plate. Past that, a list of entrée specialties, followed by sides, which we’ll get to momentarily. Our opener, a round of cocktails with a dozen oysters, served with mignonette.

I’m not some crazy oyster connoisseur, my feelings about the bivalves being fairly simple; I find them to be delicious as long as they aren’t not delicious. Eating a bad oyster is a heinous and traumatizing event, but that experience aside, with the exception of my beloved Olympia, which is truly sweet and exceptional, the rest of them all kind of taste the same to me, which is delectably oceanic, as these were.

Also, a plate of San Diego Uni, one of the sea’s greatest delicacies, but only when absolutely, just flexing its spikes a second before, fresh.  Years ago, on our honeymoon in Vietnam, Jake and I were treated to uni that had just been pulled from the water, watching as the boat crew cracked it open, dug out the insides (testicles, actually), and served it to us simply with lime and a little dish of salt and pepper. Eating that sea urchin, on that boat, on that balmy day in the South China Sea is one of my fondest food memories, leaving me to never pass up a fresh uni opportunity, which doesn’t come often. Most uni is frozen and not worth the box it was shipped in, but in San Diego, and I believe, Santa Barbara, it grows right off the coast.

We jumped across the grilled fish portion of the menu then, progressing straight into the specialties; first up, an order of chowder fries 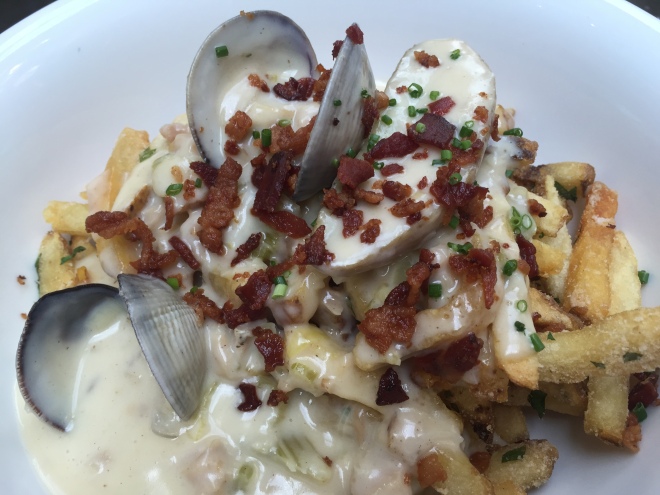 Which was, indeed, special; a mound of crisp, salty, hand-cut fries topped with creamy, rich chowder, clams, salty bits of bacon, and bright hits of chive. Following that, the brown butter lobster roll

While the chowder fries were special, the lobster roll was extraordinary. Whoever thought of brown butter mayo is a goddamned genius, even more so for mixing it with lobster and chives and loading up a malty, toasted, brioche roll with the stuff, then topping the whole mess with fried onion rings. Definitely the best dish we had in San Diego, but also, one of the most memorable dishes I’ve had all year. The depth of flavor present in that roll was a triumph of the culinary will.

Totally enjoyable, but I was still in the throes of lobster roll ecstasy…an impossible act to follow. IF&A really impressed. I would have loved more time and/or more room in the tummy, but alas, we were all beyond stuffed and it was time to go digest back at the Waterfront, where, in an act of true, unrepentant gluttony, we dug in to one last fish taco. We did wait an hour or so before ordering. I think. 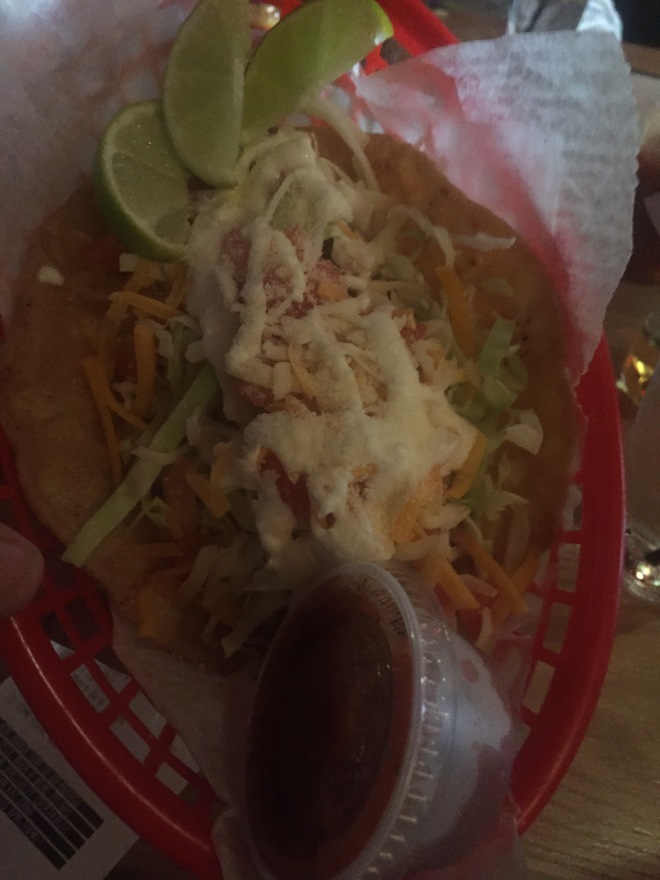 As evening rolled around, we journeyed back to where it all began, four days earlier, at Point Loma Harbor, to a previously unvisited bar/restaurant, the aptly named Harbor Town Pub. http://harbortownpub.com/ 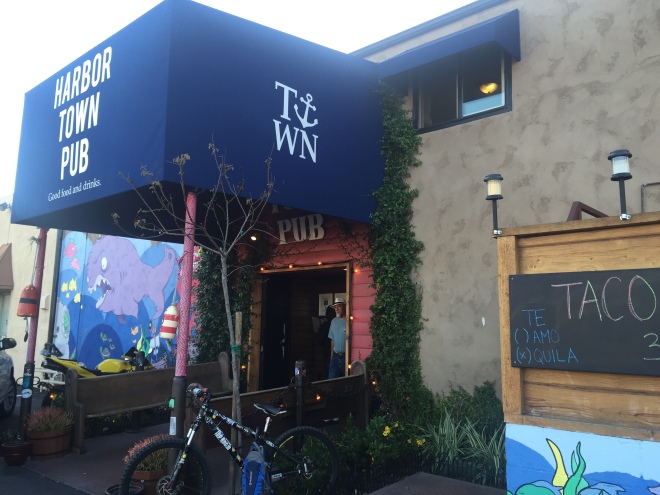 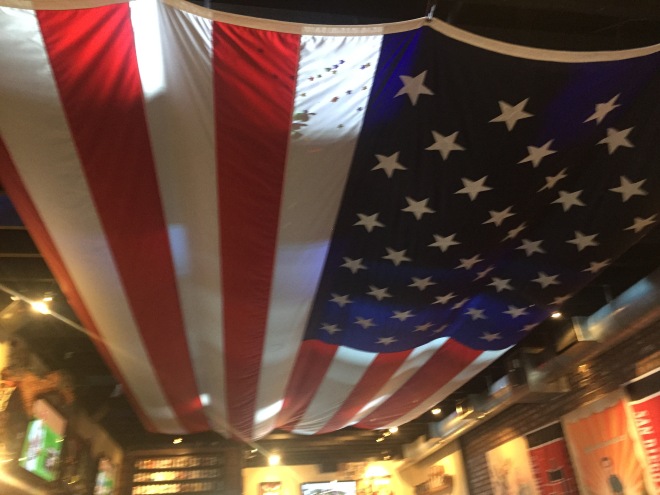 There was nothing particularly exciting about Harbor Town, just your average bar doing its average thing, with local beers on draught, but of course. The menu is a collection of bar food options with little twists and turns, like the “pho-king amazing” roast pork sandwich, which is a riff on a bahn mi and has absolutely nothing to do with pho. At any rate, we were in snack mode at this point, so we opted for the grilled ginger soy chicken wings 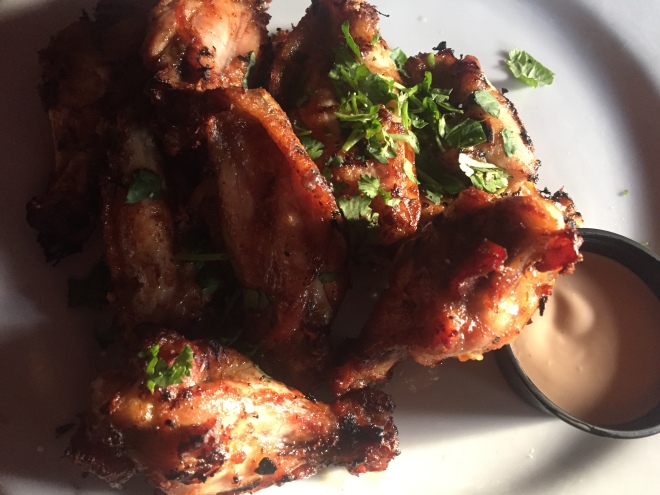 Which were…OK. Grilled wings are awesome, but these had some flab going on; always a giant turn off. Second, an order of the BBQ Pork Nachos

Which were pleasingly covered in a cheese sauce and definitely more satisfying than the wings, though the pork skewed a little too far to the sweet side.

In the end, we made on fantastically bad last call with a pizza order placed at Roasario’s, one of the only late night delivery options near our Point Loma condo. http://www.rosariaspizzaoceanbeach.com/

I think it’s fairly clear from the photo that there was nothing pleasant or satisfying about the “Italian” salad, unless you’re the sort of fellow who enjoys ripped bits of iceberg lettuce topped with black olives, unripe tomatoes, and a third of a raw onion thoroughly dusted with dried oregano. If that’s you, then, by all means, the “Italian” is your jam.

Our salami and black olive pizza fared a bit better, but not by much 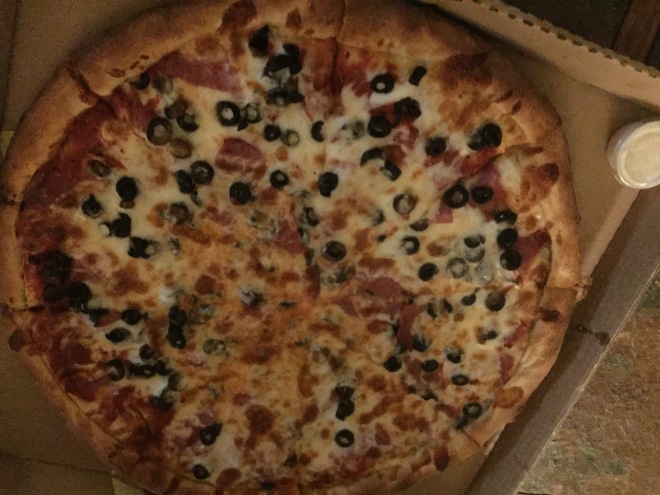 With a bloated, bleachy crust, overly sauced and cheesed to the effect of soupiness in the middle. Of course, no trip would be complete without at least one serious disappointment; as far as those go, we have done, and will do, far worse than this.