Bogota is rife with hiking opportunities, both within the city limits and in the surrounding countryside. There is the acueducto trail that starts, fittingly, at the aqueduct on the city’s edge, canine friendly trails, waterfall trails, rock climbing havens, and Soacha, a cloud forest located about an hours drive away.

The acueducto is supposed to reveal spectacular city views at hikes end, but there are logistical issues that can be problematic; hikers need to arrive at 6AM to begin the trek, and, the trail is only considered safe during the weekend, when the police are present.

We chose instead to commit a full two days to Chicaque, a national park in the Soacha cloud forest. I made the Chicaque arrangements by phone, from my desk in San Francisco, foolishly thinking that my newfound, extremely limited Spanish skills would be sufficient. They were not, by any means, sufficient, and in the end, I emailed (with the help of google translate) and all was well. Moral of the story, if your Spanish registers at the intermediate level, do yourself, and the staff at Chicaque, a favor, and put your request in writing. http://www.chicaque.com/

For our morning preparations, coffee at Amor Perfecto, a renowned cafe/laboratory. http://cafeamorperfecto.com/

In the background, the ever mysterious coffee lab, where, if one were so inclined, one could receive a coffee education of some sort, but alas, committing vacation time to classes of any kind is taboo in our book.

We opted for a delightfully odd “bagel,” soft, sweet, and chewy; a carbwich that by another name (such as carbwich) would make for a fine snack.

Amor Perfecto is a sweet, meticulous, and cozy little spot, full of wacky machinery, caring owners, and, best of all, single malt whiskey pairings which is a significant draw to folks like me who abhor “going out for coffee.”

Back in Chapinero Alto, about a half mile from that particular Amor Perfecto, we stopped for a relaxing nibble at Mistral Panaderia’s idyllic patio, soaking in the scenery along with a sugary, flaky, kouign aman, topped with gooey strawberry jam. http://lartisan.co/ 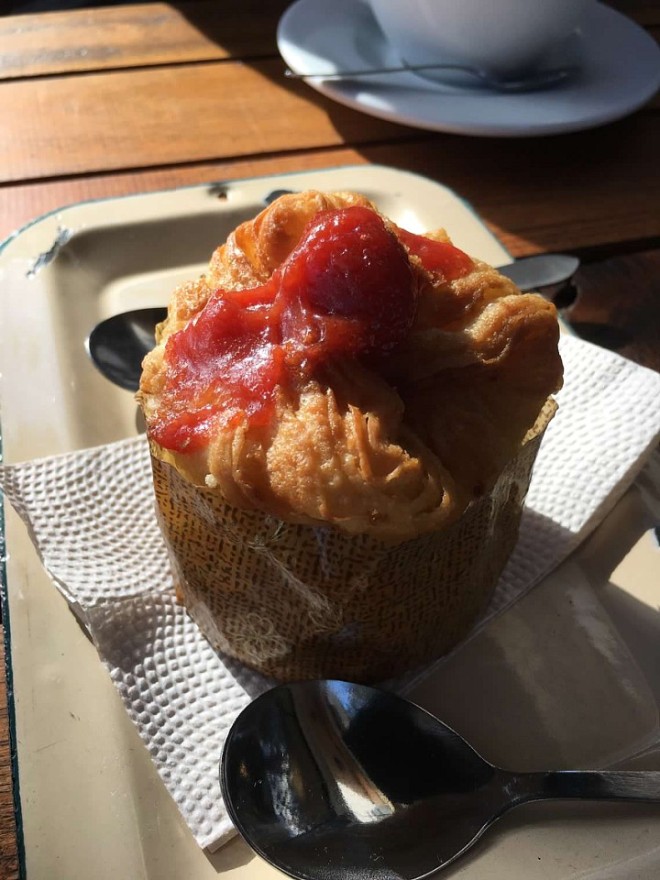 Our Airbnb host arranged transportation for us to Chicaque (return trip as well, bless him), a journey that took closer to two hours than the sixty minutes I was expecting. The route took us through the city, past outlying industrial towns thick with diesel and dust,  then up the mountain, where the single lane, curved road was inundated with work crews and lane closures.  As we ascended into the clouds we began to see large, verdant, fields, and then finally, we made a turn onto a dirt road with rambling homes and livestock along either side; residences, I assume, for park employees.

Eventually, we pulled onto a platform, a humanless cloud scape, nothing in sight but an abandoned entry gate. We wandered aimlessly, unable to ascertain where we should go to find a person; soon, a woman emerged from a home atop the hill, looking more like she was there to shoo us away than to facilitate our arrival. Surprisingly, she walked into the empty kiosk, and we began our exchange, entirely in Spanish. 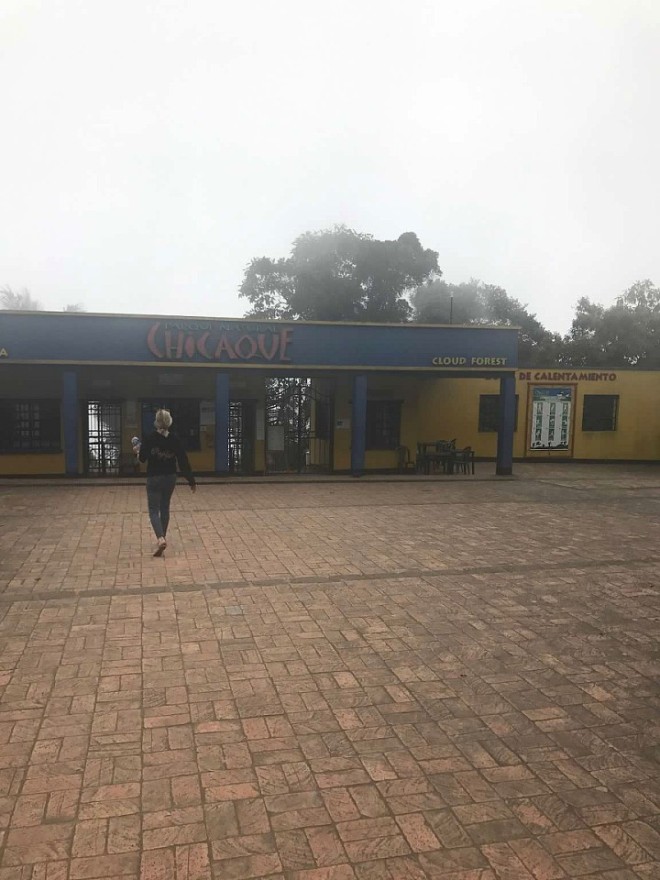 I was able to surmise that we did, in fact, have two cabanas waiting for us, somewhere in the clouds, but where was anyone’s guess. She gave us wristbands. She click clicked at our choice of footwear (sandals) which prompted us to take a moment to fish around in our luggage for hiking boots, which pleased her (for VERY good reason).

She led us around the kiosk to the top of a set of stairs, wherein she unleashed a monologue of rapid fire instructions, directions, it would seem, to our final destination. Jake (who speaks kitchen Spanish) and I (duolingo) came to the same understanding which was, essentially, walk until you see a sign, make a right, walk until you see another sign, make a right, keep walking until you see the refugio. There was a lot of other information in there, information that I now know would have been very handy, but alas, we struck out on our walk, blissfully unaware that the concrete steps

would soon devolve into a concrete driveway of sorts 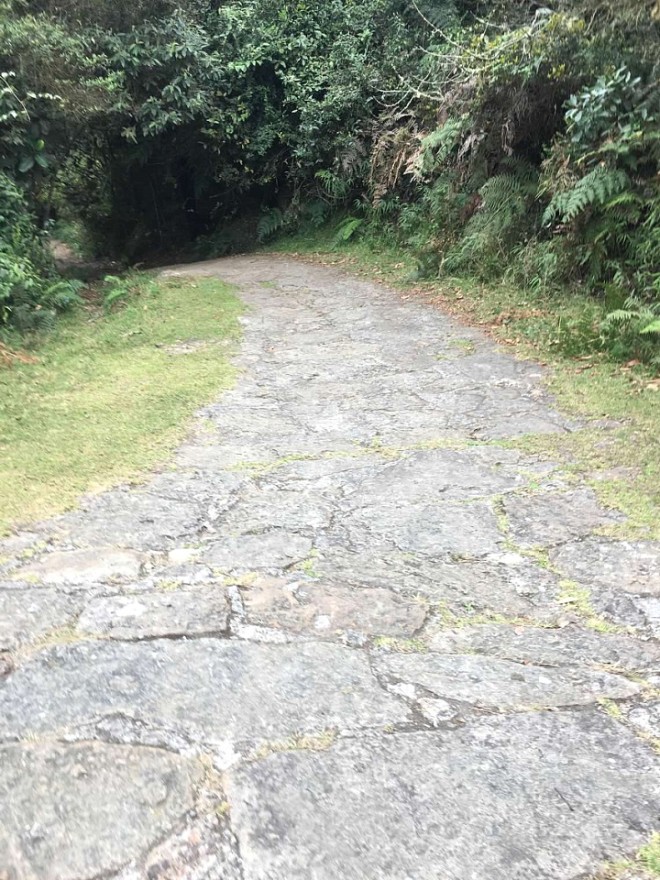 That gave way to a ruin-esque set of stairs

Which then ceded to a dirt trail, adorned with slippery leaf carpet, but not to worry, there was a PVC pipe waiting and ready to provide first aid. 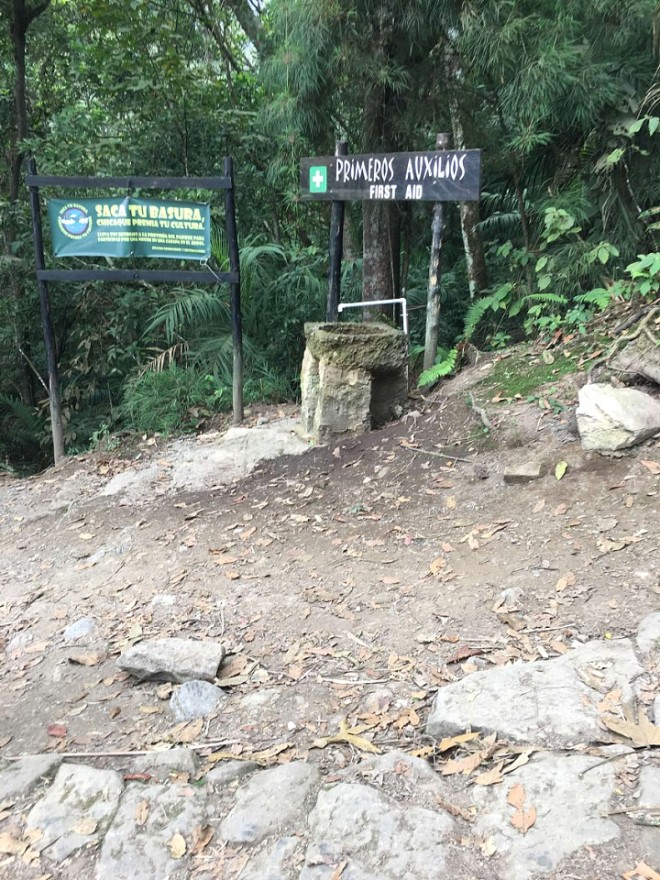 Eventually the leaf carpet morphed into a dilapidated staircase 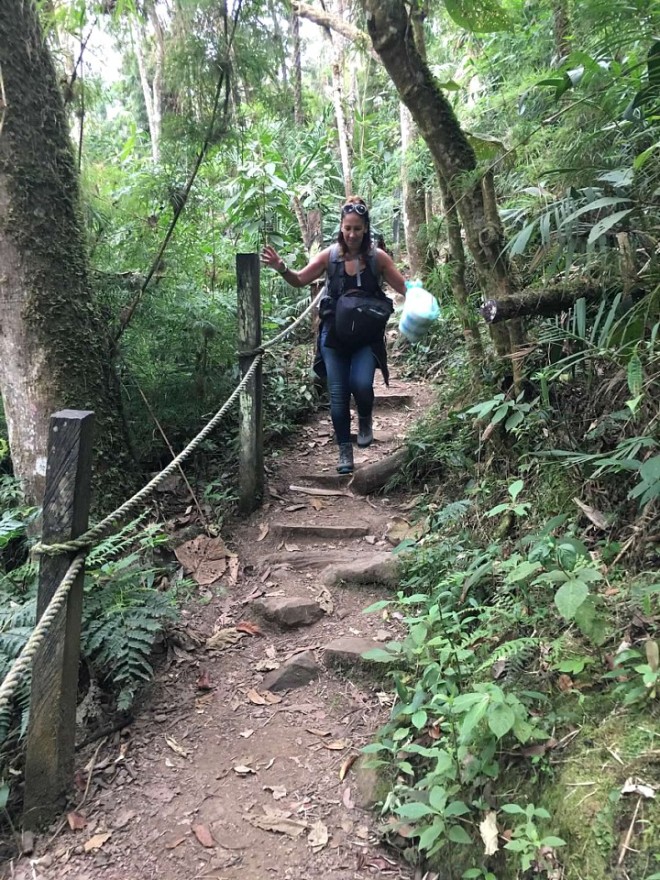 and then the trail suddenly give up all pretense of ease and/or safety and flung itself into a steep descent full of deep lunges and thick jungle.

From there, the least sporty of the group took the front, from where I heard a stream of consciousness, a river of “oh shit! Oh god. Oops! oh my god. Oh no. Oops. oh shit.” To that, there was Mikey’s knee replacement coupled with his bad vision (took his time and did it quietly). And finally, my husband, who continually erupted with the pronouncement that “we’re getting airlifted out of here, I’m not walking this again.” For my part, a distance runner, my legs began to tremble uncontrollably. The moral of THIS story is, do your research prior to arrival, as I’m absolutely positive that horseback and possibly even automobile, were options. 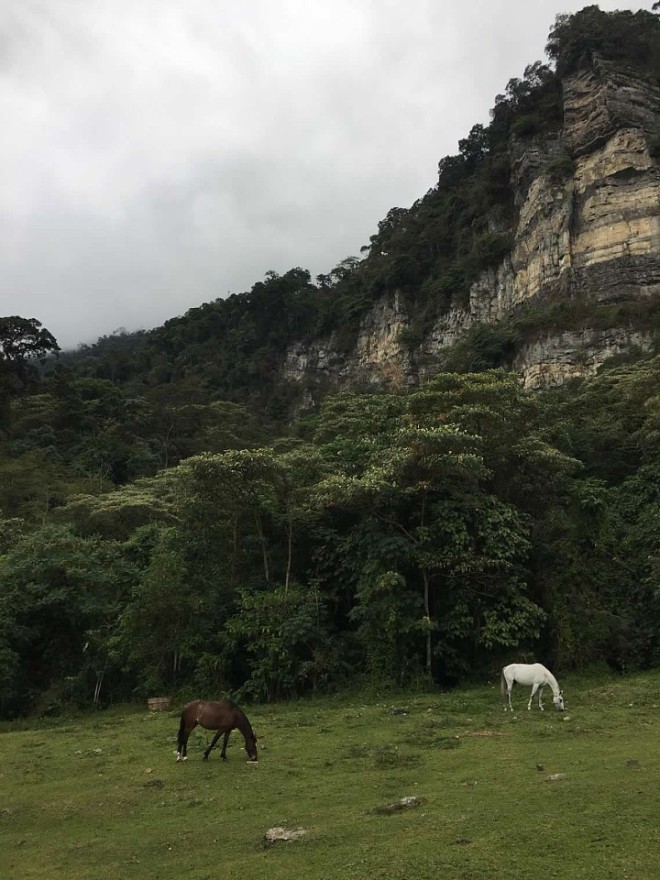 It’s hard to overstate the sense of relief and joy that was felt when we came to the hikes end, where the jungle opened into a grassy valley, a scene dotted with roaming alpacas and grazing horses, our sweet little cabins, and our first view of the main house, the aptly named “refugio.” 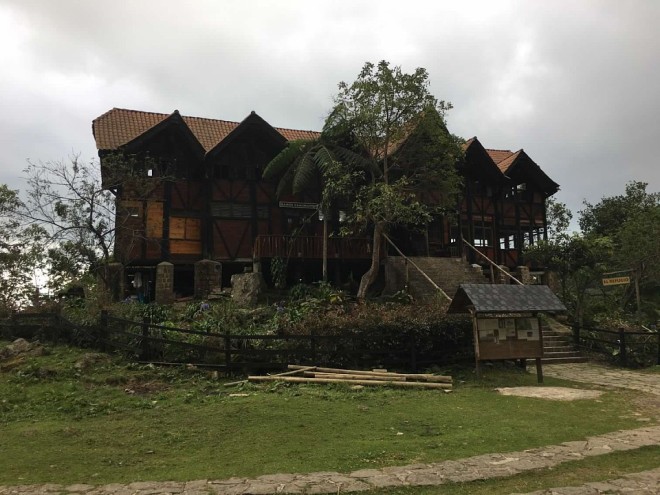 We lurched into the refugio, all sweat and incredulity, a bizarre sight to the staff relaxing for the afternoon in the dining room.  It became increasingly clear that the typical route into Chicaque, with overnight bags, was not the hike we had just completed.

Back in Bogota, we had bought some sandwiches, in case a crisis of hunger struck, and while it seemed a bit foolish at the time of purchase, we deep-throated them there in the lodge. The staff kindly brought us juice to facilitate the movement of said bread logs. 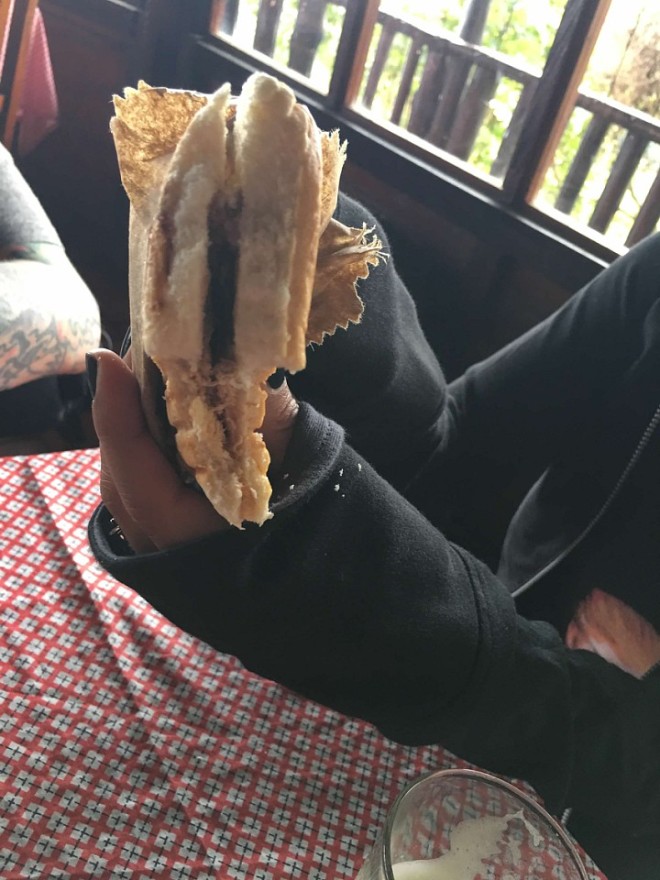 Eventually, we were approached by a staff member who was to get us settled; Rosa, the wearer of all hats at Chicaque. Rosa led us to our cabins and explained that she would tend to the rooms and light us a fire, each night at 5:00. Also, a warning not to wander on to the trails past sunset, which, all good Rosa, no interest. 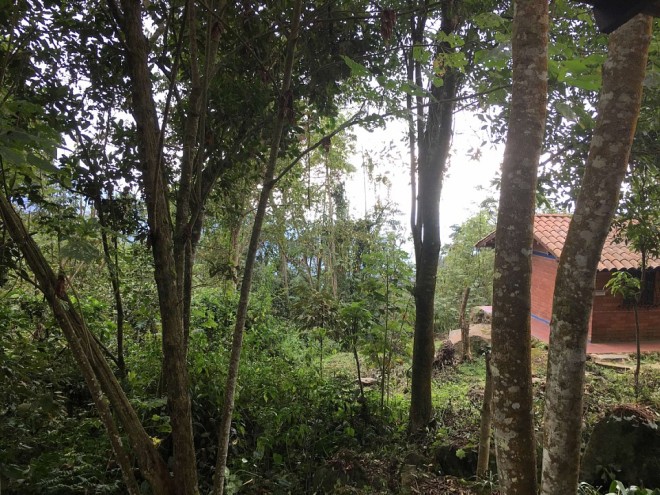 The cabins were nicely outfitted with a mini-fridge, snacks, a nice enough bathroom, a small closet, a table for two, a fireplace, firewood, thick wool blankets, and soft, warm beds. 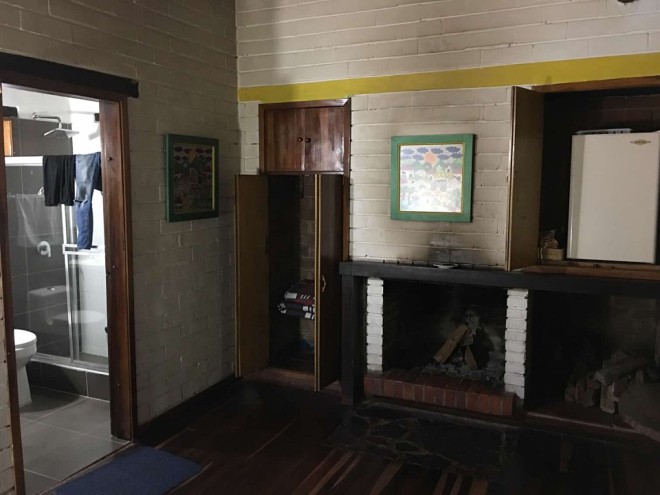 After a bit of wandering to the start of the four trailheads, we put on our sweats and headed to the refugio to play cards until dinner.

Blessedly, they stock the refugio with pints of aguardiente and Victoria beer (i.e. no need to bring your own).

Around 5:00, Rosa appeared as promised to take our keys and prep our cabins for the evening. A fire was started in the refugio (as it was both nights of our stay) and the sun set magnificently over the mountains. 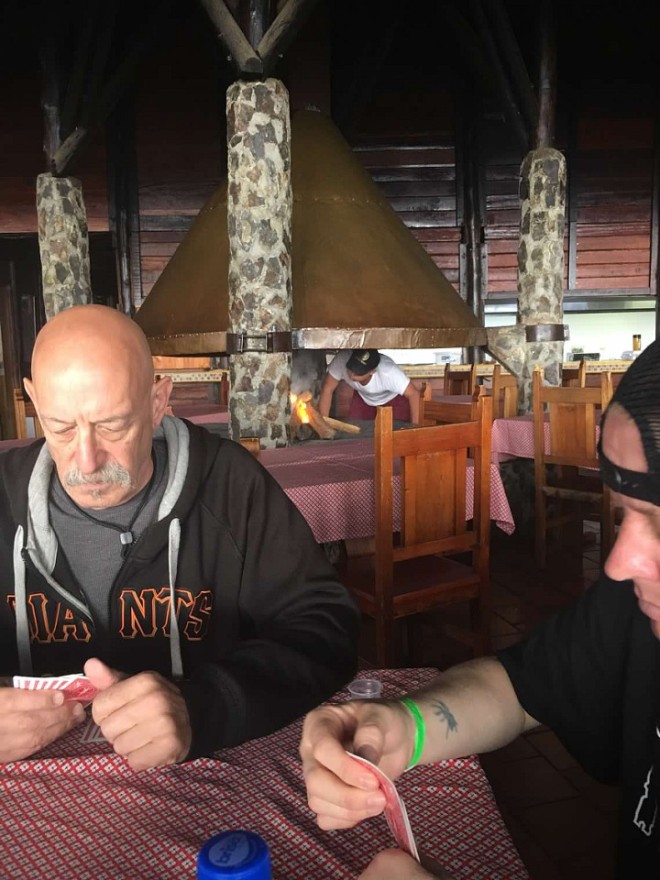 I’m not sure there is a better antidote to city travel, or life in general, than sipping Colombian beer by a fire, playing cards, and gazing over the massive jungle, thick with clouds and bird calls.

Our dinner that night was a sort of loosely wrapped burrito, an open-ish tortilla holding stringy beef and vegetables that had an oddly cat foodish taste.

I devoured the entire thing, along with the potato soup garnished with chips that preceded it and the giant fries that accompanied it.

They feed you heavy activity, high calorie, stick to your bones meals at Chicaque, and I couldn’t have been more grateful. In addition, there is always, and I mean always, fresh squeezed fruit juice with every meal. 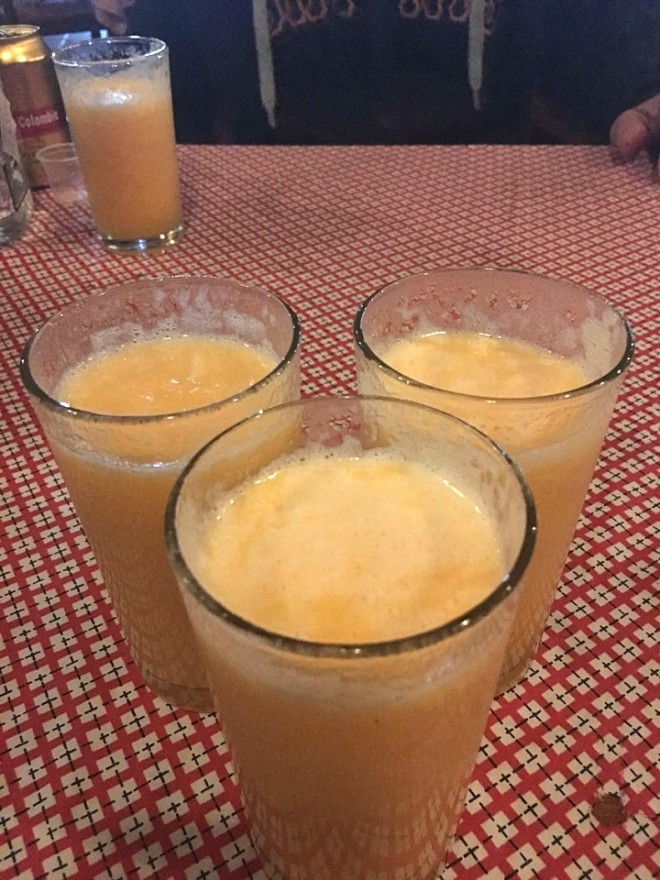 Content that I would be well fed over the next couple of days, I threw my weary body into our soft, warm bed, and slept to the sounds of crackling wood and a breathtakingly massive, jungle deluge.