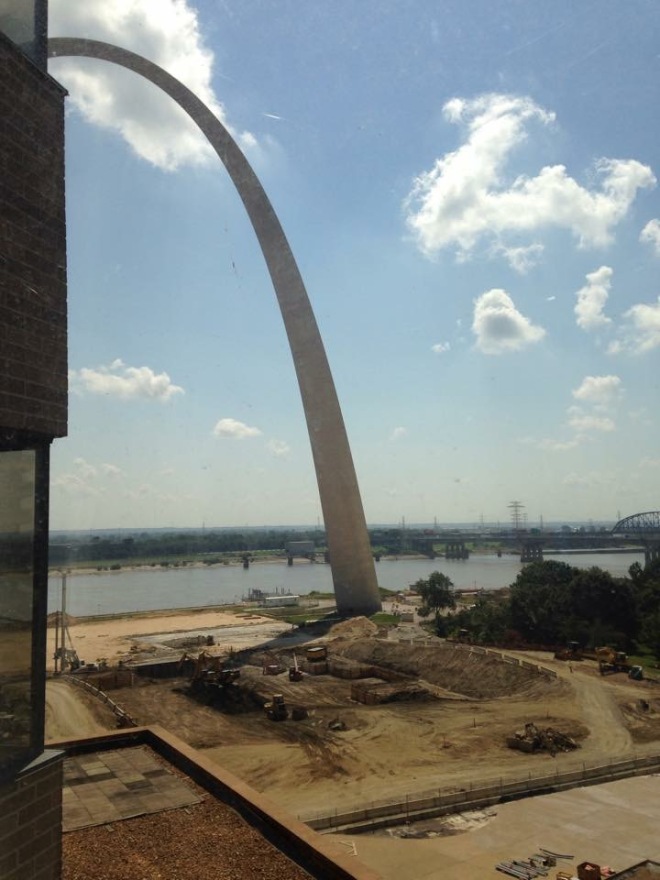 St. Louis: The Journey into the Belt

When I told people of my summer vacation itinerary, St. Louis, followed by a sojourn into Dubuque, Waterloo, and Des Moines Iowa, the news was invariably met with a hard swallow and an uncomfortable smile, finished with a long, slow, “coooool…” followed by a change of subject. The promise of world class people watching, political/religious culture shock, and fattening, down home, foods was a good time guarantee, but somehow, let’s just say, the idea did not seem to resonate beyond my travel group. The most relatable part of the whole itinerary was the St. Louis portion, most specifically because we would be watching the Giants there. It was the one thing people would grab on to, with an excited lift of the eyebrows, loudly exhaling a relieved “OH!” like our trip made some sort of sense in that context.

Flying to St. Louis from SFO is most logical via United, which if you are familiar with this blog, is never, ever, preferential. It was the most direct and economical; I’m not ready to pay hundreds more or travel hours longer just to avoid flying with that worthless airline. Not yet, anyway. The silver lining is, United domestic calls terminal 3 home, where palatable food options abound, as opposed to the dreaded international terminal, where culinary dreams go to die.

At Emporio Rulli, http://www.flysfo.com/content/emporio-rulli-gran-caffe we started with a completely edible prosciutto and brie panini

then sent half of our crew on a scouting mission for the best possible in-flight meal they could muster. They made good returns, with an Andale carne asada super burrito http://andalemexican.com/locations/sfo-terminal-3, served with a side of chips and specimen cups of guac and pico, along with a box of assorted sushi from Tomokazu http://www.flysfo.com/content/tomokazu-0. I hadn’t felt this hopeful about eating on a plane in a long time.

When it did finally happen, I was a little beside myself with excitement, photo duties recklessly cast aside. 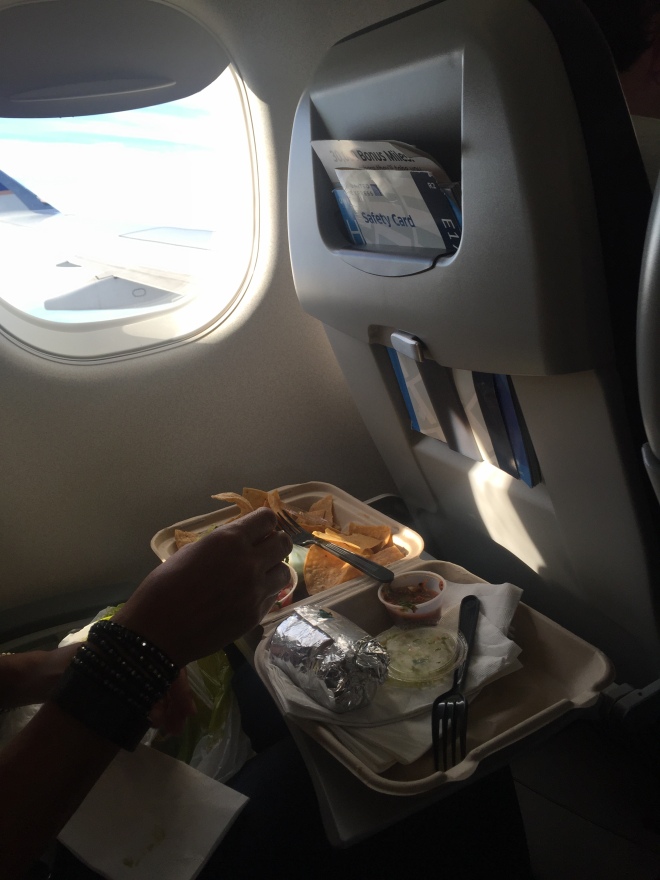 Ah, the bliss that comes with not eating a $9.00 box of “tapas.” Also, sushi and wine. If United actually supplied in flight entertainment at no cost, this would have been a truly pleasant flight experience. 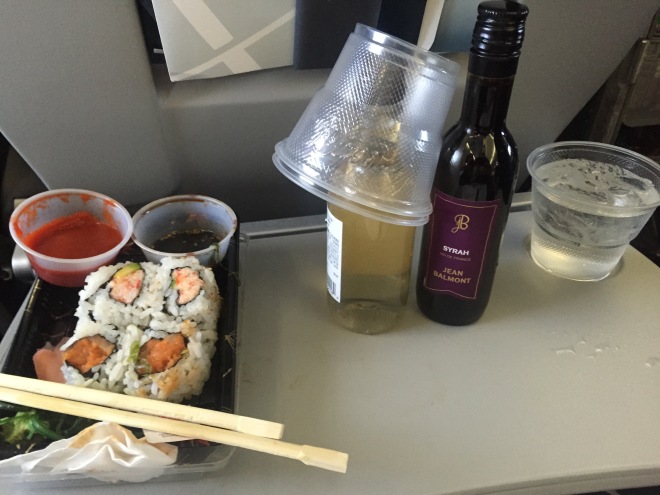 but of course, they do not. 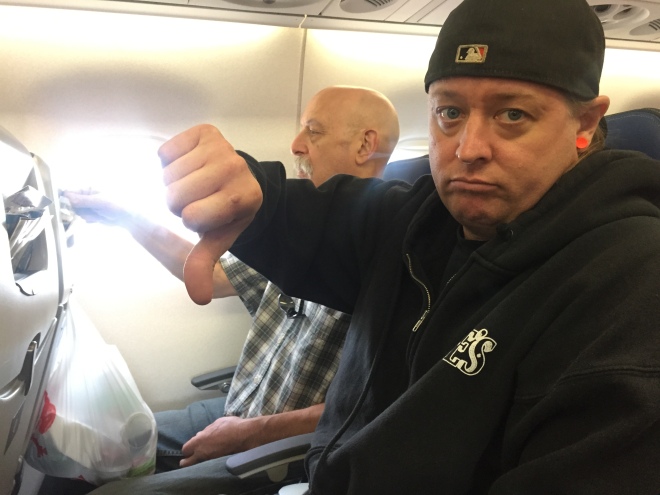 In front of us, a man read diligently, this illustrated guide to the ever elusive, perfect handshake. 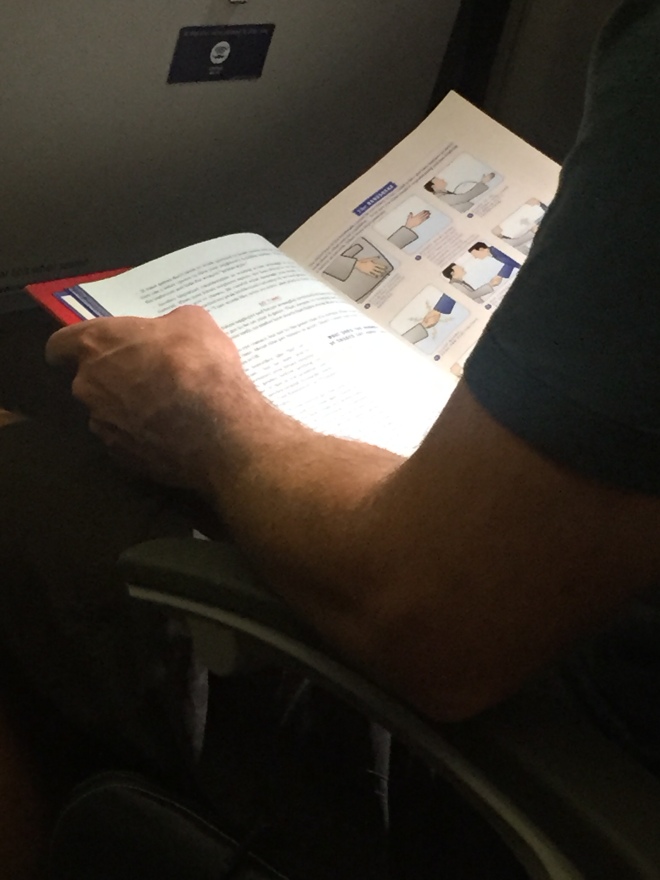 So, there was some free entertainment.

Our St. Louis touchdown occurred just after the local clock struck midnight, leaving us only with the option of cabbing or shuttling to our hotel, the Hyatt Regency at the Arch. The ride, from Lambert to downtown lasted somewhere in the neighborhood of twenty minutes. Signs are clearly posted all about the airport, warning travelers that the fare should run them roughly $40. One oddity, in St. Louis, is that cab meters start with a surcharge for additional passengers; passengers in addition to the first, that is. I guess they are trying to account for the extra weight? The four of us were dinged an additional $3.50 before the wheels ever got rolling, on all trips in Missouri.

The Hyatt at the arch is suitably named, located within steps of the monument, and also, conveniently, a  few, short, walkable blocks from the ballpark. http://stlouisarch.hyatt.com/en/hotel/home.html One item of note, the city is in the midst of a construction project,

as they build what will be known as CityArchRiver park, an outdoor expanse at the base of the behemoth “with biking and running trails, space for outdoor concerts, art installations and a new museum commemorating westward expansion. “http://www.cityarchriver.org/, which translates loosely to, “you will be woken up by construction noise fairly early in the morning until some unforeseen future date.” The noise wasn’t terrible intrusive, but, it was a reality. I’m sure we have that project to thank for our reasonable room rates; totally worth a little morning clamor. For now though, it was night, and the arch glistened and shone, as though it were wearing some sort of shimmery evening gown.

As for the Hyatt, it serves as a great home base for anyone traveling to St. Louis for baseball, or for anything else for that matter. It’s right downtown,  possessing a well-appointed gym, a sports bar, a wine bar/restaurant, a Starbucks, a Ruth’s Chris, and, the dreaded Enterprise Rent-a-Car (more on that later). The front desk directed us to Mauricio’s, one of the only local late night delivery options. http://mauriziospizza.com/ 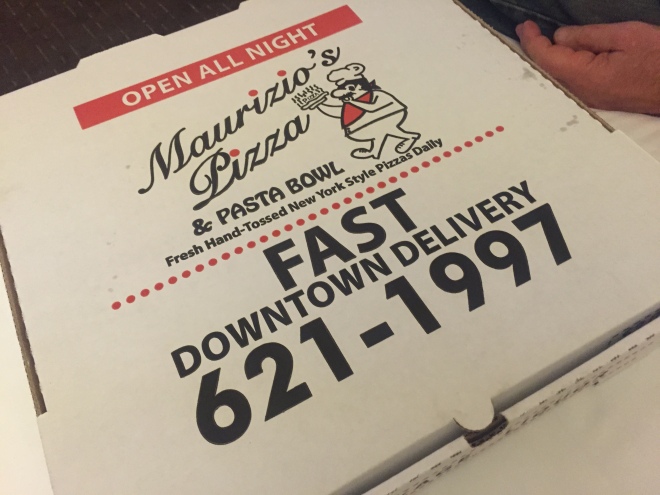 One half hour and a trip to the lobby later (hotel doors auto-lock at night, so delivery drivers must be met outside) our large half pepperoni, half mushroom pizza had arrived, perfectly delivery pizza-esque and satisfying as can be, with a too sweet, too bloated crust, and a nice, even layer of hot cooked cheese. 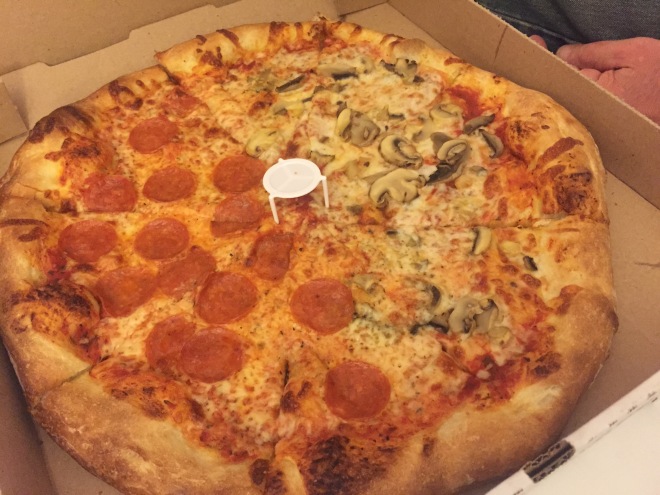 With it, a twelve pack of…Busch. So, that’s a problem in the Midwest. Craft beer is definitely a thing, but it’s not ubiquitous like it is on the West Coast.  The risk of being offered of only low quality, high production domestics like Bud, Bud Light, Miller, Miller Light, Busch, Busch Light…you get the gist, is a constant one. 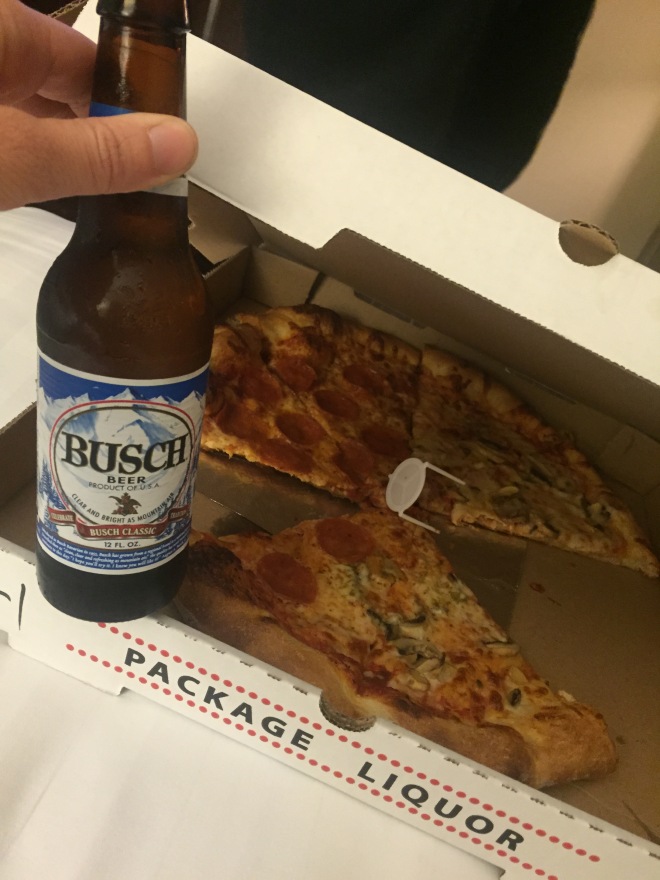