San Diego: The Patio at Goldfinch and the Renaissance of Tijuana

Something incredible is happening in Tijuana; a culinary renaissance of sorts, though culturally, it appears that much has remained the same. There are still atrocious warehouse bars serving jello shots, tattoos, and rides atop a mechanical bull. One can still purchase a “margarita” full of sickly sweet mix and a thimble full of tequila, then head to the nearest pharmacia to procure a year’s worth of viagra, vicodin, and muscle relaxers. But something else is in the mix now. Something completely unexpected and rather extraordinary, restaurants and craft brewery’s with the look, feel, and product of sophisticated, metropolitan cities.

The trolley journey from SD to TJ is too long upon which to embark on an empty stomach, so first, brunch at the Patio on Goldfinch in San Diego’s North Park neighborhood.

one of the lovliest restaurants I’ve ever been to, thanks in large part to that crazy lush living wall back on the “patio,” which is an enclosed area with a…glass? roof. 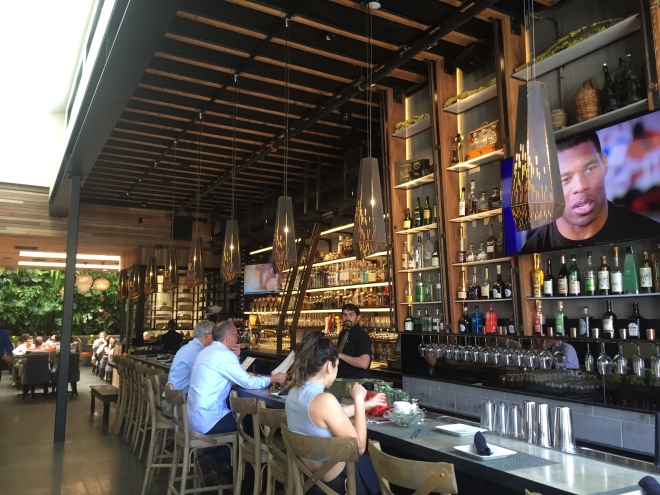 Living walls are kind of the thing right now, and that’s pretty awesome, but this beauty was particularly over the top, with its bounty of ferns, lilly’s, tropical flowering plants, and overall lush greenery.  That wall put us in a mood, filling us with a confidence that the meal we were about to have would be spectacular.

And then, our cocktails came; each and every one, too sweet, unbalanced, and for the spicy drinks, not spicy. Confidence waned. 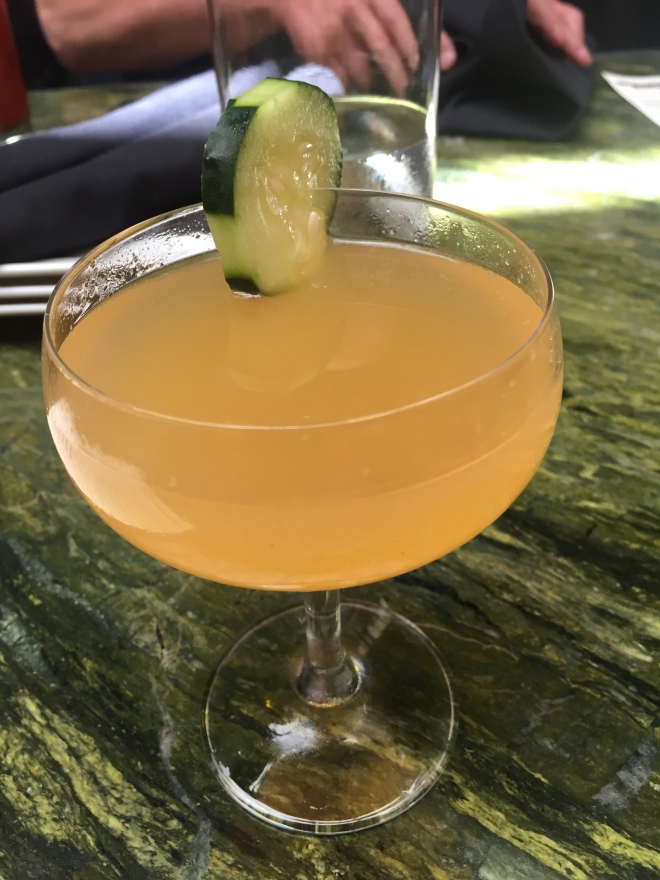 Our decomposed waldorf came, as beautiful as the plant wall behind us, a narrow row of panna cotta celery mounds, subdued in flavor, sprinkled with candied walnuts and raisins.

The carnitas flatbread with lime cream, pickled red onion, and jalapeno tasted just as it should have, if not a little dry and in need of salt. It was tasty, but not spectacular.

Ditto the fresh fish, which was grilled, nicely browned, a little crisp on the outside, moist on the inside, served atop a bed of heirloom tomatoes and arugula on an asiago crusted sourdough base; a very simple and straight-forward dish. 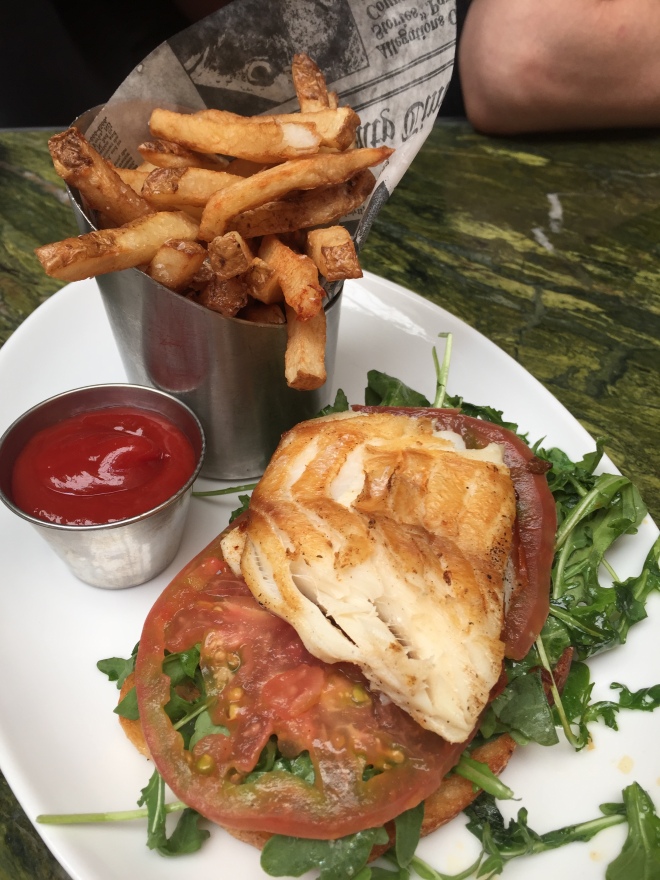 Roast brussel sprouts and/or cauliflower are a staple in my home, a favorite of mine that is damn near impossible to ruin. Their version comes tossed with honey and sriracha…a lot of people like the addition of something sweet to balance the hearty, nutty taste of the cruiciferous veggies but I prefer them without 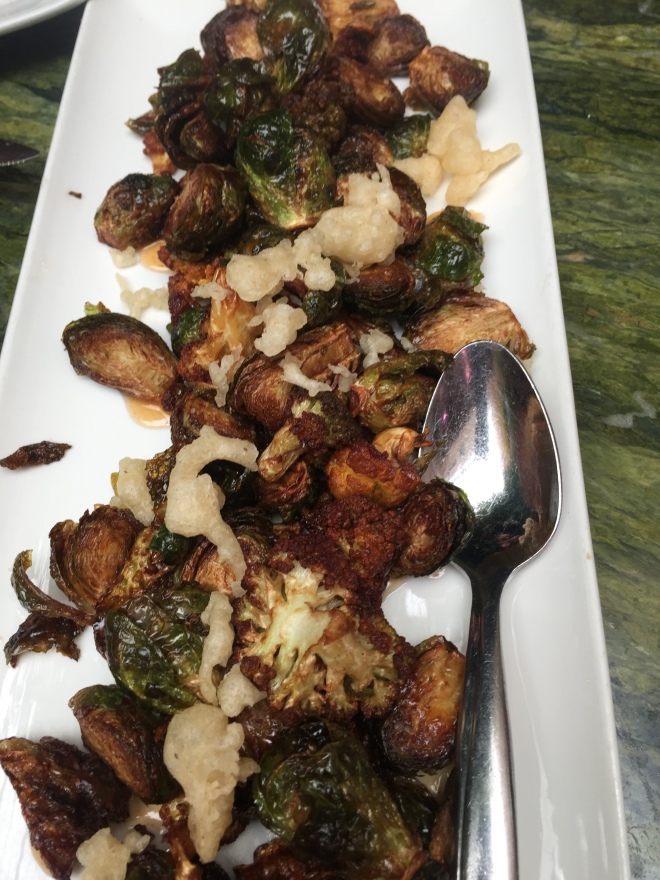 In the end I was more impressed with the décor than the food and drinks, though if I lived there I would definitely go back for another shake, as the patio does get rave reviews

The journey to Mexico, by train, first required a return to the train station outside of Petco park (though you can just cab straight to the transfer station). Heads up, if you need to use the restroom at that station, and I did, there is all manner of nonsense, including a trip through a metal detector (made slower on that day by a person who dumped all of their worldly possessions on the belt and then argued about the contents while we all had to wait). I highly recommend relieving yourself before you reach that station.

Then, a transfer at “Old Town Station”

Where things start to appear a bit skeevier. The ticket situation proved a tad confusing as two different types of trains service the station. For Mexico, choose the all day ticket from for the EBT train. 45 minutes later, along a route traveling down the socioeconomic ladder, comes the border stop, where signs abound with arrows pointing the way to Mexico.

Though now that I think of it, this crazy menacing tunnel is probably all the indication one needs 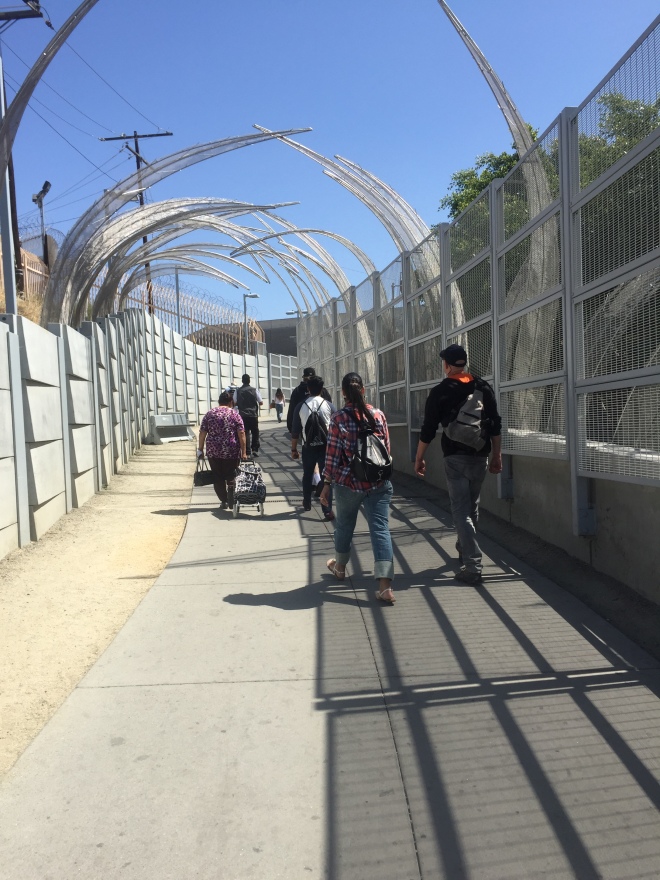 And then, without much fanfare, Mexico.

A randomized button pressing system sits inside the door, manned by federales in military gear holding AK’s. You press a button and then a giant traffic light turns either green (you may proceed) or red ( you must stop and be searched). Passports don’t come in to play unless you are trying to enter America.

Once in Mexico, we were greeted with an hour long line of people waiting to get into the US, the smell of turd, two paths lined with tchotchke selling vendors, and non-working cell phones. All of my notes, every restaurant, bar, and brewery of interest, were up in the cloud, completely inaccessible to me; a rookie move deservant of a Darwin award.

The path with the overpass led to a line of taxis, where they were happy to load five of us into a tiny car meant for four passengers, and zoomed us off to “downtown,” otherwise known as “Avenida Revolucion” or, the more aptly named, “tourist zone.” This, of course, is when things got shitty.

Exiting a cab on the Avenida means being immediately and relentlessly implored to “come into my shop” and “take a picture with my donkey” and “lady, jello shots in here.” In short, it is the absolute WORST.

One place promised us wifi, which of course they did not have. None of them have wifi on that street. NONE OF THEM. The place we entered literally rang a gringo sucker bell when we walked in. These five margaritas cost around $2 and contained perhaps a splash of tequila in them collectively 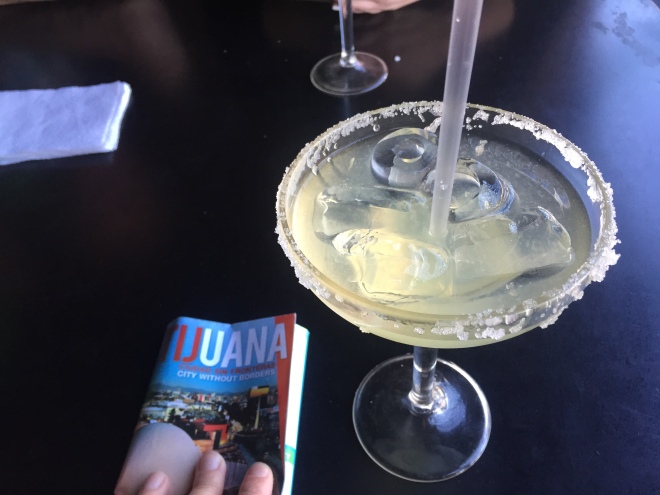 A luke warm glass of sickly sweet mix, those “margaritas.” I actually found mine to be completely undrinkable. Techno was blaring on the speakers, the mariachi showed up and played their instruments in competition with the techno, the whole scene, it was just horrendous.

We ordered a plate of nachos as we desperately tried to connect with an old friend of Jake’s, who lives in TJ

Actually, those were pretty damn good, all smothered in cheese sauce like that. We did a lot of aimless wandering then, trying to find Victors restaurant Bresca. We had an address, but no one in Tijuana seemed able to understand/locate it, or they didn’t want to. We got barked at to buy things, whistles blown at us for our US dollars and attention, and, for a while we wandered past about 100 yards worth of prostitutes, guts hanging out, ace bandage like tops strapped around their breasts. We decided to cab to the ” disticto gastronomico” where bilissfully, we connected to wifi at a Hyatt hotel bar. They even served a drinkable martini for $4. Things were looking up. 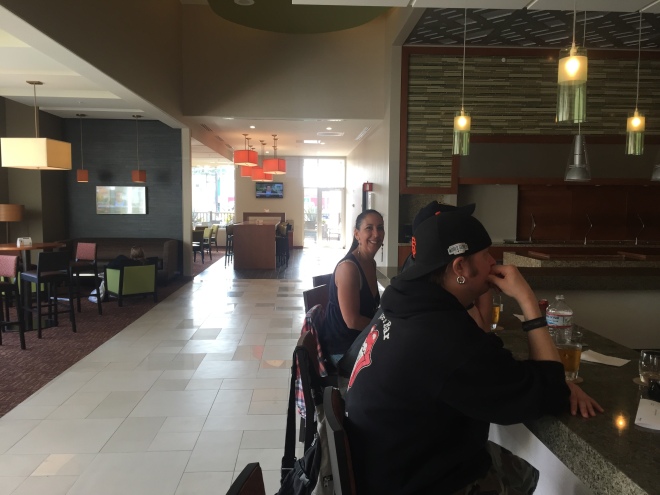 And then, Victor arrived, the jolliest and sweetest of fellows, with a warm and welcoming personality, ready to show us his town. He took us straight to BCB Tasting Room, and I knew just by looking at the sign that our troubles were over. 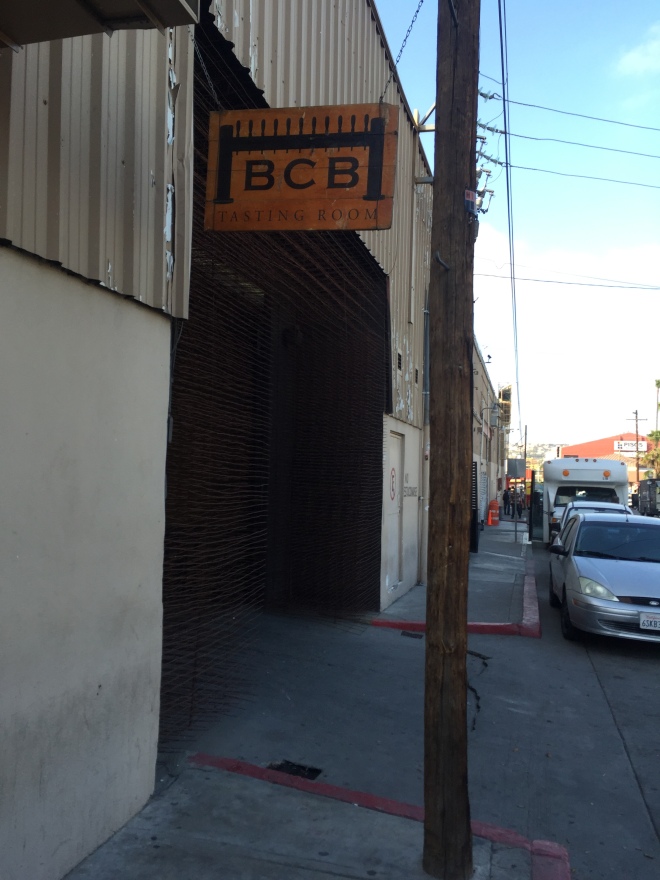 BCB is a craft beer taproom, our first example of what is truly happening to the culinary scene in Tijuana right now. For some blissful reason, Bay Area sports were on the TV, a luxury that had not been afforded to us since our arrival in San Diego 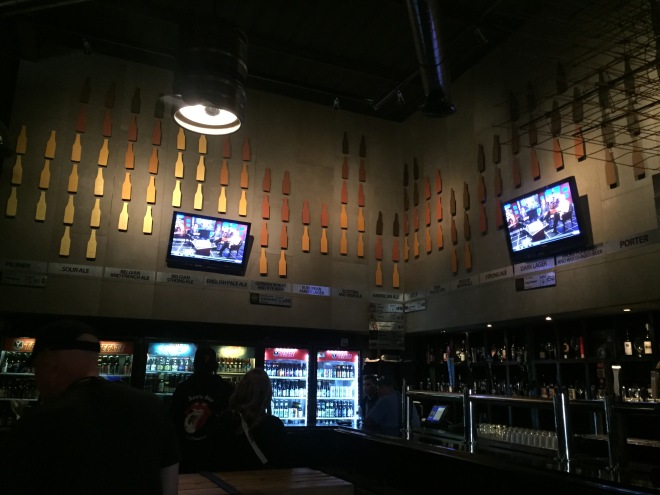 We ordered a round of wings at BCB, requesting the hottest they could muster, which never really ends in anything hot.

Except…these were screaming on the toilet twenty four hours later hot. The spice was of the creeper variety as well, lulling me in to a sense of calm security and then slowly, methodically, turning the heat in the back of my throat from low warmth to bloody scorch. I succeeded in putting one of those down and then called it a day.

This bowl of what is essentially French fry and cheese soup, 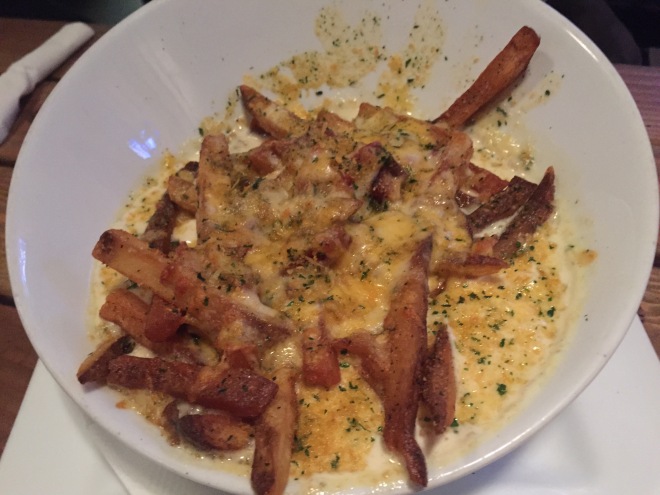 Duh. Delicious. Across the street, Verde Y Crema, which looks as though it could be in the most upscale neighborhoods in Mexico City

In the refrigerator case at the bar sits bottles of their herb infused water, bottles of wine produced in Baja, horchata, and craft beer.

The décor at Verde y Crema is sanctuary like, completely transporting you from the dingy alley that sits right outside the front door

We sat at the bar where we were afforded a view of the kitchen, which is topped with this great mural, painted by one of Victor’s friends 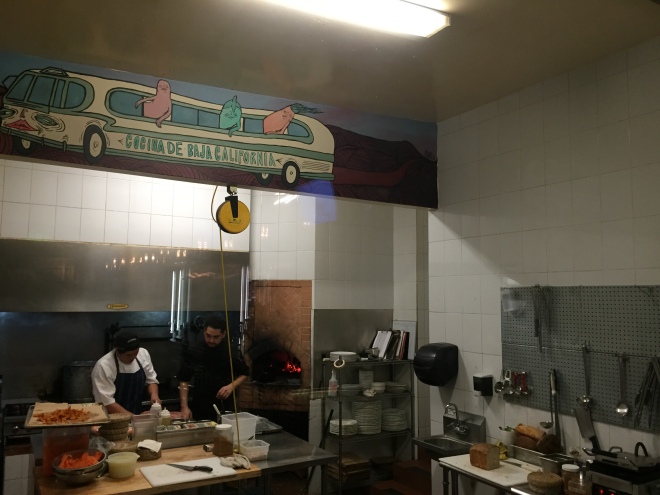 Their esquites were creamy and tangy, mixed with radish for texture and flavor brightening parsley 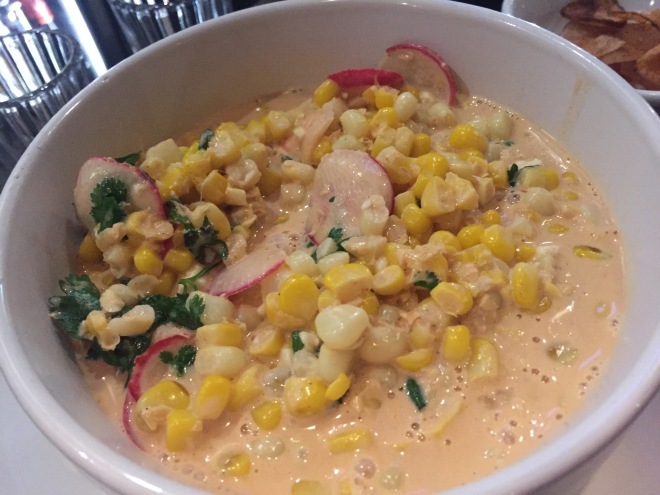 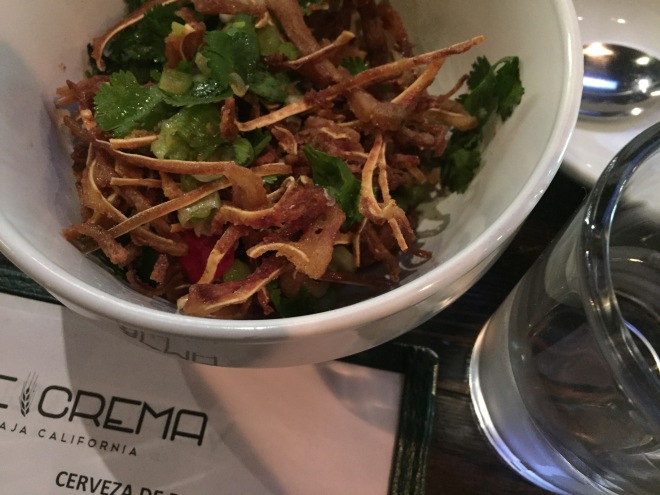 From there, Victor took us to his restaurant, Bresca, a beautiful restaurant just blocks from where we suffered so greatly earlier, sipping terrible margaritas and wondering, where, on earth, Victor could be. Bresca is, once again, of another world

an establishment that could easily sit amongst the trendy shops on Valencia street in San Francisco, with a lovely and quirky treehouse design 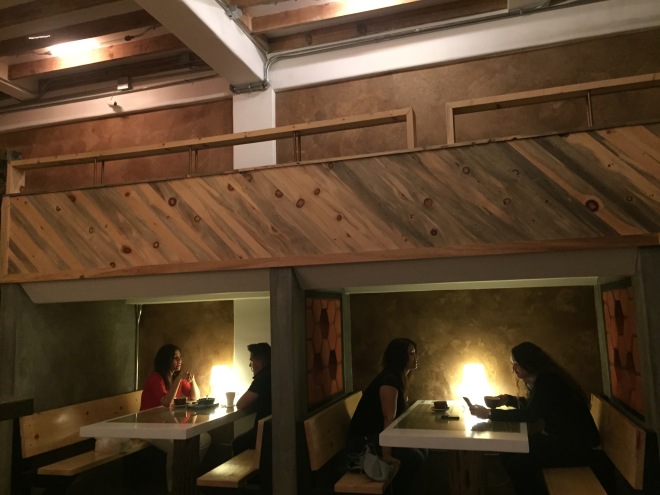 It’s hard to make out in that photo, but the table bases are tree trunks. The menu at Bresca rivals the look, with a porchetta sandwich that I would have wrecked had we had enough time to sit and sample the food. We were in a bit of a rush though, so the best I could do was order a chai that was like no other I have ever had. It was creamy, lush, phenomenal. 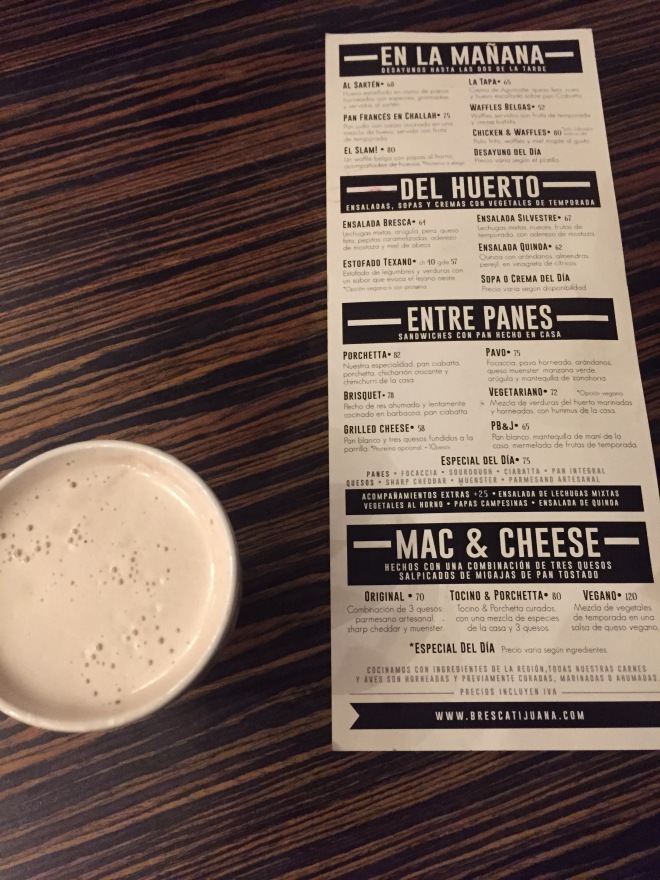 We started to see Tijuana in hyperspeed at this point, as we were time constrained, which makes my heart heavy as I type. I envisioned a later night with Victor, and as he took us from one awesome place to the next, I realized how much we needed just that. He led us on, to some place with a nondescript door on the street which led up a muraled staircase 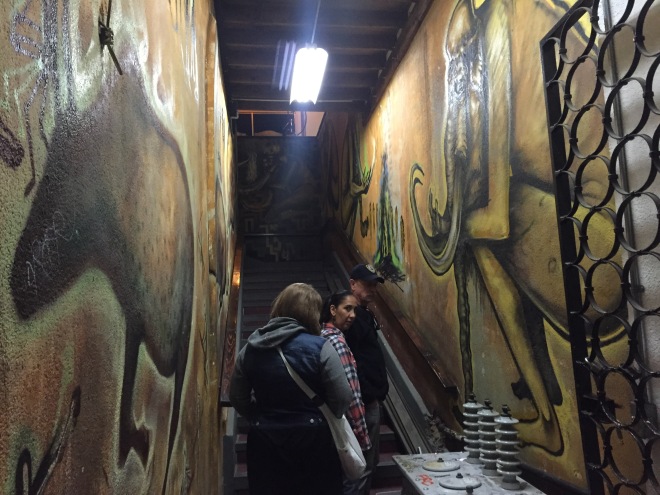 Into yet another craft beer taproom.

It still shocks me that all of this went down in TJ. This place was incredible, with an outdoor patio set with picnic tables, where we sat and drank and watched Tijuana going about its business beneath us. Also, I ordered four beers and a pizza, which ran me fifteen bucks, including tip. Seriously.

The pizza, covered in large thin slices of salami, was surprisingly satisfying, with a thin, crisp crust, light tomato sauce, and plenty of cheese. I’ll have to report back with the name of this place when I get it from Victor. We were in full hustle mode now, with time for one last quick shot of mescal at one of TJ’s oldest Cantinas, Dandy Del Sur 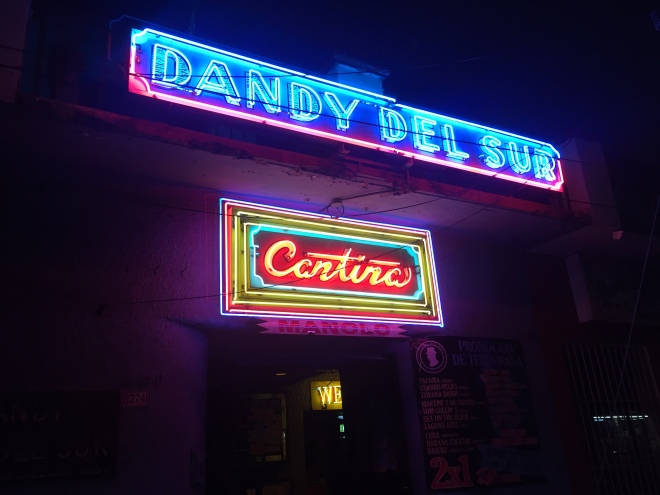 I feel in love with Cantina’s in Mexico City, where alcohol comes accompanied by botanas, or free little snacks, which were always delicious and interesting and different at every place.  The sandy ceiling, low, warm light, and little wood tables were pure cantina as well, making Dandy Del Sur yet another Tijuana delight.

One quick shot of mescal later, our clock ran out, and these two longtime buddies had to say their goodbyes.

I’m itching to go back, to stay, and to really dig in to the magic that is brewing on the streets of TJ.