I wanted to love Chino. I really, really did. I imagined that when Chino and I finally met, the planets would align and a love affair for the ages would ensue; clandestine meetings in the rain, long walks on the beach, weekend trips to Napa. I’m a fan of Tacolicious, Chino’s sister restaurant, which offers slightly upscale yet accessible Mexican, at reasonable prices. I achieved Nirvana at Tacolicious’s Marina location, when Giant’s pitcher and San Francisco paladinTim Lincecum floated in for lunch at the same time I did, like an angel faced, silky haired, fancy jeans wearing My Little Pony.

Also, I really like what I know of Sara Deseran, one of the owners.  I’ve heard her interviewed and I found her to be thoughtful, interesting, and invested in the community. Recently, she contributed an article to Saveur about a taco motivated road trip she took with her business partner and husband that appealed to me on so many levels, the article now sits in my “future travels” folder; waiting for the day I head out to recreate it myself  http://www.saveur.com/article/travels/on-the-california-taco-trail

And yet, Chino kind of broke my heart a little.  Food isn’t the only culprit, as they certainly have some dishes that I’ve enjoyed, though I don’t feel the need to venture over to the Mission just to have them again. Service also plays a roll; I have not once received what I actually ordered at Chino, my bill has never been correct, and most recently, I had a run in with a server who apparently read in her hipster handbook that smiles are strictly verboten, as is actually being on the floor during a shift. We theorized that she was watching TV in back and would only appear during commercials.

What I DO love about Chino is the décor; giant, colorful lanterns hang in clusters from the ceiling alongside rows of string light bulbs, invoking warm memories of Southeast Asia 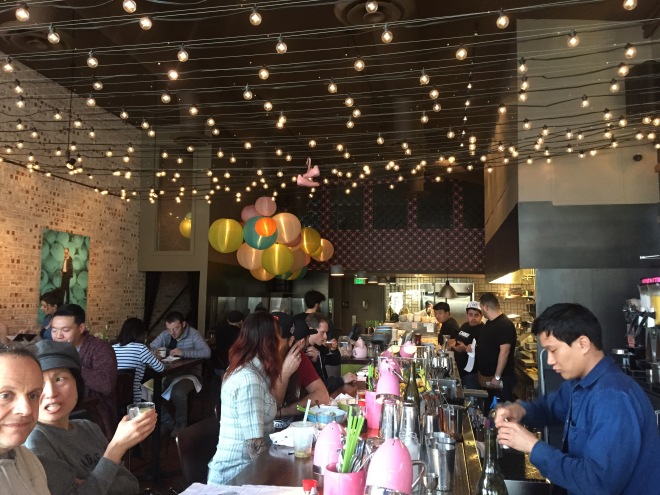 Pink plastic lights and utensil buckets line the bar, which is positioned next to this wall, a playful display of all things ’80’s

I’m also really into the tables themselves, customized with a hole cut into them in which a metal bucket sits, full of forks, bright green and blissfully plastic chopsticks (wood chopsticks send shivers down my spine), and soup spoons. Not only is that a cute idea, it’s a smart idea, allowing diners to avoid shuffling a bucket all over the table in order to make room for food or to see one another.

And then, there is the subject of the wings. My first experience with them came with no particular expectations or preconceived notions, just the usual, “I’m about to have some Asian style wings.” I hadn’t read a single review, blog post, tweet, insta-praise, etc. I was flying blind, as it were.

They arrived, mostly large drums, breaded, soggy, sitting in a pool of sickly sweet dressing which would have been more palatable with a healthy hit of fish sauce and lime. I was disappointed. Not everyone makes great wings, I thought. Why would they sit breaded wings in a pool of dressing, I thought. Never having THOSE again, I thought. And then, for the next month or so, I was inundated with posts on social media from the likes of Food & Wine magazine and Bon Appetit, i.e. national food publications, about the crispiest wings in America…top ten wings in the country…wings that NEVER get soggy…the only wing recipe you’ll ever need to make…THOSE wings. So I had them again.

The second order maintained a slightly crispier crust than the first, though whatever was gained by that was lost to the amount of sugar and the lack of balance or flavor in the dressing. I will never understand the absolute adoration that these wings seem to inspire in others, and as of this writing, I’ve given up trying.

The lumpia fared better for me, one, because fried stuff. Two, because the skin was not greasy, though the filling was a little dry, overall it was satisfying enough, served with a dipping sauce with a nice bit of tang

The first service fail occurred when we placed an order for all of the dumplings on the menu; an extra order of dumplings that were not, in fact, on the menu arrived, leading us to believe we had perhaps received a gift from the kitchen. Wanting to know what said gift was, we asked our server who explained that they were red curry lamb, and that they were not, in fact, a gift (which is fine, none expected of course) but that we simply had old menus. Then she charged us for them.

That said, those red curry lamb dumplings were my favorite that night, they were gamey, toothsome, and perfectly greasy. 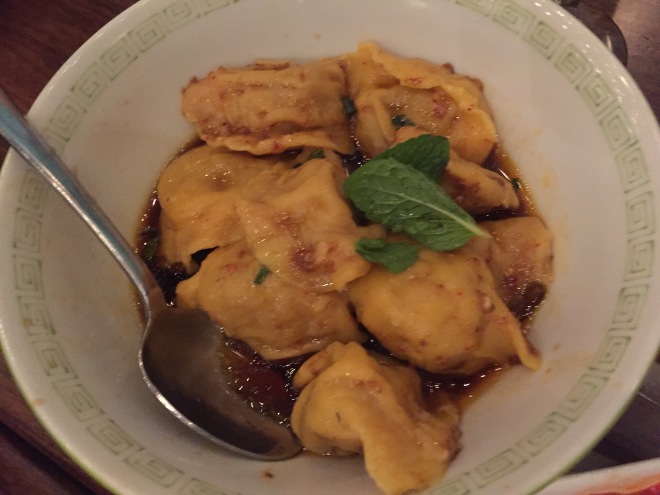 The butternut squash also came in a nice firm dough which gave way to the lusciously soft, mushy vegetable filling. They were quite sweet, as would be expected, though the flavors worked well when mixed with soy and hot sauce.

My XLB was disappointingly tepid. Had I eaten it at its optimal temperature, it would have been a perfectly pleasant version.

The shrimp dumplings in chile oil were more satisfying, filled with shrimp that tasted and felt fresh, as opposed to the frozen mealy variety so often served by chefs who DGAF or who think they are saving money by serving inferior product. The difference is noticeable, trust me.

My second pass coincided with a Sunday baseball-viewing invite to Garagskis, Randi and Mikey’s killer Bernal Heights garage bar. We opted for Chino take out that day, wherein I was charged incorrectly yet again, this time for something I ordered and did not receive. At least the first time I got something I didn’t order, notified my server, then was charged for the item, the end result was more food, not less. No, I didn’t raise a stink about the bill either time and I am sure that they would have accommodated me if I had.

From the snack menu, an order of seaweed salad, with glass noodles, tree mushrooms, thai basil, pressed tofu, and fresno chiles. This is one of the dishes that I really like from Chino; the mixture of textures, from firm to slimy, the combination of light and earthy flavors, the hint of spice, it all works.

Also on the snack menu, Korean rice cakes, my absolute favorite ROK street snack, known there as ttokbokki. Behold this enormous caldron of the stuff, at a street market in Busan:

Chino bills their version as “Korean American Rice Cakes” a decidedly less saucy version of Mr. Peanut shaped, chewy rice cakes coated only in the flavor of the ground pork grease with which they were tossed and some fried pepper paste. It’s a tasty dish that’s fun to eat, chewy, meaty and greasy, with refreshing hits of chopped celery.

The spicy pork noodles had a similar flavor, with the addition of something creamy peanut going on somewhere, but it was hard to tell from where, because I had gone and mixed everything together.

Lastly, a side order of eggplant, soft, caramelized, and richly flavored

Turns out, the take-out experience was the best of all.

My most recent attempt was also the most disappointing. It was Saturday lunch during Pride weekend. Marriage equality had just become the law of the land, and San Francisco was positively giddy. We were one of about three tables seated for lunch as oppressively loud dance music blared from the loudspeakers, which for some damn reason, they kept turning UP. It was so loud that the person trying to speak had to yell while the rest of us leaned in, aiming one ear towards the speaker, as though we were a table full of ninety year olds at a retirement home happy hour.

I ordered a Ho Coc to start, which in theory, should have tasted faintly Mai-Tai like; a mixture of coriander infused rum, black tea, pineapple, and lime.

In reality it was more tea bitter and syrupy sweet. I did enjoy the cilantro garnish on top which lent a nice herbal aspect.

One of my dining companions ordered a boba cocktail, and while boba tea is not at all my thing, I really dug it in this form. Just add alcohol, it turns out. 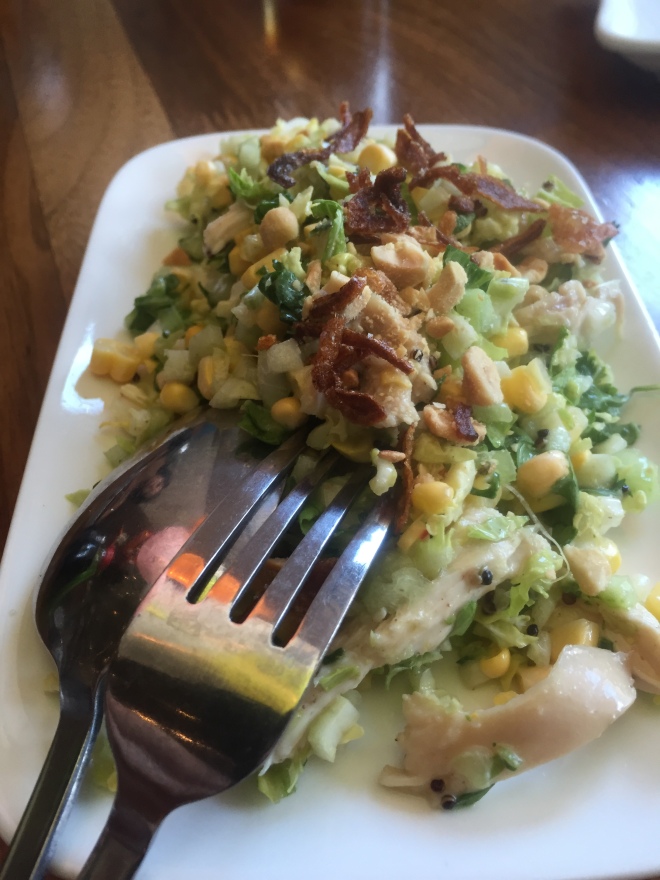 Again, on paper, or in this photo, I like this salad. It’s got some nice looking shards of chicken, nice little pops of corn, the always delicious addition of fried shallots, but, the dressing was sweet where it should have been bright. In short, I felt as though I just had a simple syrup cocktail, wings in simple syrup sauce, and a salad dressed in the same.

Our server, on this day, was the humorless hipster. Try as we did, we could not get even the slightest hint of a smile to appear. Was she hungover? Was it our lack of costume on such a festive day? Perhaps she just put her cat to sleep the night prior? I do not know. What I do know, is that our order was botched once again; the charred corn we ordered never arrived, while an order of dumplings that we did not ask for, did. I found it rather odd that she left the unordered dumplings on the table as she went to check the ticket, verified that we didn’t order them, left for a while, then came back and took them. Most places would just leave them, say “my bad,” and move on.

These breakfast bao, however, exemplify what I had hoped and wished Chino would be; without a doubt the most interesting and delicious montage of goodies I’ve yet to consume there 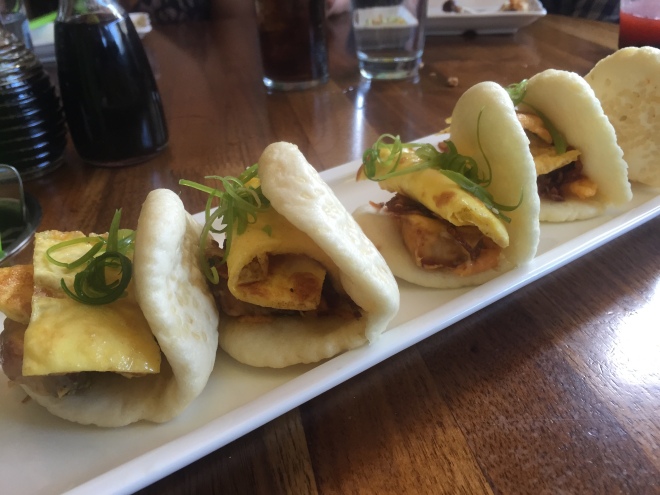 The bun, a bleachy flour flavored number with a slightly gummy texture, containing folded omelette and richly succulent, moist yet crisp, pork belly chicharon. Soy sauce brought the whole thing next level, and though I longed for hot sauce as well, I didn’t want to wait for any.

The heirloom tomato dumplings in Tom Kha broth were an interesting idea, but the broth was a bit weak in flavor and a little difficult to access with our thick soup spoons, as it lay spread across a plate. It would have been better served in a bowl 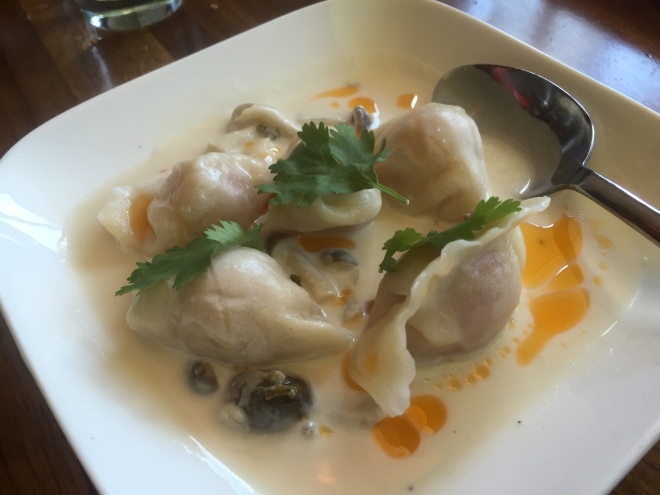 Part of me was really irritated that these dumplings contained one, individual cherry tomato inside, leaving very little room to make anything interesting of the filling;  I expected more of a tomato relish; however, biting though the dough to find the sweet juicy pop of a firm, whole tomato was also quite satisfying

When one orders a glass of wine at Chino, it arrives in a pyrex. Kinda cute. 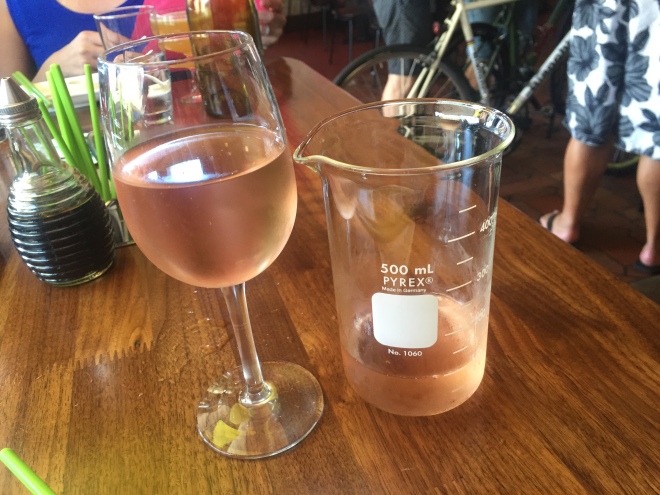 I do have to give gold stars to our food runner, who delivered this giant beaker full of wine and ended up being the one bright spot in the service that day. He was positively jubilant. In fact, I think Mikey hugged him when we left. That guy, he’s a keeper.

Our final dish was an order of the kimchi dumplings, which we ordered two of, but got one, so, half the table ate while the other waited for the snafu to be cleared up. In no way did these impart the strongy, pickly, stanky flavor that we all know and love kimchi for, but were instead just a bit wet and bland inside.

Is there some good stuff to be had at Chino? For sure. Are there some not so great things to be had? Of course. It’s not a miss all around by any means, but for me, not a destination either.