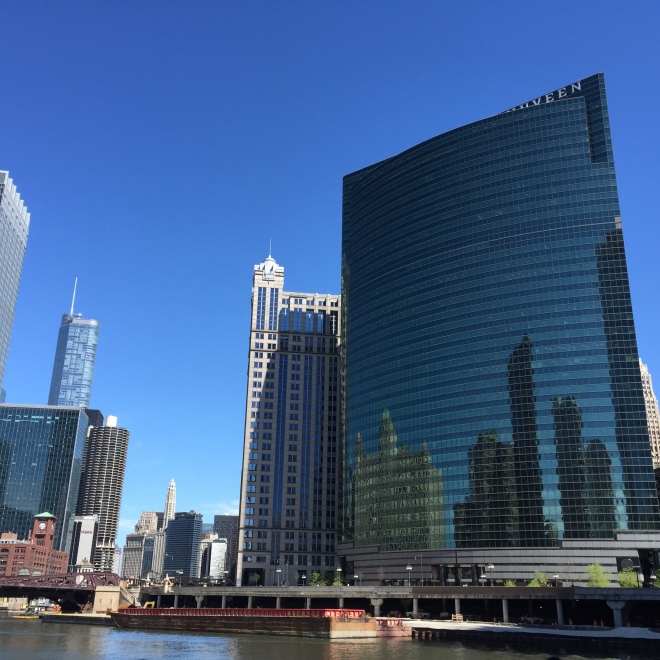 The Midwest, USA by postandjonesFebruary 20, 2017

It is highly probable that there exists no group of travel buds who loathe, dread, and despise an organized tour more than we. An experiment in torture, the organized tour is, inevitably, a hijacking of our precious time by a guide who verbally vomits far more information than we could ever want, dragging us from inconsequential sight to inconsequential sight, eventually depositing us in the gift shop; all the while exposing us to fellow tour takers, at least one of whom inspires murderous urges, and the whole experience at some point, results in a fight or flight panic…of course, sometimes, a tour is simply mandatory in order to accomplish certain goals, so we grit our teeth and hope for the best.

We began Chicago’s famed architecture tour with actual, legitimate, excitement; its reputation is beyond stellar, and, one of us had done it before and gave a glowing review.

We had to go pick up a friend, which mercifully took us by Eataly, and so, a morning hit of flatbread; this time, with red onion, rosemary, and sea salt.

Our tour departed mid-afternoon, giving us the opportunity for a leisurely lunch on the Magnificent Mile. Despite all visual evidence that it’s a tourist trap, we chose the Purple Pig, which is located (more or less) across the street from the dock. https://thepurplepigchicago.com/

I was pleasantly surprised by the menu, a compilation of small plates and spreads, many of which included offal and unexpected combinations such as pork bone gravy with ricotta and salt & pepper beef tendon chips; we grazed over a spectacular array of perfectly sharable delights; a meaty, bright nicoise, creamy tarmasalata, richly sauced meatballs, beef tongue, a Chicago style organ meat dog, and a tangy beet salad topped with whipped goat cheese and pistachios. 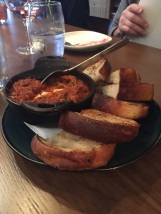 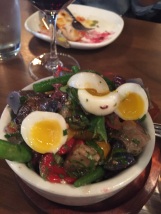 Across the street, we boarded at half hour prior to departure (Tickets run $44/ea, available online or at the dock kiosk) hit the downstairs bar for a round of crisp IPA’s, and settled in across a row of folding chairs. Soon, we pushed off, cruising back in time past various architectural era’s, our guide providing historical detail, design and engineering factoids, and juuuust the right amount of witty antecdote. 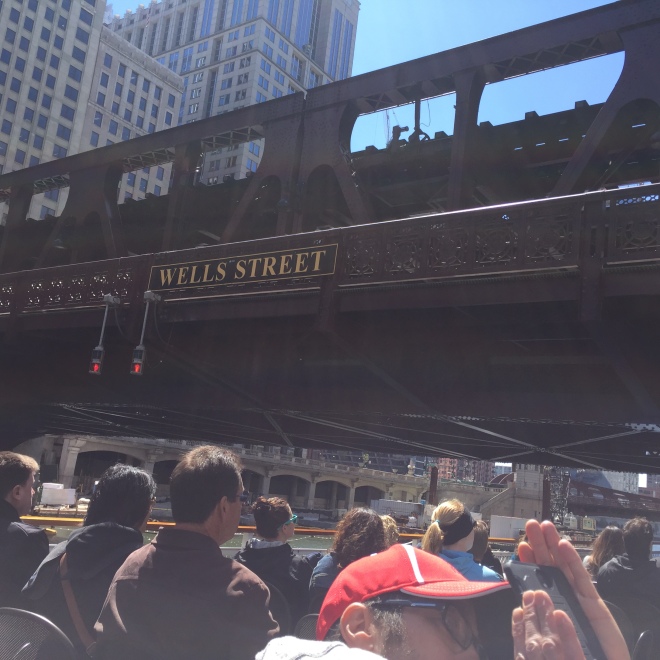 We were blessed with a bright, clear sky that day, allowing the shiny glass skyscrapers to preen in a rare bath of April sunshine. 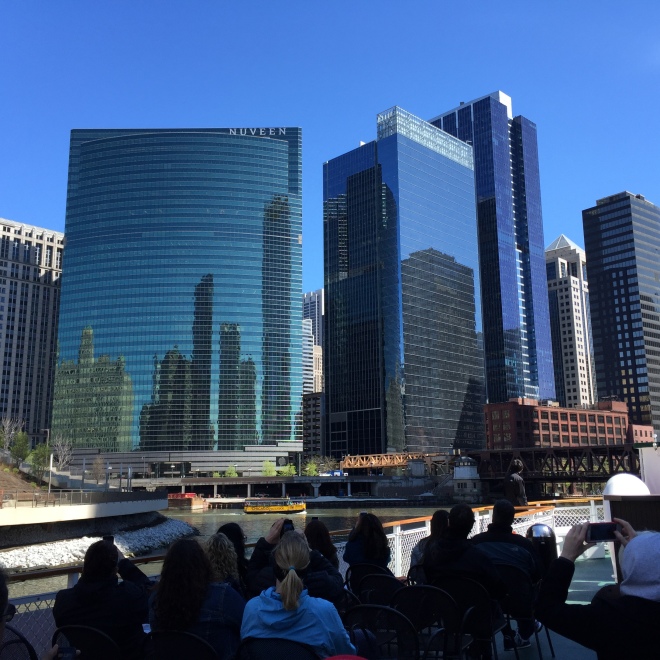 As stunning as those green glassed beauties are, part of me preferred old school art deco, though really, it’s a Sophie’s choice. 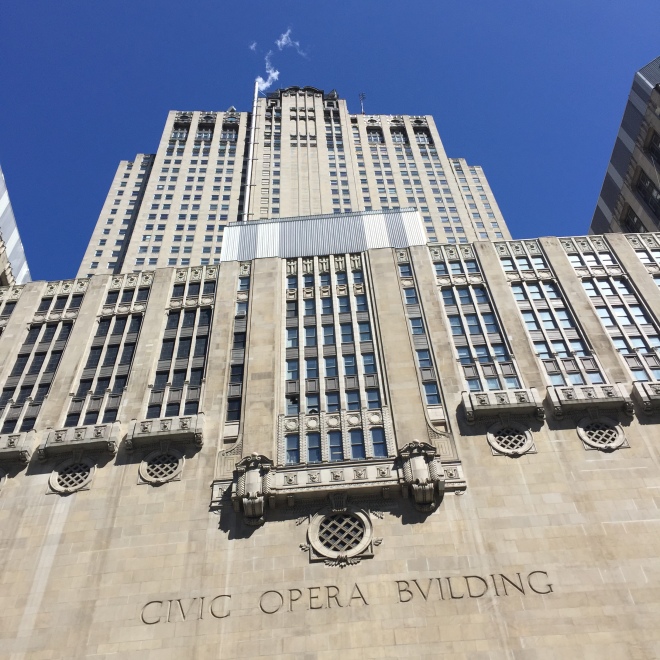 I can think of no better way to spend an off-baseball season day in the Windy City, which is not to say that the desire to drown one or two of our boat companions didn’t strike, but hey, nothing is perfect.

Post tour, we strolled to the Hancock building, their Pier 39 in the sky, for a view of Chicagoland’s relentlessly sprawling metropolitan area. https://www.signatureroom.com/room/ It’s always crowded in the “Signature room;” a weird, painfully touristy place where everything is insanely overpriced, but most of our group had never been and the view is actually worth the trip. The food however, leaves much to be desired: 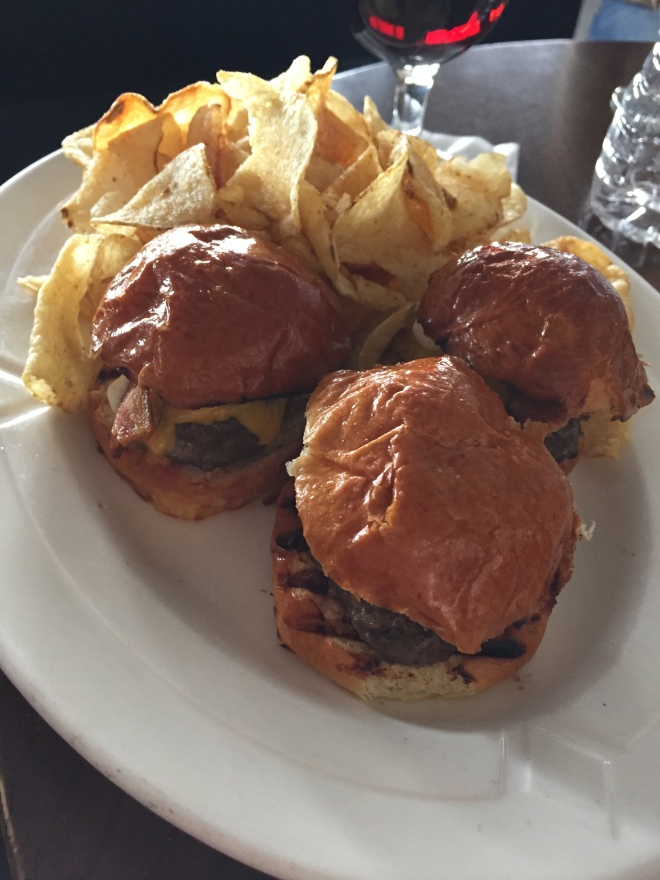 Of course, those two platters of slop rang in somewhere near the $40 mark; which is not to mention the heart stopping cocktail portion of the bill.

Our afternoon on the boat had put a spell on me, casting the gorgeous buildings along the walk to our hotel in a new, dramatic, light. 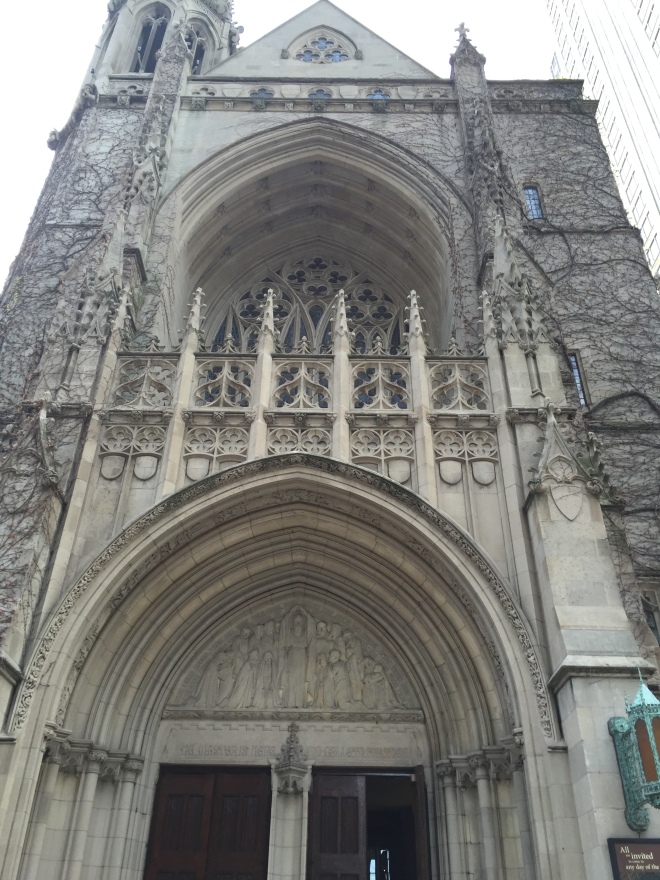 The arch tour plied me SO well, that I considered returning to the church for a tour with a docent, but alas, after a good nights sleep, the old, intolerant me, returned. 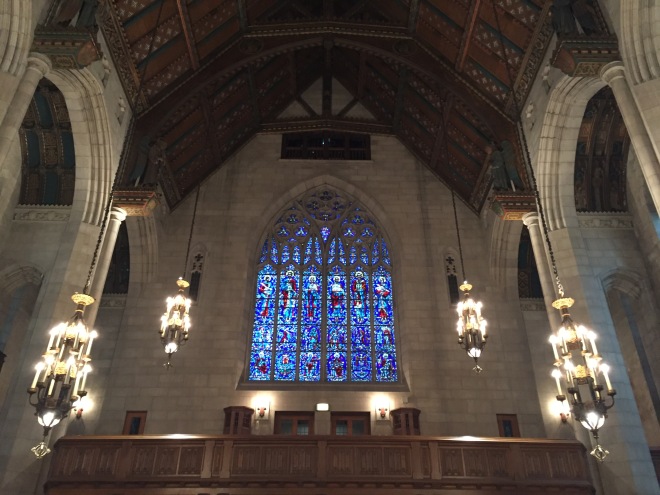 And then, god help us, another stop at the Billy Goat

For our last trick, I suggested dinner at Bacchanalia http://www.bacchanaliainchicago.com/  a place that was billed as an industry spot, where chefs and bartenders go after a shift, an old school, red sauce kinda place. Our cab driver took us on an interminable ride to get there, only to discover that he had chosen the wrong version of the street we needed (south vs…north, I suppose?), and then, an argument ensued, and anyway, we paid way too much despite refusing to pay full price.

Things actually got worse when we entered in Bacchanalia, where the front room/bar was too brightly lit, a bit sterile, and manned by a bartender who was clearly overwhelmed by the three customers that she had. She was none to happy that we chose to sit at the bar, and there was much yelling between her and the kitchen (located behind a swinging door) as the night unfolded, about what a pain in the ass our desire to eat was. So much, in fact, that Jake went back to the kitchen and actually had it out with the chef, after he loudly complained that he had to make our order. A chef himself, the whole situation proved overwhelmingly unacceptable to Jake, and, the bartender thanked him after, as did the owner, who was sitting at the bar the whole time doing not a thing.

Our food (yes, the argument did commence before our food was cooked…perilous indeed) was in keeping with the place, starting with this hackey tomato salad (in April, mind you) positively lousy with red onion and dried oregano 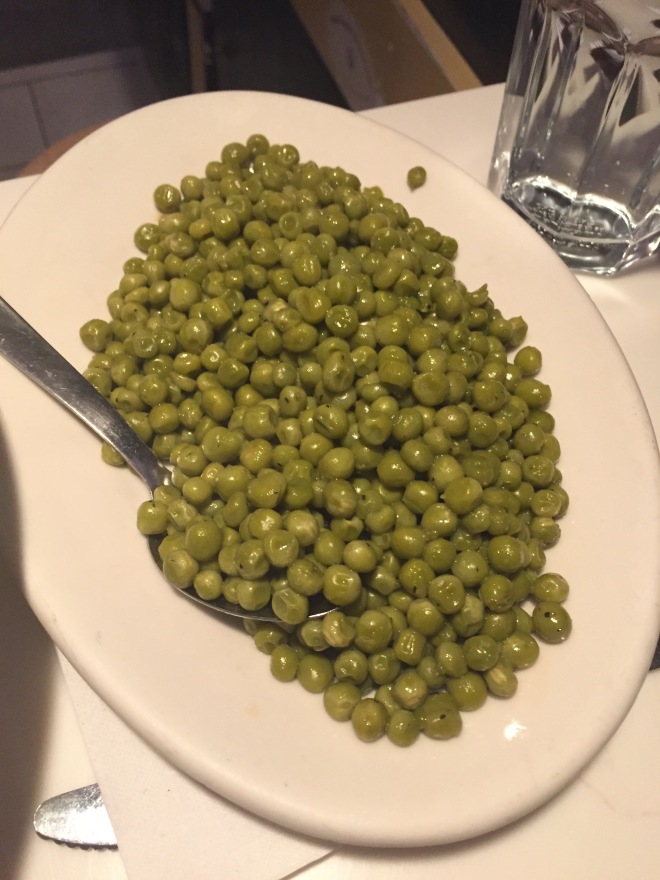 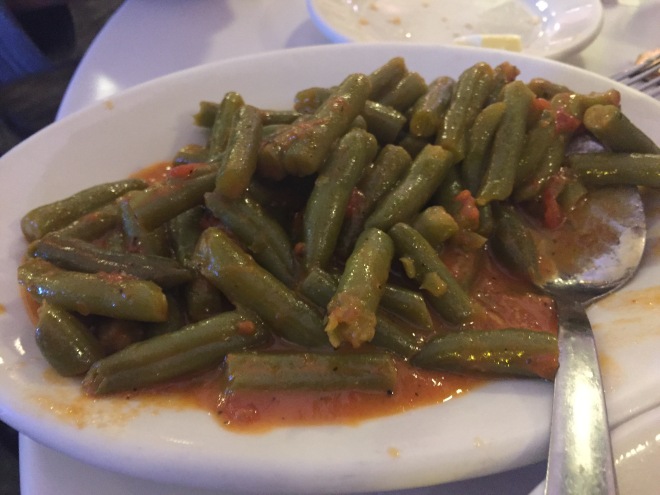 and then, the pastas; two surprisingly satisfying, craptastic dishes; one, a carbonara 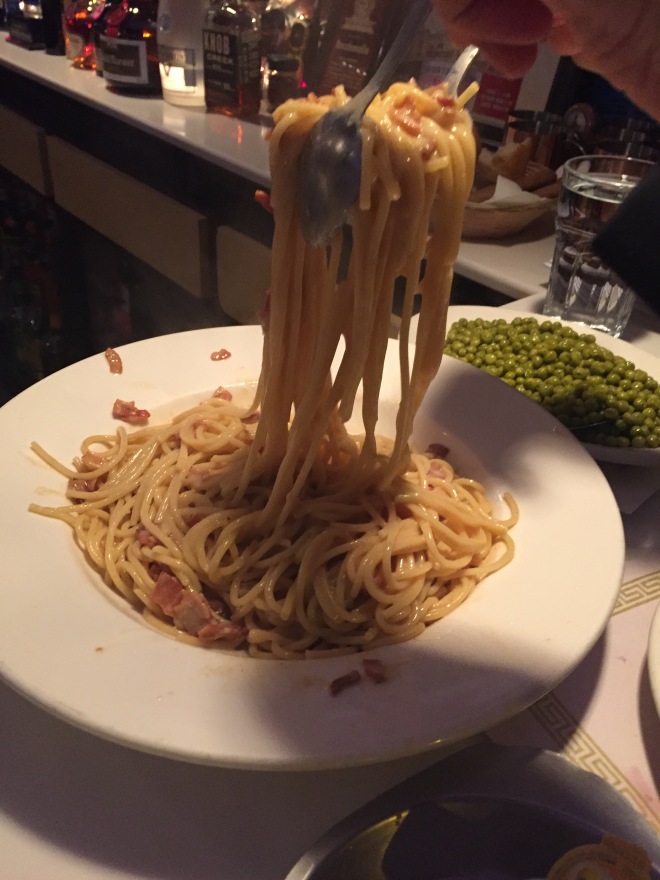 the other, a mystery meat parmesan

As we finished, our garlic bread arrived, dry and sad. An homage to the dysfunction of the entire evening. 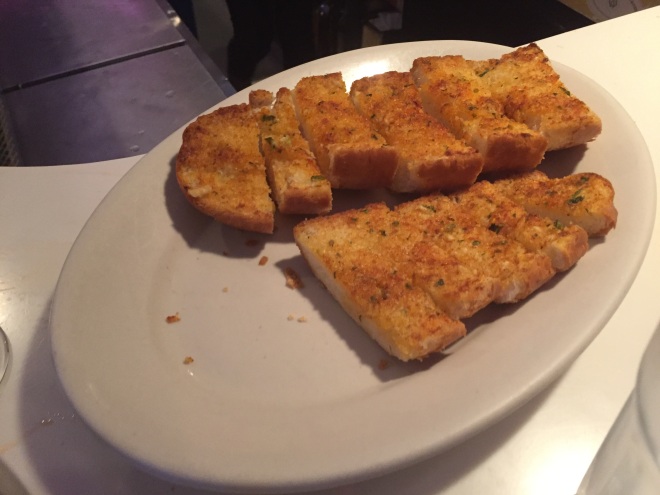