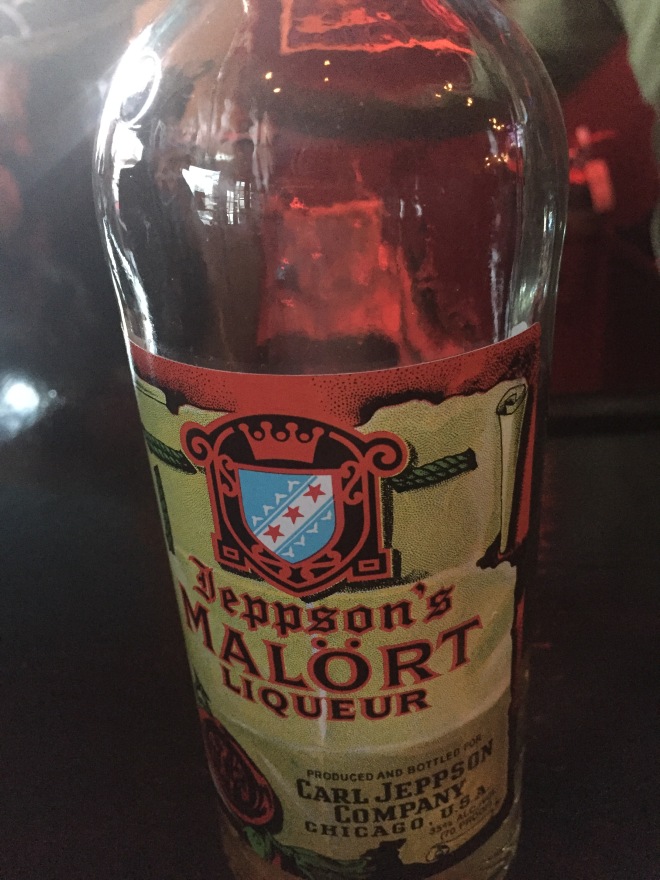 The Midwest, USA by postandjonesDecember 17, 2016

I woke up with a bad food hangover; the dry remains of a dark, depressing, day lingering on my tongue, memories of terrible foods surfacing and making me wretch; the shakes, the drools. I needed to consume a momentous meal with terrible urgency, though our midwestern friends had decided to break the fast with us, so, I had to tread ever so lightly, finding the right tone and tenor, offering juuuust the right mix of cheap, hearty, and familiar, without settling for the breakfast version of yesterday’s edible Armageddon. I suggested, ever so delicately, that we head over to the Pittsfield café, a diner with promise, over in the Loop. http://pittsfieldcafe.com/

For a fleeting moment, I thought all was not lost, a nearby patisserie was open, the menu looked promising, and business was booming. But see, since the moment of their arrival, our friends had been regaling us with tales of the magical meals they’ve had at Dunkin’ Donuts, and, what do you know, there was a goddamned Dunkin’ right there, across from the patisserie. To be fair, DD was kind of the stuff of legend back home, and at the time, the Bay Area had none to speak of. Since, a location has opened in Walnut Creek, where for the first month or so, throngs of hungry folk waited patiently in epic lines, for….this. 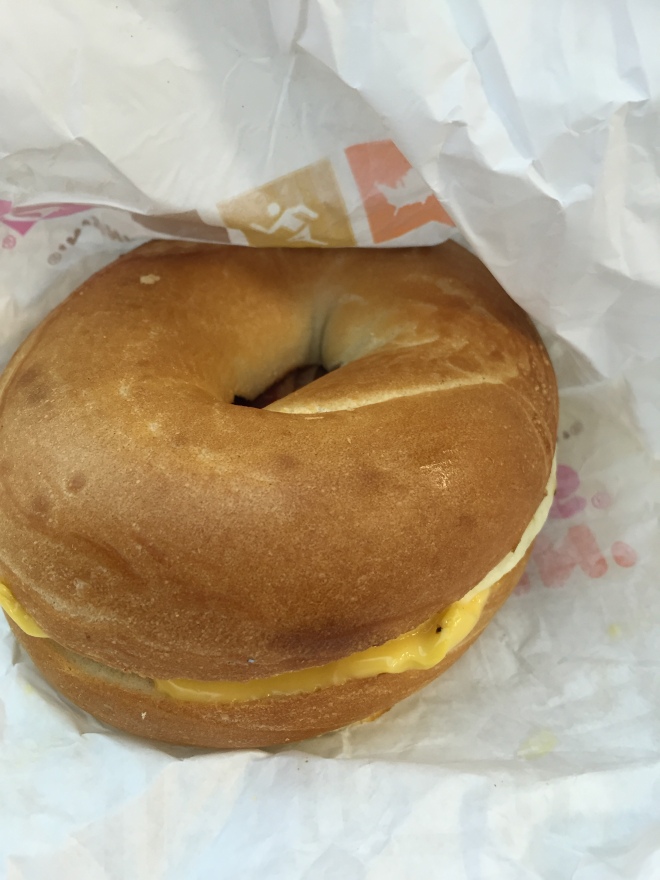 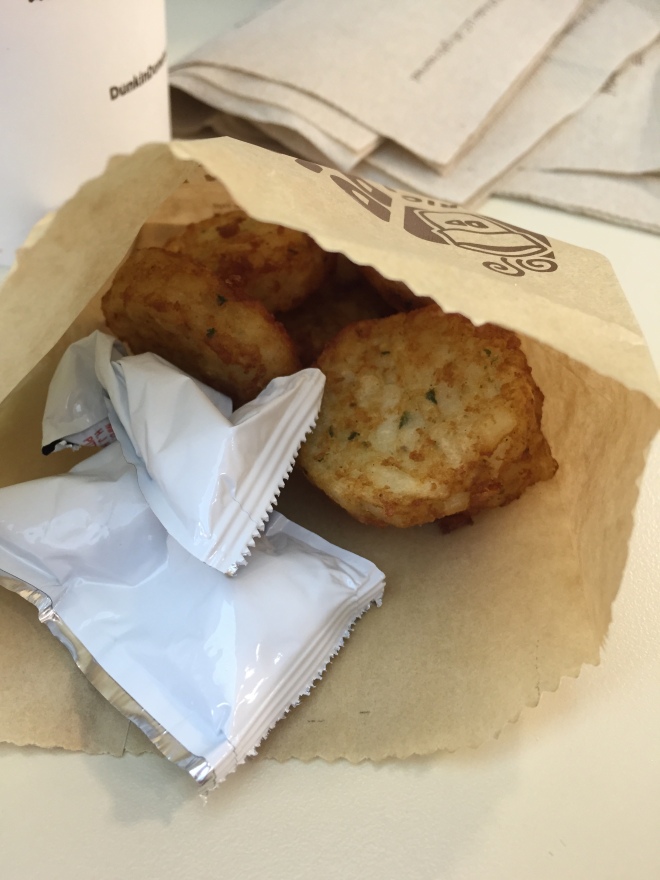 Rage would probably be the appropriate word for how I felt during and after this “meal.” Or despondence. They both work.

We said our goodbyes and retreated, like crabby schoolchildren, to the Sweetwater café for a Giants game; sullenly licking our wounds and awaiting what promised to be an excellent dinner. I would miss them, I would. Few people worship at the altar of food like the four of us do, and I sort of accept that.

In the meantime, a  surprisingly decent plate of sports bar nachos. 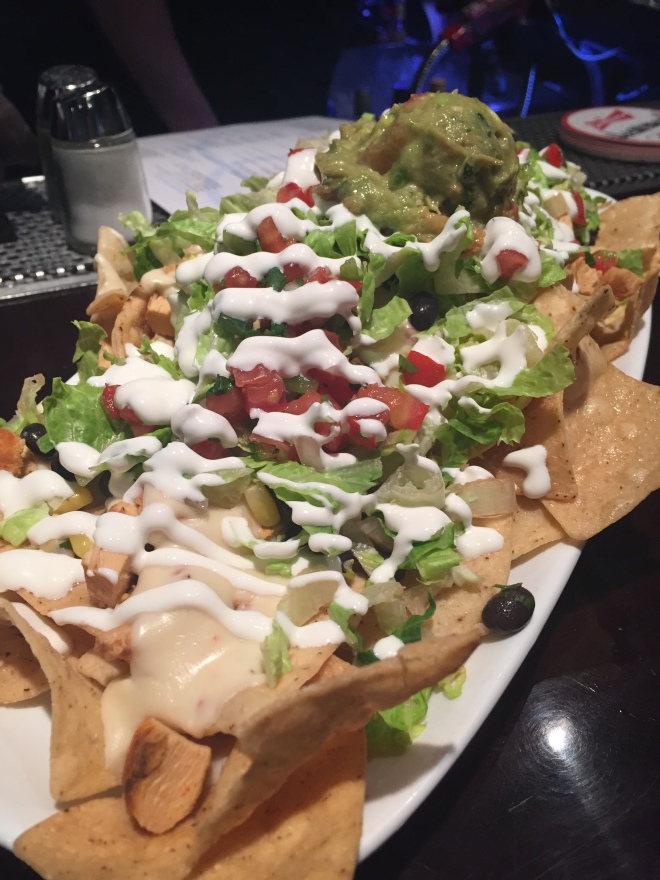 A few years back, I was in Chicago, sitting at a bar (Yusho) drinking an exceptional Gin & Tonic, carefully reviewing my four-restaurants-in-two-hours ironman style itinerary with the bartender. Next to me, a fellow  nerd lifted his eyebrows, intrigued by these strangers, their choices, their commitment to excellence (here’s to you, Vince Lombardi). Introductions were made, social media friending occurred, and a real life friendship ensued; On this night, we would reconvene, and for once, I was thrilled that someone else would be driving this eighteen wheeler.

Not one to disappoint, Theo lit the night’s powderkeg with shots of Malort, a curiously foul beverage that conjured memories of my first, teenage sips of alcohol; hot, eye watering stuff that was described to me, ever so accurately, as pencil shavings and gasoline. Malort is Chicago’s Fernet; their tough, nasty, chest hair sprouting, industry drink.

Dinner commenced at Dos Urban Cantina, a new, and popular, upscale Mexican restaurant, and as it all happened, I was in such a state of absolute, “I’m with my people now” euphoria, that I couldn’t even tell you about our meal, except to say that it was divine, and I felt almost like I had just been down with the flu for a week, and now it was time to party, and life was just…GOOD. http://www.dosurbancantina.com/#reserve 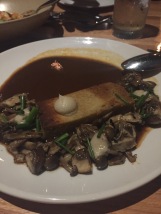 Theo, our culinary ambassador, understood that we had lost time to make up for, that we were in an unsatiable state, that we needed more, and different, and varied. The next item to emerge from his Mary Poppins bag was a trip to a Mezcaleria, for the city’s best breakfast sandwich (from adjoining Johnnhy’s café) and, duh, Mezcal. http://www.thejohnnysgrill.com/

We arrived about thirty minutes before the kitchen closed and were immediately stalked by a server who delivered the news, before we could even get our coats off, that the kitchen was in no mood to make us a breakfast sandwich (or anything else for that matter), but nothing was extinguishing my flame, and of course, Theo knew just what to do, zipping us right next door to Billy Sunday. http://billy-sunday.com/

Billy Sunday was a warm blanket on that cold Chicago night, familiar, comforting, dimly lit and slightly abuzz, the place just kind of put us at ease, with an aggressively hip variety of cocktails, rare spirits, and well curated booze snacks; among them, this jar of lemony fried chickpeas

And a velvety, rich pate 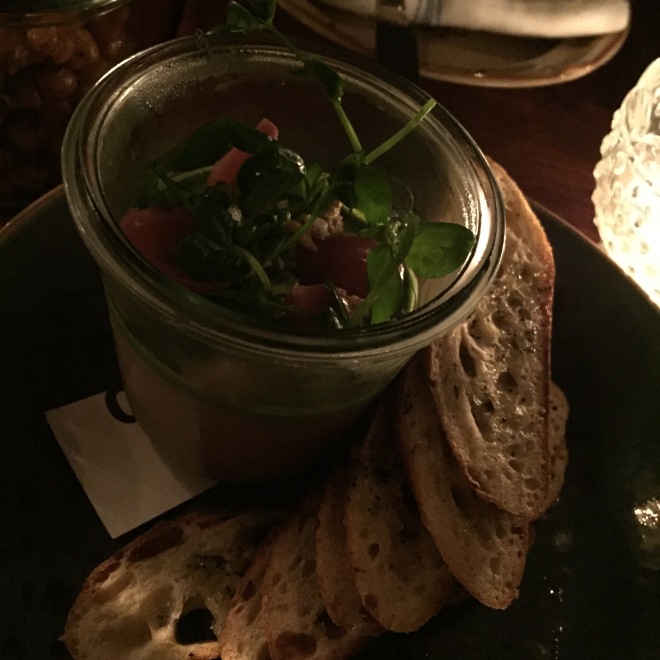 Both, fine complements to the buffet of alcohol spread across our table, a selection of tiki drinks served over crushed ice in cans, overly intellectualized cocktails

A grossly expensive shot of Chartreuse

And, for looksies only, this $108 bottle of Fernet Tonic 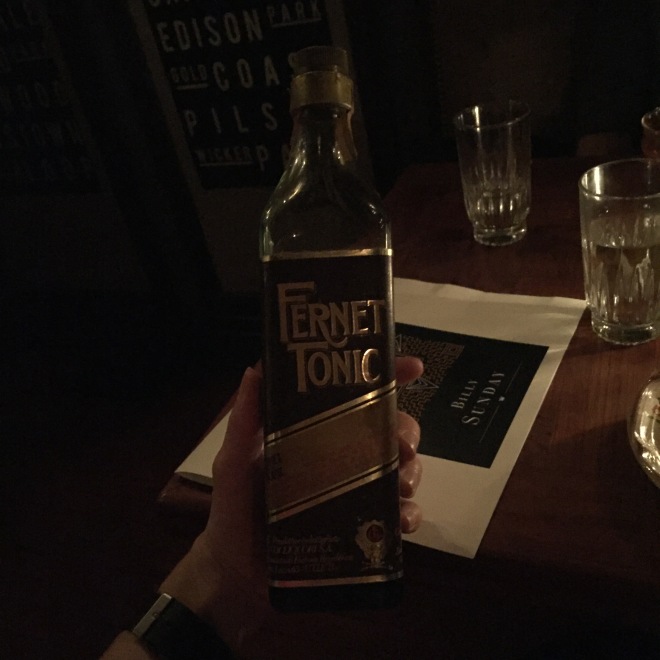 Theo took his leave then, but not before walking us to Lost Lake, a tiki bar that had just received crazy accolades from multiple publications. http://www.lostlaketiki.com/

Soon, a tropical mixture set ablaze arrived, naturally housed in a brass pineapple, four long colorful straws inviting us to share and share alike. Not that anyone was actually hungry, but, our server gave a nod to the $5 instant noodles, so gun to head, we threw one of those suckers in the mix. For $5, it was really a no brainer.

Let’s take a peek under the lid, shall we?

Inspired by Roy Choi’s biography/cookbook, which, incidentally, is a great read amidst excellent recipes, the Lost Lake cup o’ noodle was my 80’s childhood in technicolor; brighter, weirder, and with a tinge of acid trip. Floating like a fat-cap above the traditional Maruchan mix, a thick glug of butter, creamy American cheese, scallions, sesame seeds, and a dash of togarashi; cup o’ umami.

We ordered four more, and reveled, for the last time that night, in our good fortune.