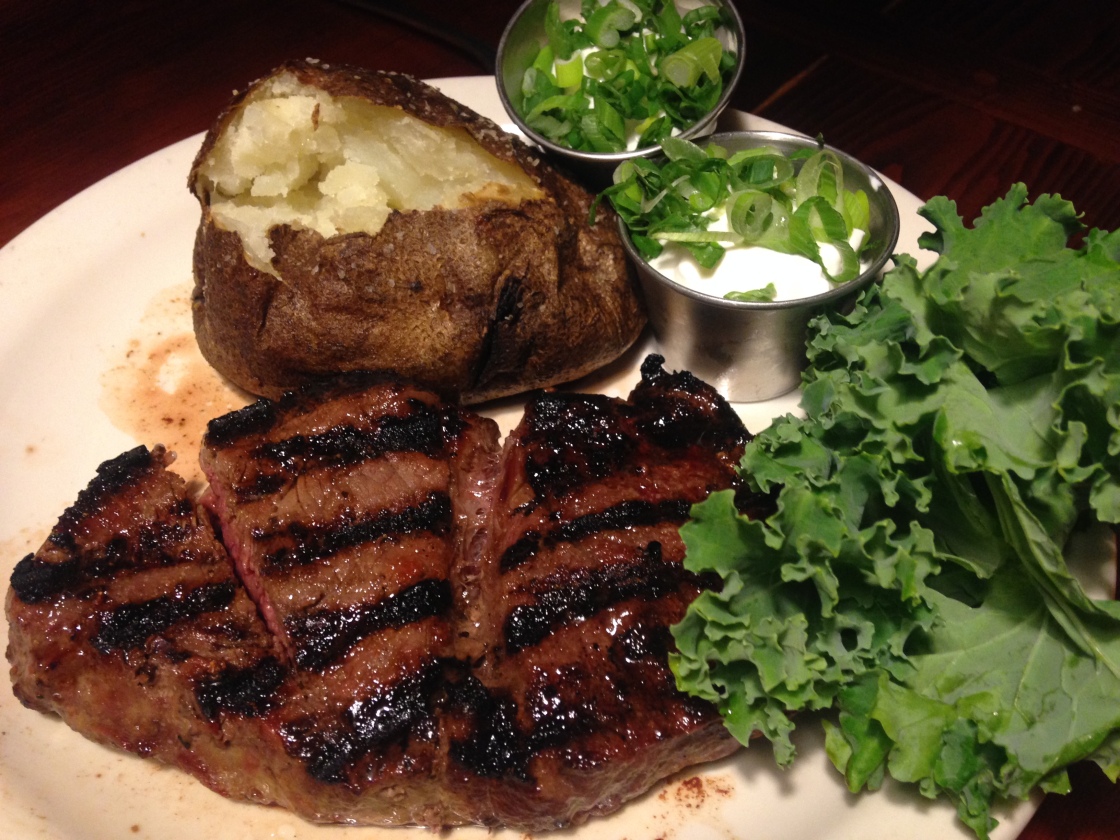 I know. Eat Dixon? Because it’s such a worthy food destination that some reader out there, someone planning a trip, is frantically searching for options in the dried out, srip malled, barren town that sits, unloved and unwanted, along the side of highway 80? And also, “The Cattlemen’s?” As the name suggests, a feed bag style steakhouse, a place that actually offers a 2 lb steak without so much as a wink or a smirk? It may seem, at first glance, that none of this information could possibly be of interest to anyone, but really, you should hear me out.

The road to Sacramento, 80 east, is a maddeningly well-traveled one, dense with people who commute between Sac and SF, but also, it’s the link to Lake Tahoe, the route to the American River, the entrance to camping in the El Dorado hills, the way east. I begrudgingly make the trek to Sacramento every six weeks, seething with hatred for everyone who is doing the same. It’s not a fun, or pretty, drive.

I’ll just get right out there and admit that I do it to get my hair done. Yes, I know how unbelievably stupid that sounds. What hair cut/color, what hairdresser, could possibly warrant a regular hour and half schlep, nine times a year? One that charges me a fraction of the price of the over inflated, precious, absurd, hair palaces in San Francisco. It literally costs me over $200 to get a cut and color in San Francisco. I’m not getting a Mohawk, or a Brazilian blow out, or any other variety of coiffe that requires a little extra elbow grease. I’m getting a trim. And some color. Even when you include the cost of gas, going to Sacramento for hair costs half what it does in San Francisco. That’s not to say Sacramento is some wonderful, hidden secret of the barbering world. I followed my hairdresser there when she left the Bay, and my hairdresser is a family friend who gives me one heck of a deal. None of you need bother go there with the expectation of a hairstyling Shangri-La. Randi gets her hair done with me, which makes it infinitely less painful, and to further improve the situation, we’ve created a bar (before) and dinner (after) routine.

That road, San Francisco to Sacramento, is truly a restaurant wasteland. Well, it is if your goal is to make a stop right off the freeway. Your options are fast food, fast food, fast food, gas station, fast food, sit-down chain. When I was growing up, my family owned a condo in Tahoe, and, we committed to the Cattlemen’s as our dinner stop early in my young years. In fact, we would time our departure from Incline Village based on their 5:00 opening time. The tradition has held for me, and now, I time my hair cut so that we are blown-out, straightened, glistening and adorable, just in time to reach Dixon at 5:00. 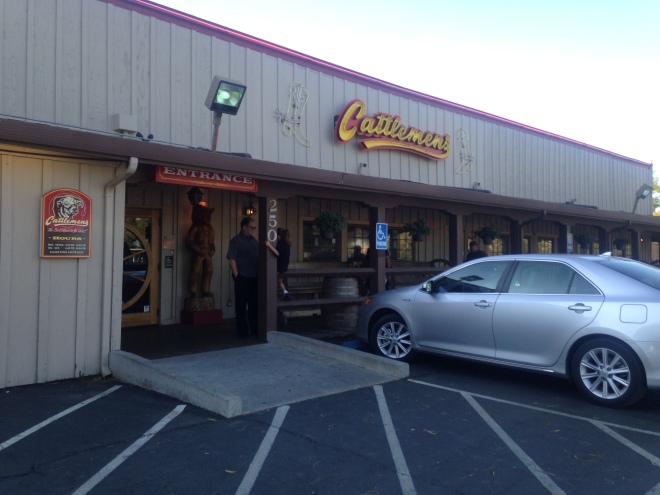 Be warned. People stand outside and wait for the Cattlemen’s to open. Once it does, they line the lobby, pile up on the deck outside, and fill the bar, pagers in hand, waiting for their tables. It’s been that way for thirty years and it shows no sign of letting up. I always make us a reservation, so as not to be turned away or made to wait longer than I desire for my big old fabulous meal.

Our routine is to start in the bar, with martini’s and potato skins. The bar is pretty large, with a bunch of thick, tall high tops that probably seat four to six people, depending on the people. There are TV’s, which are always broadcasting Bay Area sports, and I think even a few booths scattered about.

The potato skins at Cattlemen’s are just delightful. They are enormous, thick skinned, loaded with goodies, and, my favorite part, they’re doused with seasoned salt. I’m such a sucker for seasoned salt! MSG, MSG, MSG!!! They may be of the boxed variety, it’s possible, but I don’t think so. They serve mashed potatoes there, so, it makes perfect sense that they would serve fresh potato skins as well. Actually, I don’t even care. They are grub.

Oh by the way, that is the “small” order, should you find yourself in Dixon ordering tater skins at the Cattlemen’s any time soon. The large has something like five servings to the plate.

Once we polish those off, we migrate to the dining room where the two of us are almost always seated in a little booth, perfectly perched to people watch to our hearts delight. There are always birthdays being celebrated, which seems to involve the honoree wearing a special cowboy hat of sorts as they receive their birthday serenade (or, perhaps more likely, it is custom for the bday boy/girl to wear a plastic cowboy hat to dinner in those parts?) Yes, they sing there. Just wrap your brain around what kind of place it is and all will be well. We observe, tucked snuggly in our booth, lit from above by this: 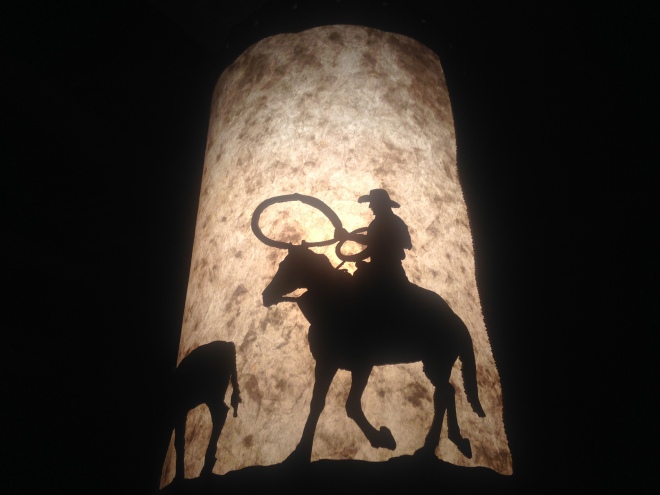 We did eat dinner in the bar once, when the Giants were in the playoffs and the guys were with us. We strayed from our routine and added this tangled mass of salty fried onion to our order. They were sliced nice and thin, coated in a light fry. I ate the living shit out of those bad boys. I did.

Cattlemen’s is a chain of eight family owned restaurants scattered throughout the Bay Area (ish, I use that term loosely), started by a guy who was a rancher back in the day. Once he had some measure of success, he decided he wanted to see the process all the way through, and he opened his first Cattlemen’s. The menu is large and in charge, truly America, in every sense of the word. They have yet to jump on the gluten free/vegan/vegetarian bandwagon. They are a steak house; getdafugout if you don’t understand what that means. You want vegetables? Order a side of squash and a salad. Boom.

The appetizer menu is a bunch of Sysco inspired (or Sysco acquired) items, such as stuffed mushrooms, bacon wrapped shrimp, artichoke dip, and fried mozzarella. With the exception of the southwestern egg rolls, they stick to American food, there are no pot stickers or other stupid items that don’t belong. For mains, they offer a plethora of beef cuts such as prime rib, New York, filet mignon, etc. There are ribs as well, and combos of ribs and steaks, of course, and then there is the chicken and fish section, the afterthought placed at the end of the menu with the salads and sides. The aforementioned two-pound steak? That would be called the Sheriff, and I am pretty darned certain that sucker flies off the shelf.

Our order, always, when it’s me and Randi, is the Pete’s special, a ten ounce sirloin that comes with all you can eat salad, a side, a little pot of beans, bread, and, wait for it….a glass of wine. For $17! AND, I never get so much as a bat of the lash from our server when I announce that we would like to share it. They have zero issue with us both indulging, with unfettered access, in the all you-can-eat items. I know that I’m a lot pathetic for being excited by that, but I’m telling you, diners get pretty abused in San Francisco, where so many restaurants consider US lucky and privileged because we got a seat in their establishment.

Dinner starts with a basket of hot crusty bread, two big hunks of it, one for each of us, and salty, room temperature, easy to spread, butter. 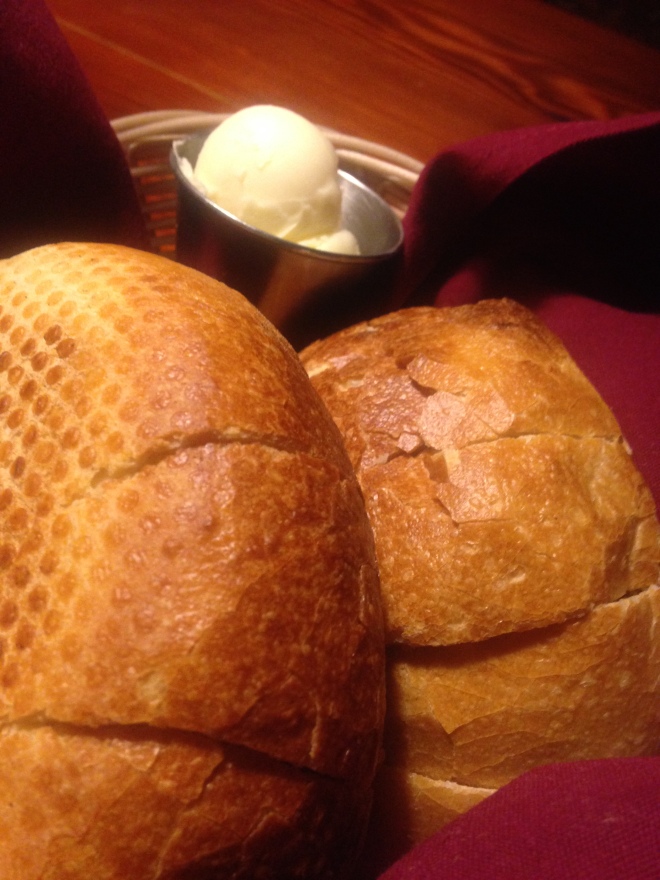 Soon enough, this big, fresh bowl of salad arrives; romaine lettuce topped with cherry tomatoes, croutons, red onion, and cucumber. We each get our own little dish of dressing; me, blue cheese or the occasional honey mustard, Randi, thousand island. 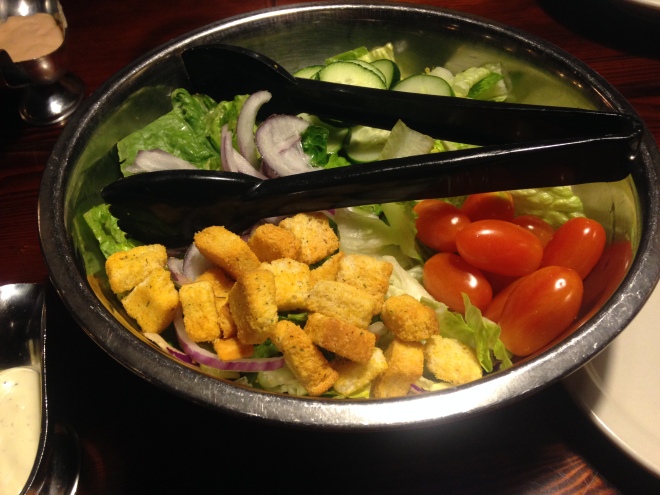 Then Pete arrives. Honestly I think the steak is my least favorite part of the meal. It’s corn-fed, and kind of bland as a result, but, he always comes nicely charred, and he always comes cooked to our specifications. Actually, on second thought, I am pretty darned fond of him, I really am. The baked potato always rocks my world, with its salted exterior and full on personal ramekin of sour cream and green onions. I’m not sure why that ridiculous garnish is necessary. Seems like a waste of a perfectly good green. The table is, of course, set with steak sauce should you want some.

The wine list is all bottom shelf Safeway, for the most part, so we just own it and order a bottle of the Ravenswood cab. The whole spread runs us something like $30/pp, including tip, and in true steakhouse fashion, we practically need to be wheeled to the car on a gurney, we’re so full.

Twice, I’ve had dessert at Cattlemen’s. They are again, of the Sysco variety, lots of cookie & ice cream choices, a cheesecake, other cake…you get the idea. I think my first dessert experience was a run in with the “Pete’s Pan Cookie” which consisted of a hot chocolate chip cookie (or two?) topped with vanilla ice cream and if I remember right, fudge. My second encounter with the dessert menu ended with me eating a hot brownie sundae. It’s all satisfying stuff in a giant serving, heap on the uber sweet cheap calories, kind of way. 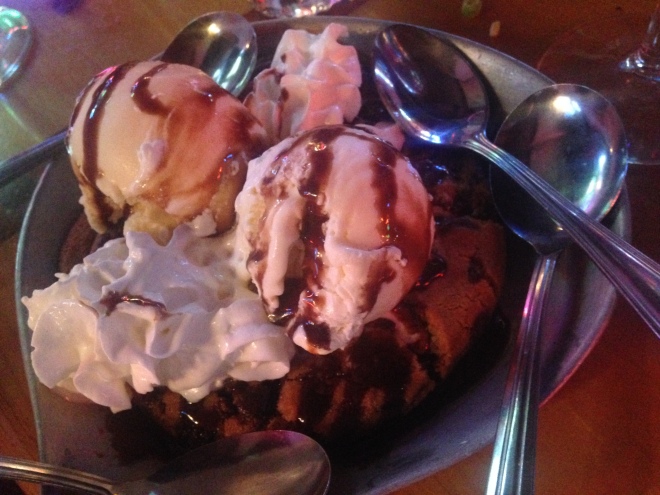 I did recently make a trip there with family, on our way back from Tahoe, and there were some ordering mishaps. As in, there was a seafood order. So, you know, if you are at steak house in a barren part of inland California, please, use your brain and order steak. King crab legs? Well, you’re just stupid and that is on you.