A friend in the states hooked us up, via email, with a local in Seoul. This woman had lived in the US as a child where she learned English from my friend’s mother. She was willing to meet with us and show us around. Any local who wants to take time out of their life to meet a stranger and give them the insiders view is a bit of a saint, right? (pun intended, you’ll see).

We started that day with a walk to Chicu Chicu, a pet café that is located about a half a mile from the Ramada Seoul. Unfortunately, every time we wanted to go there, it was closed; this day was no exception. We reversed course and headed back to the hotel where we grabbed the subway for the rendezvous with our Korean hosts.

I don’t know what I was envisioning, maybe a woman around my age, one who was really into food and beer and Seoul, and, well…fun. What we got instead was a rather serious woman (who possibly could have been my age but I’m guessing she was closer to her mid 40’s) her slight, limited English-speaking husband, and her fairly silent 14 year old. They walked us to lunch, where we would try Samgyetang, a chicken ginseng soup that is traditionally served in the summer, to help Koreans replace the nutrients lost while sweating.

They ordered for the table. We all got our own dishes of samgyetang, which was unusual for the four of us, as we prefer to share something and move on to the next place, where we share something else, and so on and so forth. I was pretty bummed by the lack of alcohol at lunch; it was not even discussed and, not wanting to be rude, we all went with the flow. One little thimble of some sort of rice wine arrived, but that was it. The samgyetang itself was a rather bland and filling dish…it was juk like (in fact I’ve read it is a form of “guk” which I’m assuming is the hangul way of writing juk?) which is to say, it was chock full of bloated, broken rice. I LOVE juk. I have zero problem with juk, but that bowl of water-logged rice was super filling. None of us could finish ours.

Kindly, and in keeping with tradition, our hosts paid for our lunch, and then we were off to see some sights. We walked a block or two to Gwanghwamun Square, a rather famous and well tourist traveled part of Seoul, where two statues sit along a grass arcade. One statue depicts King Sejong, the guy who invented the Korean alphabet, the other, this fellow, Admiral Yi Sun-Sin, Seoul’s most famous Naval Commander and smacker down of the Japanese.

They took us a few blocks further, to the Insadong shopping area; the pier 39 of Seoul, a long, very crowded, promenade of tsotchke shops and street vendors. 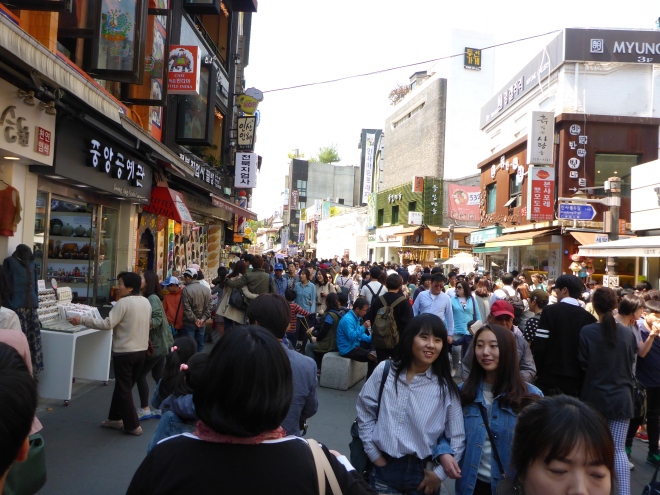 Our hosts brought us to a store that sold silly Korean souveniers, nothing I would want to bring home to anyone, but, I felt pressured to buy something in order to satisfy our locals, as they were following me around and watching my every move, eagerly awaiting my first purchase. I bought some red ginseng for a woman here in the states who swears by the stuff.

They took us to a music emporium that I had read about and wanted to visit. This place was three or four stories, packed full of guitars, drums, accessories, etc. I thought it would be awesome for the boys, one of whom plays guitar, the other drums, but it turned out that it was full of cheap crap, and the well made stuff cost just as much as it would back home, plus schlepping and shipping.

We went to a few more places, each one shilling the same, or worse, crap than the one before, when I suggested that we buy them a bingsu for dessert, which is a shaved ice and red bean (traditionally) concoction that I truly wanted to try, but also, I wanted to stop being dragged to stupid shops and even more so, I wanted a beer, and further, I thought dessert might be a natural ending point for this torture fest. As we searched for a bingsu place, our host bought us some of this really chewy, hard, nougat-like candy that I loved (though it is not for the soft of tooth). 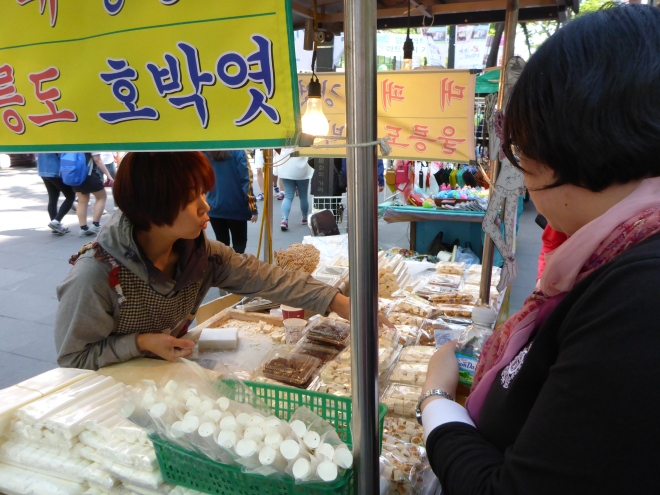 Unfortunately, our first attempt at a bingsu bombed, and we found ourselves wandering aimlessly and silently back through the Insadong streets, unsure of how long we were supposed to endure this meeting or how and when it would mercifully come to an end. Around 3:00PM I was getting wild looks from my travel companions, who were all as desperate for a beer and desperate to stop looking at crappy souvenirs as I was. We convinced our hosts to stop for tea (for them) and beer (for us) and fortunately, the nearest place that sold both also sold my coveted bingsu.

Things were improving, or so we thought. We had beer, we had a delicious dessert; we had even twisted the slight, silent, husbands arm until he imbibed with us. The wife was being all judgy about it, and I’m pretty sure she wanted to call the police when Randi left to order round two, but, we finally had a tiny bit of social lube and some piece of mind. It was while Randi was gone that we were given a “gift” from our host, something she brought just for us. I was touched. It appeared that she had made us a pamphlet of translations, information that might help us navigate Korea. Then my brain began processing the words on the page. Why do I wet the bed at night, it asked. And what’s up with my insecurities, and my paralytic fear of crowds? Well, the answer had been right in front of me all along. It’s my lack of understanding of God, my unfamiliarity with him, you see, and this kind woman was here to introduce us, as it were.

Errrr…..not only had we just endured the most torturous, impossibly un-fun four hours of our lives, but now we had to tolerate an attempt at religious conversion? proselytizing? I wanted to throw the table and run away, or to throw myself on the ground and sob, fists pounding, feet kicking. I wanted to throw my beer in her face, or mine. Someone’s. I wanted to grab her kid and set him free on the street. I wanted. Instead, I tried to politely change the subject. Unfortunately, she was NOT having that. She would not drop it. I was embarrassed for her, I was embarrassed for me, I was embarrassed for God. It was all so embarrassing and awkward. After a completely unbearable ten minute monologue (her), I blurted out that we had to be somewhere in a half hour and I asked if she could please tell us how to get there. She was crestfallen, to be sure, that we did not ask her to take us to her church, the twelfth and final step in the pamphlet, the part where she literally was to bring us to her congregation for a meet and greet.

They walked us to our destination, Brew 3.14, the pizza place we had tried to go to a few days before but had found it closed. http://www.tripadvisor.com/Restaurant_Review-g294197-d4826338-Reviews-Brew_3_14-Seoul.html This time it was open, thank goodness! We said our goodbyes to our hosts, who didn’t even bother to respond to the thank you email I sent the next day, and, so be it.

Brew 3.14 is run by a French dude? French, if I remember right. He was kind of a jerk. When we arrived he basically told us to get lost, because he wasn’t ready for us, even though it was past their published opening time (really? just serve us a drink and go about your biz). So we wandered about, looking for a place to numb ourselves to the days events, when we stumbled upon the GU pub. https://www.facebook.com/theoneisone?ref=br_tf

We walked up a flight of stairs to enter into a little sanctuary of sorts, manned by a guy named Kim, who was sitting behind his tile bar, surfing the internet. We ordered some shots (always confusing, with the whole bottle service thing) and worked on getting the foul taste of being hustled out of our mouths. Kim turned out to be a delightfully friendly man who was eager to talk to us and drink with us and make videos of us for his facebook (with our permission). He was the antithesis to the religious crusaders who had just dropped us off; a welcome breath of fresh air.

When we returned to Brew 3.14, the French dude was sitting with headphones on, eating his dinner. He totally ignored us when we walked in, which is pretty hard to do because the place is tiny. Like, he was two seats away from me. Luckily, there was someone else there to step in and be nice, Jaemin. We got some beer and wine, and patiently waited to order.

The options are limited at Brew 3.14. As I mentioned the place is tiny, with maybe two burners, so they can only make as much sauce as they can make. I would much rather that than some enormous menu full of mediocre nonsense. We got a meat pie, which tasted like it had Lawry’s meat sauce on it, (or ghetto spaghetti, as I lovingly refer to it at home when I make it) which I adore, so I was happy happy happy.

We also ordered a plain cheese and, upon review, I see we also got some sort of chips and “salsa?” I don’t remember that, but there is photographic proof, so… 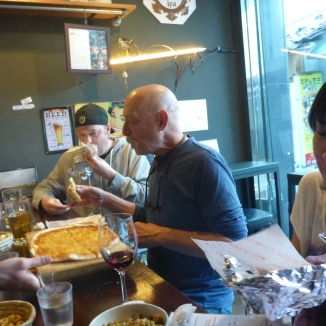 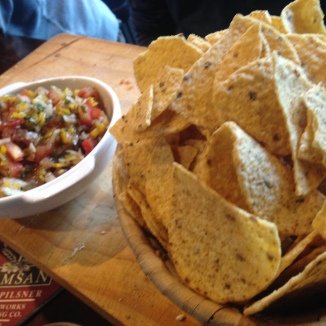 The cracker thin crust of the pizza, the hormonal/emotional fulfillment of eating carbs, red wine…I was starting to feel whole again. Even the French guy started to warm up. I was seated next to a regular, a Japanese man. He didn’t speak much English, but he was sweet as pie, and at one point he disappeared and then returned with a sundae rolled in a crepe, one for each of us. He owns the place that makes them, it turned out. They were delicious, and the kind gesture of him going and procuring them for us as a little gift almost made up for the days atrocities. Almost. 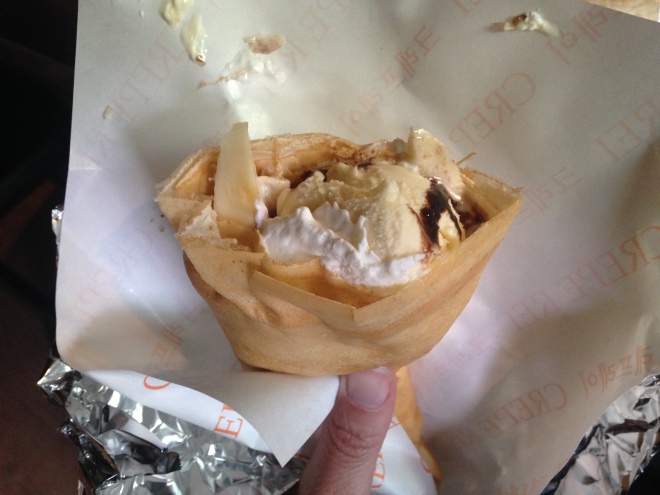 Not yet feeling fully cleansed of our soul rape, we all felt the need to commit multiple acts of hedonism in the form of mass consumption. The boys found a bar in Insadong, and us girls hit the streets, armed with credit cards and a burning need to purchase all manner of non souvenir variety of Korean goods. Little socks, watches, cosmetics…we were whipped into a spending frenzy. Also, this guy…hereby known as “Captain Korea,” 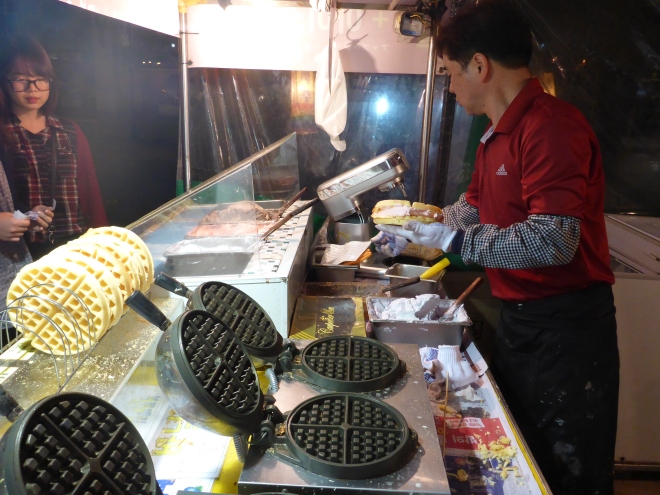 and then, not feeling quite piggish enough, we headed to Mr. Ho’s, for a final cleansing of the spirit, as it were.