Seoul, Day 2. The JSA, cocaine booze, and the magic of Korean fried chicken. 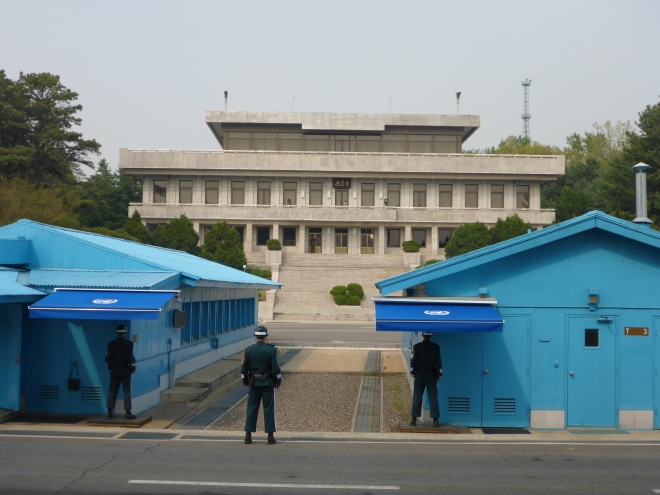 Our DMZ tour got interesting as we approached the 38th parallel. First, there was a stop in what was seemingly the middle of nowhere for a set lunch of bulgogi, which was included with the tour (vegetarians are accommodated). It was just OK; There was a decent banchan spread of kimchi, mung bean sprouts, etc. with an endless refill bar, but the bulgogi itself was fairly bland and needed both hot sauce and kimchi to make it flavorful. 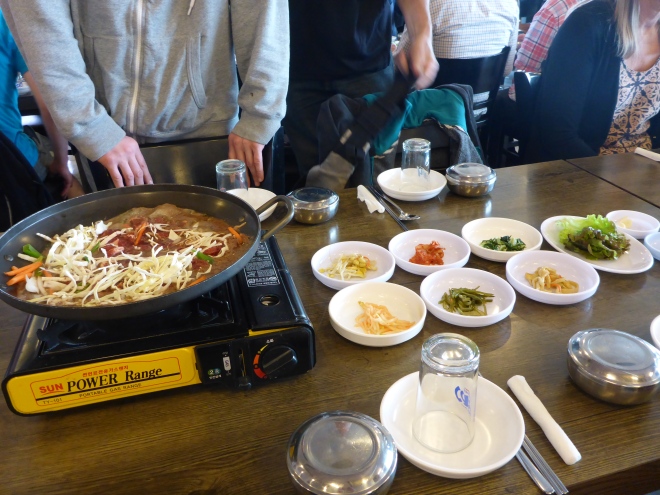 We were there for an hour or so, giving us time after our meal to wander next store to a gas station/convenience store, where we discovered these for the first time:

Definitely one of my favorite Korean treats. Little biscuit like cookies with a glob of soft chocolate inside. We bought these to carry in our backpacks every chance we got.

The JSA wasn’t far from the lunch restaurant. When we arrived, we were on a bridge lined with spiked tank stoppers (I think that’s what they were) sitting in a line of busses waiting to clear a security gate/hut. I don’t remember exactly how it went, but the bus was boarded by a couple of different soldiers at different points, doing head counts, checking passports, etc. The last soldier to board was an American soldier and our liaison into the JSA. He introduced himself and explained to us that there are certain rules that must be followed. The two that I remember are that we had to put our cameras down when we were told to, and that we were not to gesture towards the North when we were in their view, because they were filming us and we were not to give them any fodder for propaganda videos.

We rode up a windy road with woods to either side, where we weren’t allowed to take photos because it could compromise the base if the North were to see how it is set up defensively. Apparently the woods to the sides of the road are completely littered with mines, so many that they soldiers in the South have lost count and track of them. Interestingly, there are call boxes along that road, in case someone escapes from the North and successfully clears the mine field, they can call for a pick up.

We could see a tall flag pole off in the distance and it was explained to us that the South had erected a flag pole, and not to be outdone, the North erected a taller one. It was also discovered that the buildings that surround the North’s flag are fake. The town, known as “Propaganda Village” was put there by the North in view of the South to encourage defectors (and hide artillery, etc). The buildings are simply concrete shells with painted windows, the electricity timed to go on and off at certain times of day; activities are performed (like sidewalk sweeping) to make it look legit, but it is all just theater.

We arrived at a parking lot and went into a building that had a gift shop and some ROK soldier mannequins. We went into a small auditorium where we were told that the English speakers should sit to the right, Japanese speakers to the left. A slide show presentation commenced, during which two different guides spoke at the same time, one in Japanese, one in English. It was pretty difficult to make out what the English speaker was saying, but what I could make (about the history of the conflict) was interesting.

After that we just milled around the gift shop and the parking lot and the building for a while. We were waiting for another tour bus to arrive to go to the JSA with us. The gift shop was pretty lame, but we did end up buying “North Korean wine” and a magnet out of boredom. We chatted with the American soldiers for a while too. They were really nice guys.

Finally, we boarded a new bus and were taken the JSA, where we were led into a building that was built for South Korean families to have a place to meet with the family members from whom they were separated who are currently stuck in the North. Sadly, the building has never been used. We were told to line up in two single file lines, to follow the soldiers outside, and we were reminded again not to make any gesture of any kind toward the North, and not to take photographs until we were told it was OK.

It was pretty cool, walking out there. I know a gazillion tourists do it a day, and that the real threat/danger is actually when you are in Seoul (missiles are set to strike Seoul within 90 seconds of detonation from the North) but still, it was awesome. Everything out there was extremely still. There was no wind, the ROK soldiers stood with their backs to us (facing the North in a modified taekwando pose) totally still, totally silent. It just had this eerie, militaristic feel to it.

In front us were five little buildings. Some belong to the North, others to the South; one, a little blue house in the center, for both. We were led into the center building where the four of us walked to the back of the room because we were in front of the group. There were two ROK soldiers standing in there, in a perfect, unflinching stance. We actually thought they were mannequins at first and thankfully did not touch them, as we were later told that they would “take us down” if we got within six inches of them. The American soldier we were with then explained the room to us. The table at the center of the room is where the two sides sit to have diplomatic talks. The mic on the table is always on, always recording everything that happens in that space. He also explained that where my part of the group was standing, the back of the room, was North Korea. So that was it. We were standing in North Korea. Pretty cool, actually. Not a whole lot of people can say that! They gave us some time to take pictures in that room and then some back outside, and then we boarded the bus again. 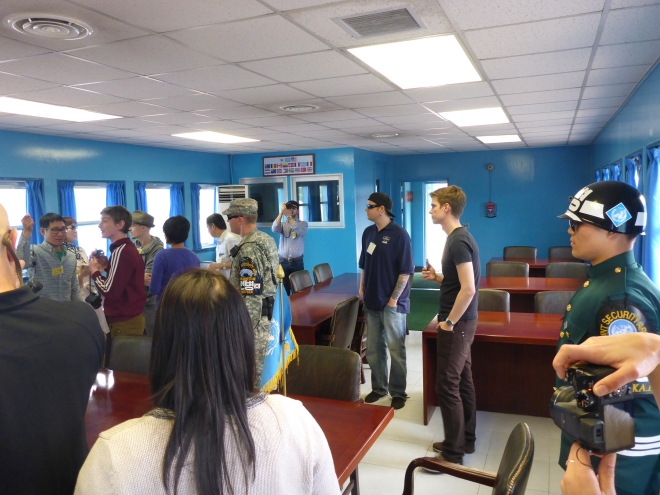 On the way out, they took us to one other site, an observation tower, where they don’t normally take tours. We got some good views of the absurdly tall flag pole, the markers in the woods that identify where the border is, and of the observation post itself.

After that we were driven to the Bridge of no Return, which is where prisoner exchanges were conducted in the 50’s. We just drove by that, taking pictures from the bus, and then, we were driven back to Seoul.

Back in the city, the food tents outside the hotel the tour companies use as an office were in full swing. We sat in this nice little square that was right outside and ordered some beers and…a pizza cone! It was delightful. It made all of that yucky tour bus feeling go away. Then, we got another one as we plotted our next move.

We decided to take the subway to…I don’t know where, unfortunately. I don’t remember the name and I can’t find it in any of my guidebooks, which is a tragedy, because it was an amazing part of Gangnam. We ended up in bright, windy alleys, full of life and energy and people sitting at tables topped with huge bubbling communal cauldrons. It was the perfect antidote to a day spent on a tour bus. We hit three bars there; the third was a place with refrigerators around the room with booze in them, where patrons just pick what they want and self-serve. This is where the cocaine booze was discovered: 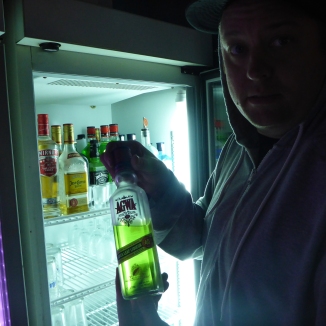 Whatever was in that bottle, cocaine, moonshine, who knows; it grew hair on my chest. Later, I went to the bathroom with a bottle of beer in my hand, only to be chased down and berated by an ajumma, whose yapping was indecipherable to me. My only guess is that she thought I was trying to throw away my beer bottle so that I wouldn’t be charged for it. Or maybe she was telling me she liked my jeans. Who knows.

Unfortunately, the cocaine booze did not do its job, because Mikey went down to jetlag shortly thereafter, when his first sleep in a bar, for this trip, suddenly struck. 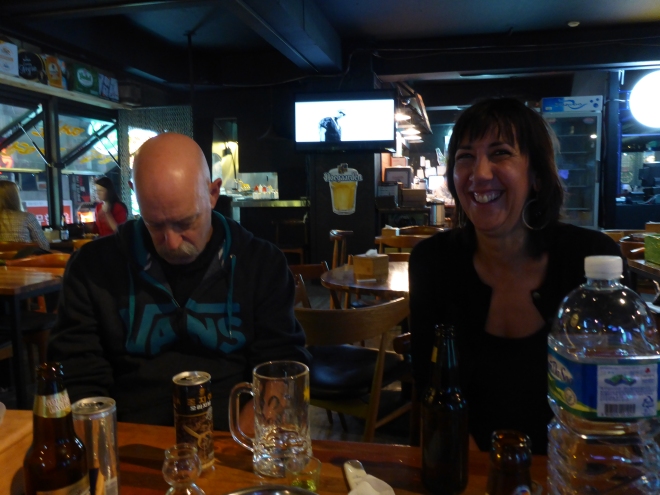 We headed back to the Ramada and deposited him, then walked down the street into a small little spot with people eating and partying inside and out. 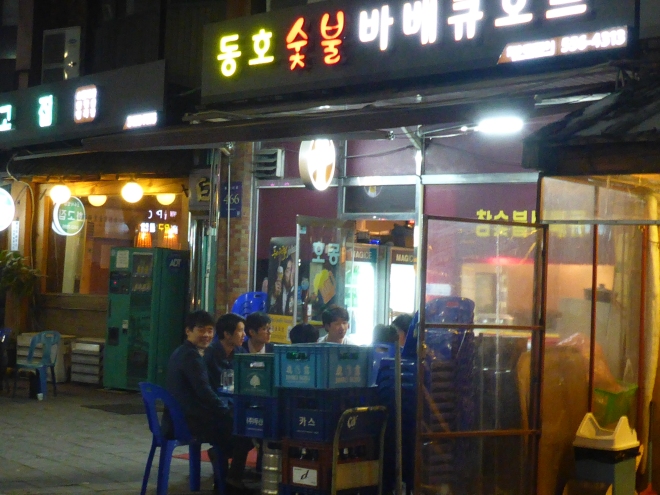 We sat and ordered beers and were then joined by a hammered Korean man, who we loosely understood to be a Mr, Ho; he ordered us a round of Korean fried chicken, had a pantomime conversation with us that included lots of air-weightlifting, and tried to feel Randi up a time or two. The fried chicken there was my favorite in Korea (and we had a LOT). One, it was just piping hot and salty, but two, it had distinctly Asian flavors in the batter (anise, cinnamon) and it just absolutely made my day. The chicken was accompanied by a terribly satisfying omelette, served with sweet ketchup (reminiscent of our beloved Polish zapiekanka) and the mandatory cabbage salad with corn and thousand island. Perfection.

Mr. Ho was getting a little too rapey, so, we left and ended our first full day in Seoul with a little bedtime yoga.