June 1-15 is Dine About Town in San Francisco. Dinners are $40 for three courses, lunch is $18.95 for two, at some really incredible restaurants. Our first DAT reservation of the season was lunch at The Cavalier, a newish Gastropub in Union Square. 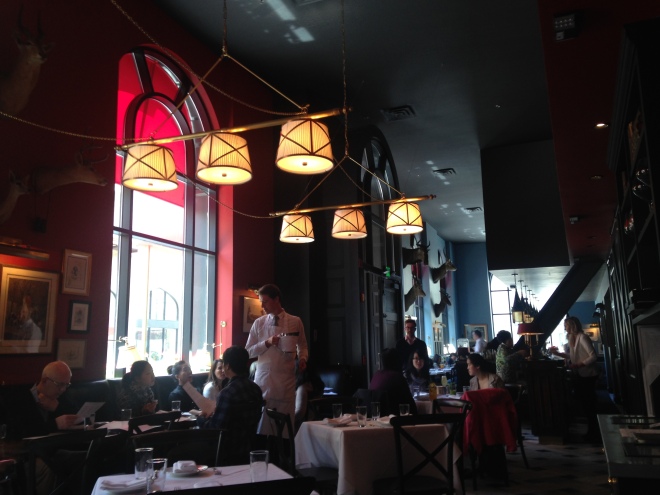 The design is modern yet warm, with accents evoking the English countryside; bridle bits attached to tufted leather booths, paintings depicting fox hunts, taxidermied deer heads and the like adorning the walls. It would be a  great choice for anyone who wants a little more space or who just wants to be able to hear their dining companions. 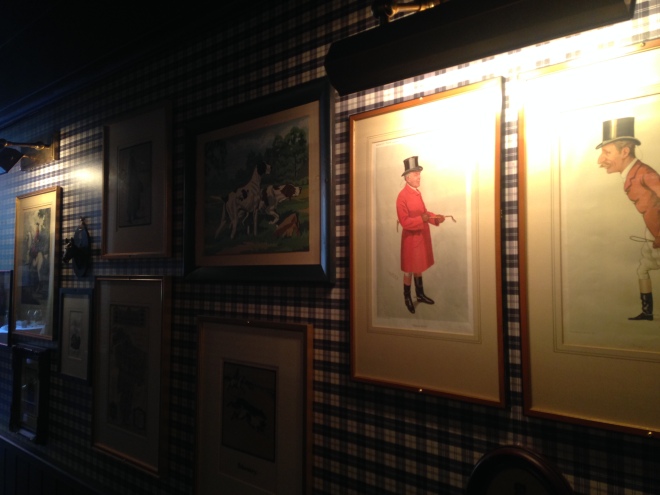 We ordered solely off the dine about town menu with the exception of drinks. I started with the Whiz Bang cocktail, and while I was bummed to see that it cost $14 (not unusual in SF, but still not my favorite), I was delighted when the drink arrived and it was in an appropriately sized martini glass. So often the $14 drink comes in an insultingly small cocktail glass, or one that is inhabited mostly with an enormous ice-cube, but the drinks at the Cavalier are a size proportionate to their cost. I also hate ordering a pre-designed drink off of a cocktail menu only to get an ounce of booze in my drink. I like to be able to taste my alcohol. The Whiz Bang, a scotch, cherry, vermouth and absinthe concoction was the perfect combination of brown alcohol strong, cherry sweet, and licorice.

We ordered a round of the Quail Egg Mayonnaise to eat while we worked on our opening lunch cocktails. At $2/per, you really can’t go wrong. The quail eggs arrived and threw all of the ladies into a bit of swoon because they are just that damn cute:

Amirite? Who could resist that? The eggs were served perfectly soft-boiled, at room temperature. I tried to get as much of the little bite into my mouth at once, loving the combo of runny yolk, bright, acidic micro greens, and salty, crispy shallots. That is a great little dish, my friends. Do yourself a favor and throw down $2 for one of those, post-haste.

There were five of us, and three app choices on the DAT menu, but no one was particularly interested in the green salad option so we ended up with three orders of the Hen & Egg Hollandaise: 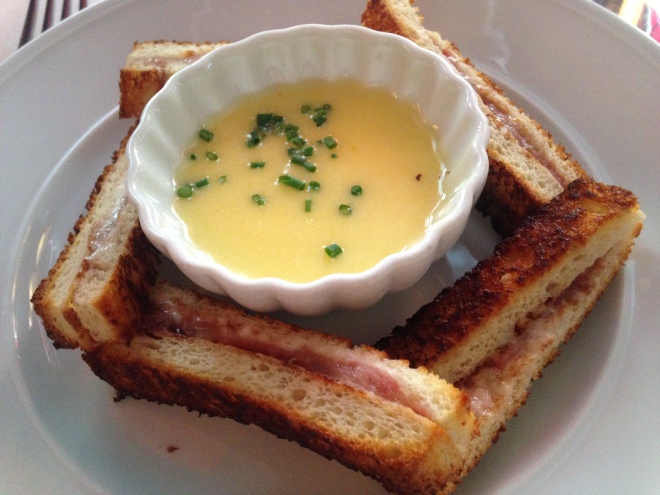 Um. The Hen Egg Hollandaise. Life. Altering. I’m serious. Those little ham and cheese sandwiches are all warm and a little gooey, pressed between the most buttery, perfectly browned brioche. The hollandaise, bright and creamy. The combo-amaze. Hands down my favorite dish that we had that day.

The other two folks in our party went with orders of the Farro and Roasted Beets:

The Farro and beets were, for me, meh. The dish was really earthy, which I like, and there was some nice crunch from pepitas, but the dressing was really maple syrup sweet and I just prefer acidic dressing. It was a big hit with the guys who ordered it, and it did not suck, it just did not rock my world. Also, I was in the throes of a ham and cheese sandwich orgasm at the time and nothing short of cash raining from the ceiling was going to pull me out of it.

We ordered another round of drinks to have with our mains, mine being a Pimm’s cup that arrived in the most delightfully large glass: 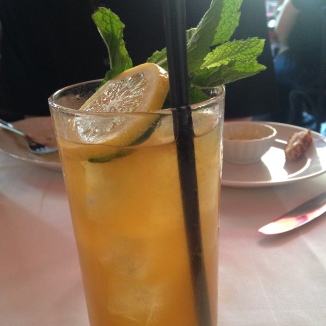 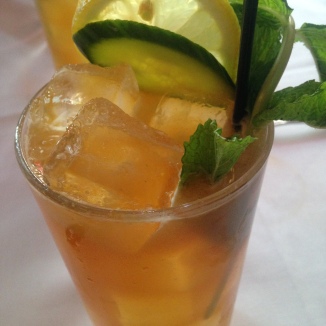 Our entrée’s were hit and miss. Jake got the lamb sandwich, which was definitely the least popular item on the table. It was composed of chunky slices of lamb topped with one huge gob of eggplant, all soaked in oil olive. It just made the sandwich really greasy and difficult to eat. That guy was a total let down.

The presentation of my fish and chips was just adorable:

I mean, what’s not to love about that tiny little mason jar with its little baby spoon perched on the side? The fish batter was nice and light, but the fish tasted as though it hadn’t been seasoned at all, which made for an overall bland dish. Chips were good, no issues there. That pea salad? That was my second favorite part of our lunch. It was SO fresh, and green, and bright, and it was just fun to eat the combo of the crisp little peas along with the crunchy, grassy pea shoots. That is one helluva side dish.

Two people got burgers and were happy with them. I just had one bite of one. It was good; juicy, well seasoned, housed in a nice soft toasted bun.

That dessert there? That thing was phenomenal. I’m pretty sure I personally ate an entire pound of butter in my five or so bites of it, but dude. So good. So buttery, so crunchy from all of the crushed nuts, perfect amounts of hot peach, nice soft cream on the top, mint scattered about that just took it to another level.

Someone on the staff, the bar manager, I believe, came over and told us we were his favorite table because we were boozing at lunch. He sent us out a round of fortified wine on the house. Some adorable young guy brought it out, and told us the story behind the wine, which involved an old timey village (ancient village?) dysentery, death, crying, and tears sprouting trees. It was pretty cute, him telling us the story; then he told us the wine had a whopping 30% ABV (!!!). It tasted like minerals and wood and alcohol (my favorite!) and it was a pretty great way to end what was overall, a pretty great meal.

Two other notes of importance on the Cavalier…it is located right behind the Westfield center, which means that you can take Bart almost directly to the restaurant. It also means that if you are schlepping around union square shopping, and you want a nice strong drink and a delicious snack, the Cavalier has your back.