Bitingly cold, desperately grey, and bone chillingly damp, Chicago felt tougher, grittier, and somehow, more grandiose during our recent visit than it had on previous trips. Perhaps it was the moments when the sun broke through to bathe the city’s magnificent architecture with ethereal light, or, the vision of utterly giant buildings, disappearing into a thick stew of fog, or maybe, even, the glint of gold tipped skyscrapers, jutting into the heavens like elegant bottles of champagne, but, on this trip, Chicago just seemed more grand, more 30’s mob, more…boss, than ever before.

We booked accommodation at the Fairmont Millenium Park http://www.fairmont.com/chicago/,  which sounds better in writing than it was in reality, an underwhelming, saggy old broad in serious need of a nip/tuck. We had bigger problems than the decades old décor of our suite, its awkwardly heavy sliding bathroom door, lazy shower, and defective televisions; see, the NFL draft had come to town, congesting the roads so heavily that our twenty-minute ride from the airport took an agonizing hour, a situation that threatened our 5:00 reservation at Fat Rice, a meal I was NOT about to miss for a second time (my last pass had me in Chicago on a Sunday, when FR is closed). We made a courtesy call, and the restaurant kindly agreed to accommodate us (I did add, hysteria in my voice, that we flew in from SF JUST for this meal. You know, for good measure) http://eatfatrice.com/

Arroz gordo (translation: fat. rice.) a layered rice concoction served at Macanese weddings, et. al., is the signature dish at Fat Rice; not cheap at $48 per, but plentiful enough for two people to share, if two people could be happy ordering only one dish at a restaurant (a quality I do not possess)

Not gordo’d enough, we added an order of blistered asparagus with fried shallot, sweet, chewy, Chinese sausage, and chiles 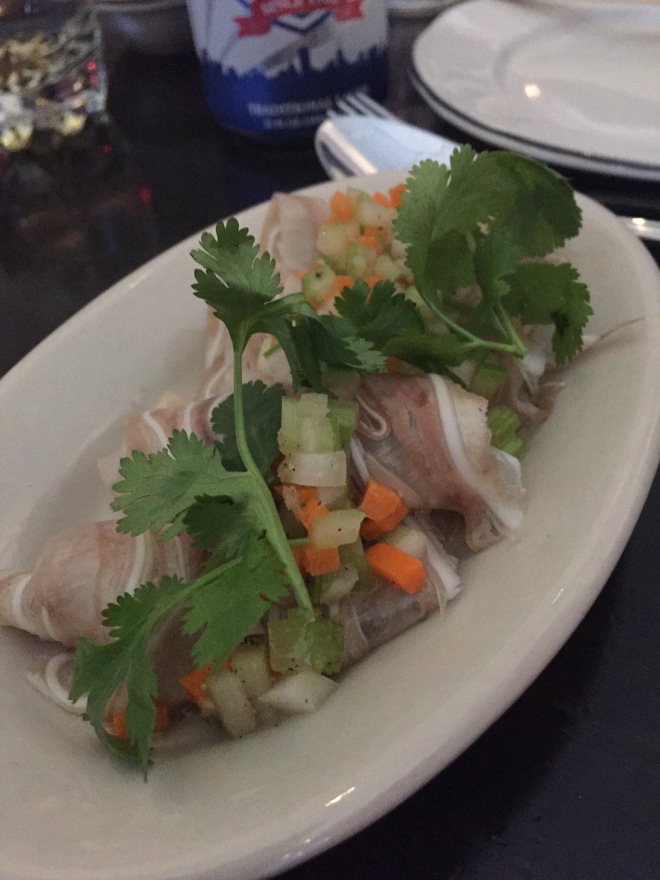 And this lovely tuille of potstickers, filled with identifiably large hunks of veggies and served with a side of brightly acidic ponzu, beautiful both to the eye and the palate. 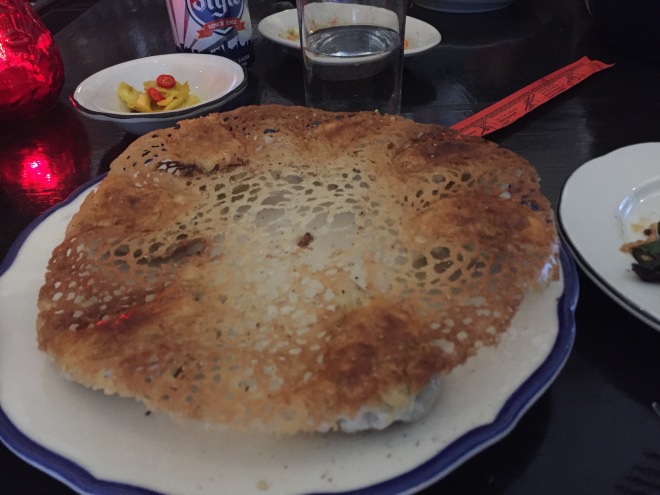 Fat Rice makes their own hot sauce at $10 per bottle, five of which made it back across the country to San Francisco, but not without a bit of drama, TBD

Properly fed and with FR checked off the old bucket list, we went for a brisk stroll through Logan Square, Chicago’s hipster hood, arriving shortly at Longman and Eagle http://www.longmanandeagle.com/, a great place for a serious cocktail and snack, but on that night, the vibe was not right, so we made our exit and continued on, attracted, neigh, mesmerized by the glowing eyeball lights of a neon owl ahead. http://owlbarchicago.com/

Unsure of what we would find within, we hefted open the Owl’s solid wood, windowless door to reveal an absolute charmer of a bar (we were later informed, by multiple, unrelated locals, that late-night, the Owl transforms into an absolute shit show, it being the last available place to make bad decisions, with a 4:00AM close), and seated ourselves across from one excellently odd, plastic rocked, waterfall (previous incarnation, Chinese restaurant) and Chrissy, the sweetest of bartenders.

Cocktails ran $10 a piece and while our aviation was too sweet for my taste, that’s the reason I rarely order them out in the wild, as that generally tends to be the case.

Chrissy directed us to our next stop, the General: 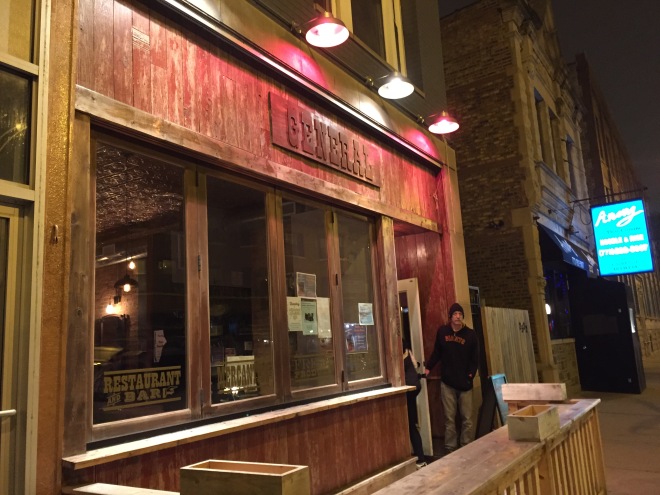 There are plenty of noshables at the general, but having just ate, we went light with a demure order of three taco’s and a dainty side of brisket “soul nachos.” 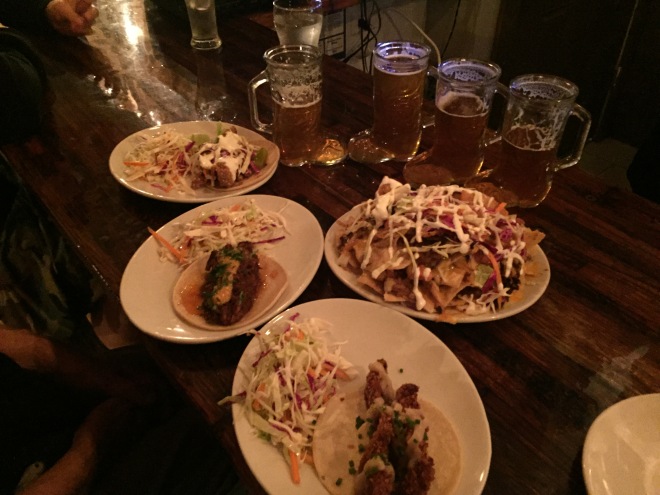 the boys were fond of the fish, which I poo poo’d in favor of the nachos, devouring the rich, stringy brisket and airy, exceptionally crisp, chips with disturbing gusto

An ill-fated (translation: unnecessarily long and unfruitful) trip on the El brought us nearly back to our hotel, followed by an embarrassingly short cab ride, topped off by a night filled with the horrifying sounds of three people absolutely destroying any hope of quiet I had, filling our dumpy old suite with a chorus of chokes and snorts, all the night long.