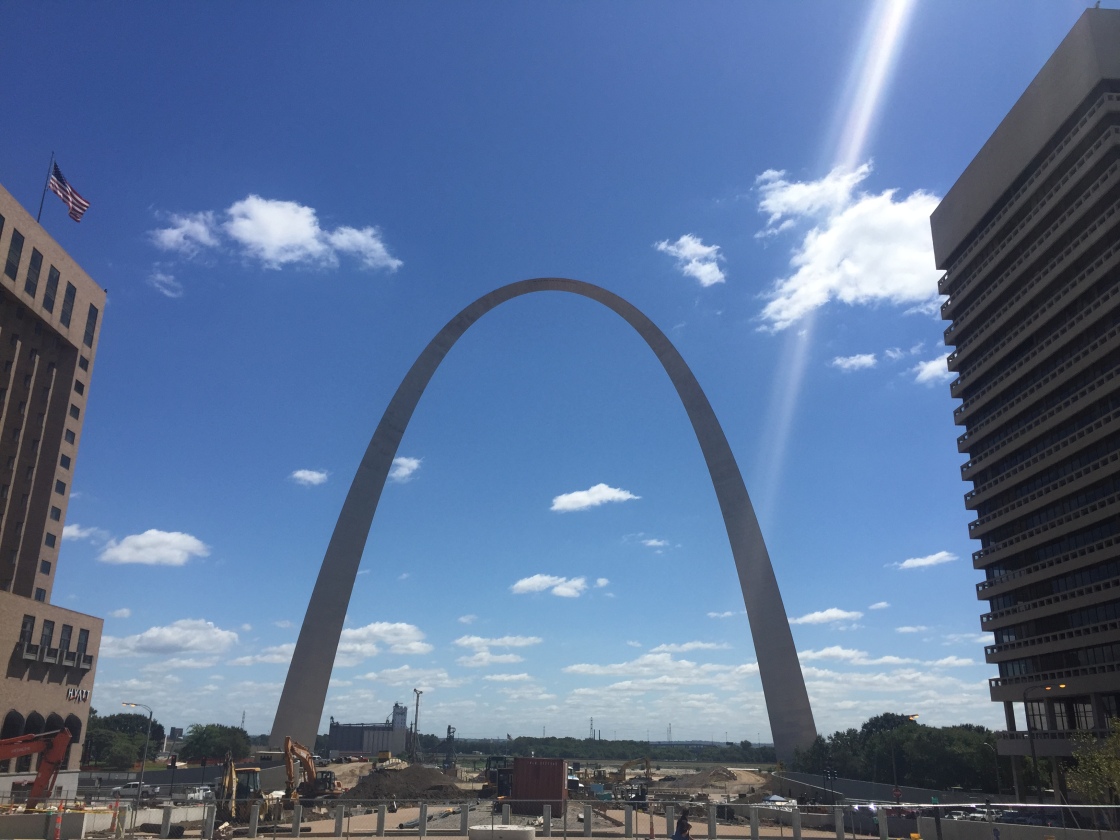 St. Louis: The Arch and The Lobstah

On all trips, there is a flurry of activity on the final day, as we try to accomplish the last of our goals before heading to the airport. St. Louis was no exception, and on this, departure day, we were perilously delivered 630 ft. into the atmosphere, via tiny egg car, for a spectacular view of STL from its famed Gateway Arch. Of course, there was a hotel bloody Mary first, as any journey that combines claustrophobic spaces and heights should not be embarked upon in a sober state

Tickets to the Arch are available for purchase both online and at the Old Courthouse(during construction of CityArchRiver, at any rate), which more or less sits across a giant square from the Arch itself. 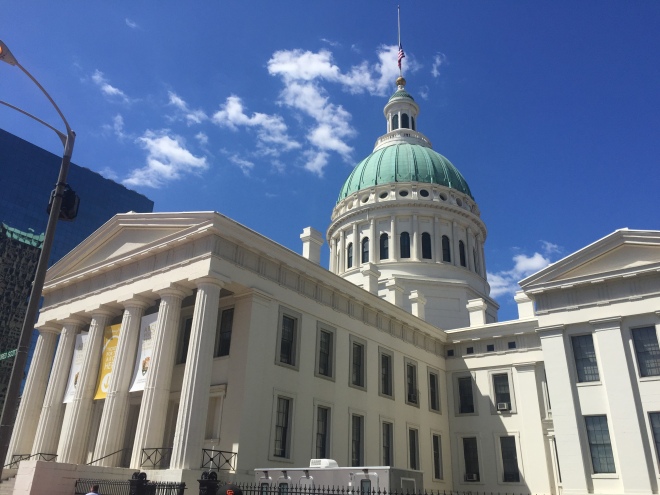 The Old Courthouse is noteworthy in its own right, a spot of historical and human rights significance, where Dred Scott sued to end slavery and Virginia Minor battled for women’s suffrage. Built between 1839 and 1862, the Courthouse façade was modeled after St. Peter’s Basillica (so too, the Capitol Dome).

The interior is surprisingly ornate, dominated by one enormous American flag hanging within the center of the dome space, amidst circular railings dripping with bunting. 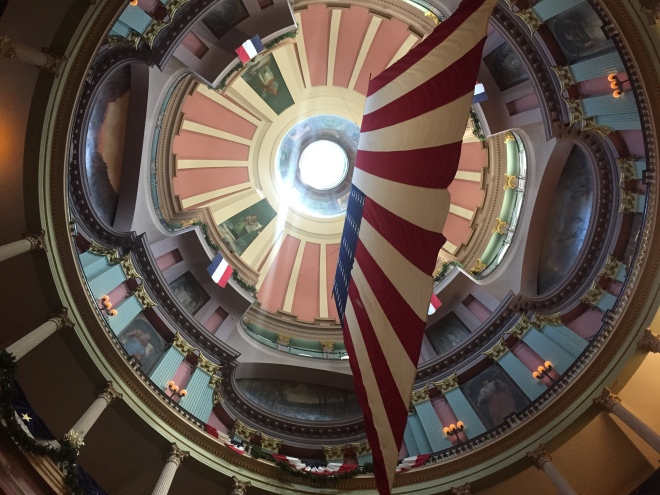 Over in the visitors center, a very informative young woman informed us that the ride to the top (tour name: Journey to the Top) would run us $13 per person, consume about 45-60 minutes of our time, and, thank you baby Jesus for small miracles, would not require participation with a guided group. One of the tiny vehicles used to transport guests to the top is on display in the visitors center, a visual reminder that the trip is NOT, I repeat, NOT for claustrophobes, giants, or the morbidly obese. 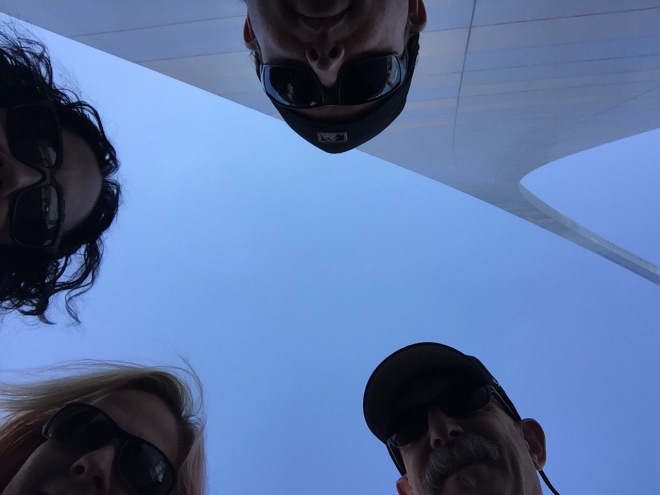 All right. Let’s get into that thing

The entryway to the arch sits at the base of one of the legs; it’s a ramp, really, down to a subterranean level, where the Arch Museum resides (Museum-only tickets, $3/adults, free for children under the age of 13), for those taking the Journey to the Top, there is a quick security stop (metal detector, xray machine) and then, a wait on this fairly creepy set of stairs, if you’re inclined to find creepy shit where it doesn’t, in fact, exist 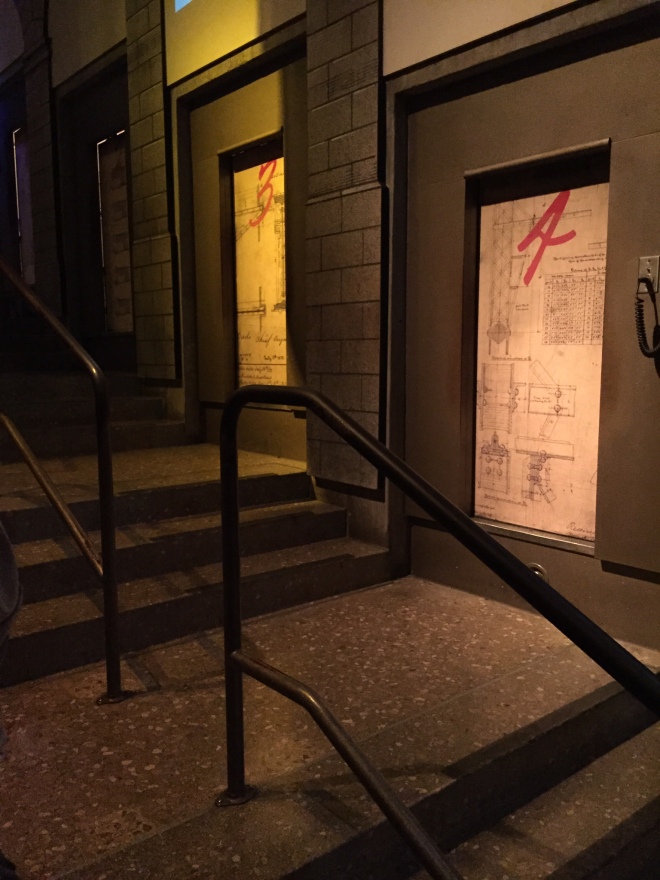 visitors are distracted from the wait by a short video about the history of the arch. Soon enough, the numbered doors open to reveal a capsule that would have given the Apollo crew pause

(I did have headspace once seated). 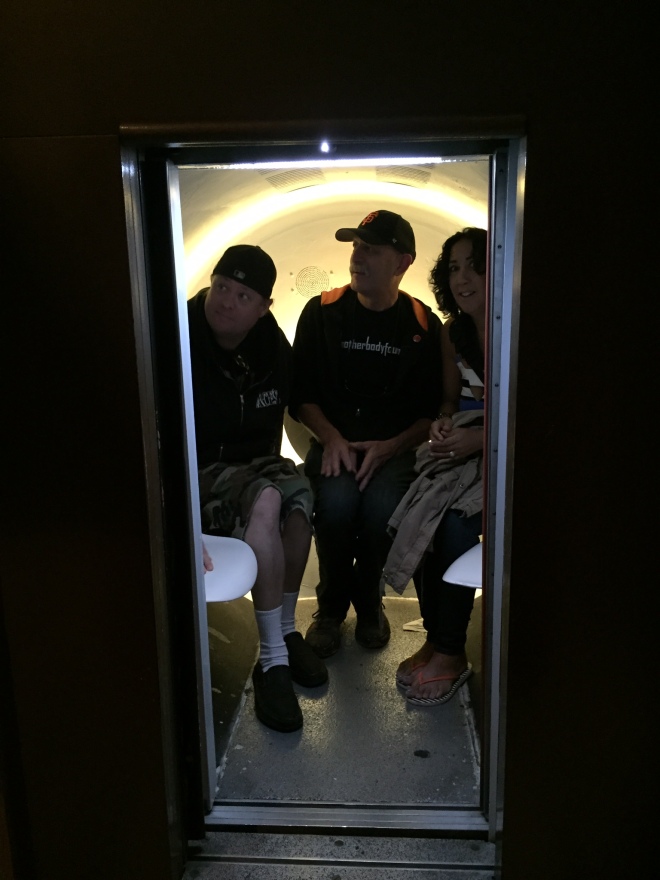 I’m not even in that picture, just by the way. Another human was packed into that can before it was sealed up and sent on its way. The door is glass, so as to give some feeling of freedom, but the view on the way up is a wall and moving mechanics (cogs?), both located about a half inch outside the door, so, it really just serves as a reminder of how trapped you are. It was a slow trip.

Up top, a  short stair climb 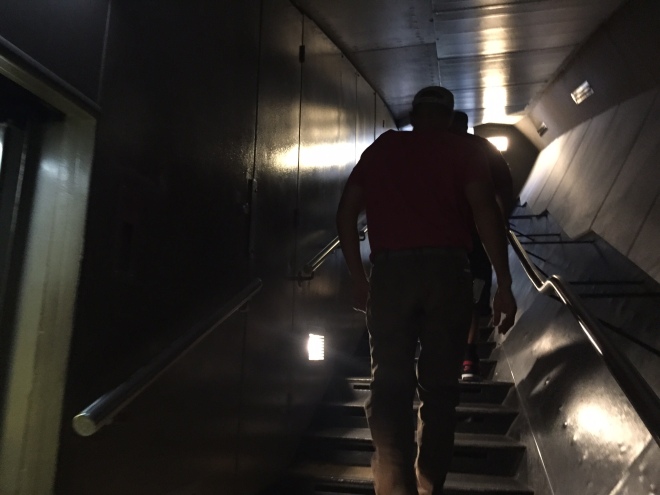 followed by the main event, the arched observation deck, flanked by a geometric display of 16 rectangular windows (per side), made purposefully tiny, enabling them to withstand the pressure of the structure itself. When the wind really gets going, so too does the arch, and I swear, I SWEAR I felt that, but really, I just had height induced vertigo. It takes a serious gale to spring that beast into action; a full 50 mph is required to produce a slight inch and a half of movement. I say “slight” because I am at the comfort of my own desk and not swaying around in a tiny hallway atop a mammoth archway, 192 meters off the ground.

If you can handle the crampy trip to the top, the payoff is well worth the temporary discomfort. On a clear day, the view spans 30 miles in each direction;  to the West, downtown St. Louis and beautiful Busch stadium 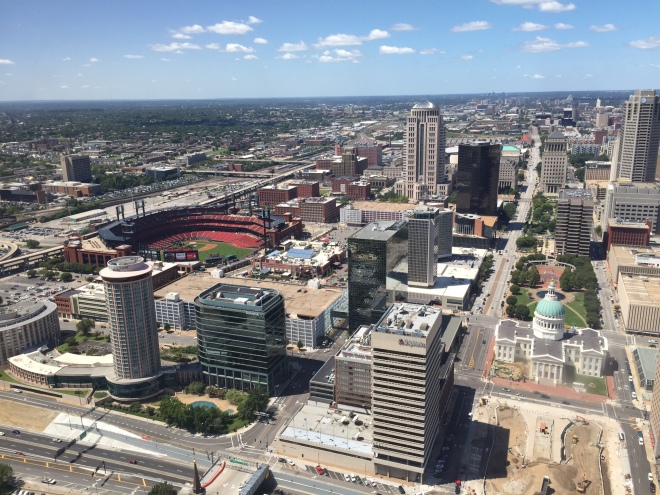 To the East, the Mighty Mississip 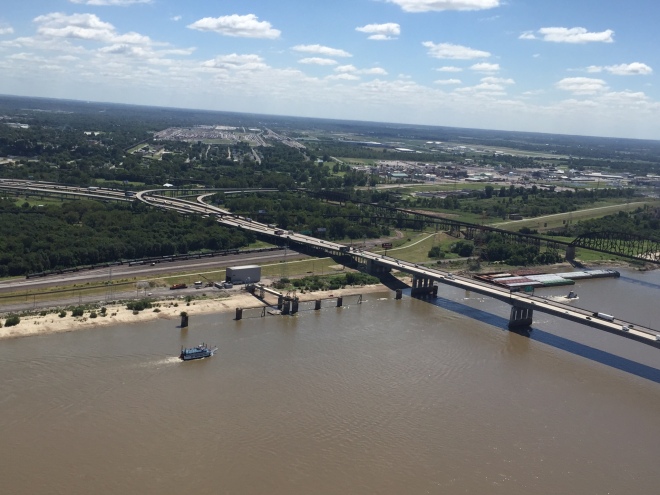 Your time up there is blessedly self directed; there is a docent of sorts who delivers an impressive list of arch stats, but his delivery is quick, painless, and informative, followed with a flier listing the same in case you didn’t feel like listening at the time or simply wanted to review at a later date. When we had our fill, we simply walked back over to the tram stairs and waited for our chariot to arrive.

We took our last meal in STL at Peacemaker Lobster & Crab, in Benton Square http://peacemakerstl.com/ 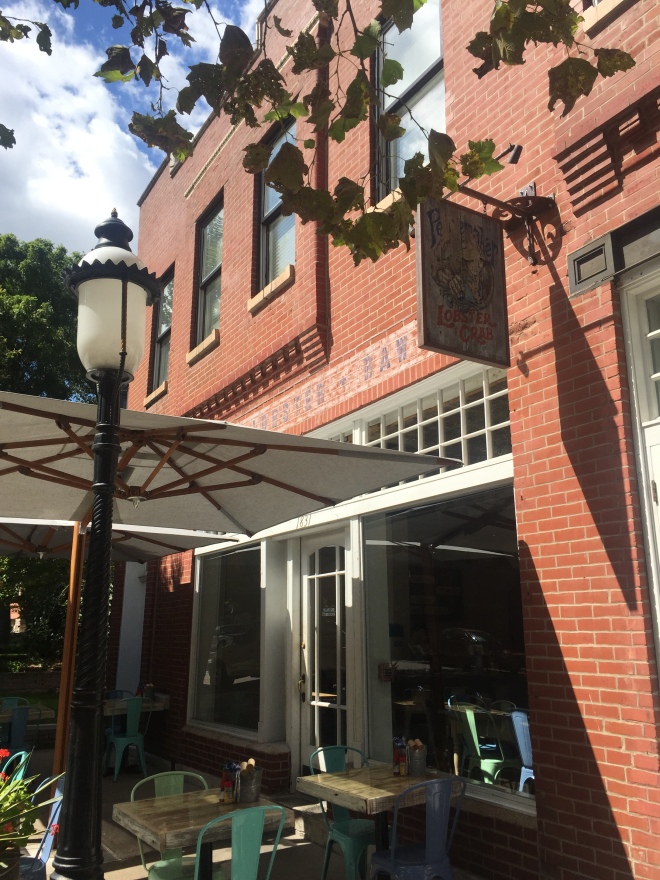 Simple and vaguely nautical inside; with nods to San Diego, Ft. Lauderdale, and Richard Avedon; possibly the only scenario in which two fabulously cheesy, exceedingly drunk, beach towns and one of the world’s most renowned portrait artists will ever be associated with one another, aside from a rousing game of Cards Against Humanity

We quickly claimed our usual perch at the bar, where one of my favorite inventions of the modern cocktail era (slushie booze, not of the frozen margarita variety) churned negroni’s and a bourbon cocktail 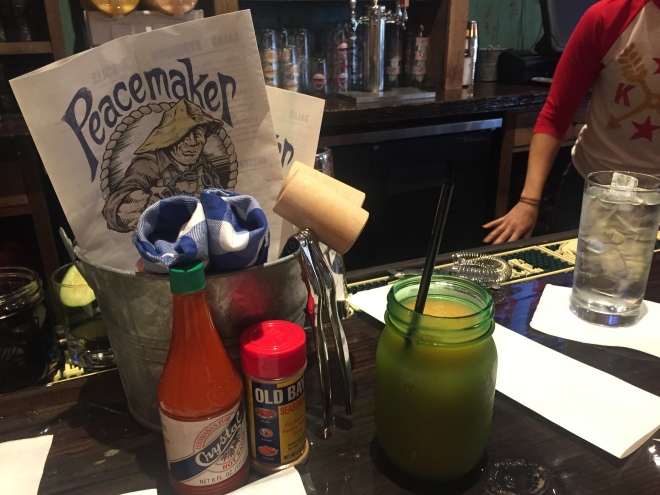 then dug into one bowl of perfectly fine Boston clam chowder

And one muddily flavored bowl of gumbo 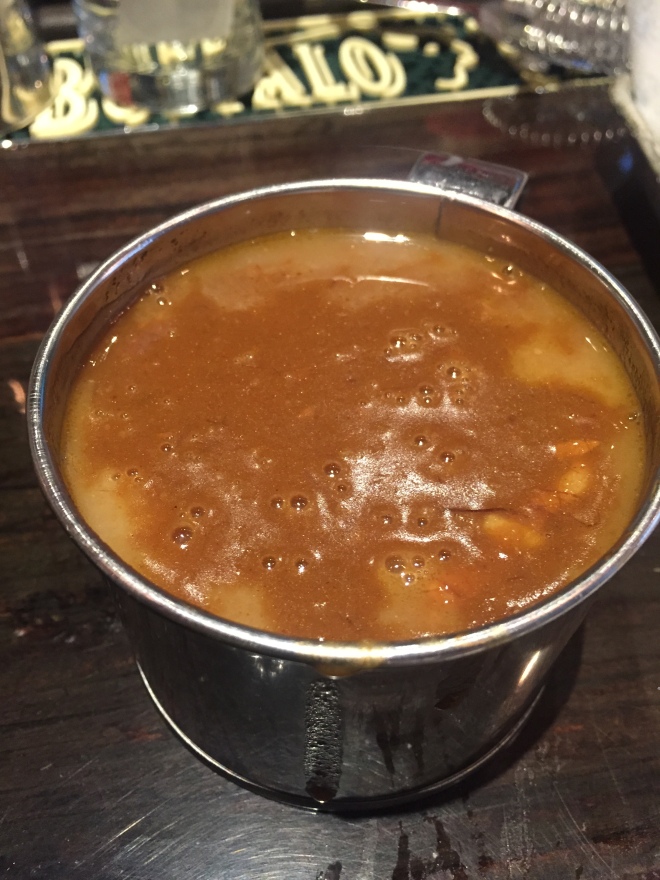 A half dozen oysters, served with both cocktail sauce and mignonette

As my friend and fellow food nerd Theo would say, JEZAPEET, look at that

Collards, a bit too bright and acidic for me; I prefer them dank and deep. I talk big, but I pretty much that entire heap of bacon flecked greens to my head

Hush Puppies…opposite end of the spectrum from collards, for me; a completely avoidable, almost entirely unneccesary food in my book. Give me a soft hunk of corn bread over these dense balls of the same, any day. 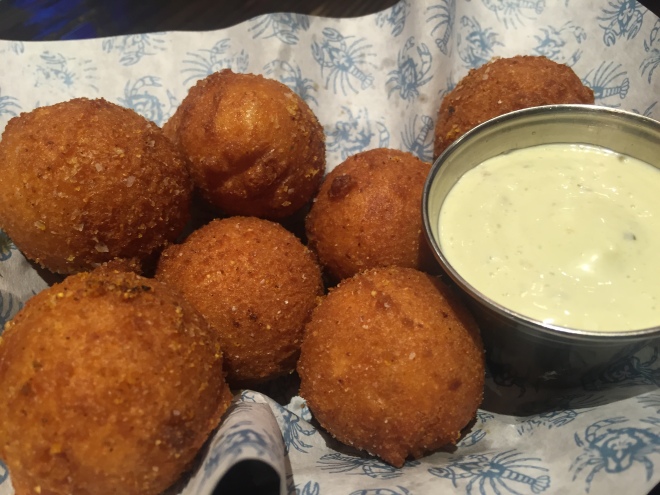 I don’t actually remember if this was an oyster po’boy or the fried catfish sandwich (catfish, I think), but at any rate, it wasn’t memorable and ranked well below the fried clam, with its superior bun and condiments 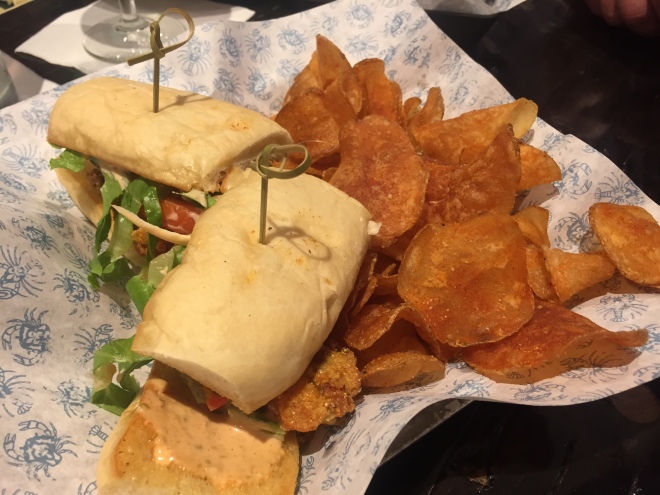 Then, a lobster frito pie, which sounded good on paper but did not translate in reality. The lobster only served to bring a fishy stank to the bag and didn’t harmonize, on any level, with the other ingredients

The four of us were in a mouth breathing state at that point, but, there was whoopie pie on the dessert menu, and this was our last St. Louis meal, and thank goodness we pressed on, because this carrot cake version of the New England classic was phenomenal

Super moist, full of spice, and oozing with what is arguably the best part of any carrot cake, the zippy sour cream frosting.

A good thing, that meal at tastemaker, as soon, our culinary experience would devolve into a game of “which tapas box is the least evil” 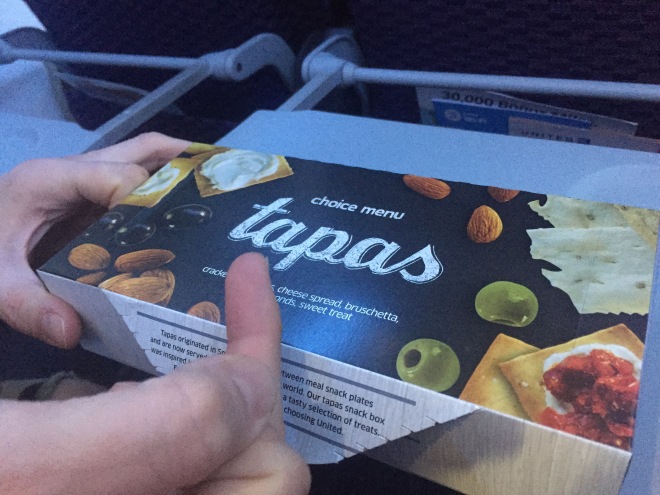 That middle finger’s for you, United.