The fair, clearly the biggest deal to hit Des Moines each year, hasn’t quite come to terms with local parking limitations, so, as one waits in the mile long string of vehicles vying for entry, one passes more than a few front lawns turned parking lot. Capitalism at its finest.

This day, our day, was none other than Super Sunday, which basically just meant that entry was half off but nothing else was a deal. The entire fairground spans an astounding 450 acres, within which are packed no less than 140 food stands, representing millions of unneeded calories for the ever expanding American waist. We arrived with a hearty appetite and an ambitious plan to consume as many of the ISF’s tasty treats before one of us succumbed to heart failure or severe gastric distress. Clear eyes, full hearts, can’t lose.

There were highs, there were lows, there was fatigue, biliousness, swallowed barf,  sunburns followed by windburns, calculated line maneuvers, and lots and lots of beer, but survive we did.

Bacon Wrapped Rib on a Stick:

Turned out, the totally unnecessary bacon wrap was actually, totally necessary, turning what would have been your everyday rib on a stick into meat candy on a stick; it was sweet. Sweet meat. Meat that’s sweet. Moving on.

Pork Chop on a Stick: 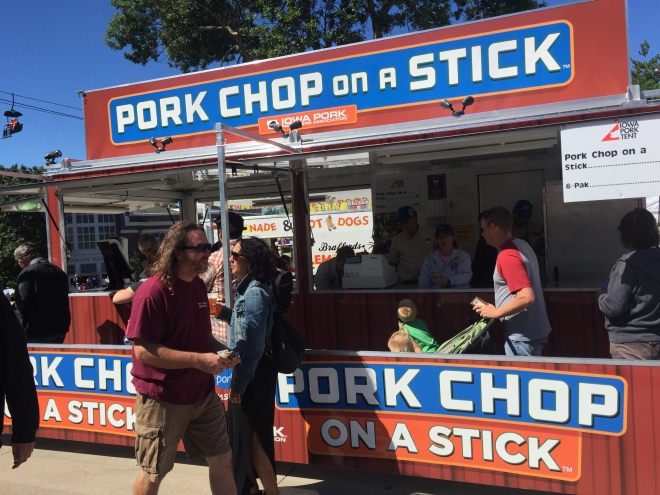 In one of my pre-state fair fantasies (and there were many), I had imagined the ISF’s famed pork chop on a stick as a  breaded and deep fried hunk of swine. In reality, it was a boneless, juicy, well seasoned, grilled chop, quivering atop a skewer.

It was, in fact, a corndog.

And now, for a short breather in the agriculture building (one of many exposition buildings on site) where the world’s most giant petrified salad bar was on display.

(most importantly, corn, and not of the canned baby variety) 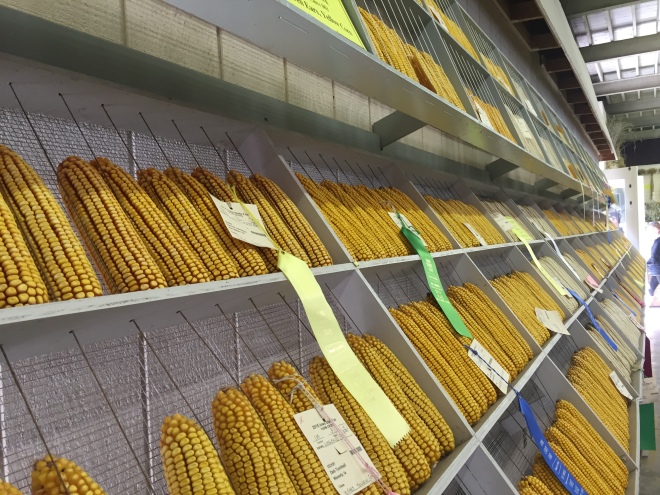 Also, the state fair’s most noted celebrity, the butter cow.

Next to the butter cow, a bunch of really intricate ice sculptures that sadly, zero shits were given for, because, the butter cow.

The agriculture building was not without its snacks.

Ghost pepper meat stick: While these were somewhat underappreciated at the time of consumption, about twenty four hours down the road they got the respect they deserved.

Salad on a stick: Nope. 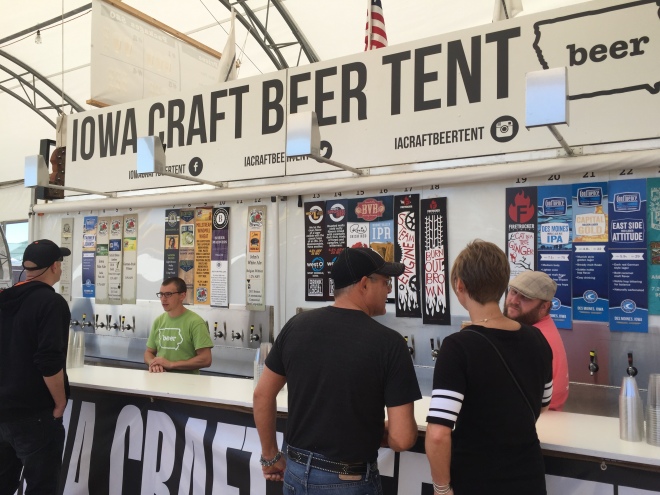 The Livestock Pavillion, aka Animal House. There was some pretty cool ish going on up in this giant barn, a goat show, for one (like a dog show, but goats. No joke)

And then, there was three year old Big Mac, lover of “ding dongs, Cap’n Crunch, and 30 packs of Busch light” Trump supporter and euchre enthusiast,  clocking in at a svelte 1,166 pounds, a breathtaking two hundred lb’s shy of the fair’s Big Boar record holder, Reggie. You’ll get ’em next time, Big Mac. 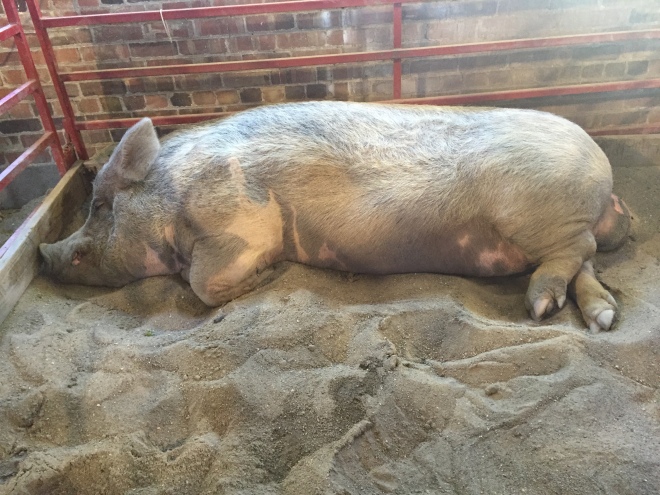 In the aisles, little prancing pig butts shuffled from one pen to another 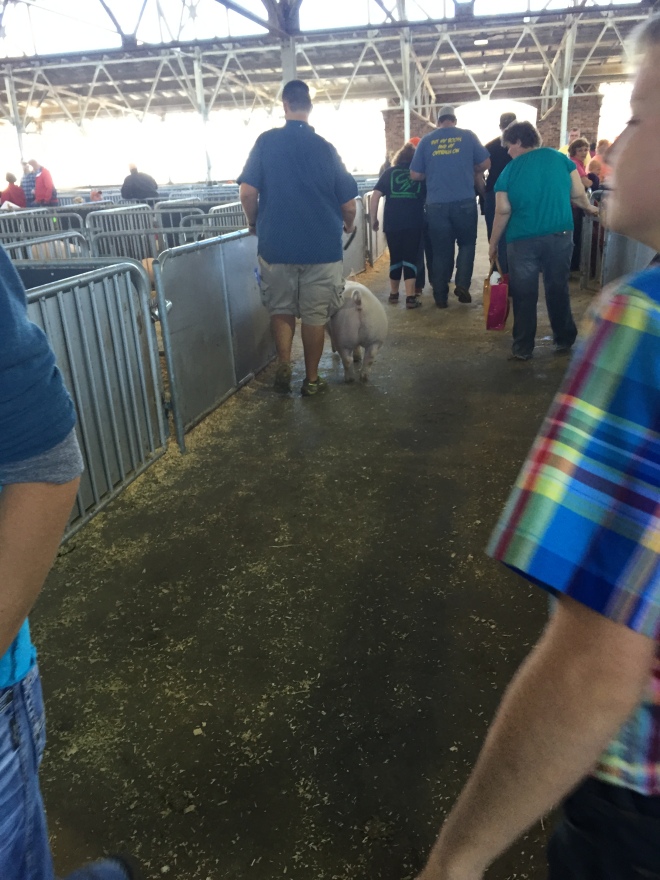 The name alone, a bit of a turnoff. I mean, religion celebrates the denial of worldly pleasures, right? Maybe, but the WDM United Methodist Church most definitely did not get the memo, as it was here that we scored a superb walking taco; simple in concept, high in execution; Nacho cheese doritos, topped with warm, spiced, taco meat, cold shredded cheese (key, the cheese temp) salsa, and a thick slug of full fat, cold, sour cream. Masterpiece.

Afterwards, an opportunity to thank the Lord for our good fortune 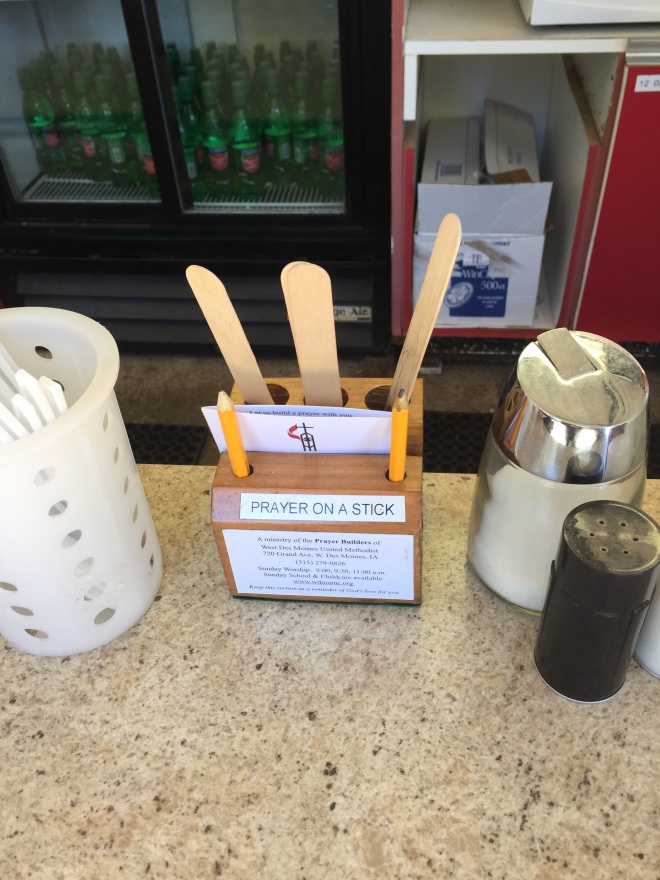 One of my favorite fried foods in the real world, but the ISF version was lackluster. I don’t know if the curds weren’t salty enough, or the batter was underseasoned, but, if you’ve never had them, I wouldn’t suggest cutting your teeth on these.

It’s Iowa. You don’t skip the corn stand. Tragically, where we should have selected roasted corn, we instead chose the easily shareable corn-in-a-cup, which was a loose interpretation of esquites (one of Mexicos most exalted street foods, a mix of loose corn, crema, and lime). Unfortunately, this version lacked acid or any kind of discernable seasoning. Sad face. 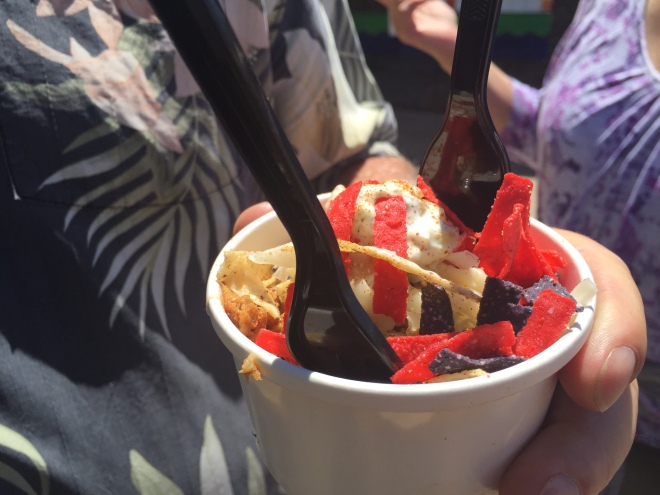 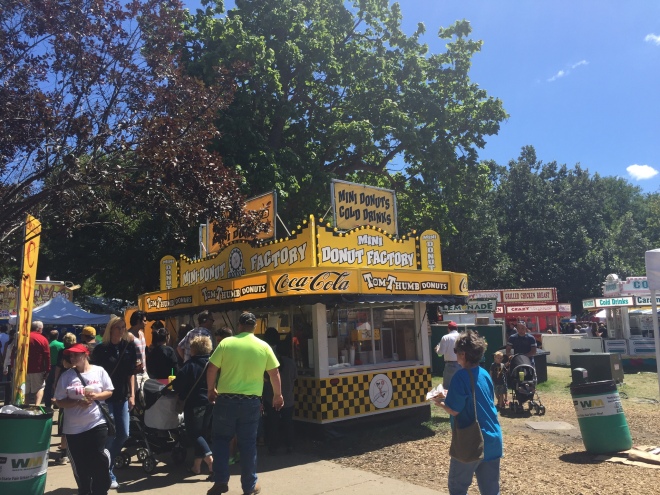 There isn’t much in this world that is more appealing than a waxy, old timey, bag

Indian Taco: Wilted iceberg lettuce, jalapenos, salsa, sour cream, cheese, and taco meat. The toppings couldn’t have been more banal, but, there is something to be said for the slightly sweet, funnel cake-esque fry bread base.

Also a highly appropriate venue for teaching the kiddies that evolution is a bunch of hooey, and dinosaur’s never existed.

Two different people movers (or sky gliders, in ISF lingo) span the East/West length of the fair grounds, you know, because rest is the natural answer to relentless consumption. The sky gliders do provide a nice view of the goings on below, and, this charming collection of slaughter chutes for sale. 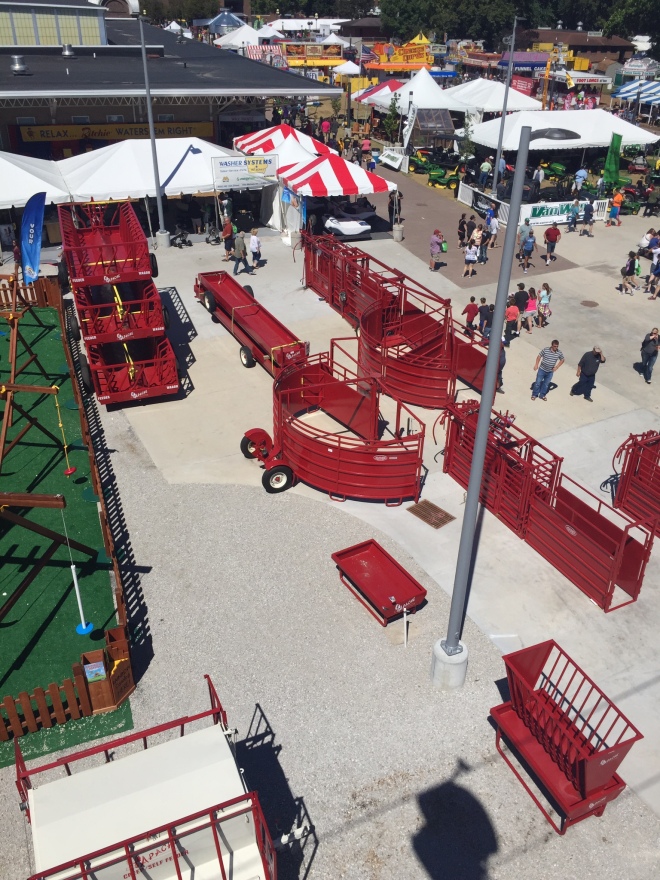 Probably not wise, a mid-day visit to the Midway, to give those tummy contents a good old fashioned shake up

The far East edge of the fair, Expo Hill, Pioneer Hall and the like, provides a bit of a break from the madness that goes on below, a decidedly more mellow piece of the fairgrounds, where civil war re-enacter types display their collections, horseshoe peeps fiercely compete 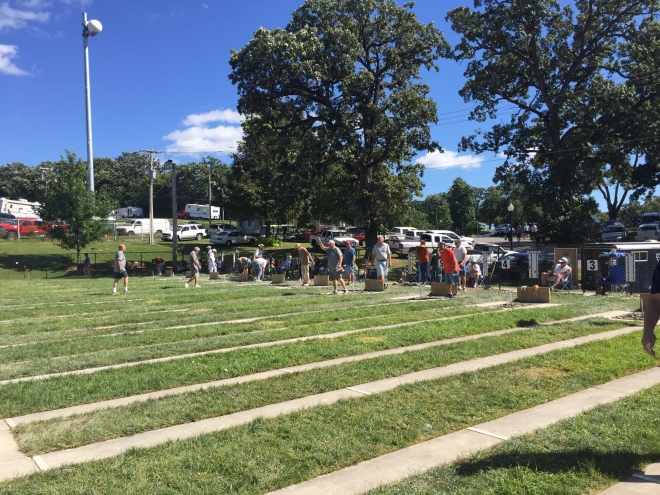 Up there, another opportunity to eat and drink; exceptionally awful, soggy pizza

However, a nice little (blurry) view of Des Moines, no?

That building there, between us and Des Moines? On one side, amateur photography; spectacular photos, entered into contest under a variety of headings; action, sport, landscape, animals, etc, both b&w and color, which were trumped by the goings on down the hall, where the dollhouse competition was in full swing.

A lover of all things miniature, the dollhouse spread gave me heart palpitations; from beach houses to country homes, those adorably intricate works of art had me transfixed. Also, the fair goer has a say in this one; as votes are collected in a large box  by the entrance to the room.

Back to business down in the heart of the fair.

Grater Taters: a soft and chewy spiral cut pile of fried potatoes with crisp edges; topped with your choice of sauce (cheese, for us. I believe ranch was also one of the options) having passed these all day and feeling no desire to try them, I was pleasantly surprised by the nuance in texture and the chemically velvet consistency of the cheese sauce. 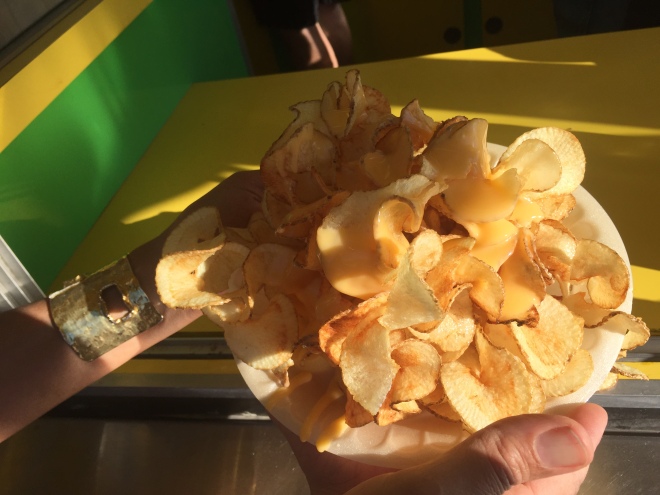 On a table outside the tent, a variety of DIY toppings were provided, seasoned salt, hot sauce, and the like, as well this little tease, a shaker full of bacon bits far too large for the holes through which they were meant to escape.

Fried chicken and peppers on a stick: This came from a “Chinese food” stand, which should have been the first indication that it would be awful, but we dove in anyway, because research. It was, by all accounts, awful.

Proof there is a God; a bowl of creamy, buttery, mashed potatoes, topped with gravy and braised beef, covered by room temperature, thickly grated, cheese (again, temp was key, melted cheese would have changed the whole dynamic) finished with one sweet little cherry tomato. After the first, we went back for another. 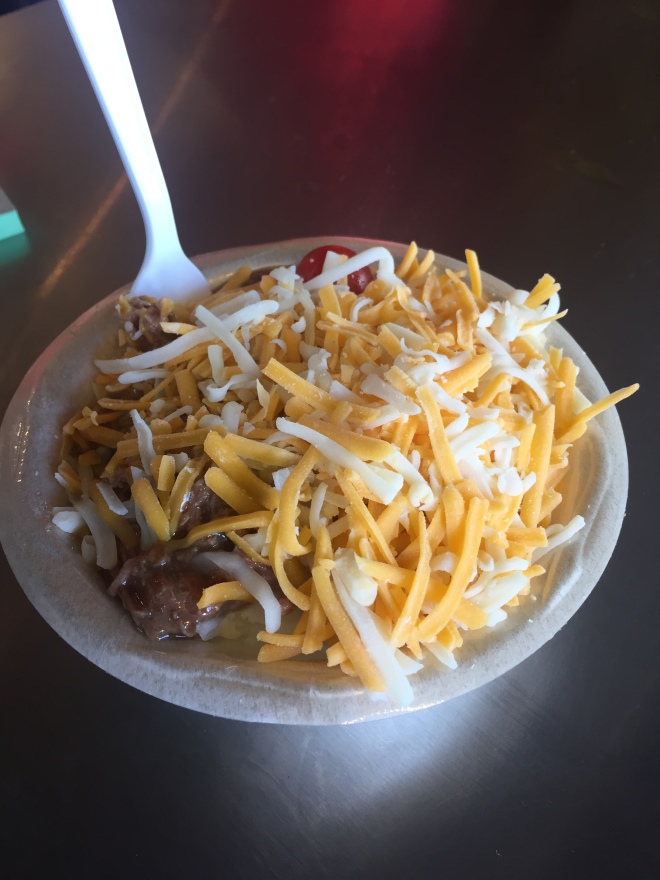 A logistical note, the hot beef sundae place is a sit down restaurant with a significant line that does not wane…go around the side to the take out window and bring your HBS to the bar aross the way, there was plenty of room in there, all day long. Just don’t be a jerk and buy a drink. 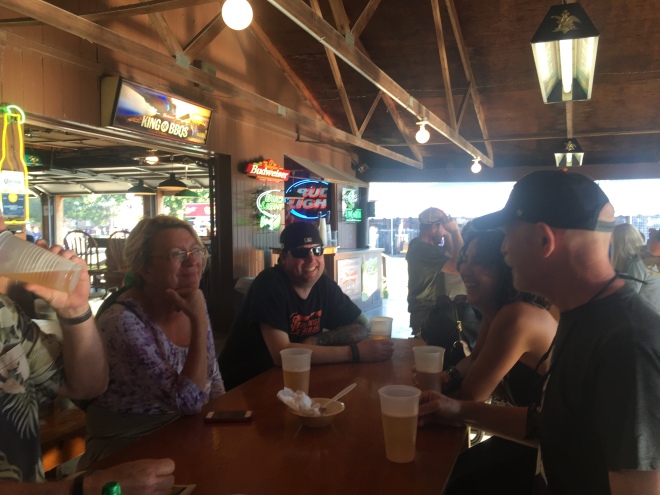 There was nothing particularly noteworthy about this dish. The meat was smoky as promised, the mac n cheese, a little mealy and tepid.

This giant hunk of nougat and nuts, caramel and chocolate was a Blue Ribbon winner with our gang. I think the picture pretty much says it all

Brisket bomb: there was a lot of scuttlebutt regarding the brisket bomb, it was new to the ISF  that year, and somehow, already lauded as the fair’s ultimate, must have, item. The stand was  consistently sold out throughout the day; which of course, only drove demand. Eventually we staked out a table, eyeballing those around us to make sure that when the announcement came, we would have the jump on them. About ten minutes prior to go time people got paranoid and started lining up; being good little sheep, so did we 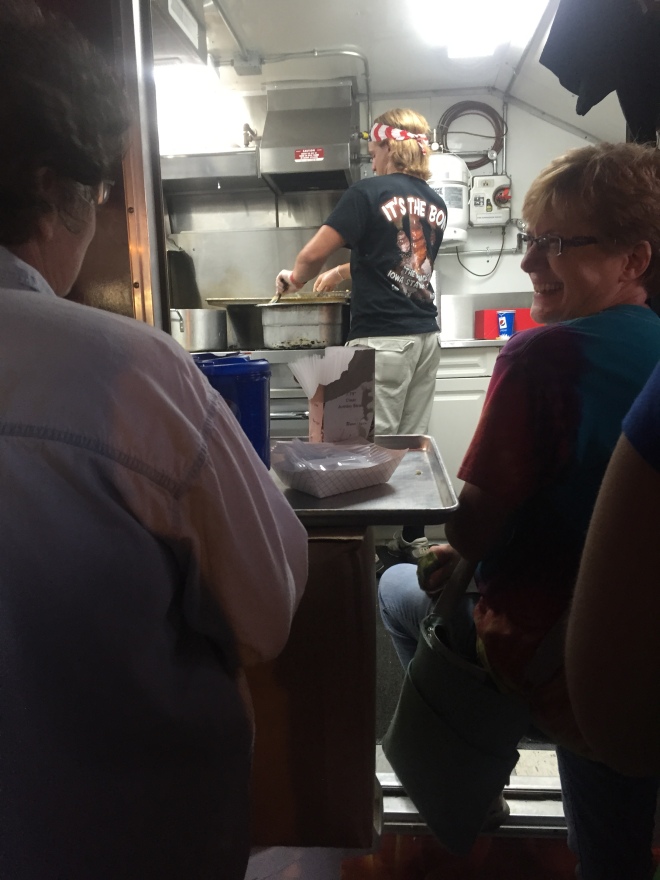 That woman is half in the trailer, mind you. Like, she put a bit of body in there so that no one could usurp her first place spot, and the five or so people in front of us all ordered so many bombs, an order limit had to be set. This was some calculated shiz. In the end, we scored our very own, Iowa State Fair, brisket bomb, and of course, it rated somewhere near “meh” on the deliciousness scale. In the end , the storied BB was just a sweet hunk of meatloaf, wrapped in bacon and lacquered in cloyingly sweet BBQ sauce.

And then, properly gorged, in some sort of food induced hallucinogenic state, we headed to the midway, so the men could belch atop fake bulls 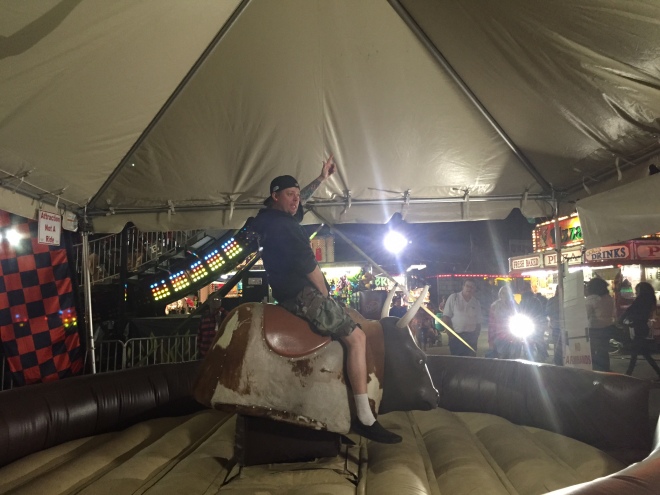 and we could take one turn on the ferris wheel, a giddy, neon spin, soundtracked by non other than Dee Snider, rocking a live performance over in the Pavillion (separate ticket purchase required for the concert) 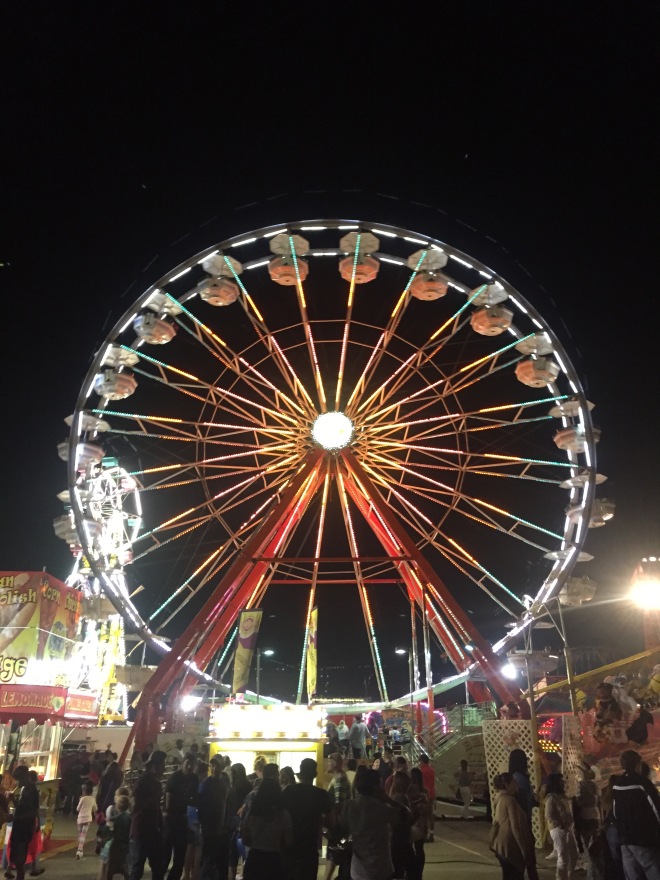 Sleep did not come easily that night, as my body struggled to understand what I had done to it and why. Much like Templeton, the cartoon rat from the children’s movie Charlotte’s Web, I half slept, sweating and tossing; visions of food dancing through my mind, spew, threatening to flow from my lips.