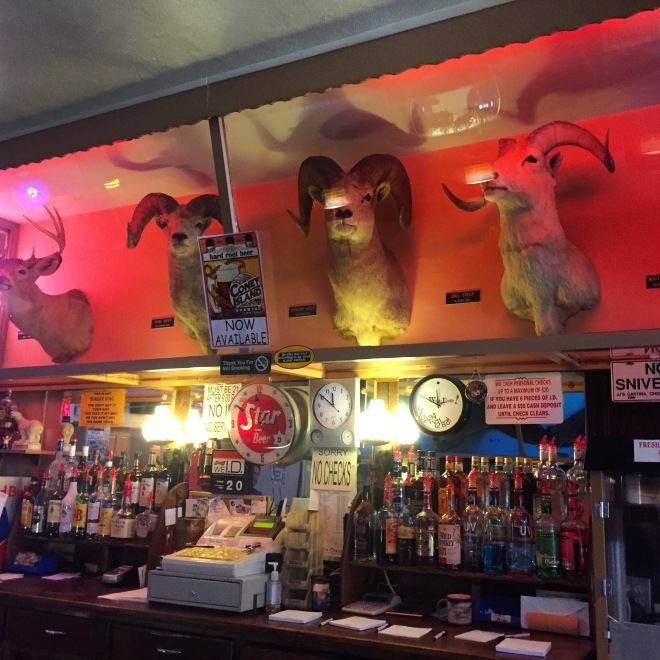 The Midwest, USA by postandjonesJanuary 14, 2016

It was morning in Dubuque, and I sat, bleary eyed and full of rotten burger, in the absurd atrium of whatever motel we slept in 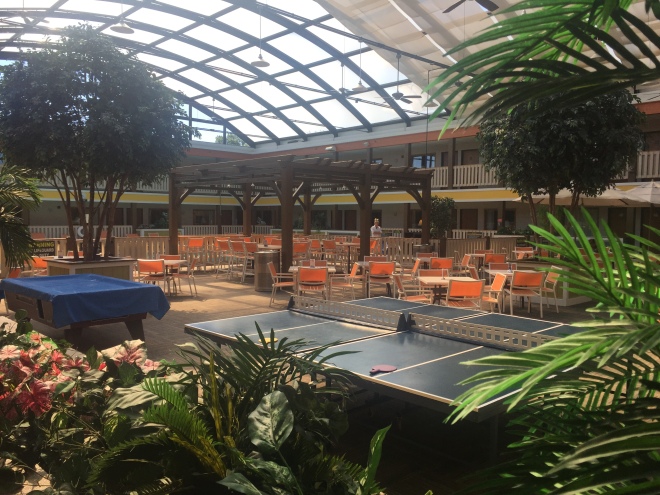 Downtown, we were treated to our first daytime view of the city, heavy with brick and greenery, perched along the banks of the lovely Missisip. 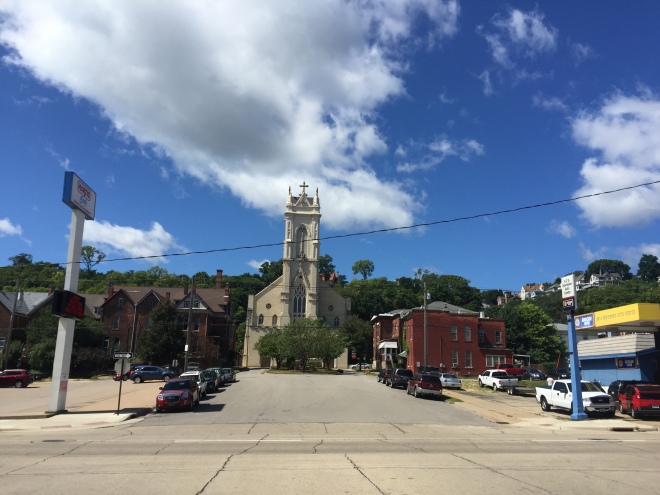 A little bit of research revealed that any true lover of dive bars would be remiss to leave Dubuque without a visit to Paul’s Tavern, http://www.yelp.com/biz/pauls-tavern-dubuque located just off the main square by the Town Clock (erected, 1873; moved to current location 1971). 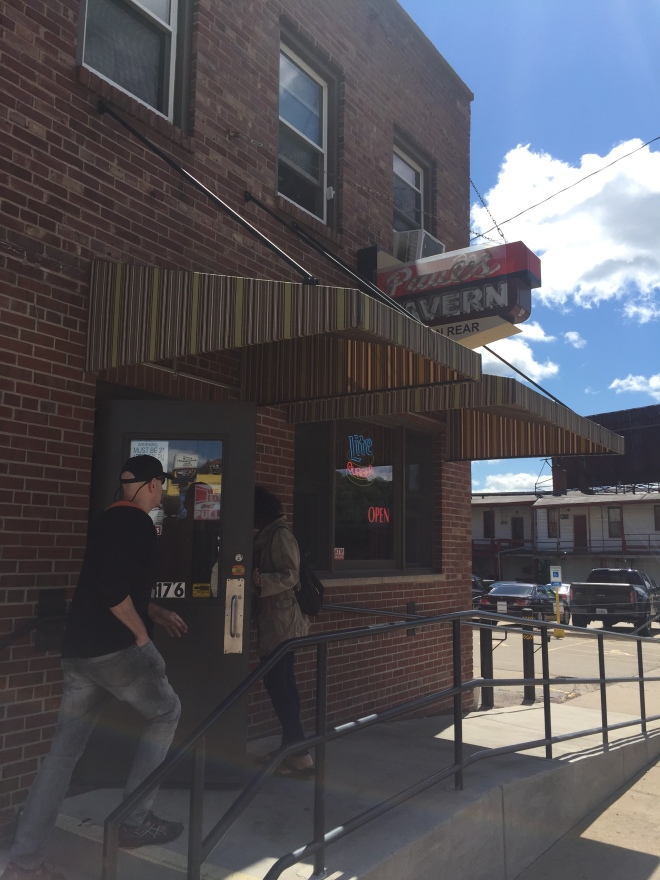 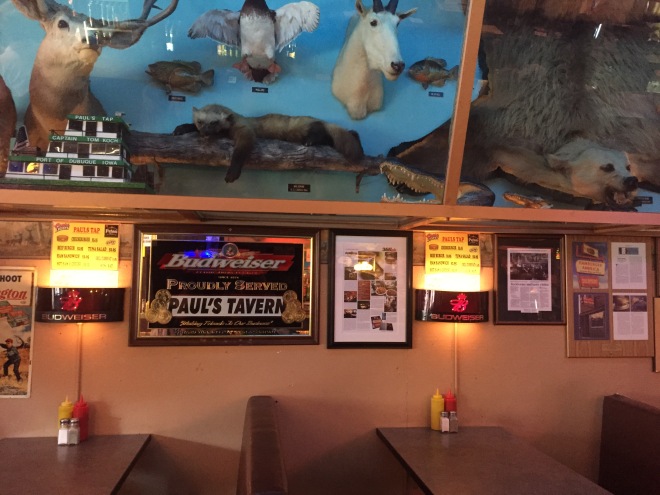 Much like the Dogpound Lounge of the previous night, Paul’s back bar is equipped with an adorable grill and broiler 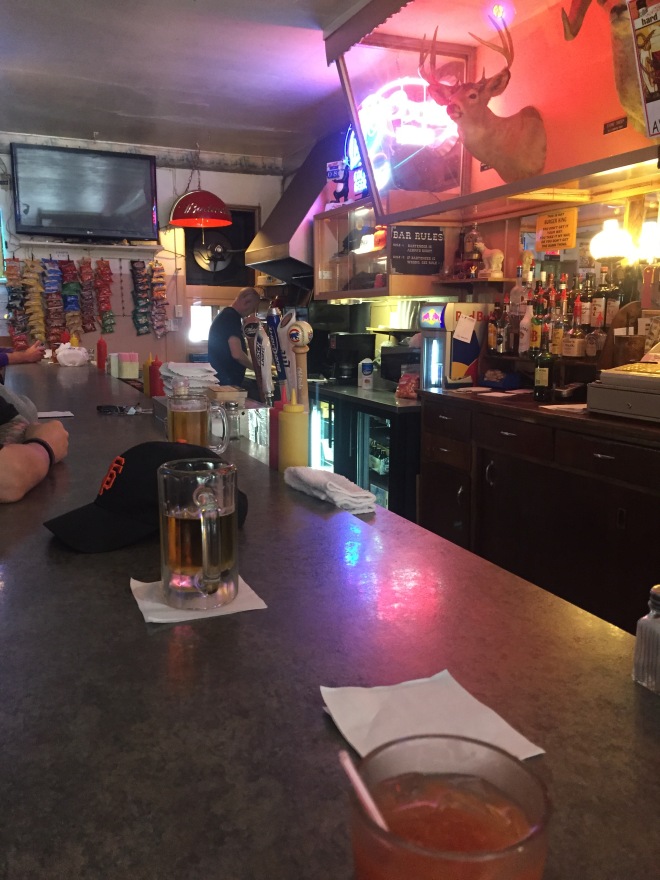 where their famed cheeseburger is cooked up, at 3.15 per. 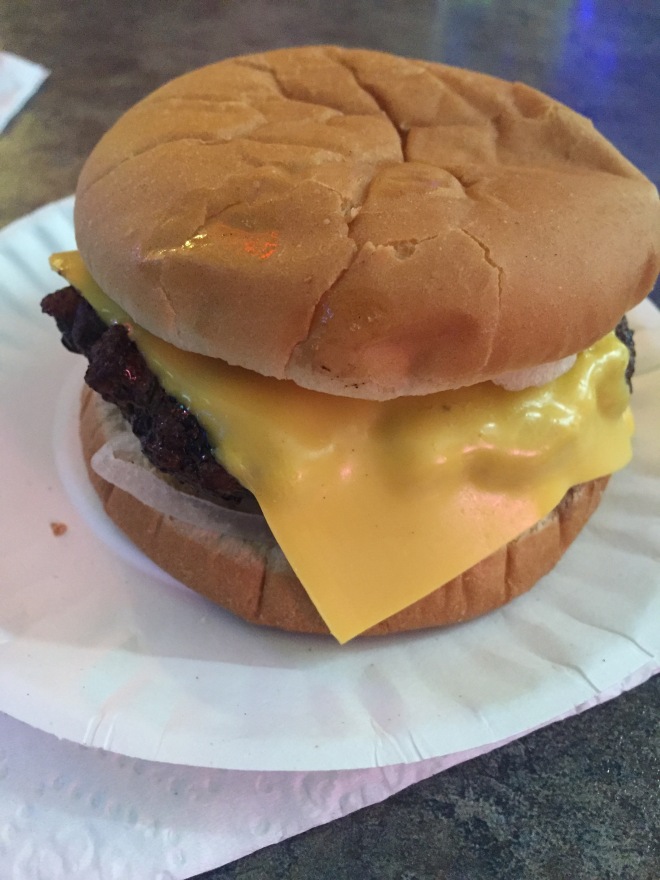 Oh, did I mention the gruff bartender that served it to us? atmospheric spice, him.

The burger was so delicious, in fact, that we could not leave Paul’s without also sampling the ham sandwich 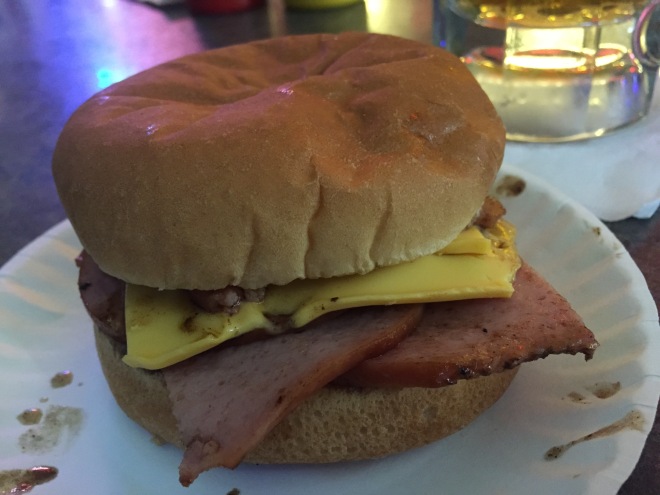 Some nicely browned pieces of ham steak, lightly griddled onions, the same sweet bun, the same slightly warmed American cheese. I would have set up a cot and spent the night eating sandwiches and burgers in Paul’s, could I have, and no return trip to my husband’s home town of Waterloo will come without repeat visits.

An hour or so later, we made our arrival in the small town of Evansdale Iowa, fried fish sandwich mecca and home of my in-laws. They know that we can only stand about a half hour of waiting before a trip to the Cedar Valley Fish Market must be made http://www.yelp.com/biz/cedar-valley-fish-market-waterloo 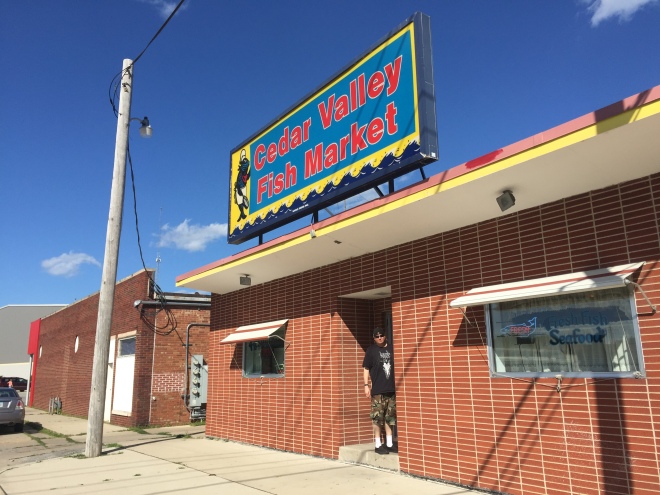 for a hearty dose of their fabulous fried perch sandwich. Other options, do, of course, exist: 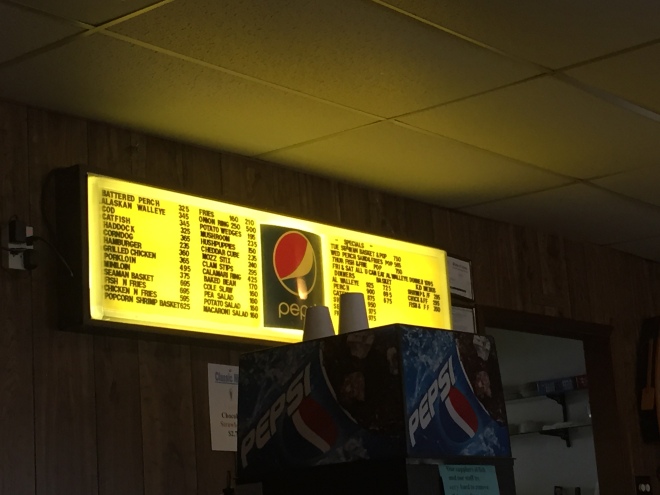 On this day, with all four members of our eating crew present, we went big, with an order of six fish sando’s and four sides

Fried perch on a sweet role with a critically hearty dose of mayo, up close and personal

With it, more mayonnaise; in fact, all things mayonnaise, from pickled peas, to potato salad, to coleslaw, and then, a bowl of meaty baked beans, for moderations sake.

Afterwards, a digestion trip to the bar next door, Babe’s, with its slightly terrifying in an “American History X” kind of way, facade 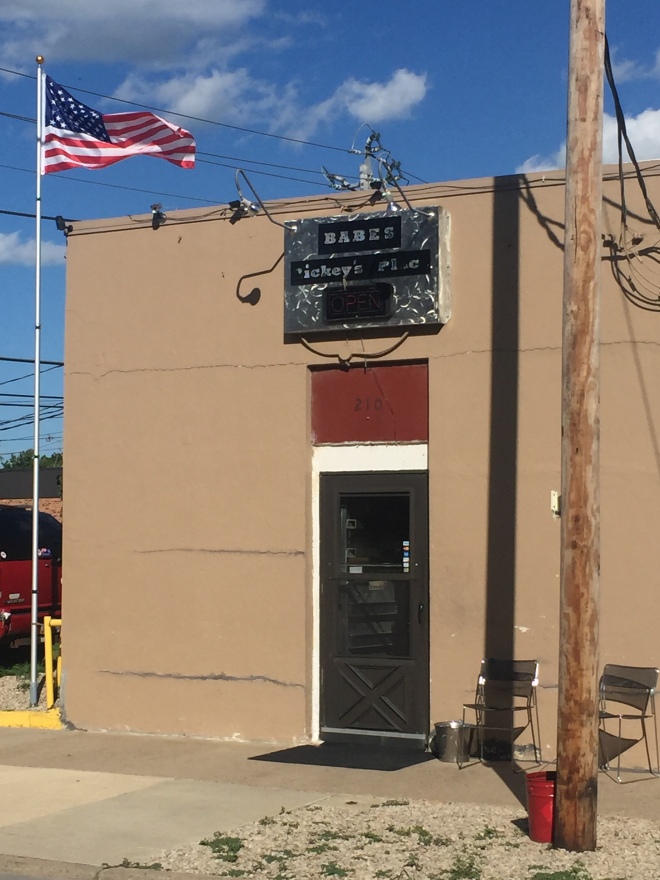 The topic du jour at Babe’s was the best age at which to start drawing social security, the amount each patron was drawing per month, and, once our hometown was revealed, what a perplexing place Chinatown is, with what must be rotten duck hanging in the windows.

That night, a visit to the Parkade, otherwise known as Cedar Fall’s happening downtown, a five block long strip of bars, shops and restaurants. First up, the Pump Haus, http://thepumphaus.com/, a place that offers every variety of sweet vodka drink imaginable, but has not one bartender or server who has heard of vodka up, which led to Randi and I being served room temperature vodka in martini glasses. 😦 Moving on.

a large sports bar/brewery type place ( I would guess they bill themselves as a gastro pub) where some of the tables are outfitted with beer taps (no idea how that all works).

For the first time in days, vegetables were an option; turns out the kale salad phenomenon has finally made its way all the way to small town Iowa

Randi and I ordered the BLT salad with the best of intentions, but in the end, it just meant that we ate a bowl of candied bacon and fried chick peas, dressed in ranch 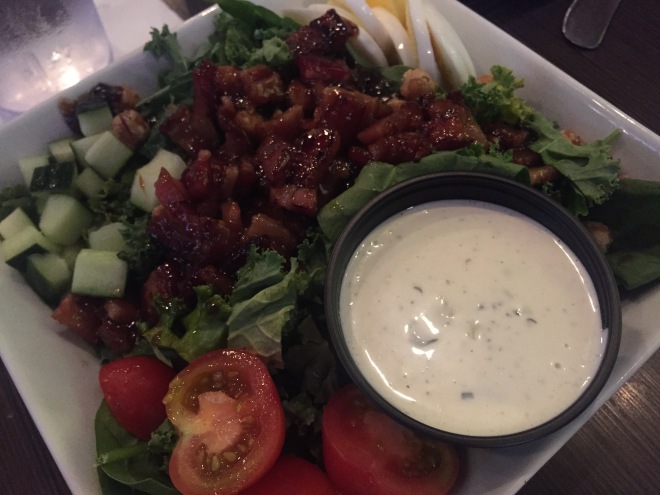 With a side of sugar crusted bread

and steamed asparagus, which tasted like manna from heaven

Post dinner, a visit to the Landmark, http://www.yelp.com/biz/landmark-cedar-falls-2, which offered a respectably tasty selection of craft beer 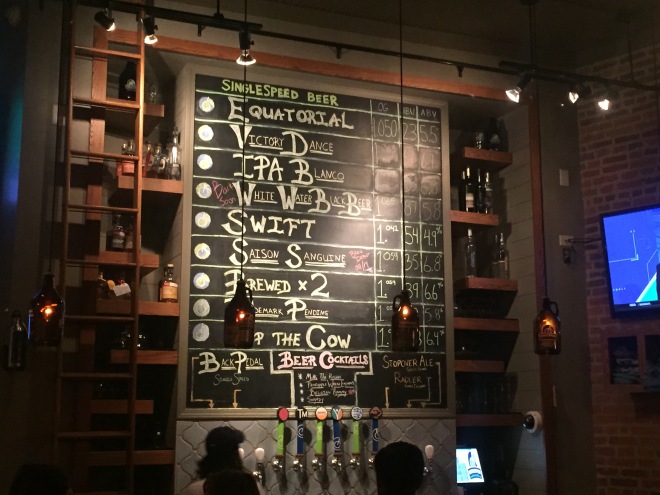 The Parkade has all of the hallmarks of a small town trying to be a big town, predictable menus and sweet cocktails among them, but at least they are trying, and, thumbs up to veggies and craft beer.

Late night, across town, this: