Saturday night’s festivities kicked off with a ferry ride over to Oakland http://sanfranciscobayferry.com/ 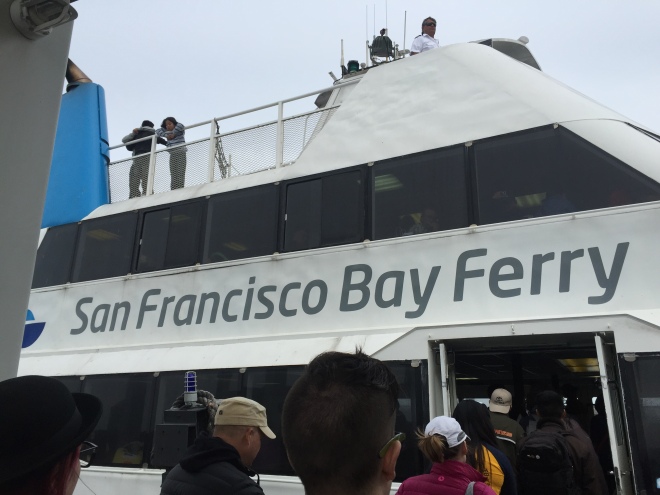 A snazzy way to cross the bay; the ticket was a reasonable $6.25/per (about double Bart, but one must pay a premium to avoid encounters such as these: https://www.youtube.com/watch?v=B-5K2hLJV64). Onboard, snacks, booze, soda, and seats aplenty. The total trip was a painless 35 minutes, then voila, we were deposited at Jack London Square, right behind some monstrosity of a hybrid bocce/bowling/drinking/eating establishment (way the rage right now; literally, everywhere).

A right turn took us to Heinolds First and Last Chance, an old whaling ship turned bunkhouse turned drinking institution, dating back to 1880. 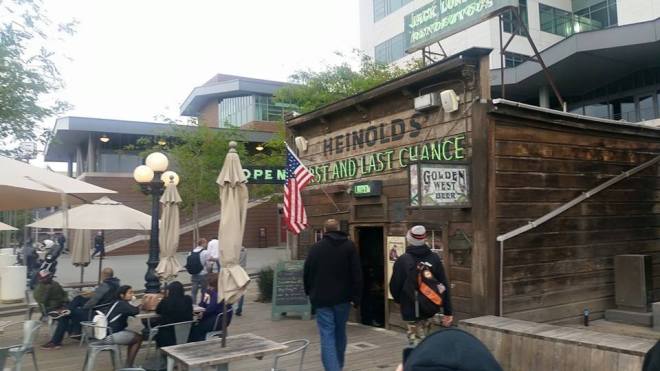 The “last chance” reference is twofold; firstly, Alameda used to be boozeless, establishing Heinold’s as the first stop out and the last one in on the ferry route where a buzz could be caught. Later, the same applied for Navy boys as they shipped out to war or came sailing home. Go on and read the history tab on their website http://heinolds.com/hew/history.html where a pretty spectacular list of former patrons resides. One must step down a foot or so to enter the sunken pub, to stand unsteadily upon the slanted floor or perilously place a beer on the subsequently tilted bar, courtesy of the earth’s undulation, circa 1906.

The entire space must be 600 square feet of pure turn of the century soot, wood and gas lamps (still in use. Really!)

The “bar menu” at Heinhold’s consists of bags of chips on clips. For us, a chicharrone with hot sauce packet and straight up bag o’ Tim’s. 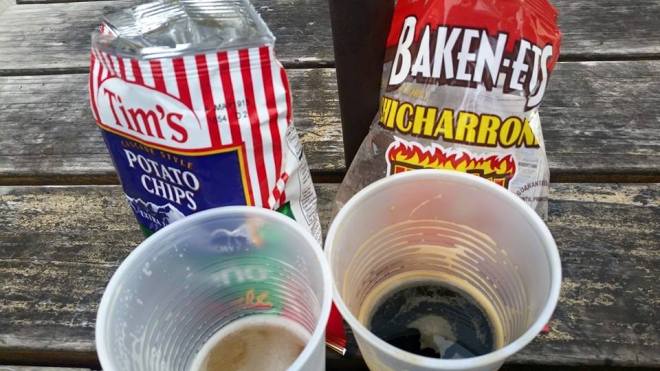 We quickly hustled down the pier to the car then, briefly touching on some of the sculptures and sights; as the grey sky in the photos suggests, the weather was not exactly hospitable that day. 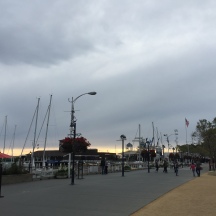 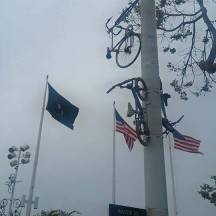 My newly minted father in law Dave is our go-to pro on all things Oakland, having resided there for the past thirty three years; his second bar choice for the night was equally unique and completely opposite in vibe to Heinold’s, The Fat Lady.

Where Heinold’s feels like a stripped down saloon from the wild west, the Fat Lady oozes plush Victorian warmth; low lit, dark wood, stained glass. I’d wager the charm dial is cranked up to eleven during the holiday season. 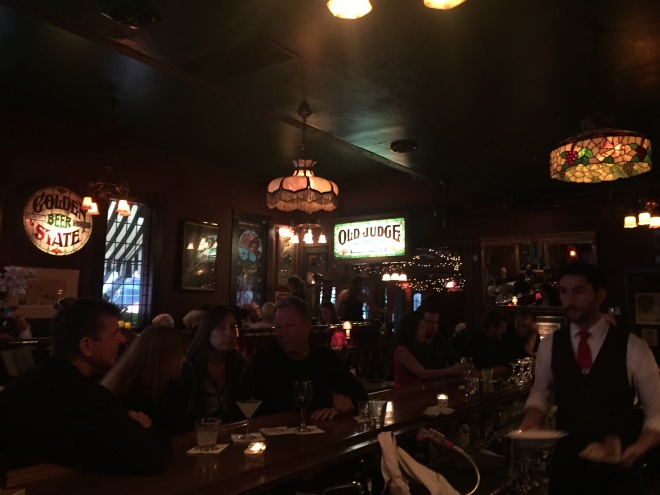 Jae-Min had a French 75, perched atop an adorable cartoony rendition of, well, a Fat Lady

The dinner plan was The Dock at Linden st, which sits out in what feels like the cuts, but may not at all be the cuts. I am lost in Oakland, no matter where. The Dock is helmed by James Shyabout of Hawker Fare fame, who, IMHO is a total magic maker; it made quite a splash upon opening (see what i did there?) and was, for all intents and purposes, the impetus for our journey to the east that night. http://www.thedockoakland.com/home/ 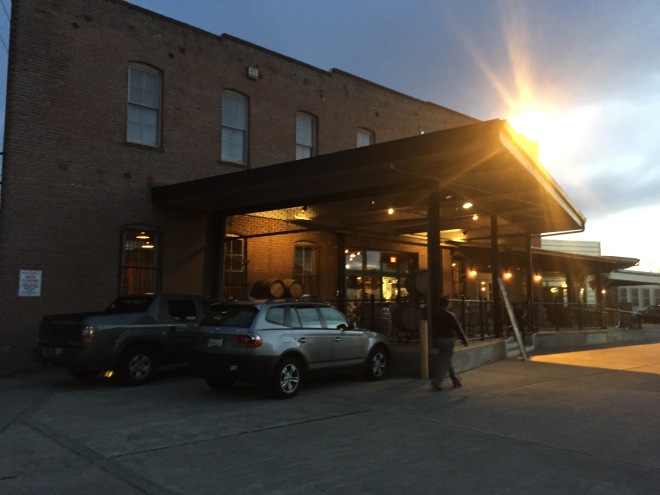 We started at the Beer Shed at the Dock; as the name suggests, a totally separate space dedicated purely to the consumption of beer, wine, and sports. They take their suds seriously at the Dock and the Shed; the restaurant menu was designed with beer pairing in mind.

As I mentioned before, Satan himself had paid a visit, robbing me of my ability to taste with a vicious cold cum sinus infection, so I can only report on the texture of the dishes we had at Linden st. Not being able to experience the flavor of what I was eating was just about the most joyless experience I think I have ever had; is that what it’s like for people who don’t care about food? It’s just a means to shut up the rumblings of the stomach, like those weirdos who are totally down with soylent? I just can’t.

We started with Caesar popcorn, which had the texture of popcorn. I bet it was delicious.

Asparagus with crisp sunchokes, cured duck egg yolk, fermented sunchoke, and tarragon. My table mates found it to be delightful and freshly seasonal. It is awfully pretty as well, with that nice little purple flower. I’m really struggling here. 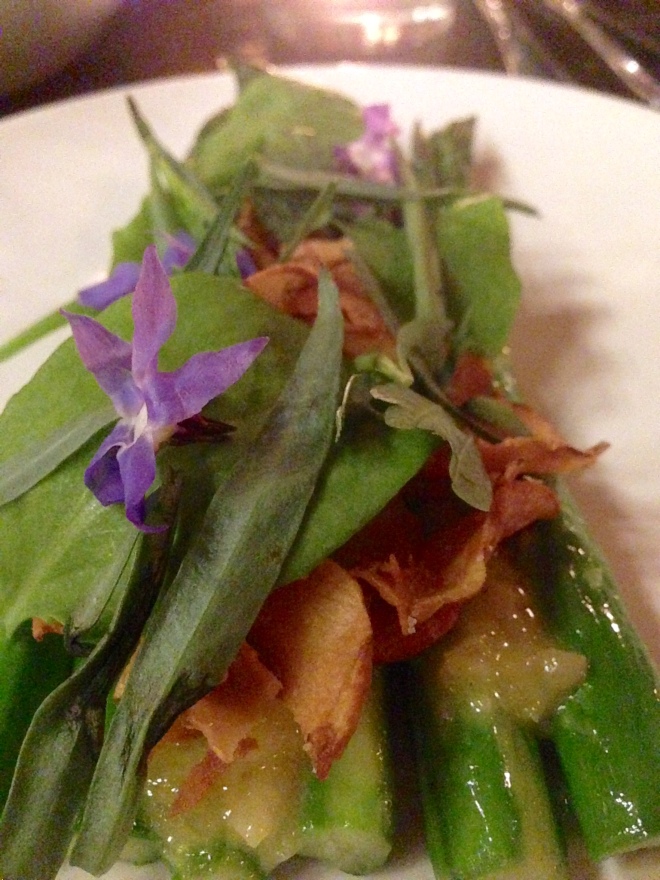 Spring garlic panisse, with smoked mussels, chermoula, yogurt, and fried chickpeas. No texture party in my mouth on this one.

Not at all upset that I couldn’t taste the beef tongue with broccolini, miso dressing and togarsashi. NOT AT ALL! Don’t look at me. I’m hideous. 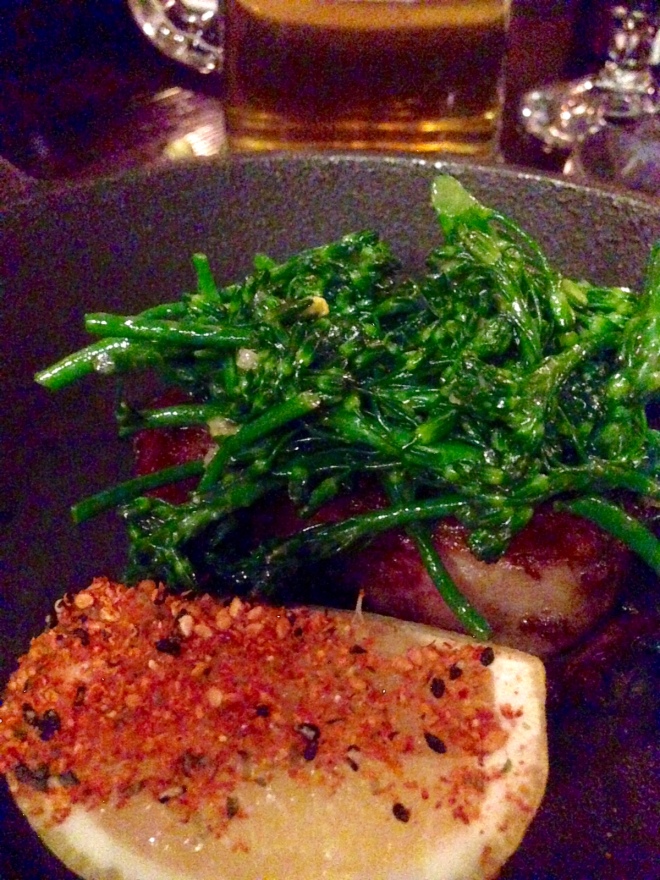 This was my favorite, one of the few dishes that could be enjoyed purely for the way it felt in my mouth, big juicy fish eggs for me to squish between my teeth, silky cream, crunchily seeded little bagel rounds, and potatoes with a little give on the outside, pillowy softness on the inside. I felt like I could translate the texture into taste on this one. I’m reaching, but it’s all I’ve got.

I don’t even know what dessert was. Perhaps it was the Strawberry Fling? A black pepper meringue, strawberry confit, olive oil, and lemon palm concoction? I really enjoyed watching my dinner companions moan with joy as they comsumed this dessert. Super fun. (texture of the meringue, fab). 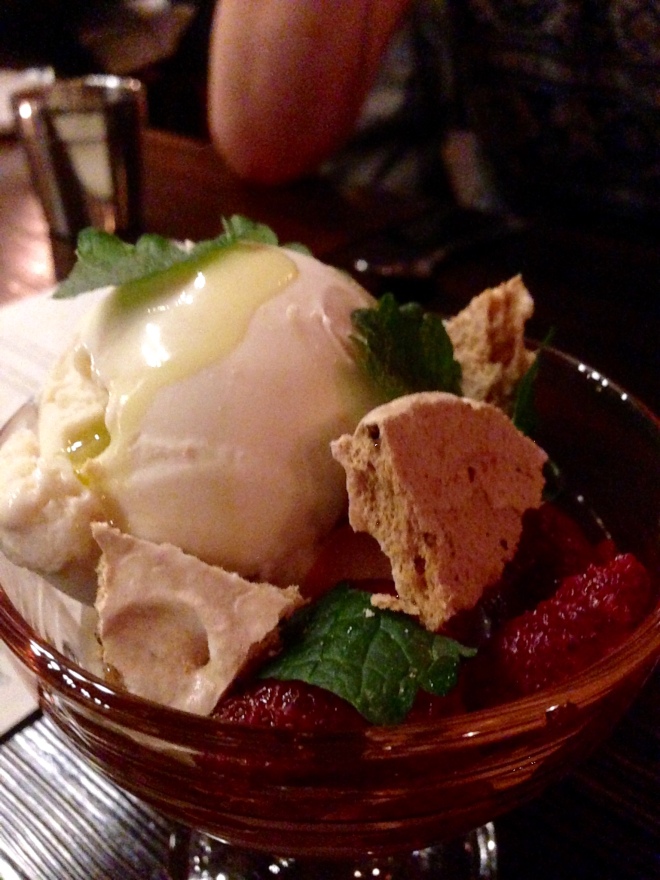 One day, I will take my revenge, tasting all of the beautiful food that the Dock has to offer. We were shuttled over to Bart then, in what turned out to be Jae-Min’s first ever ride in a convertible.

Back in SF, we ducked in to one of our neighborhood faves, The White Horse Saloon (White Horse Tavern, according to the website; not buying it) http://www.beresford.com/beresford/restaurant.htm where a couple of Nob Hill’s most fabulous drink slingers, Brian and Laurie, tend bar.

Walking in to the White Horse, the alluring aroma of free hot popcorn immediately greets the nostrils; on occasion there is even a free hot dog spread; when I can breath and taste, there is no keeping me from a bowl of salty popped kernels.

Apparently, when I can’t taste or breath, the same applies. The front room, the bar room, is small, cozy, and sort of Game of Thronesy, like Sansa Stark may make her entry at any moment; the back, a larger, more party prone space with shuffleboard. The White Horse just has a certain something that appeals to me.

I was hell-bent on showing Jae-Min a good karaoke time after that, dragging him to the Mint, on the edge of the Castro (according to yelp, Hayes Valley. humph), http://www.themint.net/ which was truly awful that night. Now that I think of it, it’s probably never great.

After a sufficient amount of caterwauling from the mouths of look-at-me-I’m crazy! twenty something girls and aggressive, “hilarious” renderings from rapey twenty something guys, we made a run for it, heading down Market Street to The Cafe, http://www.yelp.com/biz/the-café-san-francisco-4 a gay bar/dance club which I totally imagined was two blocks away but was acutally like a mile away, past what I like to call the “big gay safeway,” which Jae-Min, in a moment of pure genius, redubbed “the Gayfway” (soft Korean giggle, included).

Sorry for the bad picture, but at this point in the night photography skills were compromised. The Cafe is naturally, mostly men, but all are welcome and accommodated, their center stage featuring both scantily clad male and female gogo dancers. This was the second visit for both Jake and myself, the first ending traumatically after a round of “adios motherfucker’s,” a bright blue version of a Long Island iced tea, that on this night, ended up all over my shirt, courtesy of my husband. The music was a bit techno heavy, but there were blissful moments of pop sing along singularity between me and my bud JM, who would later describe the evening as “epic” and golly geez, that’s all a tour guide could hope to hear.

The Dock at Linden St