Jae-Min’s first morning in San Francisco was a Friday, a work day for both myself and Jake. Depressing, I know. As much as I wanted to rock my own staycation alongside him, I simply could not. Mikey took the wheel (literally) embarking upon part one of what would be a two part driving tour of the city.

They made their way over to check out the view from the Cliff House at Ocean Beach, a restaurant that in the early 1860’s was a darling of the city’s elite. http://www.cliffhouse.com/home/index.html At the time, Playland, a ten-acre amusement park, was still in existence, spanning the length of the oceanfront. The Cliff House was soon overrun by degenerate clientele, its fall from grace culminating in 1885 when a ship full of dynamite smacked into the rocks below, exploding on impact and tearing a hole into the famed restaurant (!!!) Present day, it’s just a cheesy place to take a date.

Ocean Beach is currently a barren strip of water in which no sane individual would ever swim, (people do, in fact, put their bodies in that glacial liquid; they clearly do not have their faculties about them) with an undertow that regularly makes the news as it pulls folks out to sea. The Pacific is so frigid this far north that when I trained for a marathon years ago, we iced our legs in that water after a particularly long haul. And it hurt. Like my bones were being hit with a hammer. 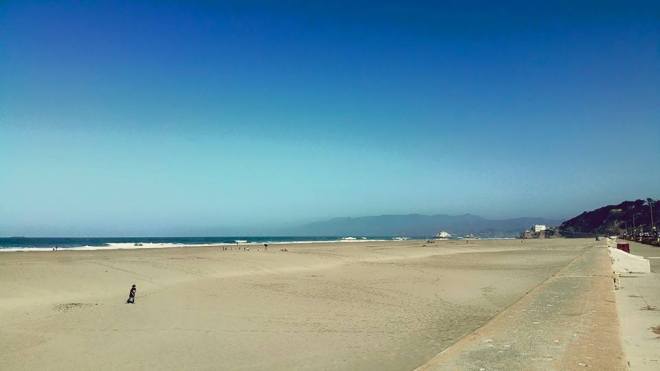 I don’t know from where this lovely photo of the bridge was taken (I poached these pictures from Jae-Min), but I like to imagine it was Baker Beach, one of San Francisco’s few nude beaches. The thought of Mikey and Jae-Min perched above a bunch of freezing full Monty’s, snapping shots of the scenery, just sort of gives me a case of adolescent chuckles.

A gazillion people drive, walk, run and bike across the GG bridge daily, some of whom have an actual death wish; the bridge is the second most popular suicide site in the world (top honors go to the Nanjing Yangtze River Bridge in Nanjing, China) Me, I get sick just looking up at those towers when I cross, not a chance in hell that would be my method of choice. 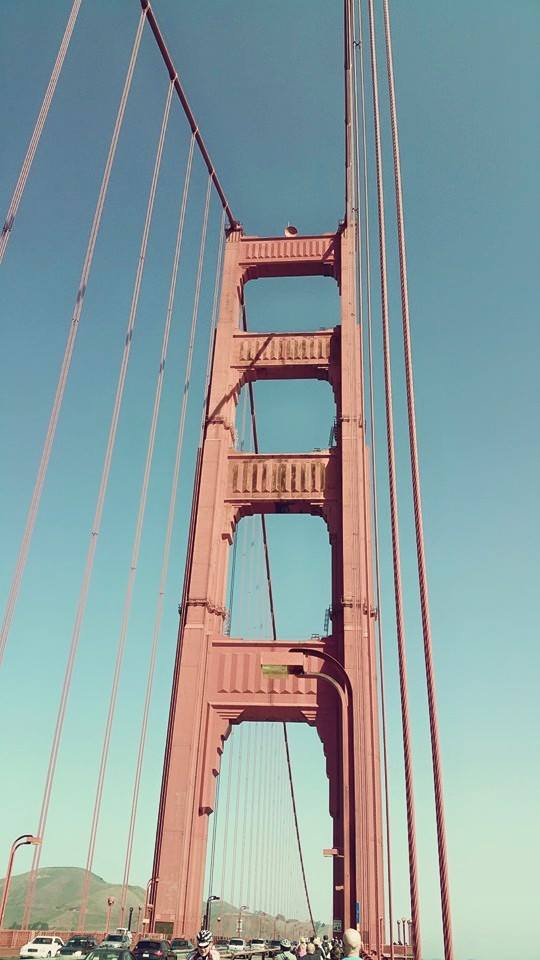 They visited the Painted Ladies at some point; sidenote: San Francisco possesses thousands of painted ladies, the term simply refers to a Victorian home painted in a certain style-“Italianate,” if you must know, but, really, nobody knows that.

However, this row of Vic’s on Steiner street is so famous that they alone have come to be known as THE Painted Ladies (capital P, capital L). Some people come not to see the beautiful row of houses, but rather to photograph the façade used in the opening credits for the show “Full House” which is…interesting (minimum age, 35, right?) The homes face Alamo Square Park, a lovely place to picnic/bring your dog/sunbathe/smoke pot while admiring the Ladies, for as long you fancy, as pretty much everyone in this photo is doing. 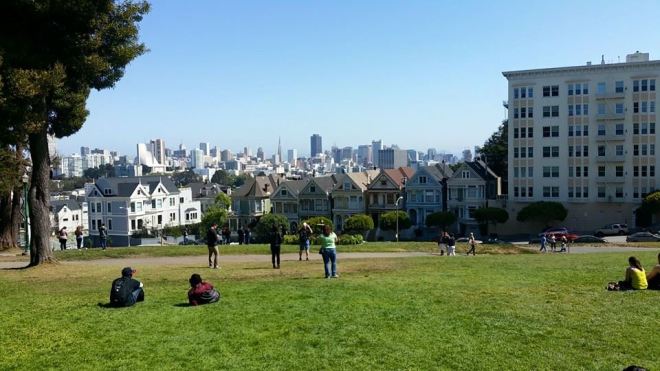 They wrapped the tour with lunch at La Taqueria, the winner of this fabulously absurd and oddly scientific national burrito bracket: http://fivethirtyeight.com/tag/burrito-bracket/

Seriously though, if you visit San Francisco and don’t hit up a taqueria, well, you haven’t visited San Francisco. http://www.yelp.com/biz/la-taqueria-san-francisco-2

The work day had come to an end; it was time to start our procession to AT&T park, the most heavenly place in all of San Francisco. The Oakland A’s would be crossing the bridge for an exhibition bout with the Giants, and, not wanting to spend a million bucks or bore the life out of a non-baseball fan with a full evening of sitting and watching two teams who mean not a thing to him, we bought standing room only tickets. It seemed like the perfect solution.

First, and there is always a first when it comes to baseball, we began pre-gaming at our apartment, in the Crown Towers building, otherwise known as 666 Post, a gothic bright red tower with an ornate, castle-esque lobby; an ode to the dark side if you will, with a truly breathtaking rooftop view. 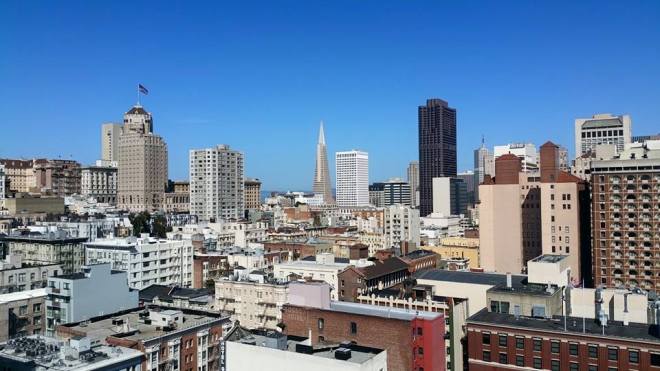 For my birthday last year, Jake commissioned local artist Chris Schearer to recreate that panorama (top photo is just a piece of the whole), in both sketch and watercolor, should we ever have to move:

Of course, the picture does it zero justice; Chris’s website has much better photos of his painstakingly intricate city-scapes and snippets of local scenery: http://www.chrisshearerdoesart.com/

Inching our way towards the waterfront, we made a stop at Mikkeller Bar, which is about four blocks from our apartment and not at all near the waterfront. Mikkeller is a craft brewery that moved into the tenderloin a year or so ago. http://mikkellerbar.com/

Mikkeller is a great spot for beer lovers (extra points for their “running club,” a group that goes running then pounds beer together) they host a solid 42 tap selection of draughts, as well as bottled brew and hearty fare; meat, salt, fat, and veggie, in large doses and small, all represented. Also, it’s really close to Bart, accessible, and roomy. In short, I dig it. 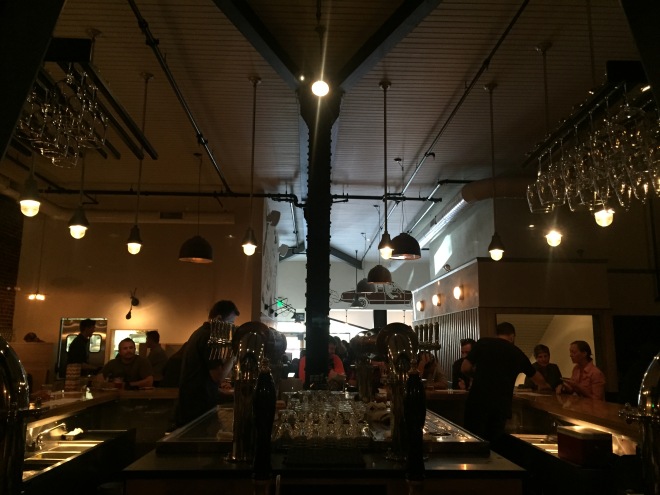 I got a little out of my head that day and ordered a raspberry cream beer for reasons that are still unclear to me. It tasted like raspberries. And cream. That, I did not dig. My second round, a brown ale, was much more pleasant and served as the perfect liquid fall to carry these scrumptious “little smokies” to their destination. There was nothing slight about those smokies; they were beefy chodes wrapped in a considerable portion of thick cut bacon.

The bulk of the journey was covered after that, a fifteen (ish) minute walk to the far edge of SoMa (South of Market), the neighborhood which borders China Basin. We didn’t quite make it past the Hotel Utah http://www.hotelutah.com/ 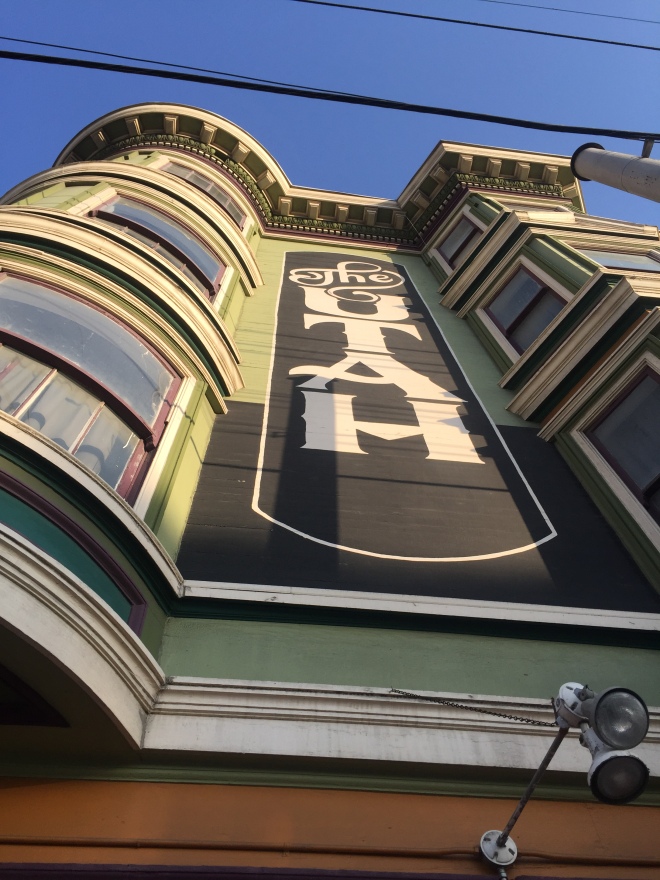 Yet another relic of the storied Barbary Coast; a bar which got its start in 1908, when Fredericksburg beer, a turn of the century favorite, was delivered to the watering hole via horse and carriage. The original bar-back remains intact; a gorgeous display of ornately carved, rich colored wood. Of course, no such establishment would be complete without an enormous mounted buck watching over things. The Utah is also an SF mainstay for local music, open mic nights, etc.

We almost made it in then, we really did. But, one does ignore a bacon wrapped hotdog vendor when they magically appear. 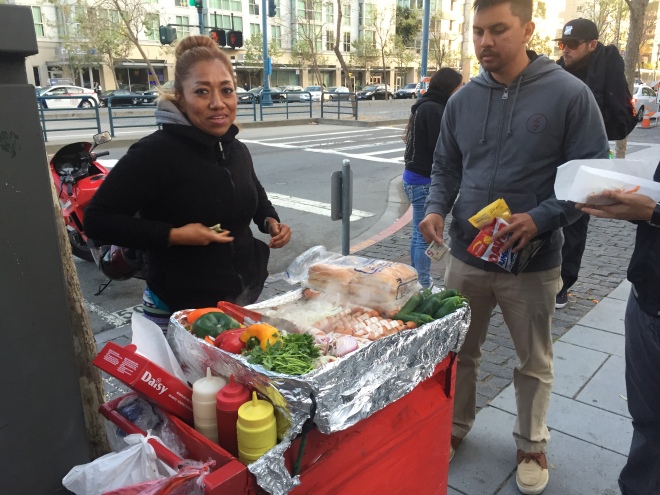 Not only is the smell of a bacon wrapped hotdog unbearably alluring, but also…a bacon wrapped hot dog. Our list of must-do’s included a visit to the mission with Jae-Min for just such a thing. A few years ago, they could only be found there, and only late night after the bars emptied out with patrons dying of the drunchies. These days, the mission is riddled with BWHD stands, drawing both lunchtime crowds as well as late night revelers, as is the ballpark area (gamedays only).

A cart has even made its way to Nob Hill, mere blocks from our home, but blissfully, it’s late night only, thus saving me from suffering an inevitable BWHD induced heart attack.

This dog was different than most, with an array of vegetables on top, whereas they are typically served topped with some grilled onions along with crema and mustard.

Inside AT&T, things were…hectic. First off, every game sells out at AT&T. Literally. Since the world series win in 2010, every single game sells out. This exhibition game was no different, and while I am accustomed to being there with 42,000 other folks, I typically have a seat to which I can retreat. Not so tonight, with the SRO tix. We knew this going in; in theory, one thing, in practice, quite another. We shuffled along with a constant crush of people, ever so slowly circling the park, taking in its various sites. The beer situation at AT&T is grim on the tastebuds and worse on the wallet ($10.50 for a 15 oz Bud Light, anybody?), though there are a couple of special spots where that $10.50 can be paid for something slightly more palatable. We hit the Bass stand then inched on, past the glove, the coke bottle, the kids mini-diamond, past the center field food court, downstairs, to the edible garden. 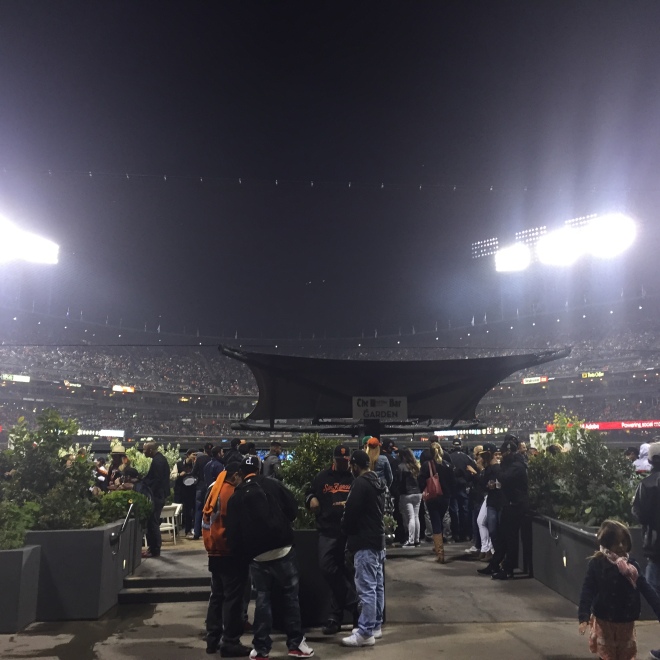 If San Francisco was going to have one unique feature to its ballpark, one that illustrates the character of the city, equivalent to Arizona’s hot tub, or Miami’s fish tank, the edible garden one million percent fits the bill (see: Silicon Valley, HBO). We love to talk sustainability, vegetables, and heck, even aeroponic growing towers around these parts.

The field is barely viewable from the garden, it’s more about mingling and atmosphere down there, where every possible inch of sitting surface area is taken, I would guess, within moments of the first pitch, if not before. Prior to the game, I had explained, in far too much detail, the magic that is Tony Gemingiani’s pizza, including but not limited to a play by play reenactment of his NPR interview about his win at the pizza world championships in Naples. We weren’t leaving without a trip to the upper deck to score a slice, but lo and behold, there is another installation of Tony’s Slice House right outside the garden.

Sadly, this was an unsatisfying Tony’s moment for me, as I ate the last cold slice of a pie that had been sitting out, the cheese and grease had hardened, giving it the texture of chewy cardboard. 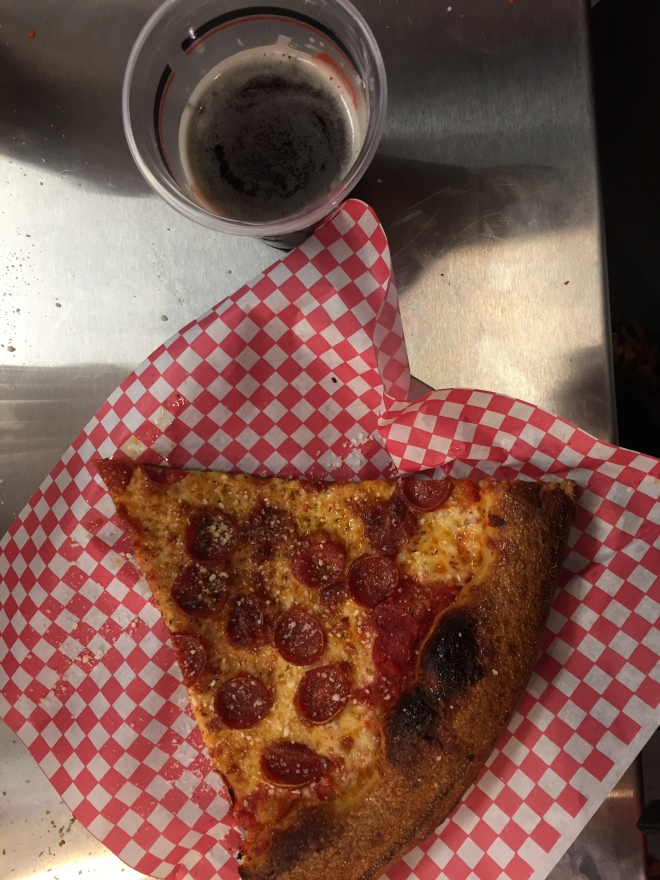 We photo op’d in the center field cable car, took a gander at McCovey cove, discussed the brick posts that spout like a blow hole after a splash hit or a win, then bolted. We dipped into Zekes, http://www.yelp.com/biz/zekes-diamond-bar-san-francisco, a nearby sports bar that according to the yelp mob, serves the worst food in all of San Francisco. Zekes is a divey sports bar, with Midwestern style faux wood paneling and loads of TV’s. I would give it a thumbs up for that, but now that I’m thinking about it, I’m pretty sure it’s a Dodger bar, and that, my friends, is strictly verboten.

Post game best practices are to get to a bar/restaurant some distance from the park (unless you can find a spot in one of the nearby warehouse sized spots like Lucky Strike or Pedro’s) then marinate for about an hour until uber demand has subsided and/or the sidewalks are walkable. We adhered to this regiment (at Zekes) then proceeded to a mokgeolli bar in the Western Addition (whaaaa??? there are mokgeolli bars in San Francisco?) named Zoomaak, attempting a meet with one of the employees, a friend of Jae-Min’s. http://www.yelp.com/biz/zoomaak-san-francisco

Zoomaak’s proprietess (manager? owner?), a friendly Korean woman, ushered us in to a neon fantasy, full of white tables illuminated by undulating lights and an assemblage of disco balls

The soundtrack was loud and pop fueled, yet the place was fairly empty; giving it an oddly sterile effect. I think we were there at an odd hour, after the dinner crowd and before the late nighters. We pushed on though, with an order of the fanciest damn magkeolli I have EVER laid eyes on.

The beer selection was sort of fab too, a fairly eclectic selection of bottled imports. An order of Korean fried chicken, was, of course, mandatory. Unfortunately, due to the psychotropic lighting situation, I was unable to get a photo that makes any kind of visual sense. 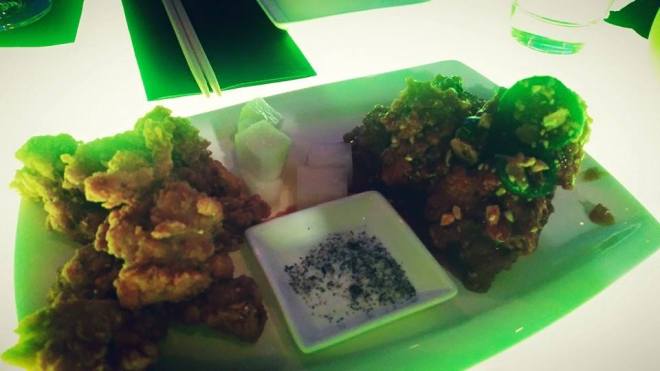 I mean, that’s green. I know. We ordered a mix of honey and regular, both of which were served boneless and coated in an exceptionally crisp crust. According to the boys, the flavor was on point, but I wouldn’t know. You see, I had contracted the Devil’s cold a few days prior, and right about this moment was when I lost my ability to taste. For FOUR DAYS.