Blustem Brasserie scores a lot of points for convenience factors; the first of which is the walkable, parkable, locale; a few short blocks from Bart, Union Square, the Westfield, the Moma, and the Metreon; within striking distance of three paid lots. The space is roomy, sprawling and totally accessible, perfect for large groups, people with kids, folks in wheelchairs, etc. The generously proportioned bar is outfitted with cushy, full backed stools, the tables aren’t crowded together, walkways are wide, and though the restaurant is fairly cavernous, sound levels remain completely tolerable. The hours are liberal and require zero guesswork, 11-11 daily; a reservation has yet to be a challenge, and most importantly, they serve the full gamut; brunch, lunch, happy hour, dinner.

My first visit was during Sunday brunch, wherein Bluestem scored another point on the agreeability scale by offering a refreshingly egalitarian menu; giving near equal billing to both breakfast and lunch fare; smoked trout salad, steak tartare, French onion soup and the like sitting shoulder to shoulder with your benedict’s, hashes, and frittata’s. I get pretty frustrated being strong armed into eggs at 1:00 on a Sunday, and if you don’t go ethnic, that’s pretty much what you’re going to get in these parts. Kudos to Bluestem for accommodating us lunch lovers.

We started with some Kennebec’s, prepared steak fry style, thick, with hot, fluffy potato inside, served with a creamy, mayo based dip (or did I request that? Possible.)

My cocktail was the Rude Awakening, a perfect morning pick-me-up, composed of refreshing cucumber, a little spike of jalapeno, tart lime, agave, and, of course, the most necessary of ingredients, tequila. 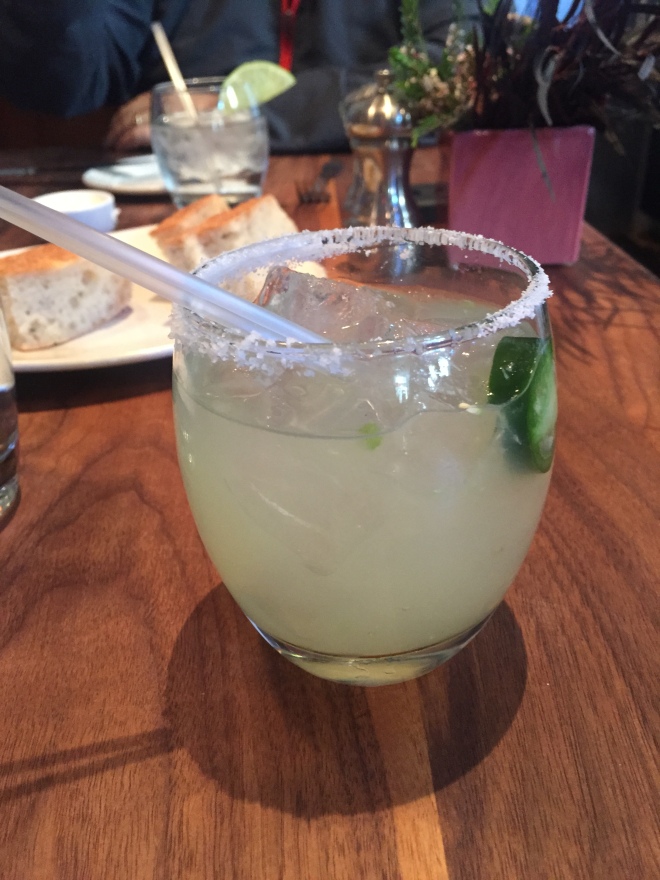 The brunch burger was perfectly satisfying and ate relatively well, despite the stack of items loaded upon that bottom bun; no less than hash browns, avocado, pickles, bacon, both a hamburger and sausage patty, a fried egg, and house made American cheese (my highly processed knight in shining armor). 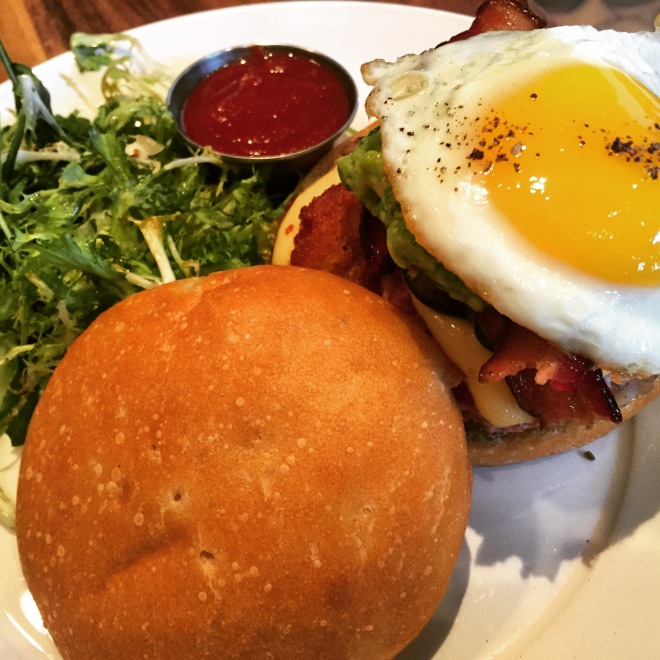 The fried chicken and waffles was a solid version; basically just as it should have been; nothing awe-inspiring, nothing irritating; it just was what it was. The chicken coating was pleasantly thick and salty, the meat inside a little dry, the waffles, though pleasingly crisp, just, waffles; it begged for honey and hot sauce, the traditional accoutrements for good reason, but alas, it was served only with maple.

Bluestem packs their Mac N Cheese into a little cast iron ramekin, keeping the goods within piping hot, topped with toasted bread crumbs and a healthy dose of shredded cheese.

The house made American cheese saddled up and galloped back into town on this one, making for a really rich, velvety sauce, teetering the line between goopy and soupy, but not crossing over. The pasta held up well under that onslaught of wet, maintaining some of its firm texture. I do prefer an M&C that is both saucy and stringy; there was none of that to be found, but, that’s not what they were trying to achieve.

My return trip was during dinner, the inaugural cocktail, the Toasted Sage Gimlet; London Dry Gin, Carpano Bianco, Toasted Sage. Bluestem does cocktails really well; liberally poured and well-balanced, while being blessedly unpretentious and lacking stupid, nonsensical garnish. They run $12 a piece, which I know, if you are reading this from most other cities/states/countries sounds absurd, but, in reality, that is in keeping with the local industry standard.

From the starters menu, we ordered the grilled lamb meatballs,

each perched atop a dollop of mint yogurt, served alongside a bulgur and olive salad, garnished with pine nuts and currants, finished with a splash of molasses date syrup. They were generous in size, and tasted distinctly of the grill, the bulgur and olive salad lending a nice texture, the yogurt providing tangy balance. Deez balls were a table favorite.

I was unfortunately disappointed by that one. I guess I pictured an actual soufflé; puffy, eggy, airy, made with goat cheese and beets. Instead, the dish ended up being more of a hunk of goat cheese floating in beet water. Perhaps this started out right and just fell, as soufflés do, resulting in a dense cake with a somewhat mealy mouthfeel.

Our main was the Fallon Ranch Pork, a large, bone in, chop, with crispy duck fat potatoes, fennel kraut, apple mustard, and Riesling pork jus. It is an odd and slightly creepy coincidence that the potatoes have taken on the appearance of a duck in this photo, not a result of the kitchen being cheeky. Or…? Nah.

It was a lovely cut of meat, juicy and well seasoned. I’m not the biggest fan of the whole pork and mustard thing, but, that’s what I ordered, so, not really fair to complain about that. The duck fat potatoes had a thick and crispy exterior with a hearty, almost deep-fried flavor. Fennel kraut, always a yes. Any kraut, always a yes. Us three girls passed that bone around and gnawed it clean, because there’s no meat like bone meat.

Our dessert that night was definitely my favorite dish yet, the Doublemint; “boozy malt-vanilla bean and wintermint malt, maltballs, bruleed marshmallow fluff, and candy cane crumble”.

This dessert obviously requires a hearty affinity for both mint and malt; qualifications our table had no trouble meeting. Being a sap for all things malt, all things mint, all things ice cream, and for real, all things booze, as well as being a marshmallow fluff loving child of the eighties, it’s almost as though this arrived to me in a fever dream.

There was a considerable amount of marshmallow fluff to be had; it must have gone a good two inches deep into the jar. Under it? Rich mint ice cream full of texture treats, little floating malt ball mines, chewy and chocolaty.