Krakow: The Wieliczka Salt Mine

Poland is home to the Wieliczka salt mine, a 13th century underground labyrinth that spans 120 plus miles, containing 2040 caverns; though what is of most interest to visitors is the mine’s contents; sculptures and chandeliers carved out of salt, centuries old mining equipment, and a fully operational chapel where concerts are occasionally held, the acoustics being famously unique. The mine also harbors its very own sanitorium (referred to as a “health resort” in current parlance, but, “sanitorium” conjures a far more satisfying mental image) where sufferers of various respiratory maladies can laze about, breathing in the micronutrient rich, ultra pure air. Table salt was the name of the game until about 1996, when a) the mine flooded and b) table salt prices couldn’t sustain mine operations. Nowadays, the mine is one of Krakow’s biggest tourist attractions and sources of economic stability, drawing a million plus visitors per year. http://www.wieliczka-saltmine.com/about-the-mine

Wieliczka is also the name of the town in which the mine is located; a pretty, green, quaint little spot about five minutes by cab from downtown Krakow. 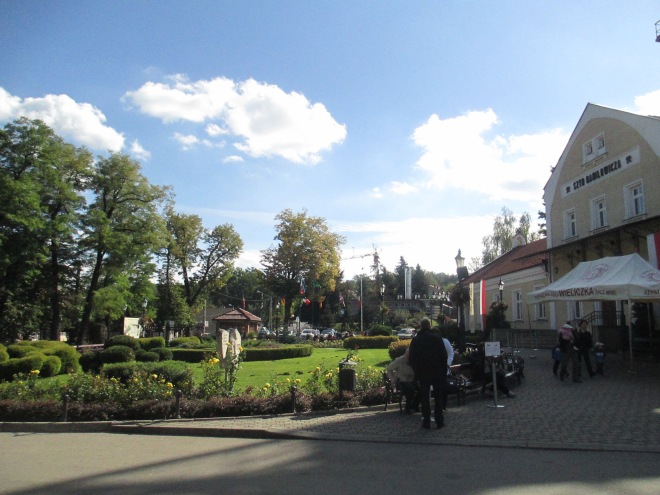 We bought our tickets for the English tour (other language options are Russian, French, Italian, Spanish, German and Polish) then got into line with about forty other people who would be our companions for the duration.

The tour began with the lot of us lining up in front of a door. When all were accounted for, we shufffled through to a set of wooden steps. Fantastically, the woman next me panicked about being locked in when the door closed behind us, which of course we weren’t, but, fabulous. Three hours deep down in the earth with a claustrophobe. The first of many unsavory experiences to come that day.

We slowly, painfully, descended fifty-three sets of wooden stairs, or fifty-three floors. The claustrophobe talked nervously the entire time, making it glaringly obvious that she would be damned if anyone else was going to enjoy this tour. We came to a tunnel at the bottom of the stairs where our guide introduced herself (Olga) and named the group (123). Olga123 made her safety speech then; the gist of which was, be diligent about sticking together and don’t fall behind; the danger of getting lost in the miles of unfamiliar dark, territory a real one. And then. A baby started to cry. Some jackass brought a baby into the depths of the earth, an experience the poor baby’s ears certainly could not accommodate. Some unbelievable moron was bringing said angry baby into miles worth of small, confined, tunnels; tunnels with no exits. I’ve never felt so murderous in my life.

The next step in the process was to go through what felt like a never-ending set of ventilation chambers but in reality was probably three or four. The chambers were basically hallways about four people wide, the “ceiling” about 6’7” high. The procedure unfolded thusly; Olga123 opened a heavy wood door, the entire group shuffled into a smaller corridor with a door at the front of it, a designated tour member would close the door in the back, leaving us standing in the enclosed space. We would then wait for a minute before the door in front of us was opened, we shuffled into another chamber, and so on and so forth. We got stuck in the first or second chamber, as in, everyone had packed in but we were missing two people and couldn’t close the door in back. A woman announced that we were not able to move on because the mother with the baby had stayed back (which Olga123 expressly forbade during her speech) to breast feed. Olga123 said “Jesus” and visibly, but not audibly, lost her shit. She didn’t know what the hell to do, the rest of us stink eyeing the poor (unrelated) lady who made the announcement, while the claustrophobe repeatedly and urgently warned that we would soon run out of oxygen (one heavy door was still open, mind you). 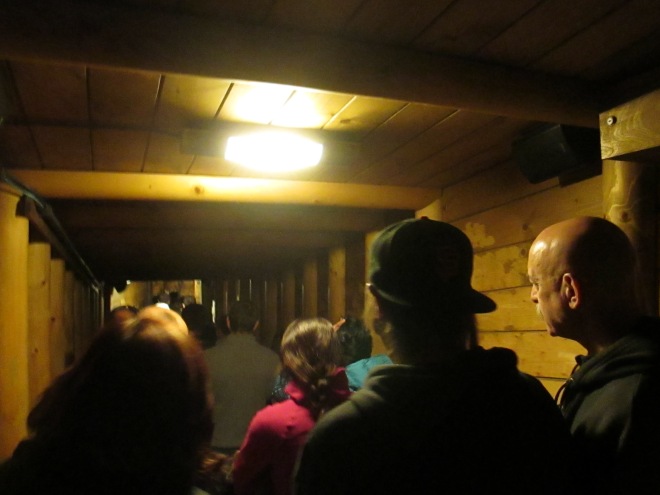 Once that nonsense was over, we came to our first display. As Olga123 began her spiel about it, the baby began to cry louder and harder, then someone else started to speak in another language, talking consistently throughout and over Olga’s speech. We couldn’t hear a thing. Turns out it was a Korean group who decided to sabotage our tour by bringing in their very own handy-dandy translator. And so it was, that we spent three hours underground with a crying, nay, screaming, baby, a pissed off tour guide (I’m with you, Olga123), a Hangul speaking tour guide saboteur (and his crew, a group of shoving, body checking, elbow throwing ajummas), and one panicked claustrophobe, equipped with her own flashlight, maniacally flashing it about the cave throughout.

Soon, the world’s largest underground chapel revealed itself beneath us. It was absolutely stunning; everything, and I mean everything save the wood beams, chandeliers and floors included, was made out of salt.

The walls were lined with ornate “etchings” or sculptures, one of which was a spot on rendering of the last supper, in salt. Apparently, one of the miners was sculpting down there, either went to art school or was sent there, returned to the mine, then sculpted well into his eighties. 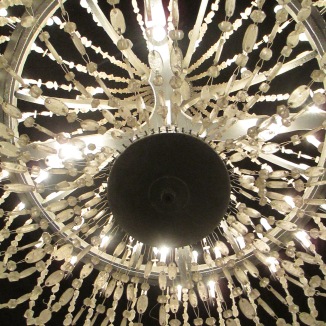 Of course, no underground Polish cathedral of salt sculptures would be worth (its salt. Wink) a darn without a salty replica of Pope John Paul II’s big old mug (full body, robes and all, if you must know) him being the pride of Poland and all. And this guy, whoever he is.

We were given some time to mill about and take in the various sights of the cathedral. Me, I took that time to lay down some stink eye. 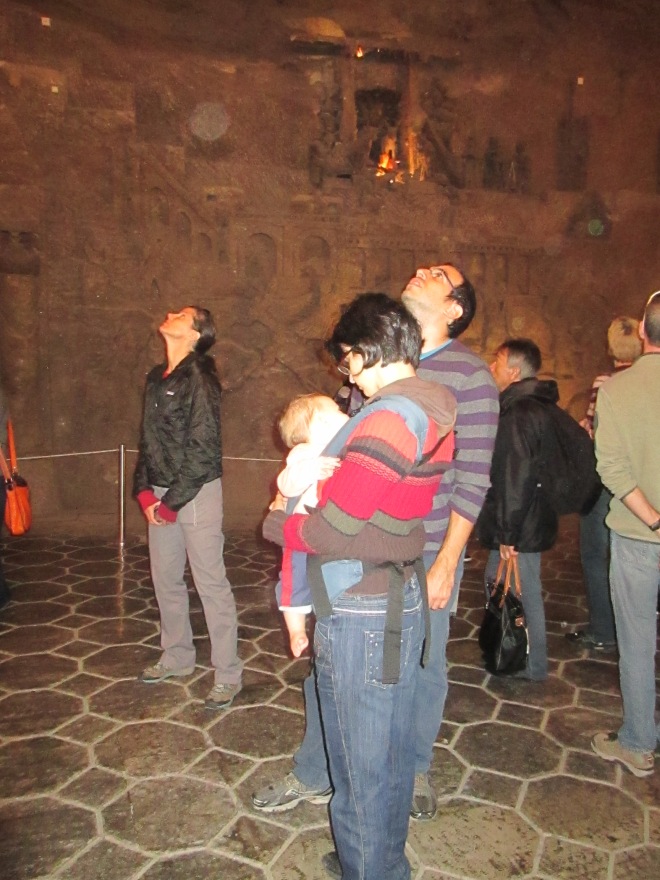 From there we shuffled in to an enormous cavern containing an underground salt lake, the most salient in the world at 36 or 37 percent (SLC is like 28), which was actually really cool. They played us some classical music to demonstrate the acoustics, and if I remember right, there were some little colored lights which were lit intermittently, showing us both the size of the cavern and the depth of the lake.

We had to stop AGAIN for the family, as we were soon to come upon an escape elevator and Olga123 ordered them on it (solid move, Olga). Of course, we all had to stand around waiting for the damn thing to come and take those jerks away, which took what felt like hours. I longed to be in that escape elevator in their place.

The tour which we could not hear dragged on, inciting thoughts of hari kari in myself and my travel buds, when Olga123 blissfully announced that our time together had come to an end. We simply needed to follow the tunnel we were standing in, then wait for an elevator that we were told would take about a half hour to reach us. The four of us made a run for it to secure a spot in the front of the line, only to have a bunch of dicks cut in front of us a half hour later. Finally, a really large group of us were allowed past a velvet rope, then found ourselves shuffling slowly through a bunch of small tunnels again, with the Koreans throwing elbows and a bunch of random little kids getting in the way.

Then, more ventilation chambers, the ceiling getting lower and lower, the walls, tighter and tighter. There was simply no end in sight; I longed to be out of there so desperately that I started to feel the panic of claustrophobia rise within me, which just heightened my awareness that I was trapped. We came to a stop at the bottom of two platforms; whistles were blowing, groups were being separated; the whole scene was utterly confusing. When we were in front, they told six of us to climb the platform to get the lift, where we climbed into a box that was maybe 3×5. Maybe. Six of us. We couldn’t even get the door closed by ourselves. 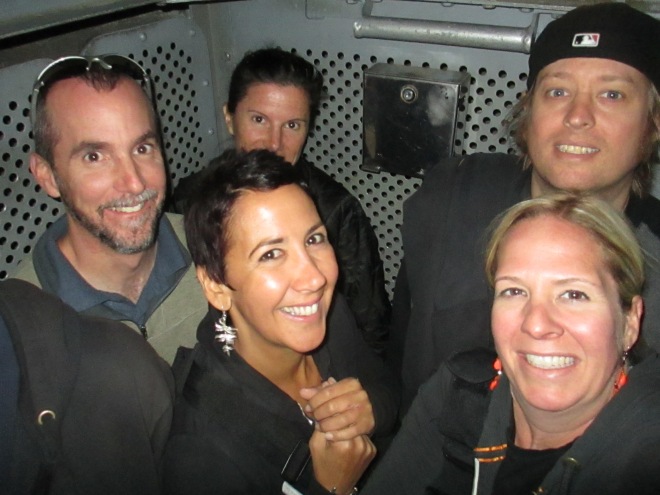 There was another box like this under us, and another under that. I can’t even fathom how the claustrophobe handled this. The hard hat miner guy outside rang some loud bell and we started to ascend at a jagged, lethargic pace. And then, Finally. Sunlight.