Eastern Europe: The Journey to Budapest

Per usual, we did not make the most sound decisions on departure day. We had an early evening flight and everyone was too anxious and excited to wait at home, so we headed to Burlingame for a late Japanese lunch before we flew off to the land of heavy meat. Unfortunately, our Japanese lunch spot was closed, our good intentions ruined, and we ended up eating a disgusting spread of fries, wings, garlic bread, quesadillas and beers at Steelhead Brewery, the warehouse of shitty food.

Of course, we spent our final pre-flight moments at our usual horribly appointed bar at the very end of the international terminal, where the only brown booze on offer is Jack *gag* Daniels.

We were being carried to Frankfurt by United, and I don’t think I need to say this but, if you can avoid flying international on United, please do so. Actually, if you can avoid flying international on any American carrier, please do so. Needless to say, we were nickel and dimed to death over the next nine hours and served some really terrible food (beef cannelloni, stale roll), all while squeezed into contortionist positions. 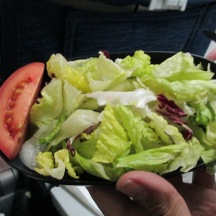 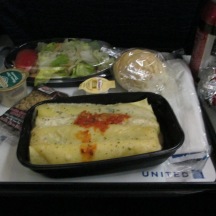 Also, a bunch of spills occurred and both Jake and I emerged in Frankfurt, wet.

We were, of course, sore and tired upon landing, but so excited to be in Germany it didn’t really matter. A friend had just traveled through that airport a few months prior, only to report back that it was a terrifying place, that anti-American sentiment was strong, that people were brusque and rude. Nothing could have been farther from the truth…the one “official” we dealt with was a cute bubbly blond who stamped our passports and enthusiastically welcomed us to her country. It was as though she was as excited as we were. The building itself was really modern and totally spotless. I expected nothing less of Ze Germans. 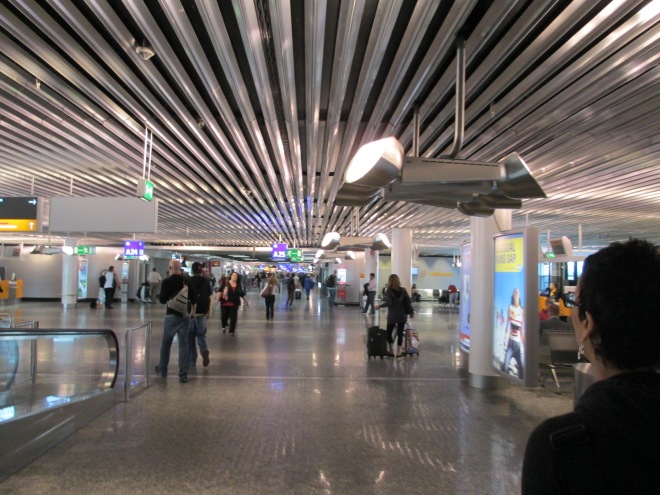 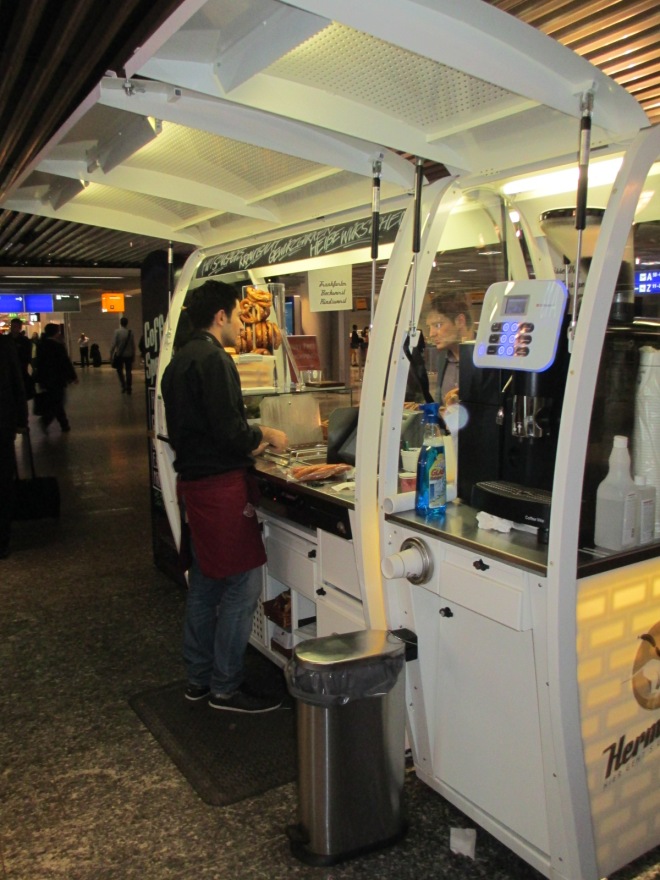 Lufthansa offered free coffee, magazines and newspapers at the gate; a very nice, and very un-American, touch. We had our first Frankfurter there as we waited to board the bus to our connecting flight, served with a Kaiser roll, mustard, and, of course, we added a round of beers. It was absolute heaven. 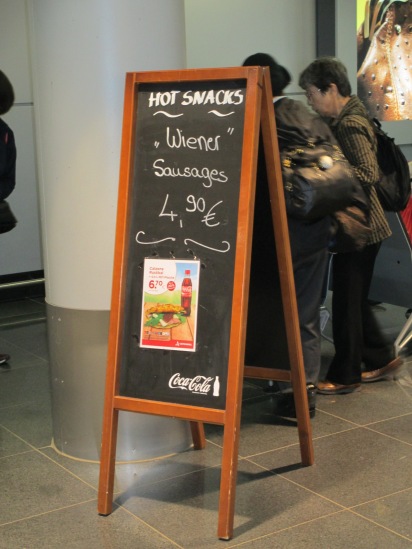 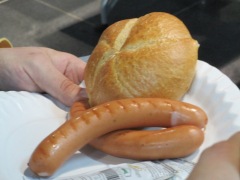 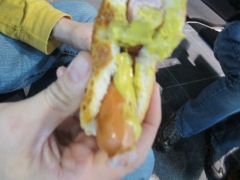 We boarded a bus and were driven across the tarmac to our plane:

After a really bumpy take off, I was given a little plastic box that contained some of the best and most perfectly seasoned potato salad I have ever had (with chives in it), a plump little sausage, a short fat pickle, two sesame bread sticks and the cutest goddamned miniature folding fork that was ever made.

Shortly after that, the sweet flight attendant, who had taken an interest in us, showed up with a glass of white wine and told us it was a really nice Riesling. When I finished my wine I ordered a robust, German beer which was delightfully enormous. Good luck finding ANY of that on an American plane; a friendly flight attendant, a nice Riesling, a hearty beer, and the best damn potato this side of Idaho. Also, it was free. It was like an out of body experience. Us Americans, we suffer so needlessly on airplanes. So very, very, needlessly.

We arrived in Budapest around 7:00PM local time. We paid for an airport shuttle and shared a ride into town with one older man and one couple. At first everything was very 1980’s communist looking, big block buildings that were all run down, broken windows, graffiti, overgrown weeds. Once we got closer to the city center it all started to morph into charming, old Europe; stone buildings, cobblestones, long winding alleys. I was blown away by how beautiful it was. When the river emerged, with the lit up chain bridge and castle, it was truly breathtaking.

We were dropped off at our hostel, the Garibaldi Guesthouse, http://garibaldiguesthouse.hu/ which is by the parliament building and out of the city center; a fairly quiet part of town. It wasn’t very clear what we were supposed to do to check in or to locate the host. We just stood outside, mouths agape, at some focacta call box that we didn’t know how to operate. Eventually we punched the correct numbers and were connected to a voice that told us to proceed to the third floor. And then, holy shit, what a confusing place. The cement stairs wrapped around some vertical iron tunnel, which after much investigation revealed itself to be the elevator, which was so tiny it could only accommodate two of us with our backpacks on. 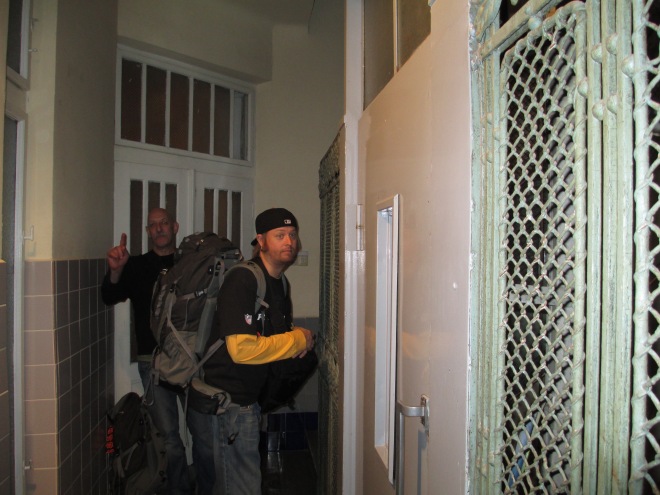 Randi and I took the stairs. Somehow, there were like two floors in between the second and the third floor so in the end, we just followed the elevator to the not-at-all logical place where it stopped. Then we stood on a landing that had a pair of metal doors on each side, with buzzers that looked light switches (four buzzers on one side, one on the other), and sticky notes that said “tourist” and other things which we did not understand, until finally we succeeded in finding Ena, the proprietress, who gave us a far too lengthy tour of the rooms and their features, had a face off with me over a picture I took (then had to delete, in front of her), yelled at us when we walked the wrong direction, tried to open forbidden doors, and put our bags in an unsavory spot (in our rooms). There was a whole lot of “NO!” accompanied by a whole lot of finger wagging. Our room was spacious and comfy; it had a little kitchenette and a balcony, but if boutique hotel is what you fancy, the Garibaldi Guesthouse is not for you. It did suck to wake at 3AM with jet lag and have no TV to watch, nor access to any food.

Once the check in process was complete we headed outside. Garibaldi street didn’t have much going on so we walked to the corner and took a right on Nador St, to find two bar/cafes with people sitting at tables outside. At the first of them, we couldn’t figure out if we should sit and order at the table or if we should order at the counter, so we moved on to the second, where we sat at the bar, received a glare, some terse communication from the girl working, and then, we were ignored. A bit discouraged by our first few moments in Budapest, we walked on until we found another empty, quiet bar with sports on, where we were welcomed with open arms by the bartender Daniel. With that, we settled in for our first drinks in Hungary, at the Dogs Bollix Pub. 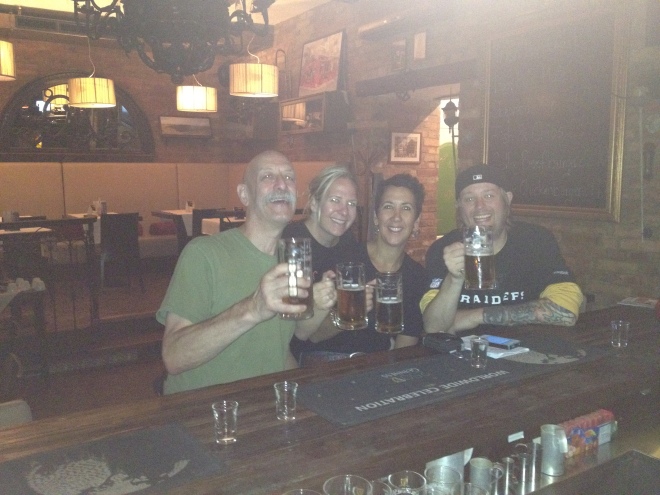 We were more than ready to enjoy our first in-country swig of unicum, otherwise known as the “Hungarian national accelerator;” an herby (40 herbs, to be exact), sweet yet bitter, digestif.

Eventually, we wandered off, in search of food. We tried the route along the river first, which yielded nothing, then on our way back we stumbled upon Trattoria Pomo d’oro, where we ended up having the most unexpectedly phenomenal meal. http://www.pomodorobudapest.com/index-en.php We were all in desperate need of some greens, so with a good amount of suspicious hesitation we included a tuna salad in our line-up. You just never know what the hell you are going to get when you order salad in another state, let alone abroad; California is in a league of its own when it comes to produce. This salad, however, was incredibly fresh and full of bright flavor.

Next up, pasta with goose liver and morels, all rich and decadent. We were some lucky ass fools, falling into this meal. 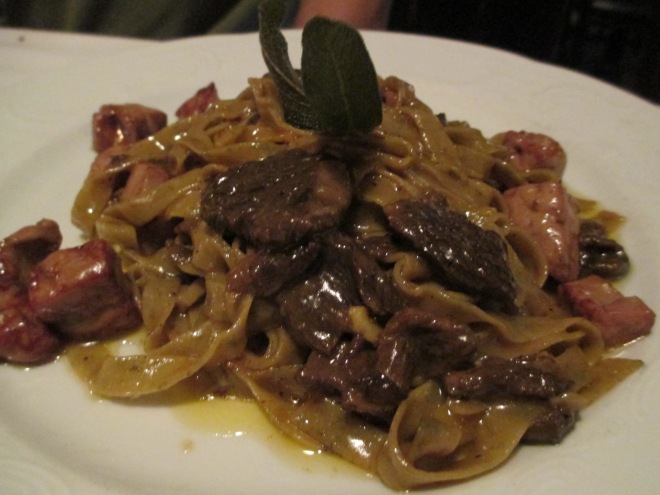 We wrapped things up with this pizza, which was in keeping with the rest of the food at Trattoria Pomo d’oro, with a well-balanced sauce, a light, crisp crust, zesty slices of prosciutto, all laid out in the perfect ratio. It was spectacular. Even the bread, which was hearty and dotted with caraway, served with chive butter, was extraordinary. This experience, we felt it was an omen of good things to come. And it was. Budapest is one hell of a food city.

After dinner we got lost for a while, and then ended up back at the first café, where we took a seat on the sidewalk.

We sat with a round of beers, and chatted, until suddenly, there was one less voice in the conversation.

Mikey had fallen out.