Fujiyoshi’s location, on Post st between Jones and Taylor, (conveniently across the street from our apartment) has been a bit of a revolving door, dead restaurant spot since I’ve known of it, having had three different inhabitants in the six years that I’ve lived in the neighborhood. The first incarnation was delicious Thai, where they served what used to be our favorite noodle dish in the city. We were heartbroken to see it go, only to be replaced by Kyu, which was an overpriced and not well executed izakaya joint. Fujiyoshi moved in under the radar, originally as a “pop up” within Kyu, which wasn’t at all clear to the casual passer by. At the time, it seemed that Kyu was simply expanding their hours and menu to include lunch service and ramen. After a few months, the sign changed to read Fujiyoshi instead of Kyu, and by the time I meandered over to check it out, the menu had changed completely from the original izakaya concept to a become a long list of Japanese comfort foods…ramen, mentaiko, tempura, onigiri, sushi, okonomiyaki, fried chicken or pork cutlets, curry, etc., along with the usual list of Japanese beer and sake options.

The space is long and narrow, with a low dining counter and galley kitchen to the right. I far prefer the high counter seating that was there during the Thai years, but it later served as a sushi counter, so, now it’s just a kind of awkward low bar seating. Wood booths line the left side of the room, with the sweet Japanese touch of unattached cushions to soften it up. There is a platform of sorts in the back, up a couple of stairs, were there is seating for maybe twelve more people and, the bathrooms. 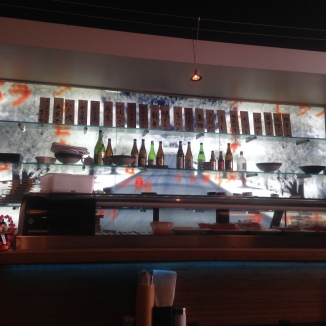 On my first visit, I tried their sushi, going with my default lunch order, the Fujiyoshi roll (Rainbow roll, basically) I found the rice to be fairly gummy, which was a big bummer, but the rest of the components of the roll were just fine and I wasn’t offended overall. I definitely would not suggest visiting Fujiyoshi as a sushi destination, but, if you are in the neighborhood and need a quick sushi fix, it’s passable. 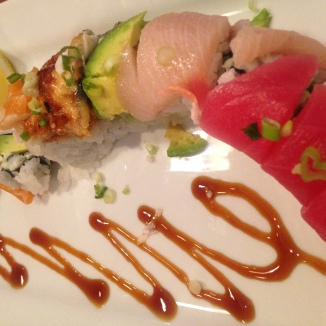 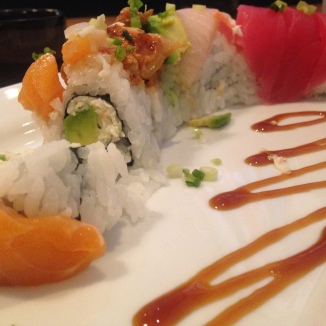 On my second visit, Jake and I ordered our beloved Tonkotsu ramen, and one sushi roll. They do all of the right things with the ramen order, giving the diner plenty of options for personalization. Broth/flavor choices are tonkotsu, miso, or shoyu served mild or spicy (with thickened “kotteri” broth as available for the tonkotsu) noodles are either thin and straight Kyushu style, or thick and wavy Tokyo style, cooked to your preference of soft, medium or hard. The list of add-ons is pretty comprehensive, including some which are just extra doses of ingredients that are already in the soup, and some that are actually additions, such as mustard leaf, broiled pork belly, and corn. Full disclaimer, I’m not even close to being a ramen junkie. I would never wait in line for the stuff. I far prefer pho to satisfy my hearty asian soup needs, but ever since ramen made me weep with culinary joy in Japan, I’m a little more apt to seek it out locally these days. That said, I’m just not willing to do the whole wait in line song and dance that accompanies all of the trendy/popular ramen restaurants in the Bay Area, and I don’t have to at Fujiyoshi, which is part of the appeal. While the lunch crowd has been almost entirely Japanese during each of my visits, they have yet to garner any kind of cult following, which may suck for them, but it’s pretty nice for me.

I was totally satisfied with my soup, which arrived full of thick and creamy broth, thin, firm noodles, topped with a layer of green onions, a square of nori nestled into the side, along with a couple of pieces of Chasu pork, bamboo and kikurage mushrooms, and a seasoned egg bordering on soft-boiled (hanjuku, I believe, is the term for that) floating in the mix, with a healthy dusting of white pepper garnish.

The table is set with wood chopsticks, which, unfortunately make me gag thanks to the wooden spoon that came with the malts I ate at Candlestick park as a kid…slivery wood on teeth..*shiver* along with your typical ramen accoutrements; minced garlic, togarashi, etc. 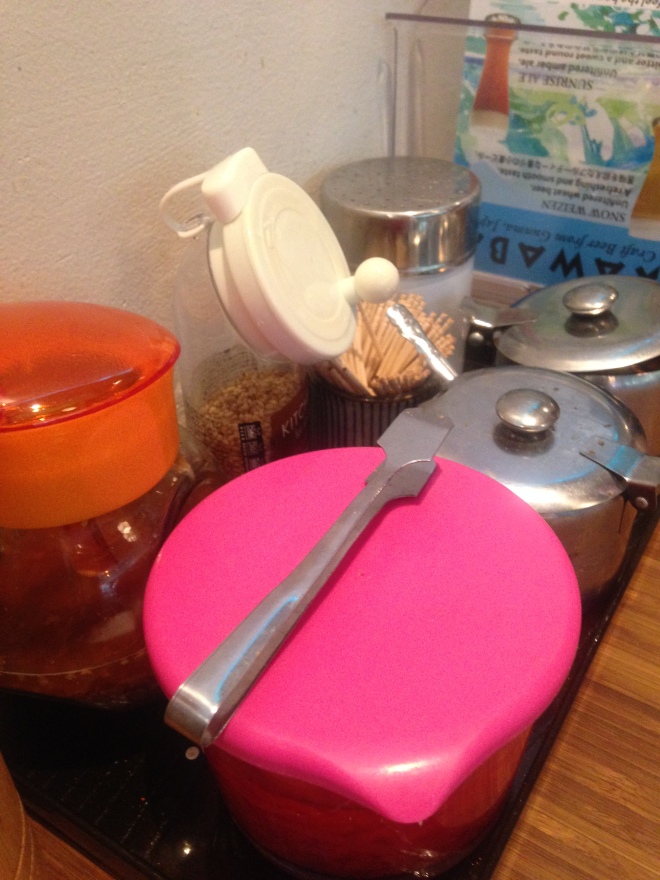 The sushi roll, on the second visit, was more disappointing than the rainbow roll I ordered the first time. Again, the rice was gummy, but worse, the flavors were a mish mash of terrible. The list of ingredients reads “avocado tempura, yellowtail, jalapeno, CHILI SAUCE, cilantro.” First off, I missed the mention of cilantro. Second, CHILI SAUCE means tomatillo sauce. Clearly this has made more than one person unhappy in the past, since they made a point of putting it in all caps, but chili sauce, to me, does not denote tomatillo. I suppose the name “Mexico roll” should have tipped me off, but, what can I say, it didn’t. It was actually really gross, eating gummy sushi swimming in green tomato sauce. The Mexico roll’s flavor combinations just do not work. At all. 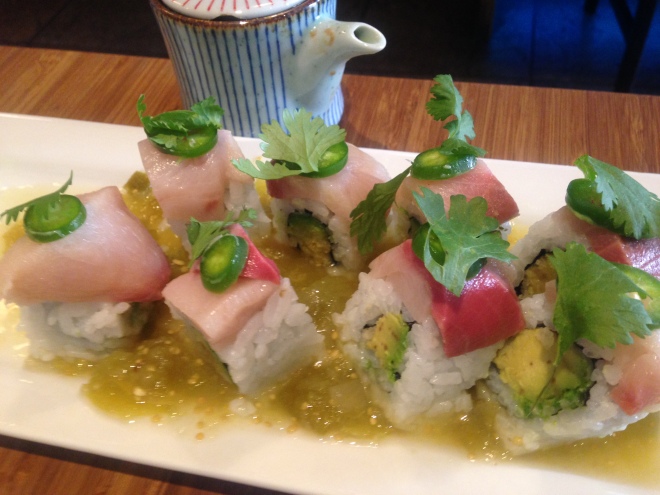 On the third visit, we got one of their incredibly well priced specials; a bowl of ramen with a side of curry and rice for $12.50. We’d really been wanting to try to their curry, so this was the perfect opportunity. The ramen was equally delicious to the first visit-this time we went Tokyo style noodles. While I prefer thin and firm, I was not even close to unhappy with this version. We ordered it spicy and it arrived with a hearty dollop of hot sauce on the top.

The curry side was just a simple curry and rice. We ordered it spicy and found it to be disappointingly mild, but, the flavor was there, and Japanese curry just presses all of my comfort food buttons. I see myself eating their version on a hungover Sunday night, when I’m too lazy to even change out of my sweats for the walk across the street to pick it up. 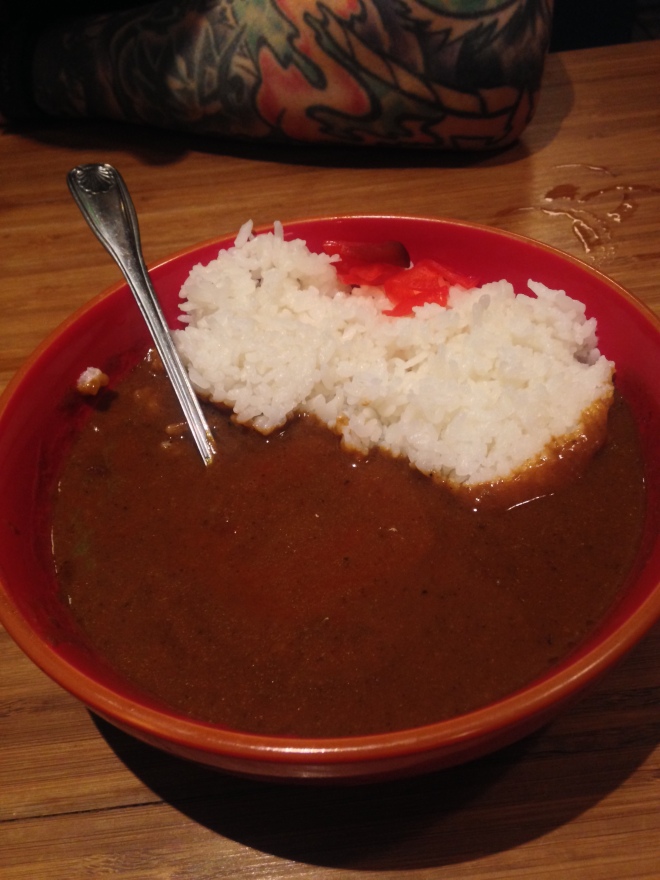 Service is an issue at Fujiyoshi. It was exceedingly slow on my first two visits; slightly more attentive on my third. Upon reading their yelp reviews I see that I’m not the only one who has had this experience, and I’m sure it’s a contributing factor to their lack of popularity. Not that the place is ever empty, but, seats have always been readily available. Hopefully my last visit was a sign that the service concerns are being addressed and that this part of the operation will steadily improve.