It’s a little chaotic, trying to figure out how/where to see a baseball game in Korea. For starters, the teams are not affiliated by name with a home city like they are in the states. They are affiliated with a corporation…i.e. the Kia Tigers, the LG Twins, the SK Wyverns, so it was hard for me to understand which team plays where. Secondly, you can’t just decide you want to see a game at a specific stadium and pull up said Stadiums website, because the stadiums don’t have websites (I have since been told they do, but I still cannot find one). If you have a specific team you want to see, you can try the teams website, but many of them do not provide any information in English. Korea only has one league for the whole country, which is made up of about thirteen teams and is grouped under the KBO, or Korean Baseball Organization. You can try their website, but honestly, if you are a couple months out from a trip, it is of no help. This was my best resource:

Seoul kind of has two stadiums. Jamsil and Munhak. Munhak is actually in Incheon, about an hour subway ride away. From what I could gather previous to our trip, Munhak is less popular and therefore, day-of ticket purchases are easier (or so I thought). Since my brain melted just trying to figure out who was playing where and when, advance ticket purchase was a far more extreme prospect than I could handle. So, the plan was to get to Munhak a little early on May 5th, where we would buy our tickets. The morning of the games, I consulted the front desk at the Ramada. I told Kirby, the fabulous man who was working, what our plan was. He told me that Jamsil was about five minutes away from the Ramada and that we were basically pretty stupid if we took the subway all the way to Incheon. Both games, at Jamsil and at Munhak were surely sold out according to Kirby. It was a Monday, but unbeknownst to us, it was a holiday. Children’s day specifically. One of the many days celebrated during the Golden Holidays.

I asked if we could get scalper tickets and he looked at me as though he had to swallow a little vomit. They don’t do that in Korea. Very untoward. He said we could buy tickets there, that they save some for day of sales, but we had to get there early. We arrived two hours early to find that a LOT of other people had the same idea. 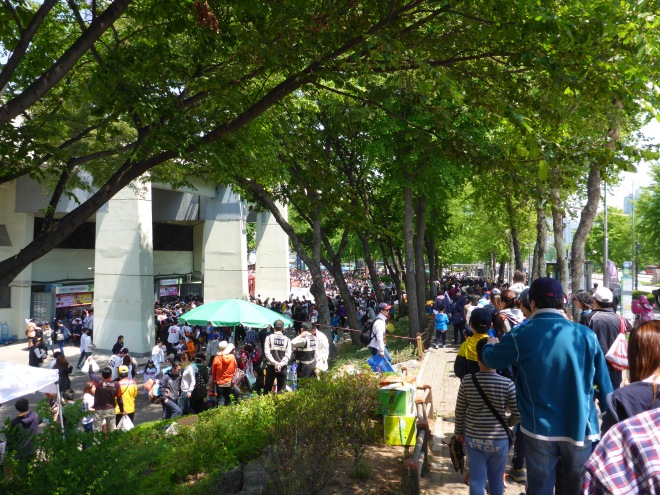 At first, we waited in that long line that wrapped around the outside of the stadium, certain we were in the right place to buy tickets. Somehow, we figured out that was actually a line to get IN, and that we needed to go elsewhere for actual tickets. I spotted some white faces in a different line and asked if they spoke English. Jackpot. American expats, ready and willing to be our translators/guides through the process.

We waited in this monster line for about an hour.

Not to worry, food and alcohol opportunities abound outside the stadium. We had cheap tall boys to sip on and a box of KFC to snack on. lest you should not realize KFC is an option, the Kernel is there to remind you:

Our American friends explained to us that we were purchasing the general admission tickets; the equivalent of American bleacher seats. At one point, we did indeed find a scalper, selling seats at $40 per,

but our friends told us that a) the tickets could be bogus (always a risk with a scalper) and b) they reserve plenty of GA tickets for same day sales, and we were 90% likely to get much cheaper tickets from the stadium. The line was a crush of people, not really organized in any way, and there was a good amount of cutting and pushing. When we got close to the ticket window a cacophony of sounds assaulted us, each window blaring bullhorned conversations in tandem.

With the help of our translators, we acquired four tickets that cost about $11 each. Our guys told us the next step was to get in the previous line, the first one we got in, for entry into the stadium. 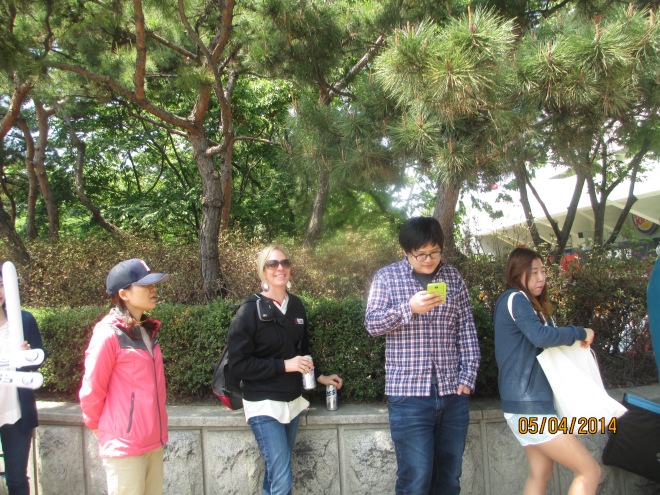 Outside Jamsil, there are myriad opportunities to buy food, beer, and baseball paraphernalia, which we took turns exploring while one of us held the groups place in line. The really awesome thing? You can take any/all of it in with you. Beer included. While there were the usual fast food opportunities, there was also some strictly Korean fare, like dried squid, ttokbokki, gimbap, and of course, Korean fried chicken. The tall boy beers were a mere three dollars. Three dollars! At a ball game!!??!! 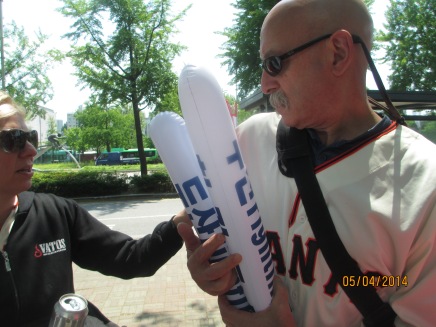 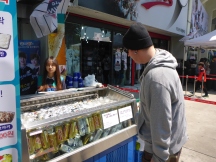 Some sage advice for you, dear reader. Post one person in your group in the entry line, and one in the ticket line. That entry line must have been a mile long by the time we got tickets, and the seating chaos that ensued as a result would have been mitigated had we been closer to the front. When we did finally get in, we walked into a drab concrete room, with one Family Mart dominating most of the space, bathrooms to either side, and the bottom of the stairs that would take us to the seats. There is no wandering/exploring the ballpark at Jamsil if you have GA tickets. That was the only area to which we had access, aside from the seats.

Wait. There was also a bang stick inflator. Of course. 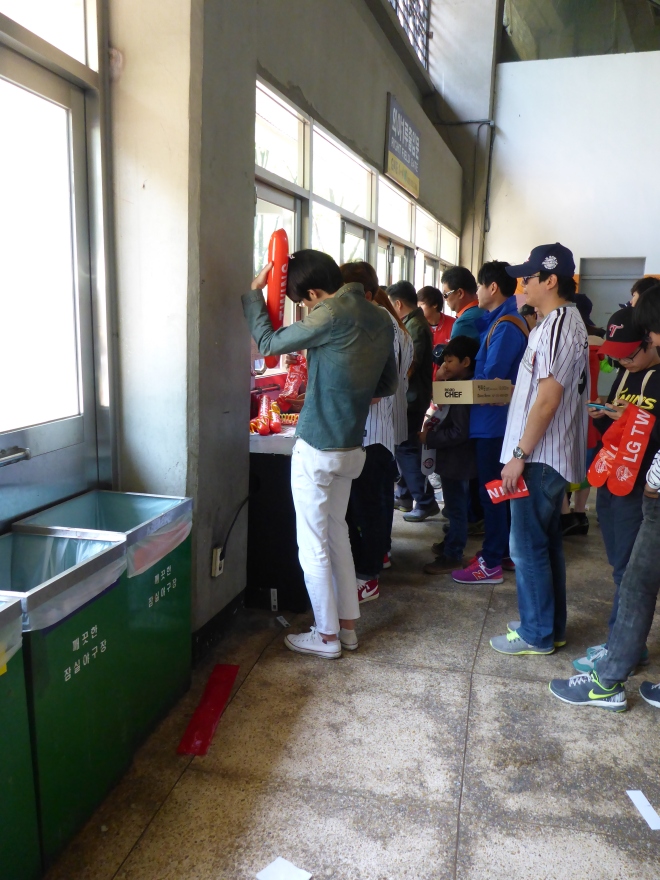 We took the stairs to go find seats and holy God there were people EVERYWHERE. First off, the seats are not bleachers. There are no benches. They are seats. Straight up seats, and in that large GA section of seats, not a one was available. Let alone four together. So we walked up the stairs to the very top, thinking surely we could find at least four separate seats up there. Instead, what we found was people splayed all over the back walkway, on picnic blankets and cardboard boxes and whatever else they could find to keep their hiking gear from getting dirtied by the concrete. 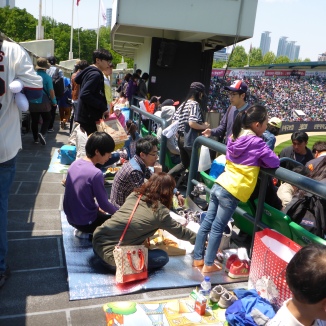 Some of them were even spooning for Christ’s sake! 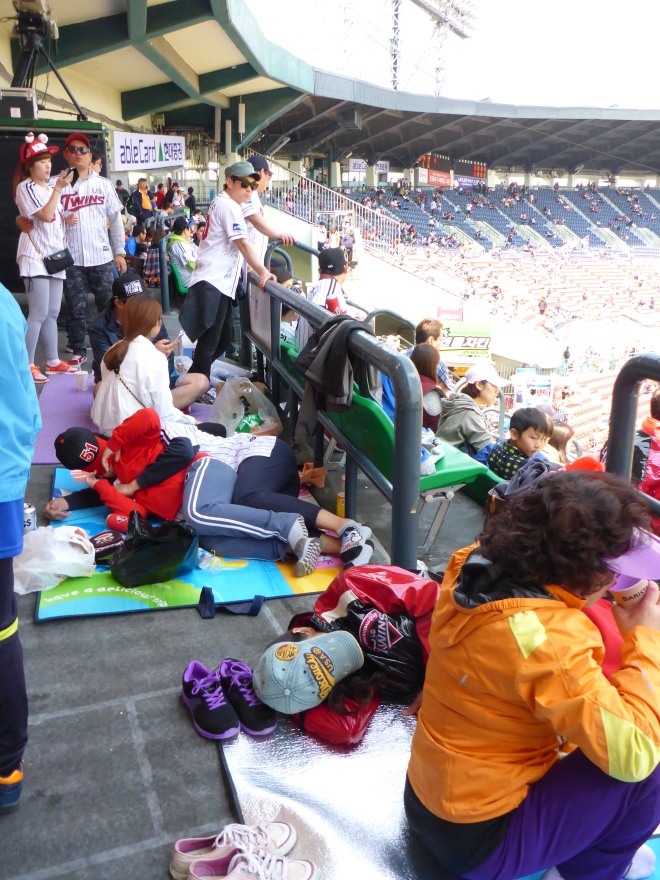 Literally the only piece of free space that we could locate was squeezed directly next to the garbage cans, and directly under a big sign. It was pretty uncomfortable, as we could not even stretch our legs out as we would then be blocking the walkway. I guess it’s rather American of me to care. I just…imagine the lawsuits that would arise from this situation in the US. Imagine them.

Once we were settled in our tiny little space (devoid of a field view), Jake and I went for walk to explore, during which it was reinforced that we didn’t have access to anything but the seating area and the room downstairs. We did, however, find a little more open space on the switch back stairs at the far end of GA, and there were a few people sitting there, so, despite our deep-seated feelings that it was totally inappropriate to sit there, (not to mention a crazy fire hazard) we decided to make that our home for the next few hours. 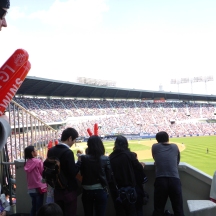 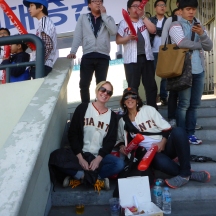 I shit you not. That was our best option. In case you were wondering what the stairways looked like between the seats.

There was also this family, picnicking on a part of the stairwell where the field was not at all viewable. Just there, picnicking in the grey concrete structure. God knows why.

So. Our view was pretty impeded, but it’s not like we knew any of the players on either team or had any skin in the game. We were there for the experience and an experience we had.

Korean baseball. As expected, they get pretty into it. Jamsil, it turns out, is considered the “home” stadium to both the LG Twins and the Dosan Bears, the two teams who were playing that day. Somehow, everyone in the assigned seating area of the stadium knew to sit on one side or the other respectively. The end result was like there was a dividing line down the middle of the stadium. Us, we were on the red side, which meant that we quickly deflated our set of white bang sticks and hid them in a backpack.

The other SUPER awesome thing about Korean baseball? Insies and outsies! You can just go outside and load up on cheap beer and food and bring it back in. I mean…I never! Collecting some grub from outside was our first order of business. We hit up this incredibly attractive (to me) hipster for some grilled yummies: 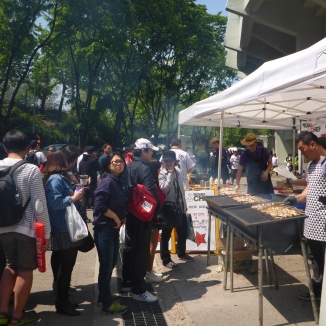 And “Road Chef” for a greatest hits box of Korean goodies…ttokbokki, sundae, tempura. Those people were total jerks to me, but, you can’t win ’em all.

The Road chef stuff was meh, but oh my LORD those grilled skewers were phenomenal, and not just because I wanted to run away with the guy who made them. He drizzled them with a spicy mayo type sauce. If you are at Jamsil, get you some of these. 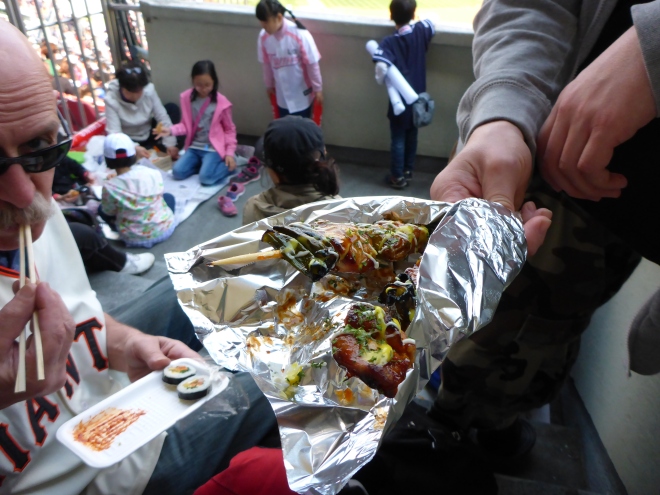 The game itself…It all began with the playing of the National Anthem, which I had never heard up to that point. I think it was particularly poignant on that day, it being the first children’s day after the ferry disaster, which happened about a week prior.

Korean baseball players are pros, the play game well and they play it right. The best part though, is the cheering. Those fans get into it, but, they are also oddly respectful. When your side is up to bat, your fans all sing and chant in unison and the other side, the fans whose team is on defense, is respectfully quiet. One of the awesome, amazing, chants that took place on the red side of the park:

And here, so you can really tell how perfectly divided the stadium is by team affiliation, the white side, across from us:

Again, in case you forgot, this is what our view was during the game. This full on, family picnic. 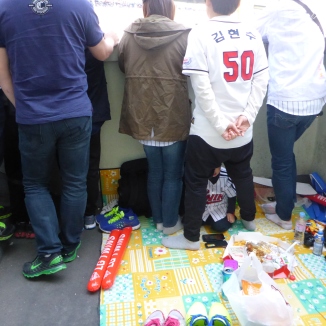 I just could not wrap my brain around it. Still can’t. At some point, Randi and I went out to the dugout store to purchase what would surely be some ridiculously cheap Korean baseball gear. In particular, I was in the market for a jersey. Since we were at both teams “home” stadium, there was a dugout store for each team, inside of which were jerseys priced just like they are in America. *sob*

Children’s jersey’s were less expensive, and they had some nameless ones available, as well as name decals that you could have pressed on to the back. I bought one of those for a little boy in my life. Still, it was expensive, but I had to get this kid something from Korea, and he loves baseball.

When we returned to the stadium, we noticed a BBQ (pronounced Bee Bee Que) Fried Chicken stand on the stairs, just past that random picnicking family. BBQ is one of the most popular/famous nationwide brands, so…you know, we bought some to try. And some beer. Dur. **I’ve been told since I posted this that is not actually BBQ, though the logo was the same-I dunno** 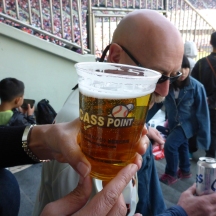 BBQ was unimpressive. Our beloved Uncle Ho’s, a local little spot by the Ramada, has BBQ beat, hands down.

That was our day at Korean baseball. Even if baseball does nothing for you, it’s a pretty spectacular experience to be had. Just be wise and get someone in the entry line nice and early before game time.