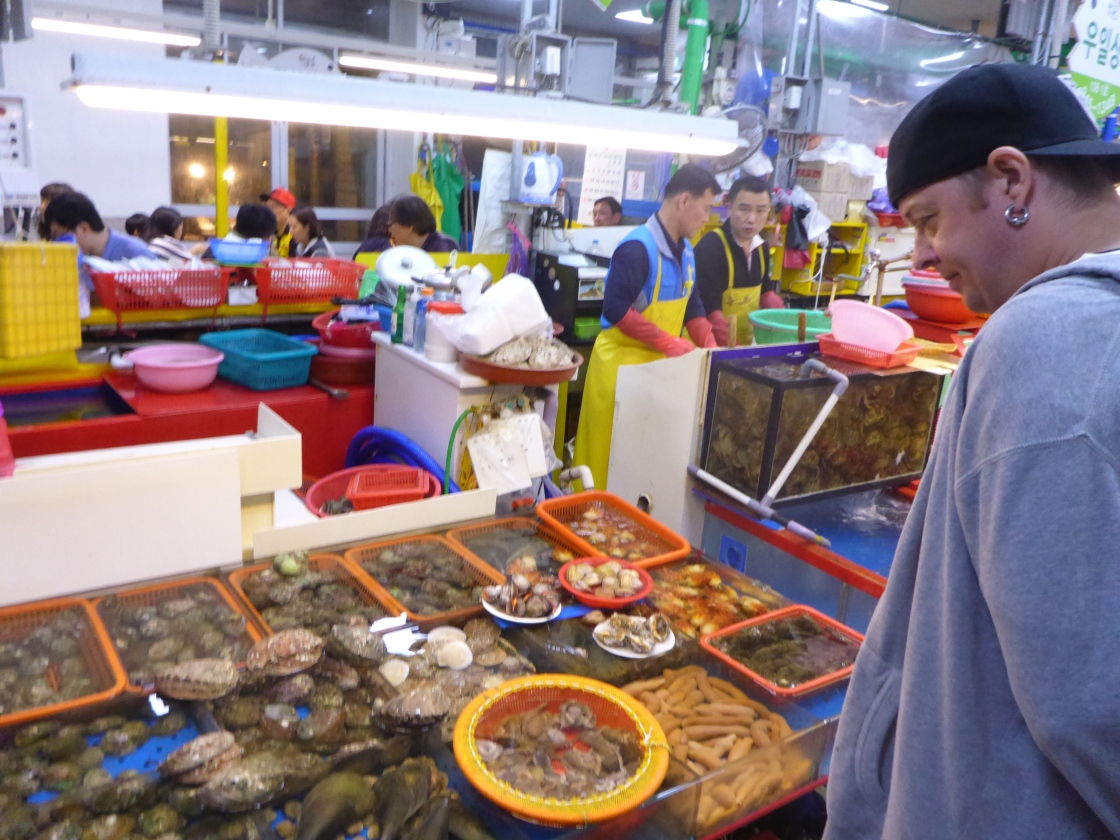 Busan: Chowing Down on Live Octopus at Jagalchi Fish Market

During the day, it was difficult to walk freely through the outdoor portion of Jagalchi market because it was so crowded. To be fair, it was a weekend, so perhaps that is not always the case. We briefly checked it out before we departed for Taejongdae, pushing through the maze of people and tents, then returned to it later that night, when things were much more calm.

When we got off the bus from Taejongdae, we crossed the street back over to Jagalchi (denoted by the large crab)

and grabbed a quick street food snack. It ended up just being a bland ball of carbs.

We went into the market at the entrance directly under the crab, where we were greeted with the muted late night hustle and bustle of the Jagalchi market.

It had seemed, in blog posts, like it was small. In reality it is anything but. The interior is probably the size of a football field. I knew going in that we would be able pick our own fish and have it prepared for us right on the spot, but I imagined that we would just have to walk and eat said fish, sashimi style, or find a restaurant somewhere in the building for a more involved preparation. I dunno. I was just confused as to how that would all work. Turns out, in addition to the incredible mass of fish-tanks, the interior is lined with row after row of bright yellow, fiberglass picnic tables. 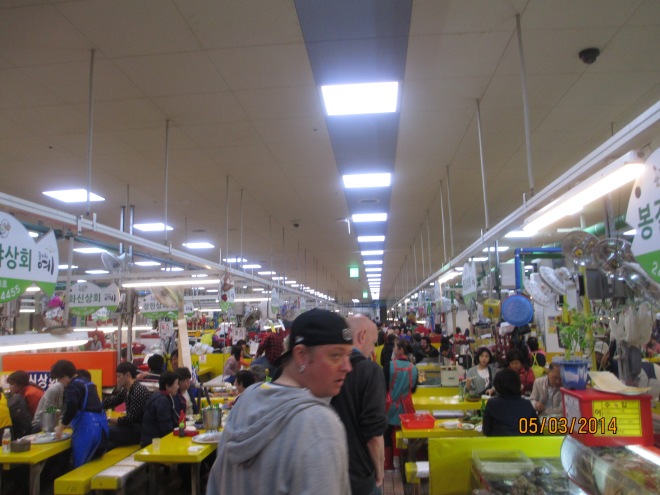 It’s insane to think about what the entire world pulls out of the ocean, when this one market, in this one town, in this one country was so gorged with its own supply. It definitely a visual to the issue of over fishing. There were tanks and baskets absolutely stuffed with crabs, shellfish, octopi, and fish. It was hard not feel like it was cruel. In some cases, enormous fish were laying belly up, in others, they were laying in a basket not much bigger than their body, and in others yet, they were packed so tight into a tank it seemed it would be impossible for them to move or breath. 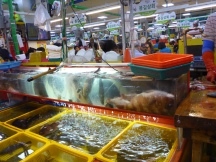 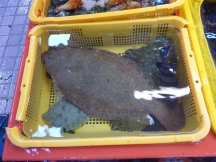 There were lots of friendly Koreans hanging out having a good time, eating their fresh fish and drinking, of course 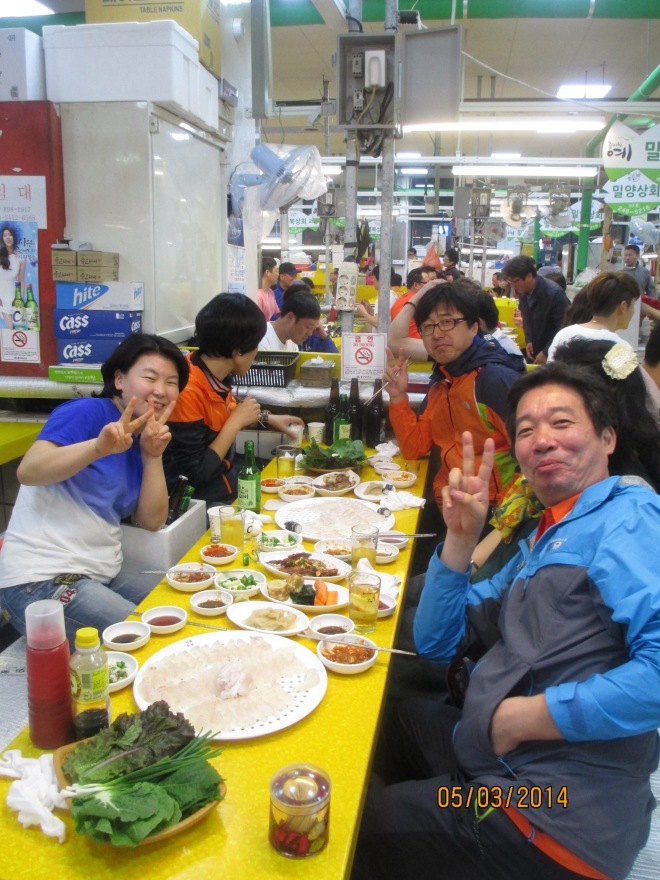 We grabbed a seat and promptly ordered live octopus. Those ladies are freaking savage with those poor creatures.

And then, we had the squiggling octopus again.

This octopus was markedly better than the one we had on our first night Seoul, as it was dressed with a little sesame oil and a little acid, which made all the difference in the world.

We also ordered some crab. Dungeness crab is such a way of life in San Francisco, that I always enjoy trying other varieties when I’m traveling. Not sure what species of crab this was, but it certainly hit the spot. This guys head butter was particularly tasty.

We passed by loads of gut buckets on our way out, it being the end of the night. The place was a bit of a mess.

And this poor guy, who was trying to make his great escape

We also observed a dramatic (and drunken, it seemed) fight and subsequent arrest, then we made our way outside to find that the exterior alleyways had calmed considerably. I was surprised to see that there were all sorts of little “restaurants” out there as well. They weren’t even visible to me through the mob that had been there earlier in the day.

We hopped the subway back to Haeundae, where we decided we needed to celebrate the midnight rollover to Mikey’s birthday with some more beer, magkeolli, and a bubbling caludron of spicy chicken’s feet. When we departed for Korea, we expected that we would be in a constant state of fire ass, due to the spicy cuisine. It’s no holds barred in Korea, we thought. The reality is, Koreans like sweet food, and spiciness is actually somewhat hard to come by. It surprised the hell out of me…things that wouldn’t normally be sweet or spicy had a tinge of sugar in them. I don’t think I tried one potato chip over there that wasn’t more sweet than salty. By the time we got to this restaurant, we had accepted this fact, so imagine our surprise when we got chickens feet that singed our tongues and made our eyes water. They were so hot in fact, they were borderline inedible for me. Borderline. I went to town on those things. 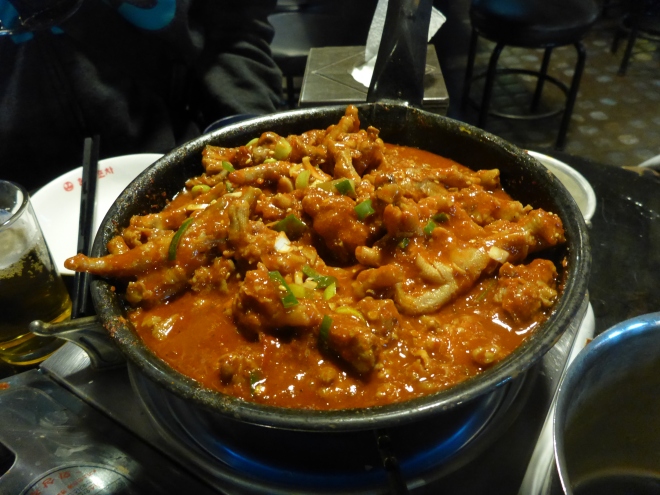 The problem is, I could not tell you the name of the restaurant. And it’s worth visiting for one, because of the fiery wings, but two, because it was a young Korean hotspot, bustling with late night activity, where we felt that we were eating with Koreans, like Koreans. These kids were pretty pleased to see us and cheers with us and we all did our best to communicate in some way. 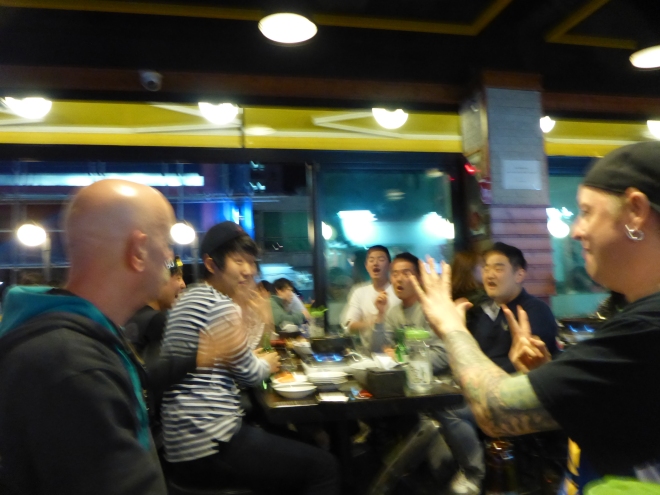 I know that this place is on the same street as the Haeundae market, on the opposite side. I believe it is sandwiched between a place called Pojang Macha, and another place that has a big red snail on its sign. Here, some interior shots that will hopefully make it recognizable.