Ajummas, a terrifying breed of Korean woman, are a force of nature that one must understand and revere, the way one would the stormy sea, or say, a crocodile. They are best known for their brazen and unapologetic rudeness and are said to have superhuman physical strength. Alarmingly, they are EVERYWHERE, commonly traveling in packs, dressed as though they are about to climb Everest.

This one here berated her…daughter? for an entire 30 minute subway ride. Like, it was a complete monologue of harassment during which she magically did not appear to take a breath. I assume the topic was the daughter’s unmarried status, and the family’s resulting shame, and let me tell you, the young one’s head stayed hung through the entire haranguing, with the occasional wistful rub of her ring finger and most certainly while she contemplated jumping on the tracks.

If there were a WWE for ajumma’s, and let’s be real, that would be AWESOME, this one here, “old purp,” as she has come to be known, would hold the heavyweight title. Our trip back to Busan began with a confrontation with her in the ferry terminal, wherein Mikey was pinned against a pair of locked doors by her luggage cart. When he tried to escape, she continued to assault him with the cart, shoving it into his shins repeatedly. He literally had to side step, his back pressed against the doors, to get away. Once he was gone, she parked her luggage there, blocking the door so she could be the first one through them once they were unlocked. What followed was an elbowing incident (me) and a near tackle (Randi) as she forced her way to be first through customs and off the ferry, then a near death tumble down the escalator as she thrust herself on with her luggage cart, facing the wrong direction. There were scowls. There were stares. There was Burberry. There was no backing down.

Back to the voyage to Busan. In the ferry terminal, we finally received a detailed tutorial on Japanese toilet usage, and saw an all-in-one wash and dry sink (why doesn’t America catch up with this awesomeness?). 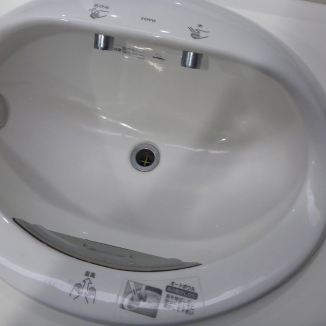 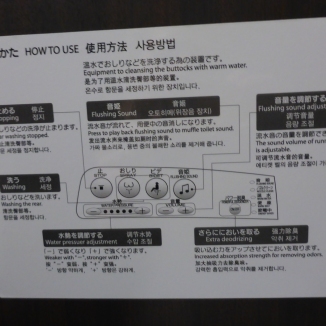 We sat and ate our various morning snacks from the Family Mart…some sort of soft taco (with Asian flavors inside), old faithful-the mixed media sandwich, and the most amazingly delicious popcorn nut mix. If anyone out there reads Japanese, kindly tell me the name of that stuff. I would love to track it down online. 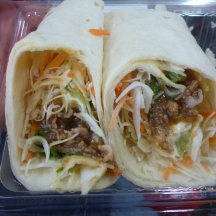 We arrived in Busan to once again have a cab driver (in the craziest disco cab) program our motel address in his GPS and then proceed to get totally lost, make a bunch of phone calls, drive in circles, reprogram the GPS, and then finally, try to drop us off directly on Haeundae beach, with all of our backpacks, (while acting as though that was our destination) because he couldn’t find our motel. A little tip…Haeundae station is basically around the corner from most of the love motels, so it would be wise to map the walk from the subway to your motel before you leave on your trip, then, when you experience the inevitable lost cab driver ride through the alleys, you can just ask for a drop off at the subway and walk yourself into the maze.

We argued, and refused to move, and eventually we found the S-one hotel, which ended up being directly across the street from our previous love hotel. This one really upped the craziness ante. We walked down domed, brick hallways into our enormous rooms which were decked out with big old hot tub baths, huge flat screens, two computers (with English keyboards) two sink areas, a standing fan and a ceiling fan (be still my heart!) a water cooler, a fridge, an ante-room with a doorbell, multiple crushed velvet couches, a wall of mirror…and on offer for the amenities? Well, one huge can of bug spray, condoms, a regular hairbrush and a round hair brush, hair gel, our beloved Korean face masks, plastic slippers, and sweet coffee sticks. We paid about $100/nt for this fabulousness, and were happy to do so. http://www.booking.com/hotel/kr/s-one-motel.html

Turns out, the Haeundae beach area is pretty fantastic when it’s not storming. There are lots of open air places to eat, lots of street food, a really cool market, and of course, lots of fried chicken opportunities. It’s a mellow and fun little beach town. 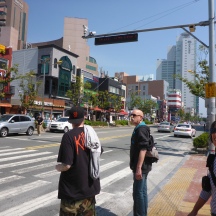 Having gone without Korean chicken for far too long, we beelined for the first available opportunity…this place:

It was just OK. The makgeolli had an antiseptic flavor, which is just how it goes with that brand, but it kinda sucked that there were no other options. The fried chicken was pretty sweet and syrupy.

Had we walked just a teeeensy bit further, we would have discovered Haeundae market where street food options abound. We did find it after our snack, and though we were full, there was no choice but to power on, each item being more delicious than the next. The market deserves a post all its own, and a post all its own it shall have.