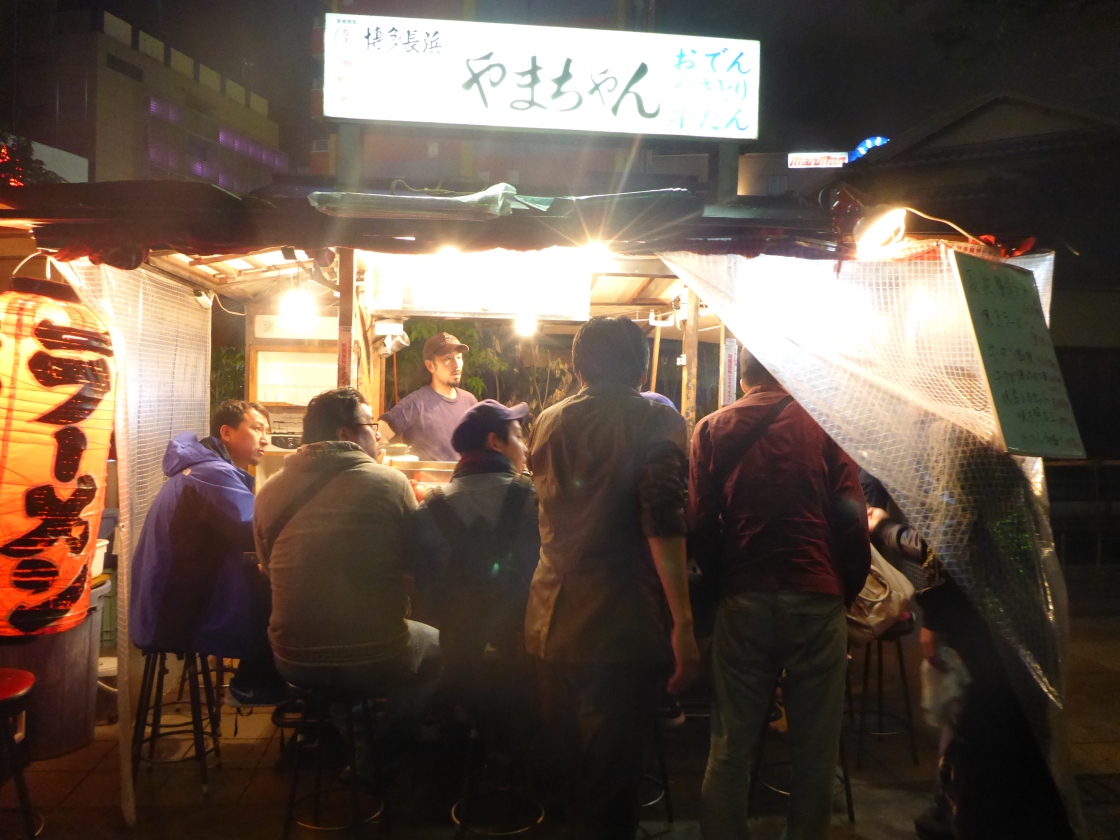 Japan: Whale, Mentaiko, and the Rowdy World of Yatai

The boys had wandered around Fukuoka, when us girls were showering or something. They discovered an adorable little sushi spot, about two blocks from the Sunline. We would visit it three times in twenty-four hours. I’ve walked there on google maps since I’ve been home, but it still doesn’t give me a name to give you, because the sign is still in Japanese. What I can tell you is how to walk there from the Sunline, and that the approximate address is 4 Chome-10-1 Hakata Ekimae Hakata-ku, Fukuoka-shi, Fukuoka-ken, Japan. From the Sunline, you would make a right when you walk out of the hotel, walk towards that main road, and make a right down the second road/alley you encounter. This restaurant is all the way down the alley, past the parking structure, at the first corner available. It’s the second place in from the corner, with the gray door, and it’s well worth a visit. 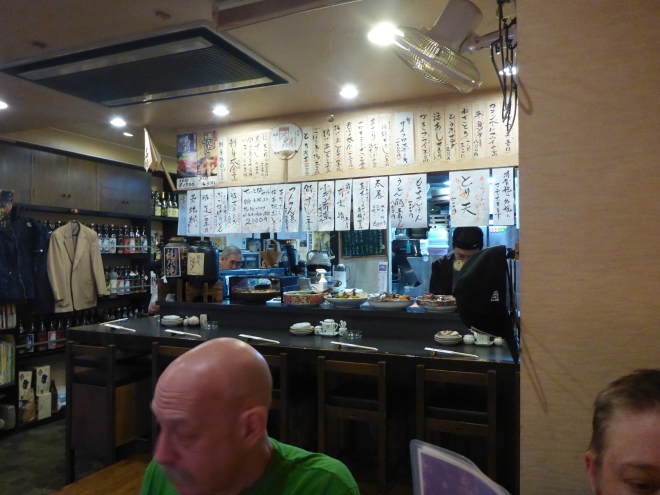 The restaurant is SO Japanese, in all the best ways. I’m sure we don’t even know the half of it, because we weren’t in Japan for very long, but still, from what we experienced in Fukuoka, it was totally legit. Most of the room is dominated by the sushi bar, which sits like a half rectangle around the open kitchen. Opposite the sushi bar is a wall of sake. There are only two tables in the whole place, perched over open holes in the ground. They are both four tops placed next to the back wall; I loved sitting with my legs in a hole in the ground with the wall behind me to lean on. It’s so comfy. We sat at the same four top in the corner of the room on every visit.

Another typically Japanese thing is to have hangers around the room, for people to hang their coats or sweatshirts on. When they are all being used a restaurant looks like a cross between an eatery and a closet, which to me is just super cute. 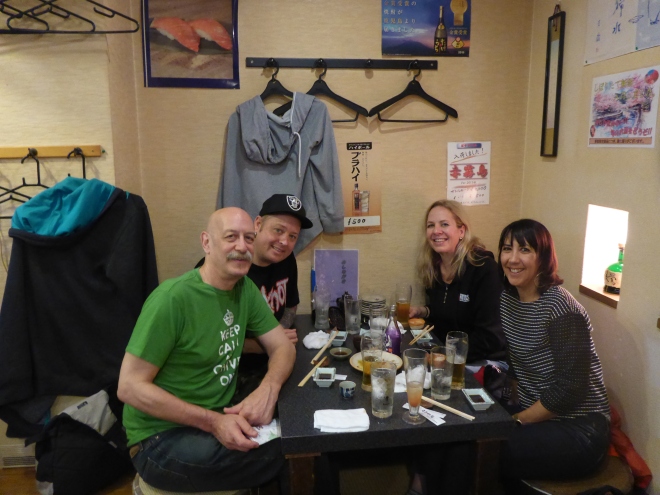 On our maiden voyage, we entered to find a very serious sushi chef, his very serious sidekick (who always wore a facemask, which made him look even more serious…and, a note on facemasks, they are all the fashion rage in Fukuoka. Chicks wear knit ones with designs on them on dates. I’m not kidding), one sweet, young server, and one darling woman, who was amused by us…possibly the sushi chefs wife. The sushi bar, on every visit, had big bowls of delicious looking prepared food on it, though we didn’t know what any of it was or how to order it.

Randi and I had watched a video blog about Japanese booze, and we were both obsessed with the idea of orangie cassis, and we saw it on the drink menu here, so we ordered it. It was boring, and at that point we finally gave up on the fruity Japanese mixtures and stuck with the straight stuff. 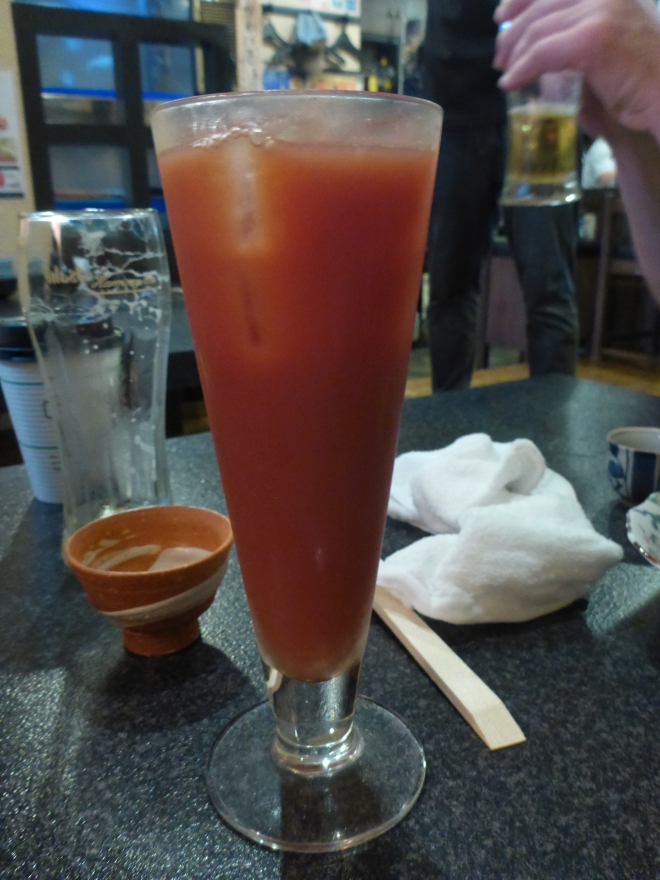 Our first order of business was to try whale. I know it’s controversial, but I didn’t go to Japan to experience American culture, I went to Japan to experience Japanese culture. I’m sure I don’t fully understand the issue, but from what I can gather, the only real reason people seem to take issue is because people like whales. So we ate some. It was my favorite of all of the “weird” things we tried on our trip. Of course, it was sliced perfectly so it was like butter in my mouth, but it also had a really iron rich flavor. I mean, the meat just looks like huge hunks of iron. 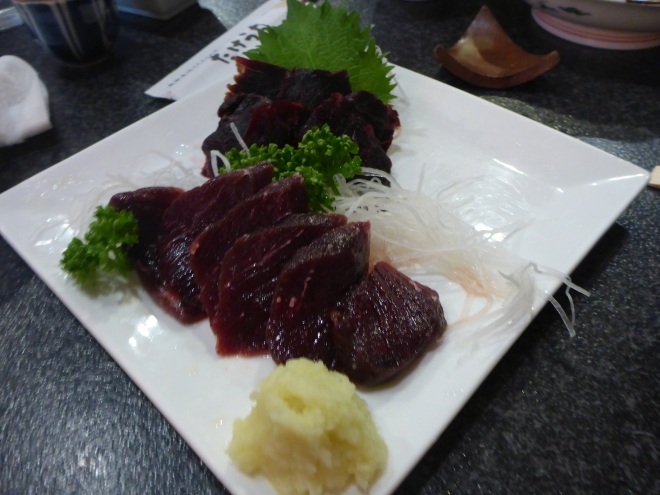 We also had the most fabulously delicious fried rolls, with a blistered won ton skin, stuffed full of hot, savory ground chicken mixed with ginger and garlic, alongside a tangy ponzu dipping sauce. We would order these again. 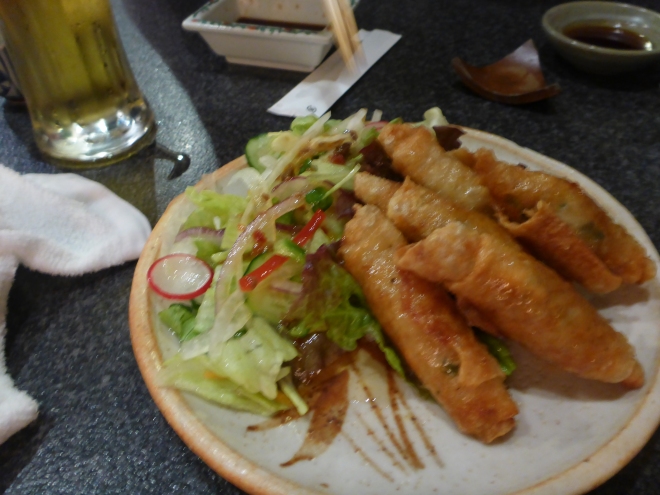 We asked our sweet young server (who was a Chinese intern, it turns out) for directions to the yatai. Then, to our surprise, the very serious sushi chef emerged from his post, armed with a magnifying glass, got on all fours on the ground and searched our map so he could aid in the giving of directions. I think we all pretty much fell in love with him and his cute as a button wife (?) at that point. 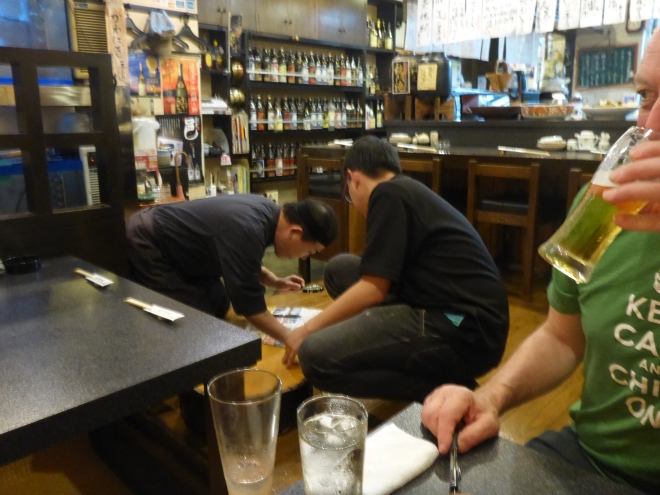 We grabbed a cab and showed the driver the spot the sushi folks had circled. We ended up getting dropped off basically in Tenjin again, and then fumbled about for quite a while until Mikey figured out where we were on the map and got us going in the right direction.

To my knowledge, the most famous yatai spot in Fukuoka is along the southern end of Nakasu island, where there are about twenty of them lined up along the water (however, the city has something like 150 total). They are food tents with about eight stools situated around them. Most have flaps that I assume are for bad weather days, and most have a display case featuring the type of cuisine on offer. They don’t all serve the same thing, and for us, it really didn’t matter, as we just had to find one with four seats available. They open at 6:00; it is advisable to get there early to get seats as they fill up rather quickly. Everyone is drinking, and snacking…the food is cheap, and the atmosphere could not be more convivial and raucous. Oh, and the guys manning them have a bit of ‘tude, or they did with us, but I think it was mostly because we don’t speak Japanese, and I can’t blame them for that. 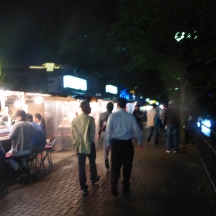 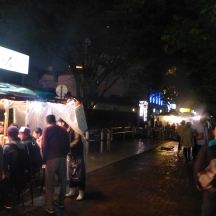 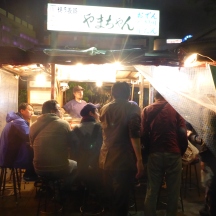 We had some difficulty ordering at the first one. The guy seemed like he was about to stab me as I gestured and flailed, then he just up and left. When he came back, he had his phone, which he gave to me so I could type in my request in English and he could hit translate. He was not so bad after all. 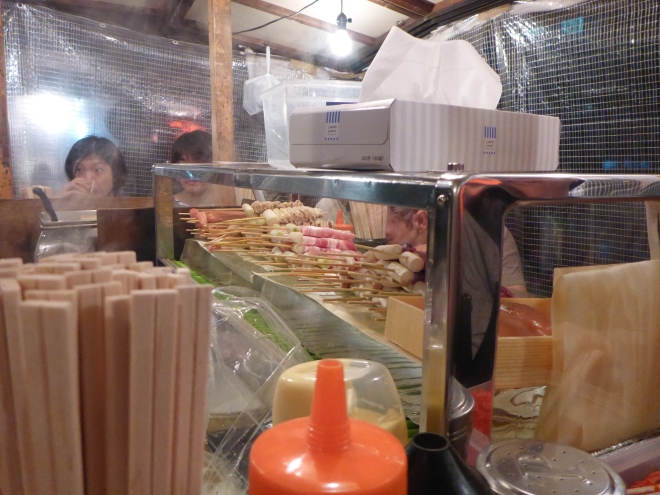 We started with a bowl of Hakata Ramen. It was not as good Ichiran (will anything ever be?) but it was still Hakata Ramen, far better than anything I’ve had in the states. 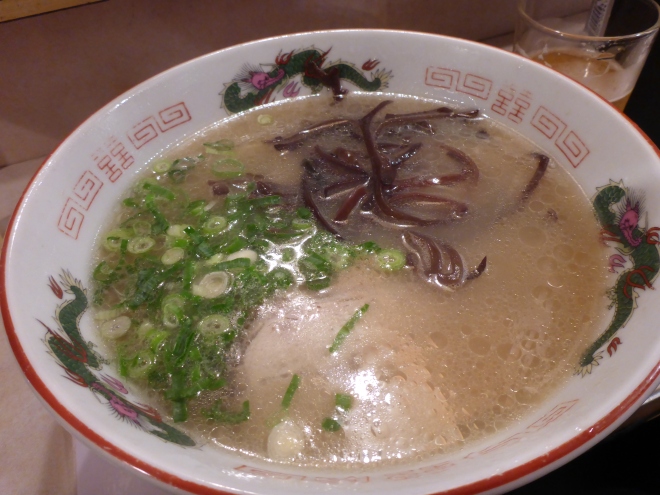 Another item on our list, and we were just chugging through that thing, having already had fugu and whale that day, was mentaiko. Spicy mentaiko is a product of Fukuoka…it’s a big hard slug of Pollack roe which was served in this case, lightly grilled. It’s very salty and it’s one of those foods that annoying picky eaters would say they don’t like because of that age-old bullshit excuse that it’s a “texture thing.” 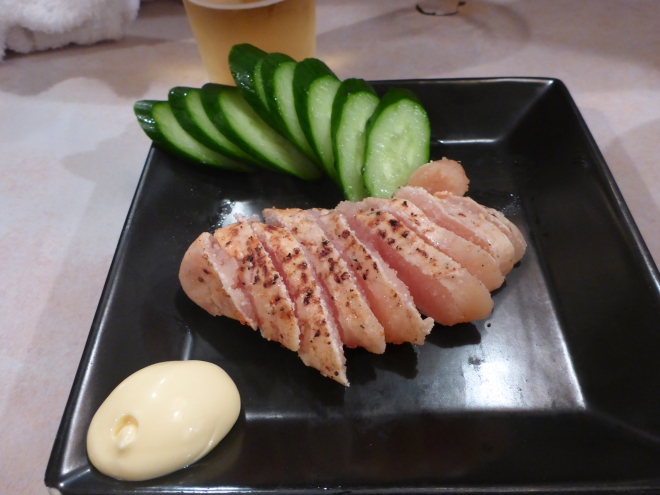 Next up were some yakitori skewers, which included a grilled hot dog (!) *love*. 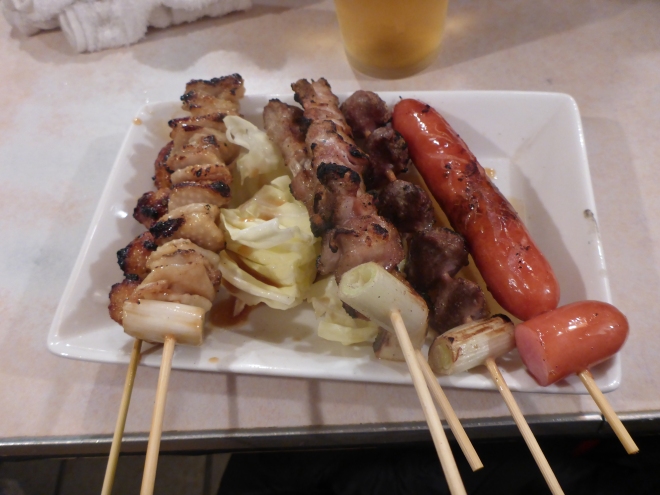 I have no clue what the last item was, but it was clearly their signature dish, as everyone in this yatai was eating it, so we ordered it, with a spirited “kanpai!” to the guys sitting across from us. It was some sort of fish cake served with hot mustard, and then this awesome vegetable (?) that was firm on the outside and really watery inside. 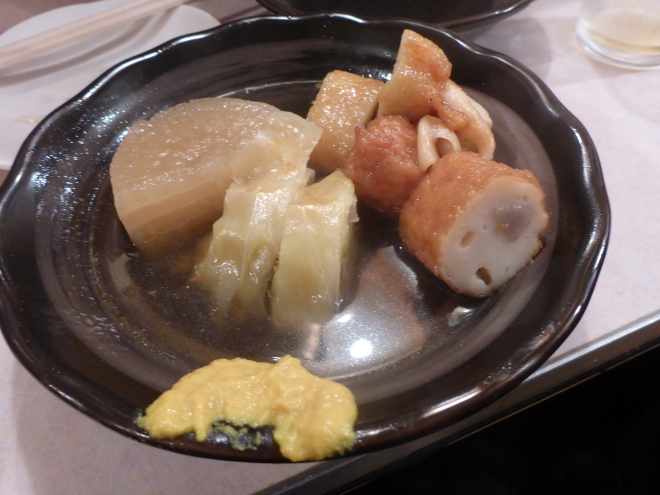 This stuff was the shit, justifiably a signature dish. This would be jake’s face after he ate it: 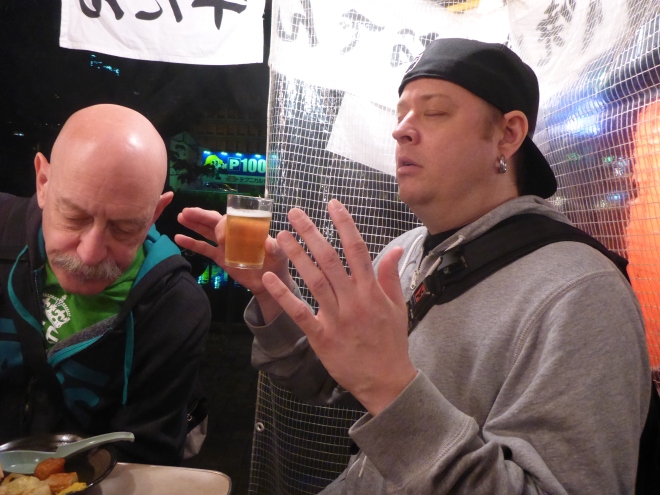 We moved on to another yatai then, one that was packed with young Japanese guys, and manned by one cranky old Japanese lady who again, ended up being as sweet as can be. We had a blast sitting there drinking with those kids, they had a blast using their English, it was super fun. 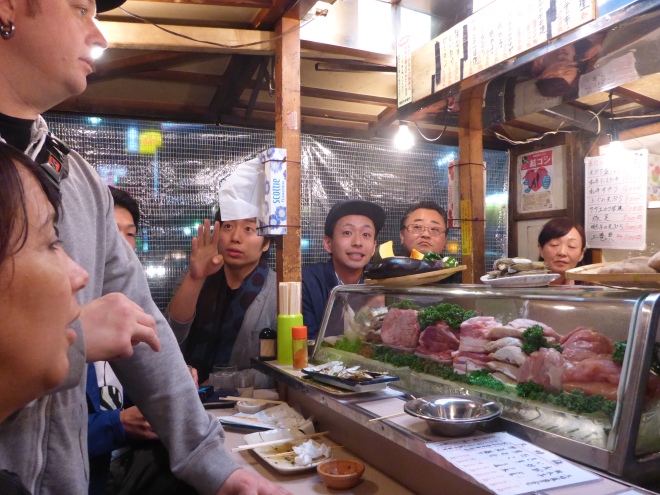 This yatai was more seafood centric. We ordered some delectable shellfish of some sort…a razor clam, I think. 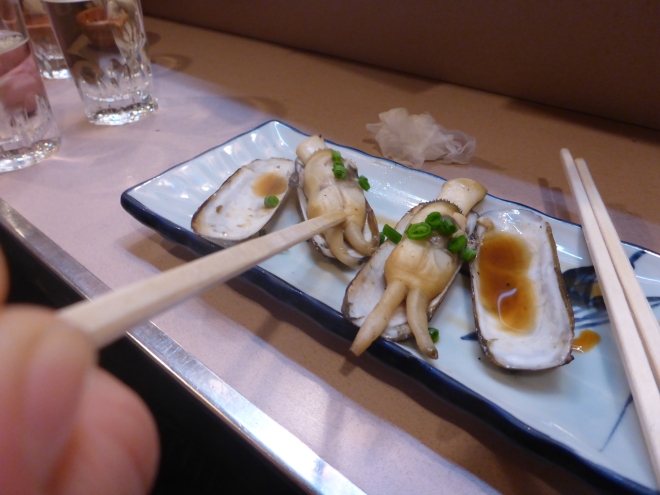 The star order here was this fish. I don’t know what it was but the skin was deeply carmelized, the meat sweet and savory, the inside absolutely chalk full of salty roe. I don’t think I’ve ever had fish served that way, all lousy with eggs, and for a salt lover, it was just divine. 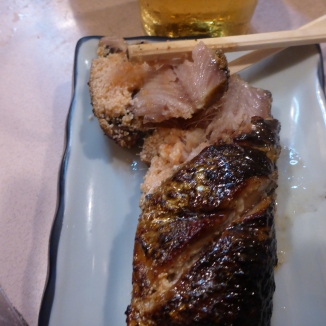 Being too stuffed to eat anymore, we reluctantly left the yatai. There was a stop at a convenience store bathroom, and yes, that flush button does make music when you hit it, for modesty’s sake. 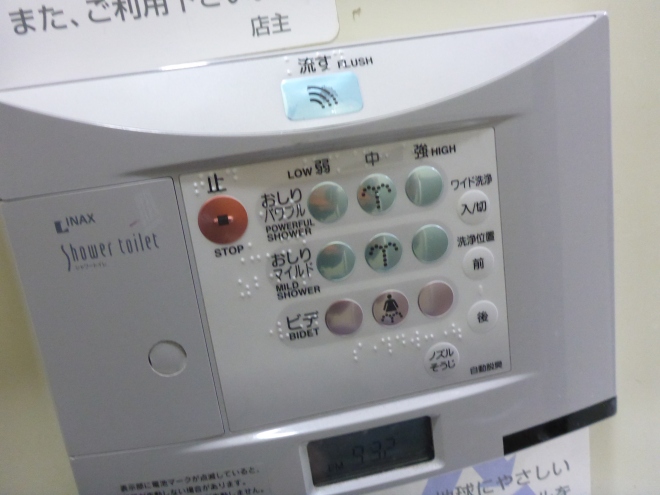 We discovered a Japanese grocery store where we explored the aisles, wide-eyed, taking in all that it was. There was a short panic as we lost Jake, but we were soon reunited and in a cab headed for our sushi spot.

We closed the night with a delightful order of tamago; sweet, eggy, and dense, served with a mayo based dipping sauce, along with some sake served in a grumpy old lady cup. 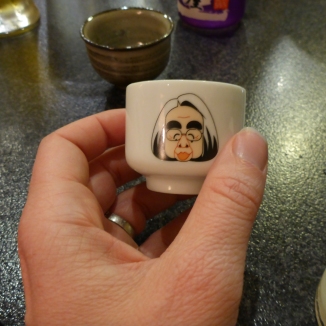 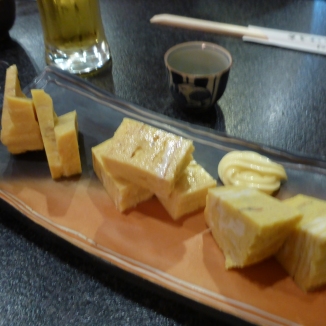