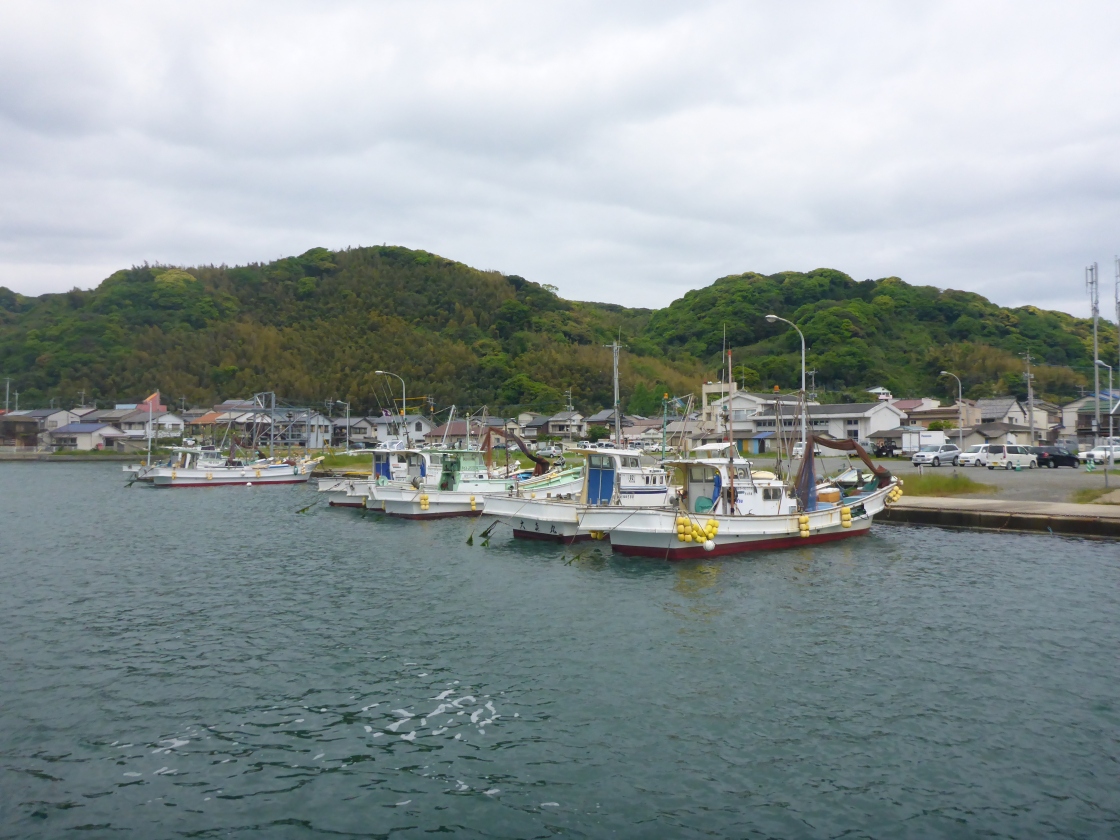 Shikanoshima Japan: A Tale of Enchantment

You know those travel moments, when something totally unexpected and completely amazing happens, and it becomes one of your most treasured memories? Our visit to Shikanoshima, a fishing island near Fukuoka, was one of those experiences for me. The day started with the kind of morning where we were all feeling cranky and none of us were on the same page. We discussed our options, none of us could agree on what to do, so finally, we bit the bullet and decided to ferry to one of the nearby islands, but no one was particularly excited about it. If I could go back and high-five us, I would. Awesome choice, guys.

The front desk explained that we had to catch a bus on the main road, for…$3 per person? then take it for about twenty minutes over to Hakata port. That all went swimmingly (nice clean bus, too, as you might expect).

It wasn’t totally obvious where to go when we got off the bus, but we just headed for the water and it soon became very clear.

The terminal was very quiet that morning, with food tents outside that were closed at the time, lined up along a walkway with lovely, bright, flower beds. Inside the terminal building we found a small and clean main area, with ticket machines dominating one wall. We fussed with one for a bit, even though there were English buttons, but eventually we figured it out and made our purchase which was somewhere in the neighborhood of $6/pp. 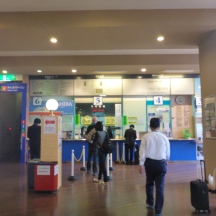 The terminal had all we needed to keep us comfy while we waited for our ride; clean bathrooms, gift/snack shops, a small restaurant, and even a large aquarium for the aquaphile in our life.

With about 45 minutes to kill we purchased some beers to drink with our morning snack spread, which consisted of an awesome cold noodle salad from the Family Mart by the hotel, my favorite mixed filling sandwich from the terminal, and an onigilliy which is basically the Japanese version of the gimbap. Just a note…if you are in Japan and you spot that cold noodle salad, do not hesitate, buy! consume! I miss those on an almost daily basis. They come with a dollop of mayo to mix in for creaminess, and there is a bunch of bottarga and cucumber involved so it’s all refreshing, and salty and a little crisp. They are the best. 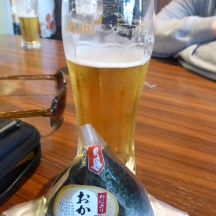 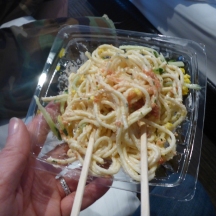 When the time came to board the ferry we walked outside to the pier, where there was a sign overhead with four numbered boxes. Each box had a list showing the specific islands that are serviced by that pier/dock number. It is quite user-friendly, though we still made the wrong choice and had to be guided to our boat, which had one other passenger on it. The ferry was a pretty sweet ride; the main room was like a lounge on a princess cruise ship with tables, booths, brass railings, and of course, the ubiquitous flat screen TV showing some sort of game show with young people and lots of cartoon sounds and overlays. 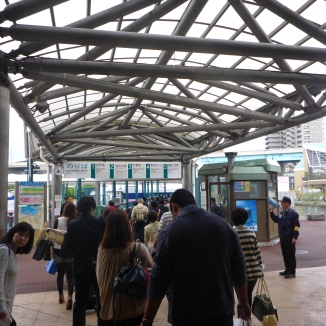 The journey to Shikanoshima took about thirty minutes, with a couple of stops at other islands along the way. Once we got there, we were greeted by bobbing fishing boats and a quite island full of lush green hills. It was really beautiful and serene. 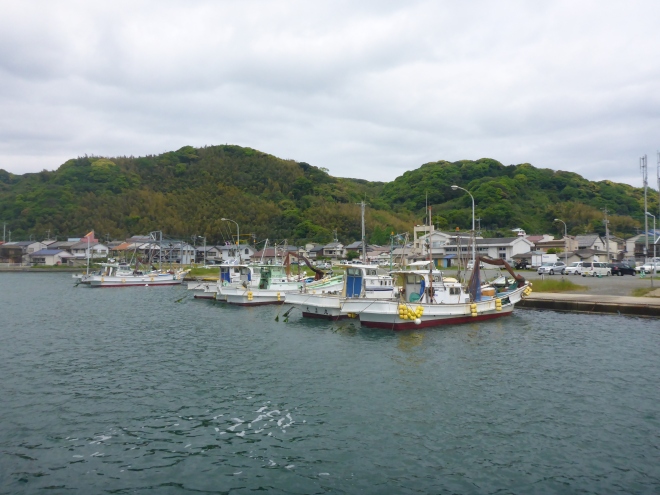 We walked through the small ferry terminal and emerged at a fork in the towns main road. There is a cartoony map there to help you make a decision as to where to go, but the island was so small and quiet, the first feeling in the crowd was that a) we made a lame choice, and b) whatever direction we chose was a crapshoot between nothingness and then, more nothingness. 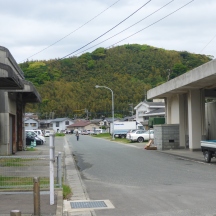 left turn out of the terminal 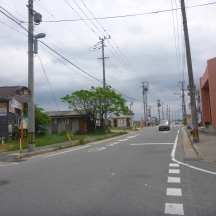 Right turn out of the terminal

Straight in front of the terminal

Having not yet noticed the map, we set off to the right, but after about an eighth of a mile it became clear that we were headed down a causeway (which the map later confirmed) to a beach. We reversed course, and saw that there were some people milling around outside a nondescript building that sat in a field across from the terminal. Since it was absolutely the only movement to be seen whatsoever, We headed over there and went inside to find a shop selling mostly handmade pottery. It was nice stuff, and I thought for a second that I might be making some great purchases, but alas, it was all shockingly expensive. 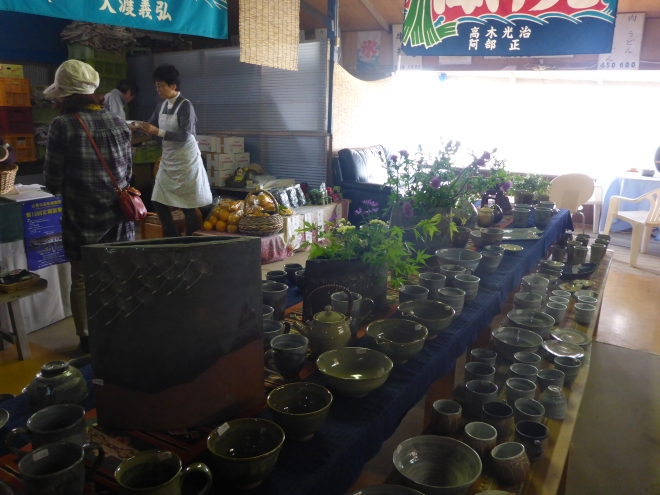 From there we walked down the road to the left direction from the terminal and found a small street with a few little shops. Shops is kind of an exaggeration. It looked like there was nothing open and it’s not like any of them were boutiques. 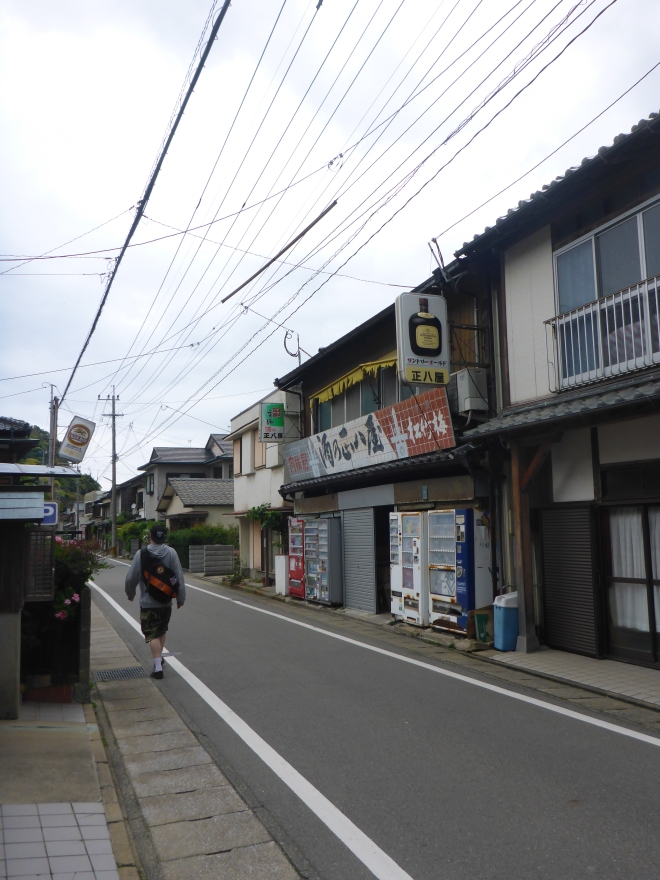 I think there was maybe one liquor store, one garage that looked like it might have a “restaurant” inside, and one tiny place where we could decipher that food was clearly being served, so we went in there.

This is when the magic began. This place was so tiny and quaint, with concrete floors, and maybe five tables, with an elevated bench along the back wall that had two low, tiny tables perched atop it, for the folks who wanted to remove their shoes and sit cross legged on the floor. It’s interesting, most places that offer traditional Japanese seating invariably offer western style tables as well.

The open kitchen gave us a view of the three women cooking and prepping, One of whom must have been in her eighties. They were clearly a family, and if I had to guess I would say they lived above the restaurant. We had no idea what to order, or what was even on offer, seeing as the menu was the traditional (and beloved, to me) hanging rectangular slats with Japanese characters written on them.

We were in the process of pointing at other people’s food to say we wanted what they had, when the young guy at the table next to us spoke to us in English. He helped us order the restaurants specialty, a shrimp porridge of sorts, served aside some enormous snails which I believe he said were indigenous to the island.

This meal was just heavenly. The shrimp porridge had such a heady mixture of flavors going on. I could identify some of it-seaweed, egg, mushrooms, prawns, but there were other ingredients involved that I’d never seen before. It was a unique dish, really not comparable to anything we’d had in the past, which made it that much more special for us. Those huge snails were SO meaty, and toothy, and dense, and they tasted like earth and sea at the same time, that liquid they are swimming in some sort of sweet soy concoction. It was a delight to just sit and soak in the ambience of this place. 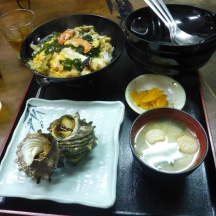 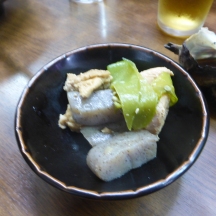 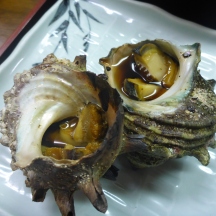 The whole experience was wonderful, from beginning to end, made better by the warning posted on the bathroom wall that we may get an unpleasant visit from a hot chili in the morning.

After lunch we walked through the narrow town streets, taking in the site of pretty little houses with their well-tended, flowered, front yards.. There is a definite pride of ownership in that community. Quite a few of them were topped with a traditional Japanese roof with the peaked black tiles. It was as charming as could be. 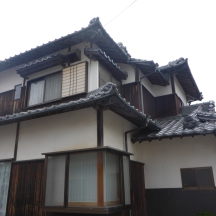 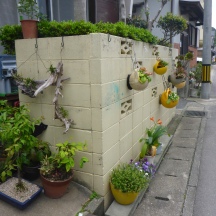 We ended up encountering this old, beautiful shrine that is spread in different locations all over a hill. I think the shrine is to the God of maritime safety, as the island was invaded by the Mongols, and while the towns people fought them off, they were dealt a final blow by a storm, or a kamikaze wind. Walking up there in the still green hills, the air a mix of salt water and woods, taking in the beauty of the shrine, was a wonderful and unexpected respite. We found sculptures, and huts, inscribed wood tiles, pagodas, ritualistic rinsing tubs, a small waterfall, and at the top of the hill, a sand labyrinth with a view of the towns rooftops and Hakata bay. There was also this amazing homage to the dead, or so we think; little Buddha like busts, with human clothing. Beanies, baseball hats, jerseys. It was really quite touching.

We must have walked for a good hour before we started our descent back into town. We encountered this tiny home based fish market, and I couldn’t help but think of how different life is there, where people clearly go to the local fish monger and buy whatever was caught that day (or catch it themselves) as opposed to having a smorgasbord of options from all over the world. Talk about fresh, organic, and local. We bought some fish from him, to eat on the ferry ride home, which he chopped up sashimi style for us.

As we got closer to town, a row of schoolkids, all dressed in green track suits and white baseball hats, walked single file down the other side of the road from us. They broke into a cacophony of “hellos!” accompanied by wild waving and toothy smiles as we yelled “konichiwa!!” back. They were so excited to see us and use their English and we were so excited to use our extremely limited Japanese. It was an awesome moment, one which I botched getting video of. Sigh. 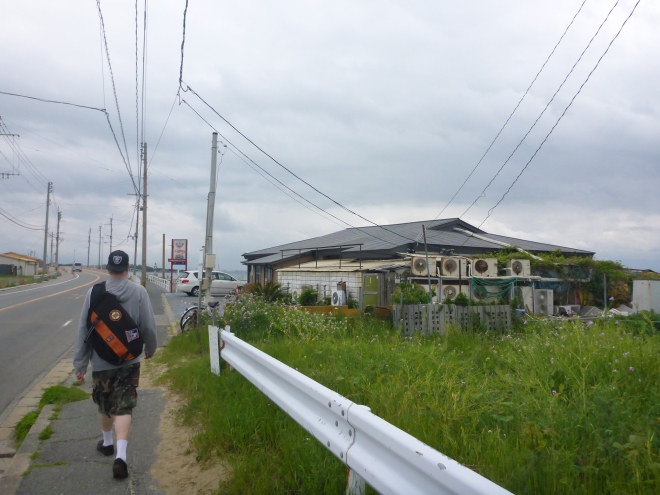 One side of the building is a store, selling all variety of dried and fresh fish, along with candy, refreshments, and other dry goods. We were spoilt for choice, especially with the dried fish options, and we made a few purchases before moving on to the attached restaurant.

A Japanese man sitting on the other side of the restaurant was eyeballing us, and finally, he asked in English where we are from. He became so animated when we told him San Francisco, and spoke to us excitedly about his trip to our city. The people of shikanoshima could not have been more friendly and welcoming than they were, every single encounter we had was a warm one. We ordered some fried…shrimp? Fish? 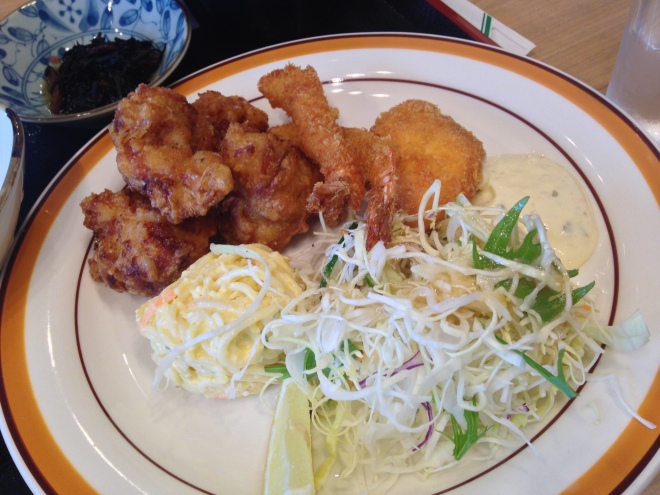 And then suddenly, an order of the crazy large snails showed up, unannounced, on a bed of salt, and it was on fire. Our Japanese friend sent them to us. We sent him a beer in return and then he came over to chat with us some more.

During that conversation he asked if we had tried the seasonal specialty, fugu. We were kind of beside ourselves when he said this, because fugu was high on the list of things we wanted to try in japan, and here it was, in this little fishing village and not in some sort of crazy expensive fugu restaurant, and not in some crazy expensive tourist trap. We were beyond delighted. I think it cost like $10. Yes!!! And, whaaaa??!!!

The fugu was actually pretty flavorless, but who cares. It’s fugu. That shit is 1200 times more poisonous than cyanide. Chefs have to endure two to three years of rigorous training and testing (with a 35% pass rate), in order to acquire licensing that allows them to prepare and sell it. None of us died, it turns out, but we were all pretty damn thrilled to have had the experience.

We hopped the ferry back to Fukuoka, where we ate our exceedingly fresh sashimi, still after glowing from our magical day on that incredible little island.