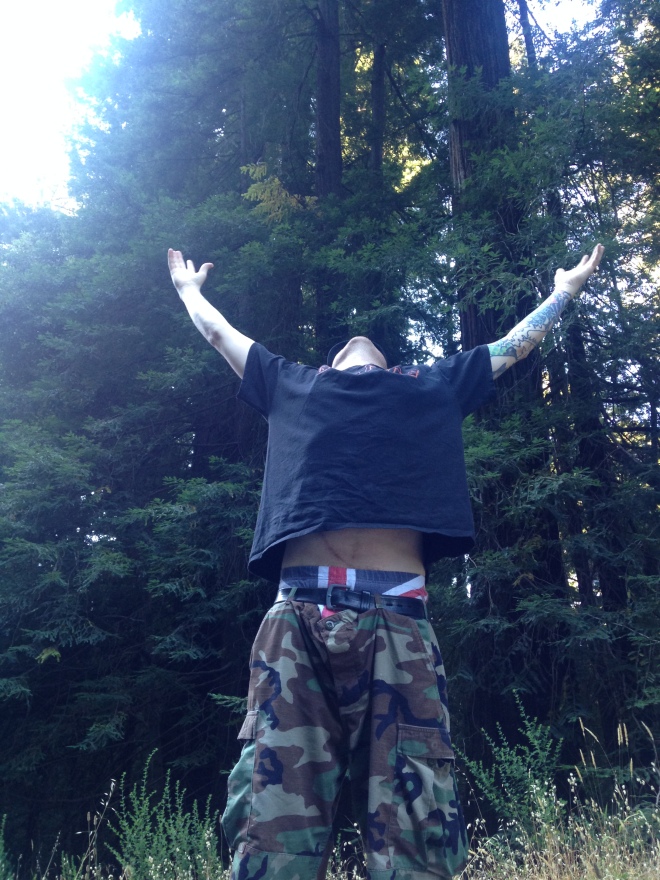 Road Trip, Arcata: Lunchtime at the Oasis, Dinner in the drunk tank

There is also some reaaallly beautiful Northern California redwood forest scenery and some pretty fabulous beer.

Randi’s son Max is a student at Humboldt state. We drove up to Arcata to bring him his converted camping van (yep). Logic would dictate that the drive from San Francisco should take about four hours (280 miles, divided by 80 MPH and the occasional pee stop=3.5 hrs) but the reality is, 101 North, between San Francisco and Santa Rosa, is a Godless stretch of road that will fuck you bloody, every. single. time. And so it was that it took Jake and I a whopping 2.5 hours to make it 55 miles. In this. 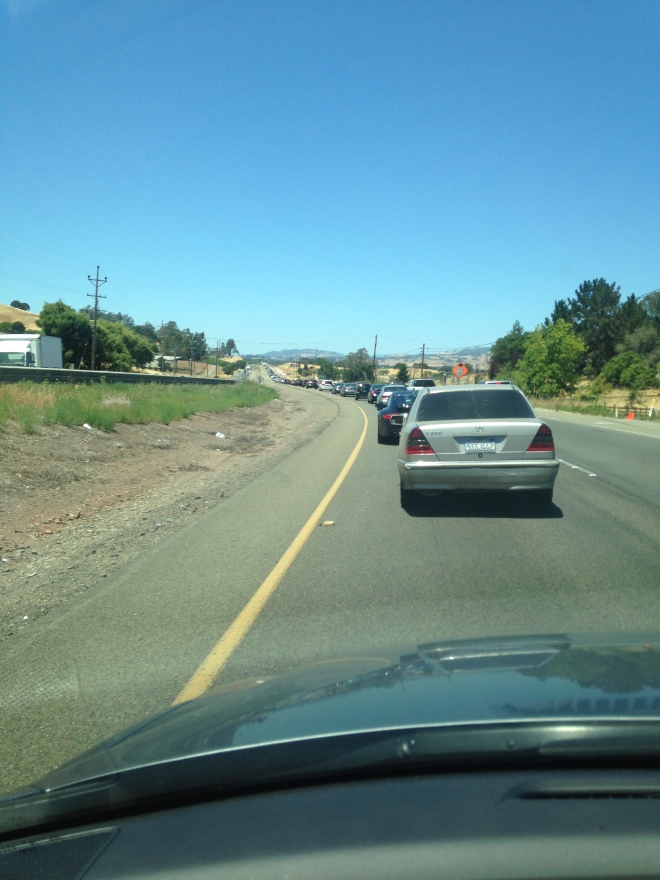 Which came after we slowly and painfully fought our way out of San Francisco and through the tourist traffic on the Golden Gate Bridge.

Should you ever decide to drive on 101 North of San Francisco, if you can help it, do yourself a solid and leave stupid early. Because otherwise, your fate will be the same.

We pushed through to the Railroad Station Bar and Grill in Cloverdale, about 32 miles north of where that traffic breaks. Cloverdale is a tiny town (pop 9,000), right where the landscape starts to get beautiful with grapevines and hills and trees. It was 95 degrees out, and let me tell you, a cold beer never tasted so good. 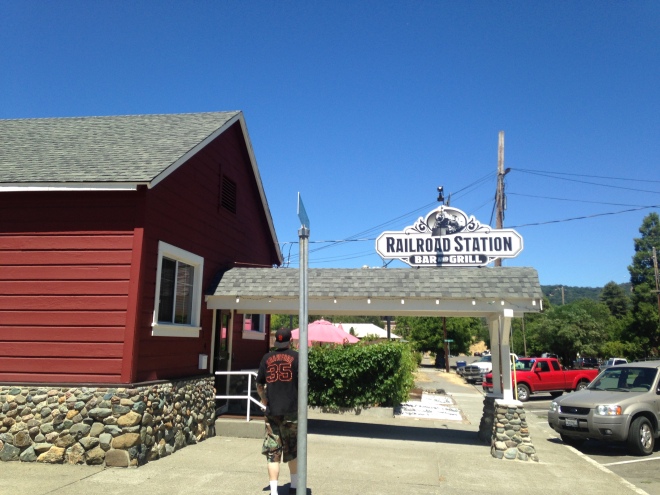 We were greeted by an airy bar, with a few TV’s and a few locals, hanging out doing their thing.

The local sitting closest to us was a really sweet guy who runs a skydiving company with his son (NorCal Sky Diving). The chef had just given him a dish to try, something he was working on, and he was kind enough to share it with us. It really kind of saved my life. 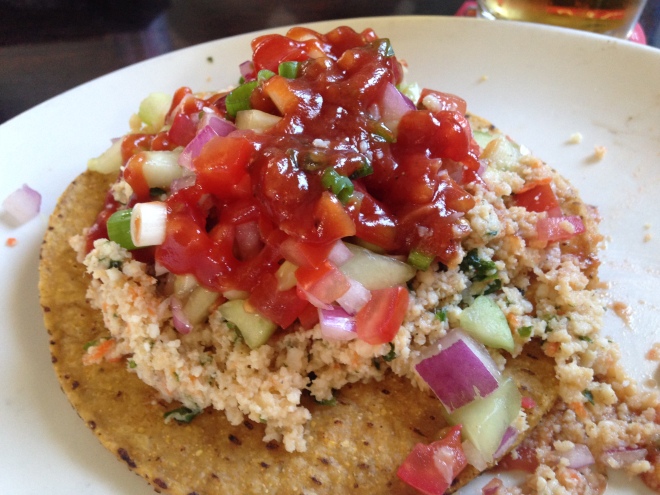 I was soooooo happy then. I had a cold beer, a fernet, and I knew I was in a place where they cared about what they were serving. This tostada was topped with cotija and maybe some ground shrimp. In the end it kind of tasted like a shrimp cocktail on a shell, with a little cucumber thrown in for good measure. It was perfect.

We also ordered wings, a chili cheese dog, and an order of fries. 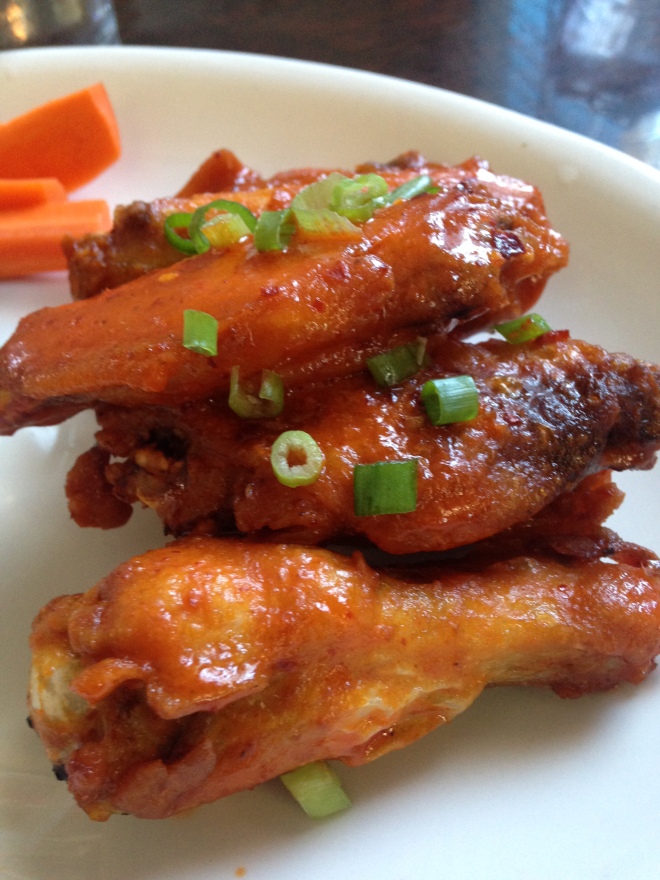 I like my wings crisp, with a spicy vinegar tang on the outside, and piping hot, juicy meat on the inside. Breading pretty much ruins my life, and if I don’t have a little Franks flavor, I’m pretty bummed. These were totally up my alley. 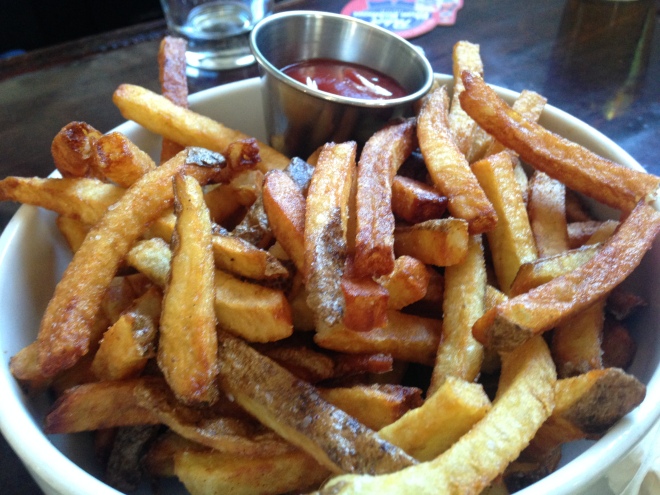 We were both impressed at the level of care that was put into our food. To find a guy cooking at a bar, in a tiny town, who clearly cares, when he really doesn’t have to, is refreshing. Our fries were hand cut, the chili homemade, it was just surprising. And nice.

The next 200 or so miles is a beautiful menagerie of Redwoods and mountains and, in the imagination of many, Bigfoot.

Downtown Arcata is just a square with a hunk of grass and some benches in the middle. Pretend homeless “punk rockers” hang out there and try to act tough and unique, as they mingle with the aforementioned dread locked white boys who try to act nonchalant and unique. The square is ringed with a bunch of shitty restaurants, most of them Italian with 80’s names and signs with 80’s fonts and food with squeeze bottle art all over it, for the visiting parents I’d guess; the rest of them, for the most part, being bars with fried food and burgers.

We went for drinks at Everett’s club, one of two or three bars located on the square itself. http://www.yelp.com/biz/everetts-club-arcata 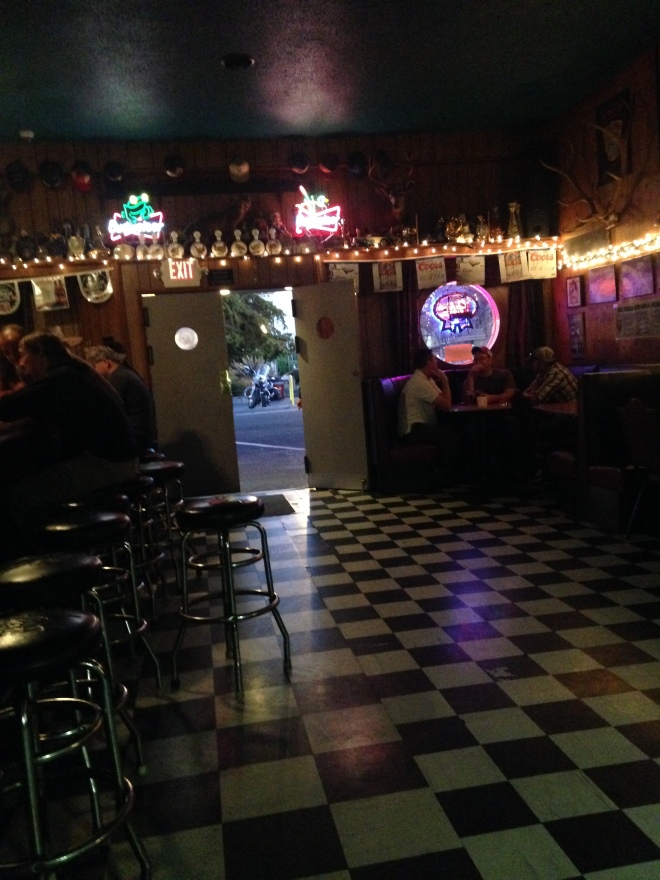 Everett’s is fine, and I prefer it because they have hard alcohol and if I remember right, the other guys don’t? I don’t know. But it was all good and fine, and it started to fill up with hipsters and climbers, who were innocuous enough until they weren’t, and I of course got stuck with the loudest, drunkest, douchiest, ass, perched next to me and elbowing the shit out of me, no matter how many times I adjusted my seat to give him more room.

So we left, and headed for Toni’s, a 24 hour diner with a pretty stellar reputation for serving some awesome greasy burgers. http://tonisrestaurant.com/menu

It was near midnight, and the place was full of stoners and drunks, of course. I can’t imagine the variety of nonsense the night crew at Toni’s has to deal with, but I’m guessing that once the drunks clear out, the meth heads roll in, and so on and so forth all night long. I’m sure it’s a nonstop revolving door of a fucked-upness. 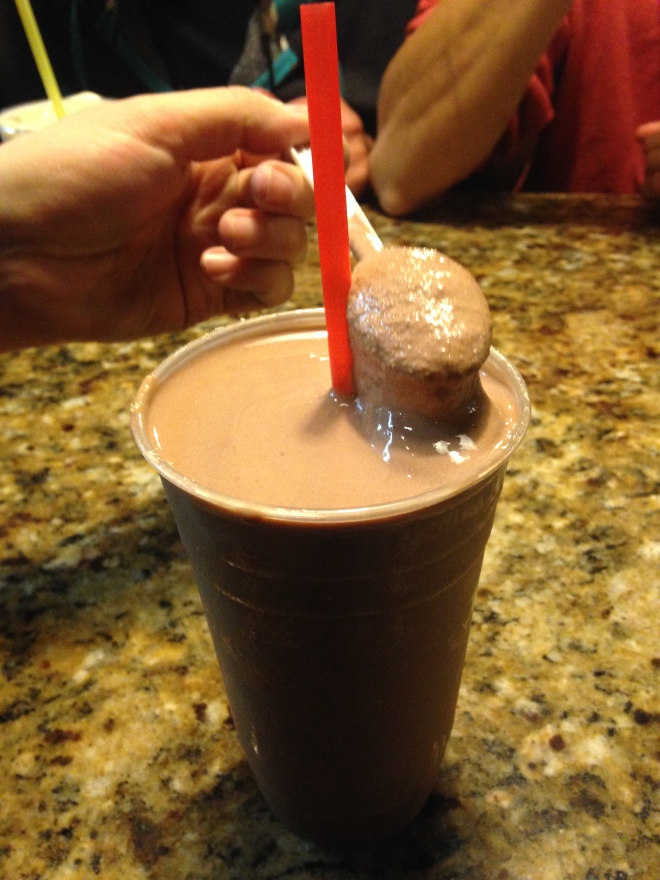 As our order indicates, we kinda had the drunk munchies. While our dining companions all had cheeseburgers, we had biscuits and gravy, pancakes with eggs and sausage, and a cheeseburger.

You know, maybe the biscuits and gravy sucked. Or would suck, to a sober person. But I wasn’t all that drunk, and I thought they were awesome. In retrospect, looking at them, I think they look that way too.

When I was in high school and college, Denny’s was the late night drunk food stop. And my order was the number five, or whatever, which was pancakes with scrambled eggs and that shitty, white-inside sausage on top. And I’d drown the whole mess in syrup. And so it went at Toni’s. 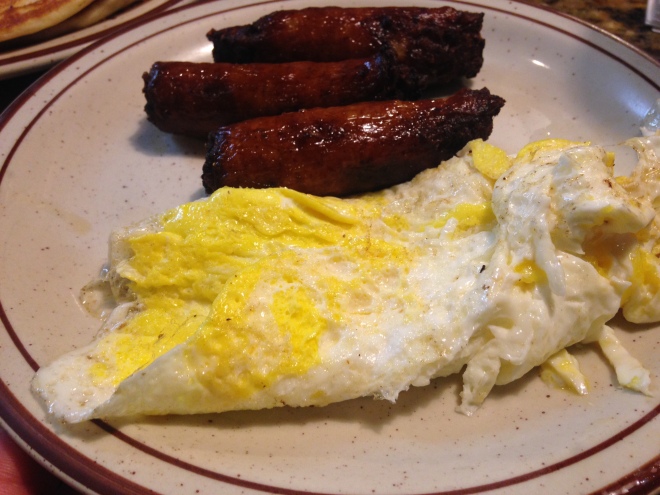 Look at those fat, crisp, brown sausages!! Holy God was I thrilled to see those when they arrived. They effectively distracted me from whatever is going on with those eggs. Are those scrambled? Did they just crack a bunch of eggs into a pan and then scrape and roll it into an “omelette?” I just don’t know what the heck the deal is.

They serve their thick, doughy (but definitely satisfying) pancakes with both maple and boysenberry syrup. I went maple all the way.

The kicker, and we finished it, was the greasy cheeseburger. I’m going back for one of those next time, absofuckinglutely.