Lunch in Japan: Fishing, Cheering, and Singing, Oh My!

Our first mission in Hakata was to go to Zauo, a catch-your-own-lunch restaurant with a large “lake” dominating most of the space, full of fish, on top of which sit two large wooden boats with tables on them.

I do realize the whole concept is kinda ridiculous, and I’m sure this place is like the Benihana of Japan, as there did appear the to be a couple of party’s there celebrating birthdays, but I found the whole thing irresistible and it was as much fun in person as it appeared to be in books and blogs.

Upon entering Zauo, the first thing you see are tanks full of squid. They are by the door for whatever reason. About one quarter of the perimeter is lined with tanks holding a variety of creatures from the sea, and if/when you do decide to fish (you don’t have to) the price adjusts depending on which tank you decide to pull from. In case you have any difficulty understanding the process, there is, of course, a cartoon menu to show you the way.

We chose to fish from the main tank, the body of water that was directly under our boat. While we waited for fishing poles we watched two little kids fish for their lunch, as did the party seated on the other boat. Everyone in the restaurant watched and encouraged the angeler at bat, and we all cheered for each side as they caught their croppy.

For those who prefer a more private fishing experience, there are these great private rooms that are tank level, circling the whole thing, so you can watch the fish swim by and when you are ready to devour one, you open your little screen and go fishing.

We got warmed up for our turn with a little tempura and sake.

Time to fish. Randi and I handed that task of to the boys, both of us feeling a little stage shy and freaked out by the prospect of actually catching a fish and then spazing and dropping it or flinging it into the dining area or something equally untoward. Sad, considering a three year old had just caught a fish behind us, but in fairness, that kid had been there fishing before, I’m sure of it. The boys were given a baited pole and a net (the thought of me having that net terrified me for the aforementioned reasons) while we manned the cameras. 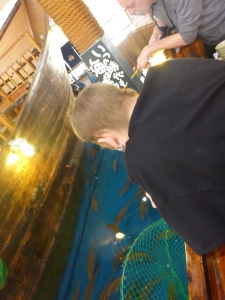 It only took about five minutes before success was had. Other tables watched us casually, ready for the American’s to snag a wiggler. It was pretty exciting when Mikey caught one, the whole place got involved with the yelling and cheering as Jake tried to get it into the net, which he finally did, and let’s just say I made the right choice being a passive observer. The fish was flopping all over the place and I totally would have geeked out and screamed and dropped it. 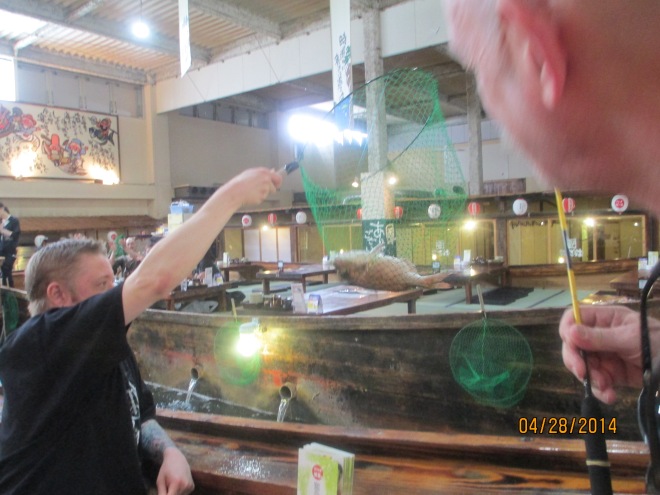 Our server came running to our assistance once the fish was netted. He asked us our names, and he was looking at me and Jake, so I said Katie and Jake, and by doing so, I inadvertently stole Mikey’s thunder. He took the net (with the still struggling fish flopping around in it) stood up, and bellowed an announcement in Japanese that included “Katie and Jake” (sorry again, Mike) then there were cheers, and then he ran off to a central platform where he started banging some big old drums while he sang a song. 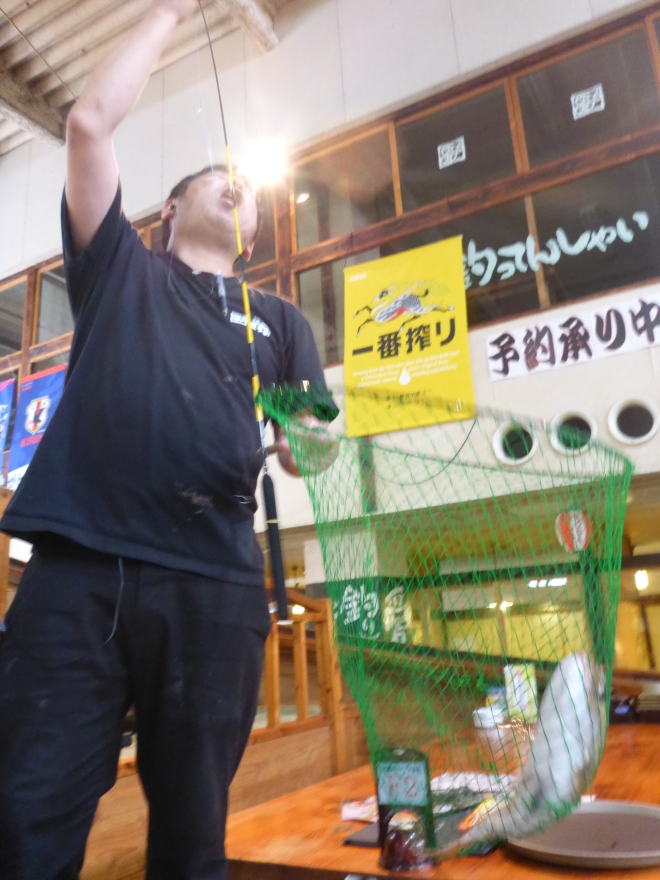 How awesome is that? It was just silly, stupid fun, but fun it was. Both boys looked all giddy after their catch and us girls were beyond delighted by the entire scene. Once our fish was submitted, we had to chose our preparation. The options are, sashimi, sushi, grilled, and then there were some fish head choices as well, so we opted for one of those.

The sushi was not amazing, but it wasn’t terrible either. It certainly wasn’t a moment of “oh my God I’m eating sushi in Japan and it’s changing my life,” (though that would come later). The fish head, however, was pretty spectacular. The marinade/sauce was a rich soy, ponzu (maybe a little teriyaki?) mixture, and the fish was wonderfully carmelized and sweet, and it had an interesting mouth feel, eating around all of those little bones. The eyes were particularly delicious. 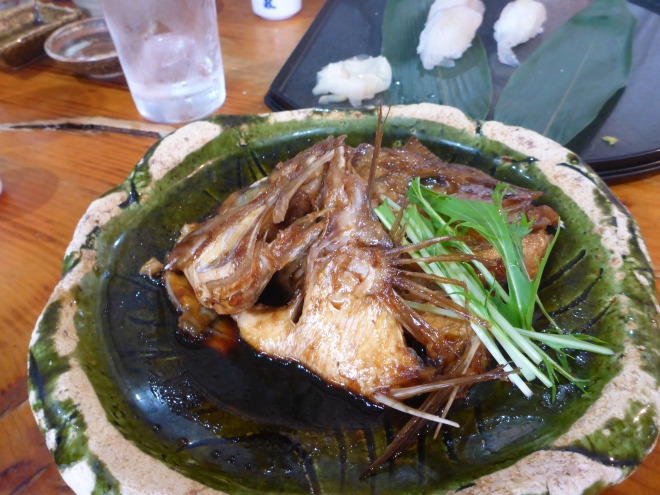 One thing us girls did not forsee, as we strapped on our adorable Korean socks that morning, was that we would be cruising shoeless in restaurants in Japan, looking like some real American jackamo’s. Something to keep in mind.